A short time ago our attention was drawn to a supposed error in our Urtext edition HN 28 of the ‘Six Partitas’ by Johann Sebastian Bach (BWV 825-830): it was maintained that in the Corrente of the first Partita in B-flat major the last left-hand note in bar 12 erroneously has a ♮.

Bach’s partitas were published by us more than 60 years ago, that is, in 1952 (edited by Rudolf Steglich, 1886-1976). Hence they have already ever so often been reprinted, complete with any corrections of errors that have become known in the meantime. In 1970 Steglich had reviewed the volume critically and written a new preface; in 1979, after the first-rate Urtext edition (by Richard Douglas Jones) had appeared within the New Bach Edition, our edition was once more gone over by our house editors, as Steglich was since deceased.

An error in such a Henle publishing-house ‘warhorse’? Hard to believe. An issue for paying a visit to our extensive archives of sources and music editions to check the evidence!

First surprise: Only since a reprint done in 1997 are we conveying this passage with a ♮, before then, always without. At that time a harpsichordist had contacted us to let us know that our edition had an engraving error here: it after all must read B♮. Thus, a comment contrary to what was current. My then colleague carefully checked on the situation and, as it happens, then decided for the correction, though adding in the Critical Report the important proviso (and the circled ‘1a’ to be seen in the above): ‘The ♮ at the last note is not in the original print, but in an old copy.’

It is a fact that this natural sign is not actually in any issue of the ‘original print’ of 1731, not even in the later issues of this beautiful, but quite imperfect print. 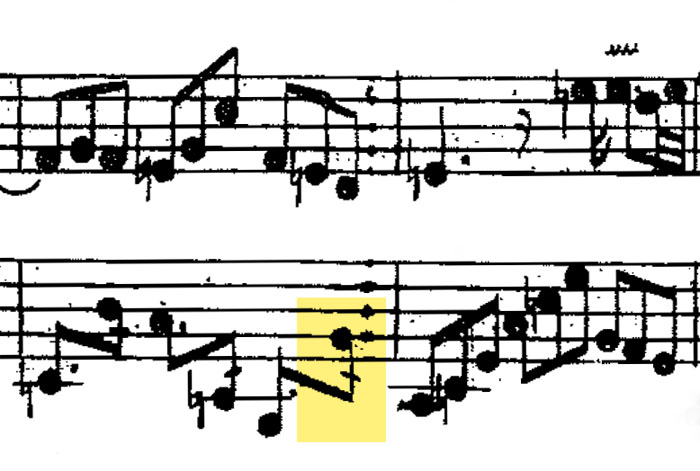 It is a fact, furthermore, that the ♮ turns up in a copy from the 18th century. The source, though, unfortunately has no authority of any kind; on the contrary, the New Bach Edition describes this copy, known in the Staatsbibliothek zu Berlin under the siglum ‘P 215’, as ’corrupt’, meaning that occurring here are notes and signs having nothing to do with Bach.

Second surprise: The vast majority of 19th– and 20th-century editions have, contrary to the original-edition source, this portentous ♮:

–         the edition by Busoni published by Breitkopf & Härtel (1918) contains the ♮, but interestingly enough, with ‘(♭)?’ placed questioningly underneath;

Without an accidental, but with B flat here at this passage, are, according to my knowledge:

–         as well as the edition of the Associated Board of the Royal Schools of Music (1981), here even with the advice: ‘The ♮ to the last note, found in some modern editions, is not in CE [= Originalausgabe 1731] and seems unnecessary.’

So, what next? Well, to the piano to try out the passage in both variants: The B♮ sounds absolutely convincing. One of the typical Bach so-called springboard leading tones, supporting as well the discernible, characteristic secondary dominant to the following C major. The B♮ is literally, intuitively played. Or? Played without accidental, thus B flat, the passage initially seems strange, but certainly not wrong. More frequently played it develops its own charm, because it is understood – assuming Bach really intended B flat and not B♮ –, that the sound of the 7th above C has already been arrived at, indeed to be brilliantly, exhaustively elaborated in the following bars (not until bar 18 are we again in F major).

Third surprise: In practice, thus at full ‘Corrente’ tempo (not ‘Courante’, as in many old editions!) the passage is almost inaudible. It simply goes by too fast. The triplet-quaver in question lasts a blink of an eye and at that is on the most unaccented beat in the bar! I have calculated that one bar played at the right tempo lasts about 1 second, the crotchet beat thus about a third of a second, a third of it in turn lasts about as long as our triplet-quaver – so the note sounds for no more than a tenth of a second or a decisecond!

Still, whoever listens carefully, recognizes that most pianists/cembalists play B♮, at any rate on the recordings I happen to have at hand (there are 5). Thus, even András Schiff in his – to my mind – standard-setting live recording with ECM. If I am not hearing wrong, though, Claudio Arrau and Trevor Pinnock play a B flat.

Dear reader, aren’t you perhaps asking if any case the note can still not be heard because it goes by so fast, and the difference is only a matter of a semitone which is in either case musically correct, why are Henle publishers making such a fuss about it? At this, the answer must of course be that for philologists like us (and, I am certain, also for all serious musicians), it doesn’t matter whether it is an ‘important’ thus prominent note, or whether it is an entirely ‘unimportant’ passing tone that flies by in a tenth of a second – we simply want to know which is the ‘right’ note.

In the case of the decisecond B♮ or B flat, though, I’m not so sure now. What do you, valued reader, think?