Many piano students are not going to believe their eyes when they read the indication una corda (= one string) in their music: 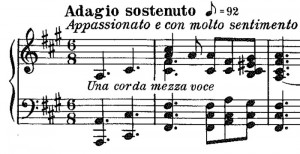 You’d think that you were back in the period of John Cage and his prepared piano. Because how in the world is a player supposed to choose one string amongst the 1–3 strings activated by each key and get it to sound?

Granted, only a few who have thoroughly devoted themselves to their instrument would be so naïve. Una corda requires the deployment of the left pedal, the ‘soft pedal’. Anyone who has ever trod on the left pedal of a grand piano will know what effect to expect: the keyboard together with the whole striking mechanism is shifted just a bit to the right whilst the strung body of strings stays, of course, in place. So this is how it happens that the little hammers no longer encounter all their allocated strings, but now only the one – thus, una corda. (On upright pianos una corda is only possible in the metaphorical sense: there, for it to be dampened or muted, the path from the hammers to the strings is curtailed). The grand piano now sounds not only piano, but also fainter and softer, a change in sound colour that many composers have deliberately exploited.

Time and again though in the history of notation, the terminology for using the left pedal has metamorphosed. Una corda is the form that we encounter most frequently. Beethoven repeatedly made use of this notation. In his late sonatas he applies the sound effect as a feature of his composition. In Op. 101 he makes use of the Italian and German form: 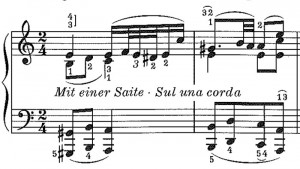 Even the place where the left pedal is to be released again is indicated precisely, usually with tre corde or tutte le corde:

Beethoven even went a step further, however. On occasion, he stipulated raising the left pedal so gently that only bit by bit are all the strings sounding again, that is, only two initially and ultimately all three again:

Robert Schumann also often marked the spot where the left pedal was to be applied. For this he used perhaps the clearest term, mit Verschiebung or ‘displacement’, involving the notion that the planes of the strings and hammers are being shifted or displaced against each other to achieve the dampening effect: 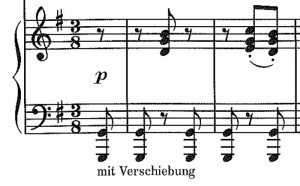 Just about the clearest – imaginable – designation for the left pedal, con sordino, causes though a bit of confusion. In Scriabin’s 1st piano sonata, the first edition, also the only source, uses the term una corda 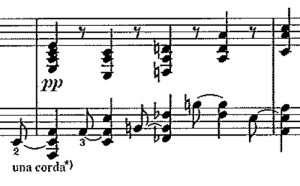 as well as con sord. 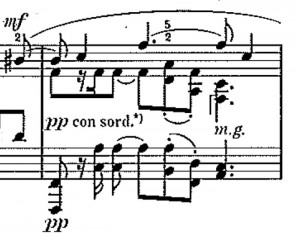 Most likely, yes! Nonetheless, we hesitated a moment whilst preparing the edition. Did Scriabin differentiate perhaps deliberately and intend two different effects? Again, a sideways glance at Beethoven is advisable. He opens his ‘Moonlight’ sonata with the performance directive senza sordino, hence not intending, say, ‘without the left pedal’, but on the contrary, ‘with the right pedal’. Beethoven is describing what happens mechanically when the right pedal is trodden: the dampers are lifted from all the strings, which is why the tones struck linger on, playing so to speak ‘without dampers’. Is Scriabin implying with con sord. that the passage in the 1stmvt., mm. 67 ff., is to be played ‘with dampers’, thus ‘without the right pedal’? Prof. Michael Schäfer, who is closely attending our Scriabin editions, pointed this passage out to us and reported that actually he always plays this passage without the right pedal – a damped, dry sound is probably exactly what Scriabin had in mind.

Anyhow, pertaining to con sord., just like una corda, mit Verschiebung or II. Pedal (thus, in Busoni’s transcription of the Bach chaconne), is the usage of the left pedal. To forestall confusion of all sorts, we have indeed decided to adopt invariably the indications selected by the respective composers, though translating them in a footnote for pianists of our day: 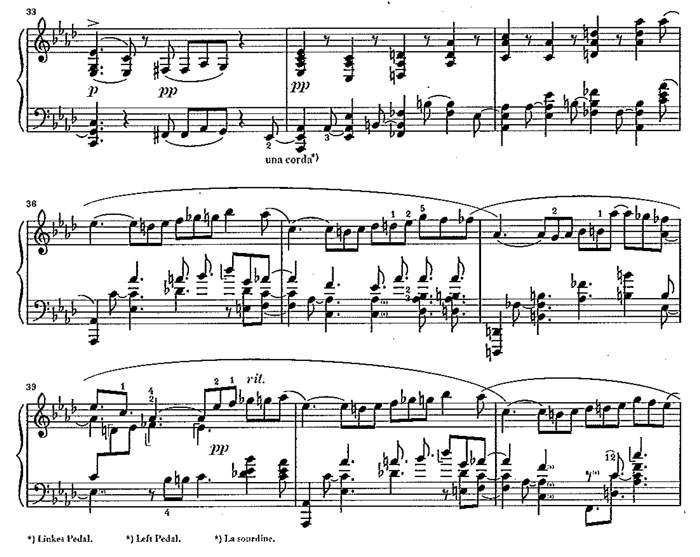 Are you wondering about unambiguous attributions? Do you know of other interesting or problematic passages? Then please write and let us know!