The German art song does indeed famously enjoy great popularity, and not only where the German language is spoken. And so, time and again, where there are lied editions with German texts, the question is whether to include a translation of the poem for the international market, or even when possible to underlay the song text in other languages. That such considerations did not come up only with the “global trading” of our time, but that publishers of 200 years ago were already worrying about it, can be seen in the example of Ludwig van Beethoven’s Adelaide.

Your friend is wandering lonely in the spring garden,
Softly surrounded by sweet magical light,
That vibrates through swaying blossoming branches,
Adelaide!

In reflective waters, in the snowy Alps,
In the golden cloud banks of the sinking day,
In the starry realms your likeness radiates,
Adelaide!

Once, o marvel! A flower blooms on my grave,
A flower out of the ashes of my heart,
Clearly shimmering on each crimson petal:
Adelaide!

Beethoven had already had his Adelaide published in 1797 by Artaria in Vienna with a dedication to the author of the text, Friedrich von Matthisson (1761–1831). Why then it took him three years to send the very popular poet a copy of the edition, he himself could not properly explain in his covering letter to Matthisson. But in August 1800 he begged the “most admirable one” so much the more warmly to accept his presentation now “as a token of […] my gratitude and high regard for the blissful enjoyment your poetry always absolutely gives me and will yet give me”. Matthisson in turn seems pleased at having encountered the setting – even though presumably he hardly recognised his Adelaide again in the Artaria edition bristling with orthographic errors. 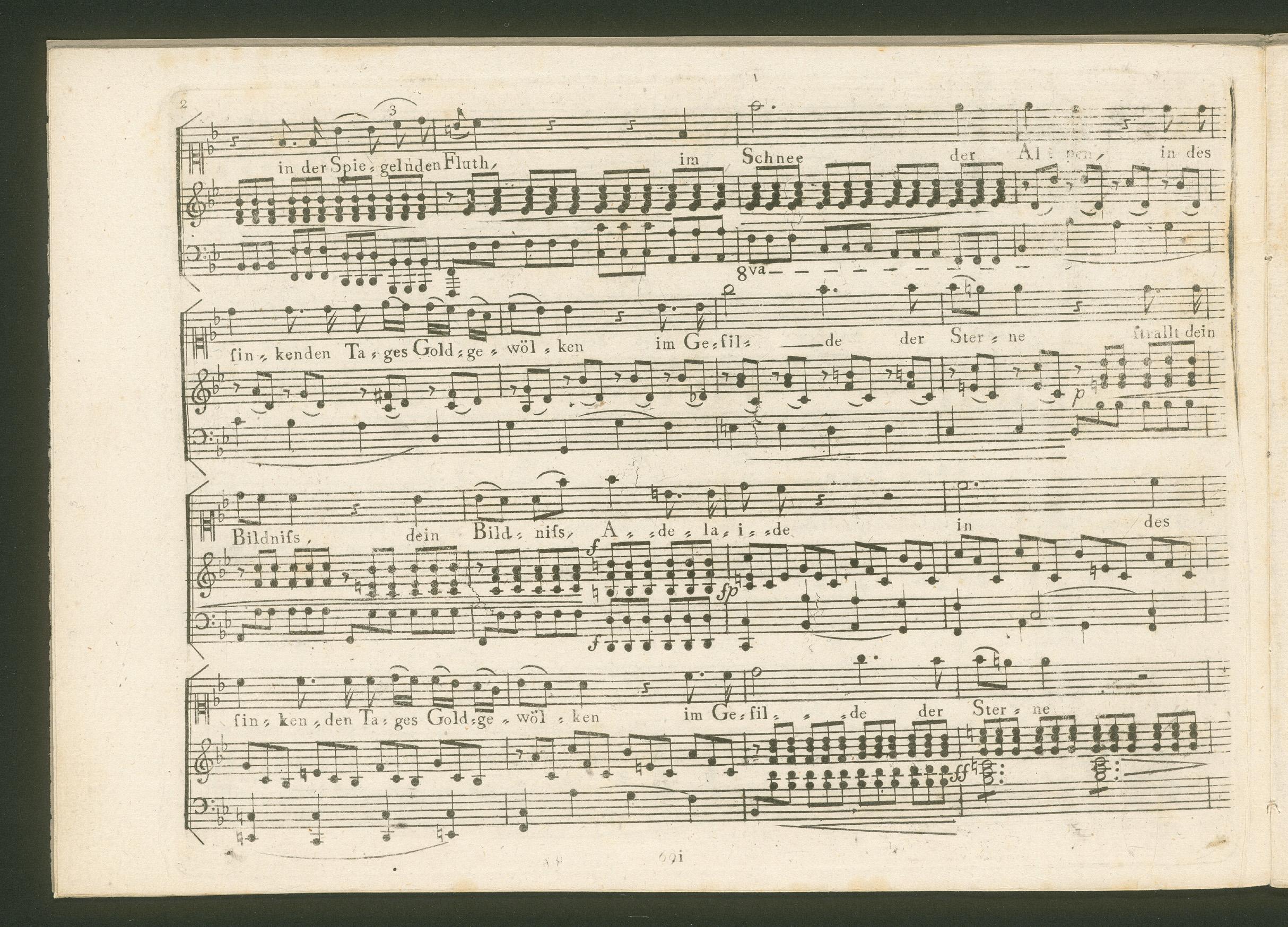 Nonetheless, in a new edition of his poems published in 1811 he commented favourably on Adelaide: “Several composers have breathed life through music into the small lyrical fantasy; but none of them, I am firmly convinced, has so eclipsed the text by the melody as the brilliant Ludwig van Beethoven in Vienna.”

Beethoven himself seems, however, to have been less satisfied – also in musical respects – with the very flawed first print. That at any rate is suggested by the two editions of Adelaide published in 1803/04 by Hoffmeister & Kühnel in Vienna and by Simrock in Bonn. 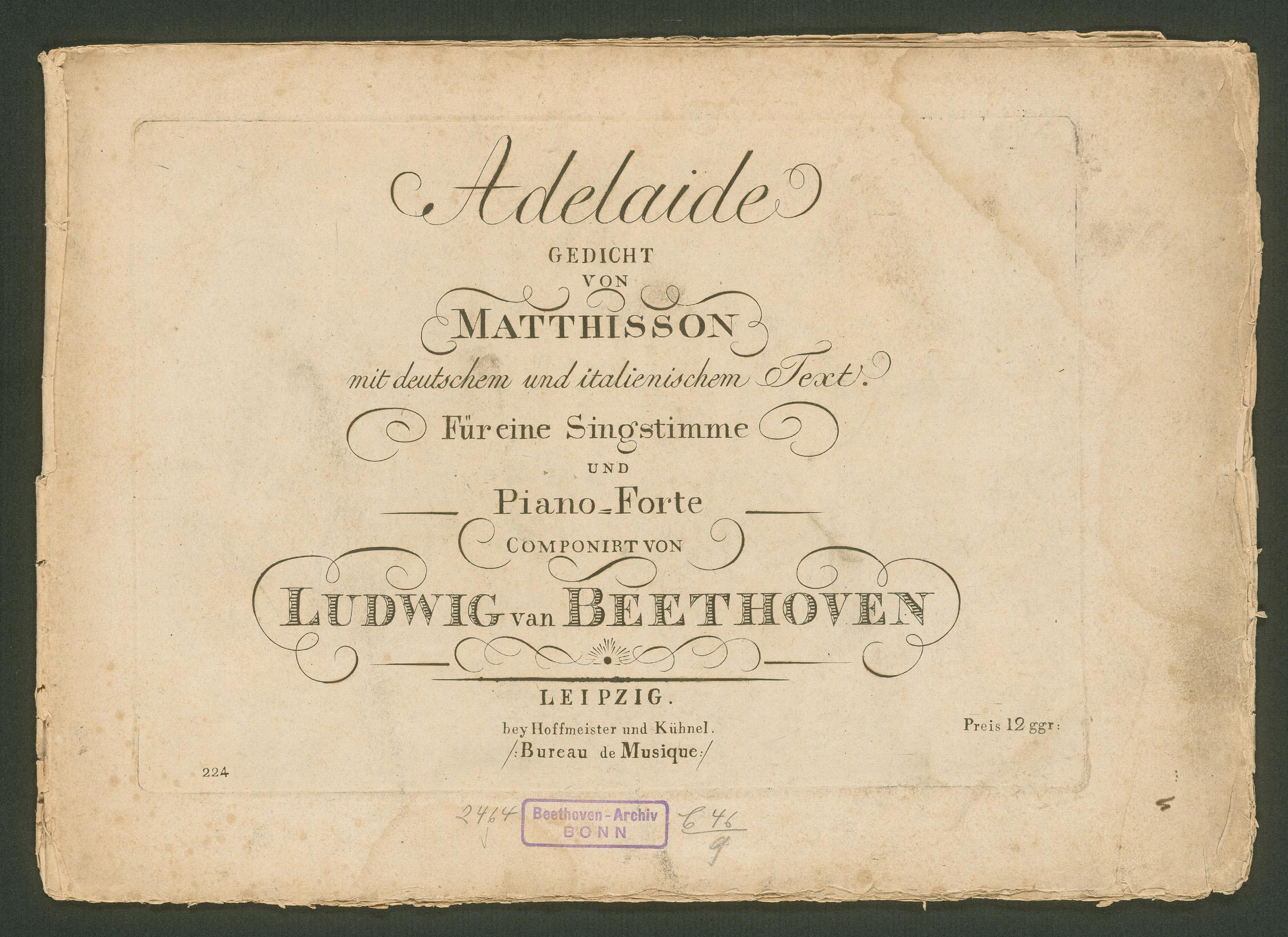 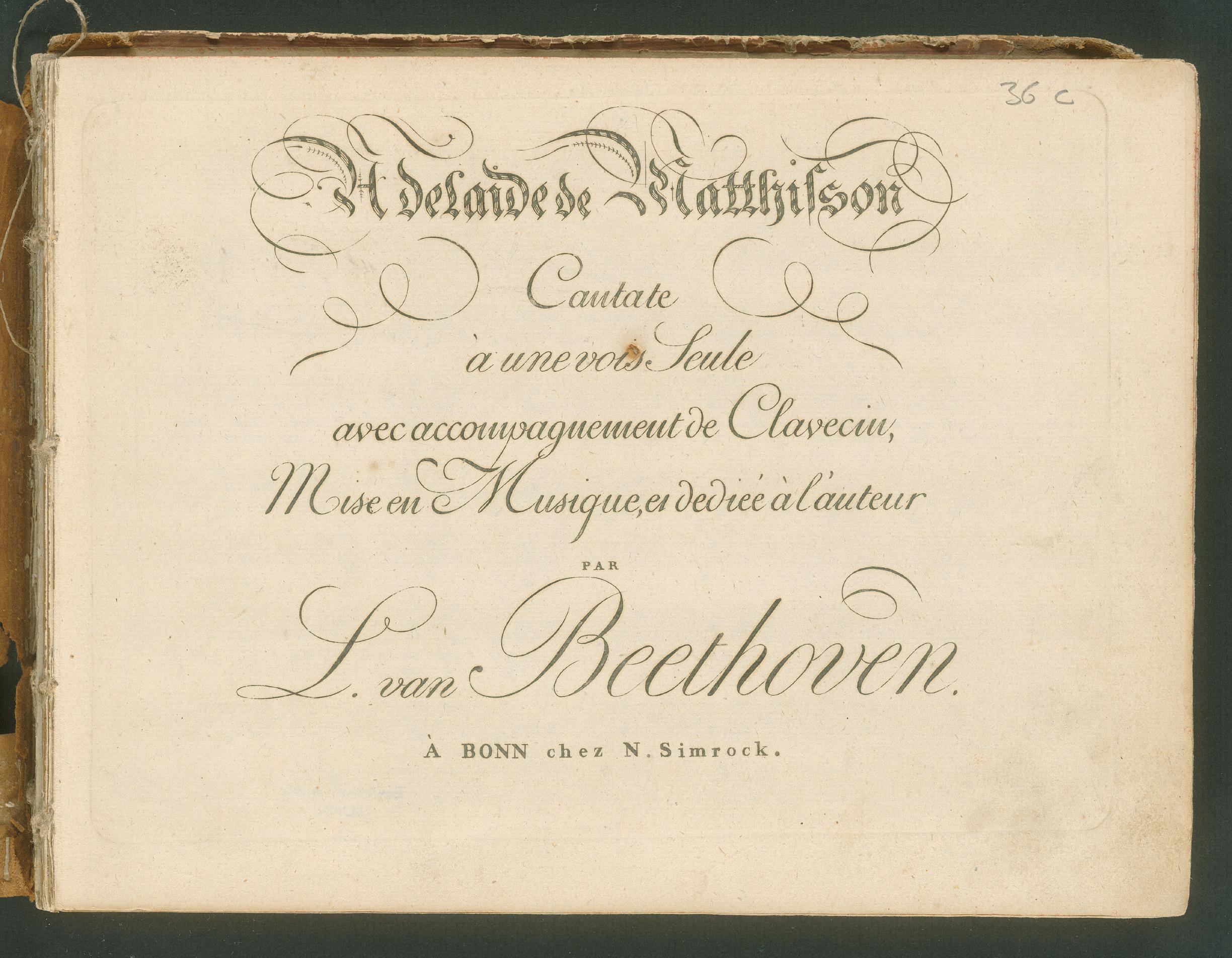 As Helga Lühning explains in the edition of the lied in the Beethoven Complete Edition, both editions show minor musical discrepancies from the original edition that could really have gone back only to the composer. So she believes that very likely these editions came about in consultation with Beethoven and are consequently authorised. Even so, the two editions of 1803/04 also differ from the Artaria original edition in still another aspect: they are bilingual. The Vienna edition also includes an Italian translation, the Bonn, a French one. This was owing to local circumstances: In Vienna, the taste in matters of vocal music dictated by the Hapsburg court was Italian – so here with its translation Hoffmeister & Kühnel could nail down a competitive advantage over the “monolingual” Artaria edition. Moreover, at the international level Italian was the language of music – so it was no wonder that the first London edition of Adelaide (Monzani & Co., 1811) immediately adopted this Italian text.

In the Rhineland, on the other hand, the occupation by Napoleon’s troops at that time brought with it an orientation toward France – which is why Simrock translated not only the title of the edition into French, but also the text of Adelaide. It offered, to be sure, only a limited aid to comprehension, because unlike the Italian translation the French treats the model very freely, makes use of different nature images and changes the perspective as well: From the sentimental, but distanced observation there of “Your friend is wandering lonely in the spring garden” (Italian: “Nel giardino solingo và’l tuo bene”), it here becomes, “Dans ces hameaux c’est l’amour qui me guide” – where the singer no longer sings about Adelaide’s friend, but impersonates him instead.

This may have given an entirely new impetus to performance, but the text hardly does justice to the controlled emphasis of Matthisson’s poem. Indeed, the musically elevated closing apotheosis through the change to Allegro molto, “Once, o marvel! A flower blooms on my grave / A flower out of the ashes of my heart” comes across in French, ushered in by the vow of faithfulness, “Non, jamais! on ne me verra changer”, as very nearly a caricature.

If for our new separate edition of Beethoven’s Adelaide (HN 1043), we do in fact consult the two editions from Hoffmeister & Kühnel and Simrock in addition to the original edition from Artaria, but still underlay only the German text, then this is certainly not a matter of taste, but strictly philological: For one thing, in Beethoven’s time the underlay with additional translations was not the composer’s affair, but the publisher’s – and we have no evidence that here it should be treated differently. For the other, translations call for small changes to the melody in which a melisma is sometimes split up (for example, in the case of  “je lis le nom” instead of “dein Bildnis”), sometimes an upbeat figure becomes a full bar (e.g., with “sù nell’Alpi” for “im Schnee der Alpen”). 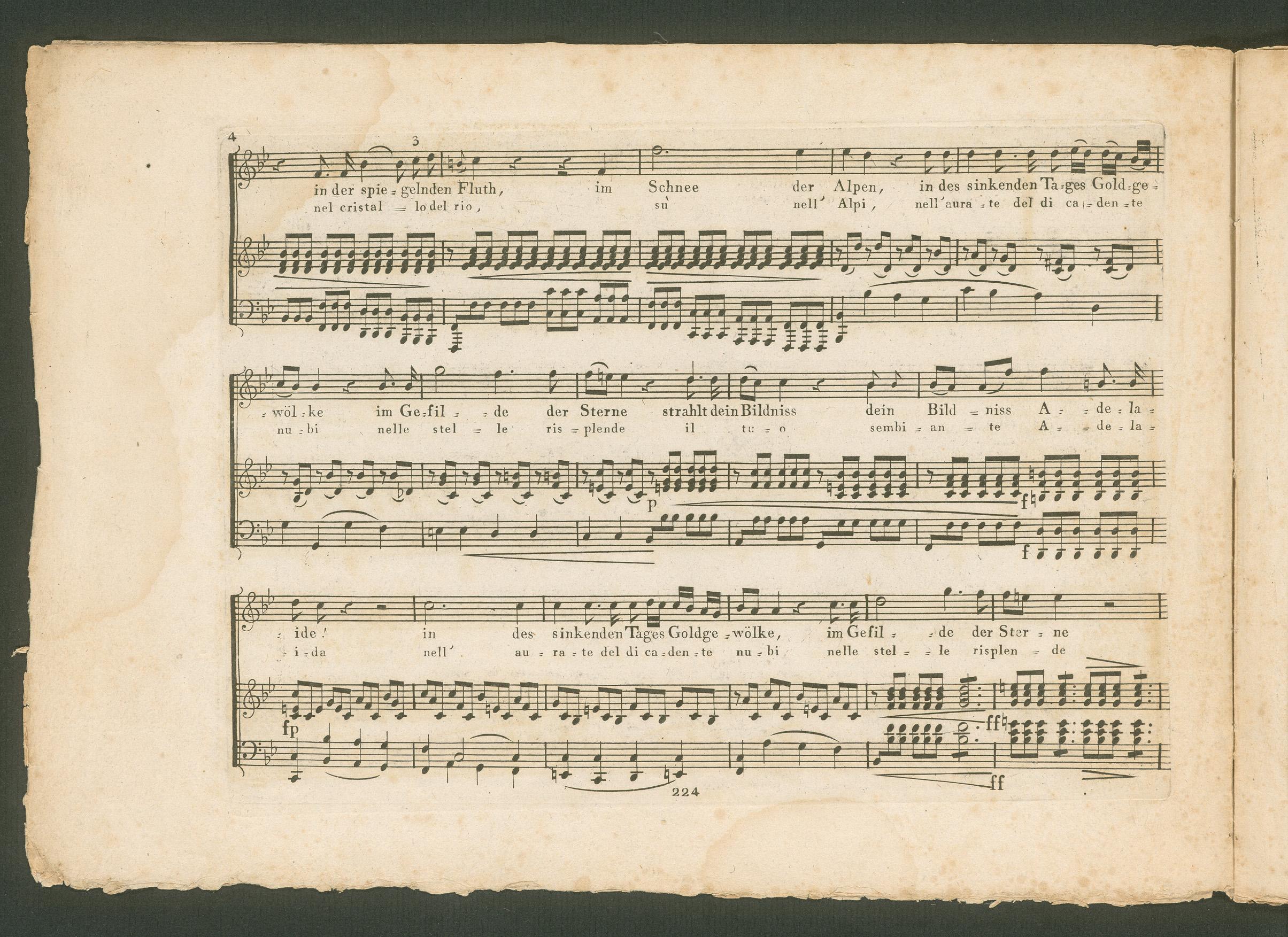 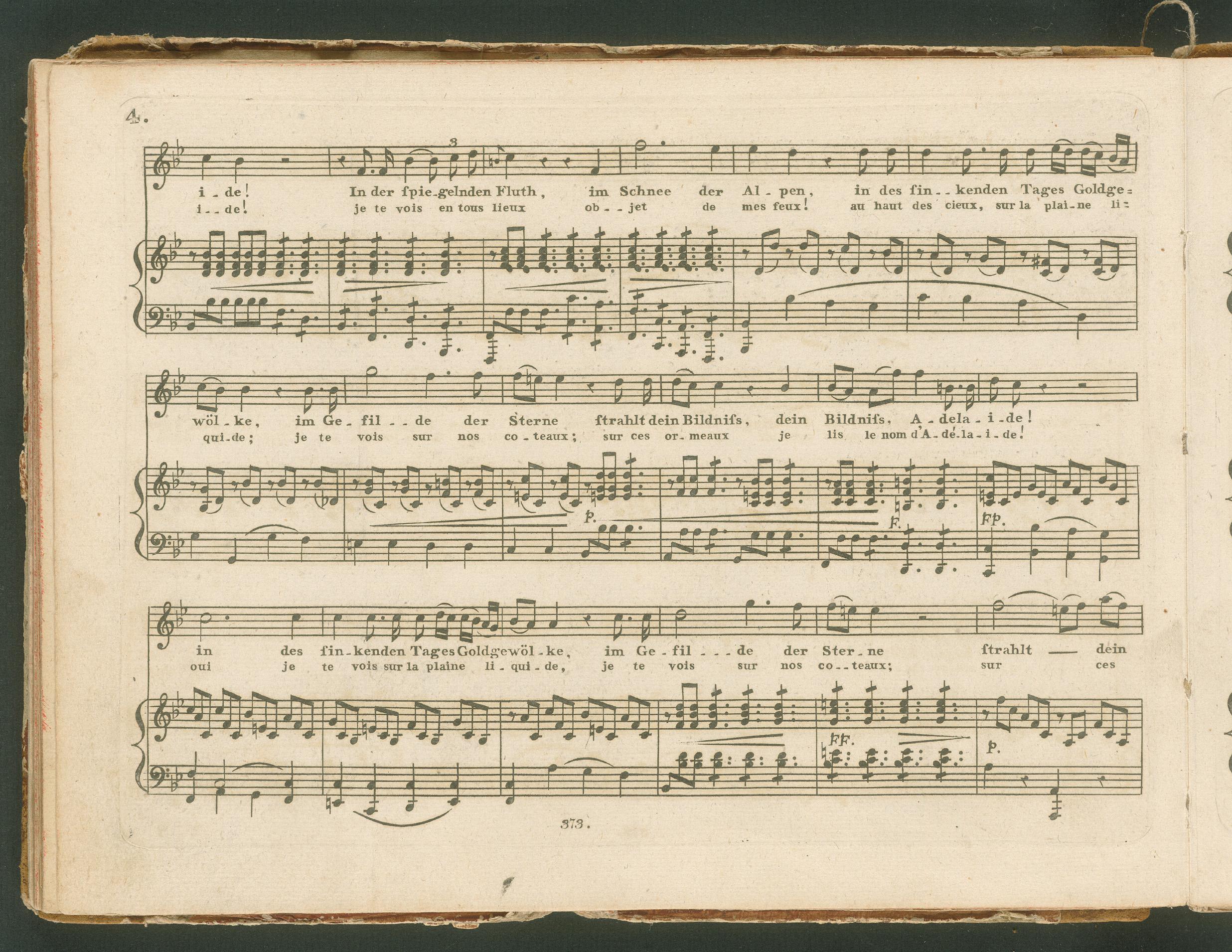 Such interventions affect the musical substance of Beethoven’s composition and so ought not be found at all in the music text of an Urtext edition. In Helga Lühning’s detailed foreword to this edition, however, they are of course documented – not least as early evidence of publishing efforts to expand the circulation of Adelaide, appearing already in Beethoven’s lifetime in over twenty different editions and belonging to date around the globe to his most popular lieder (in the German language).

One Response to »“Adelaide” – a song goes round the world«