Schubert did not live to see the publication of his three impromptus composed in May 1828. They were not printed until 40 years later (!), and it was no less a person than Johannes Brahms who edited these piano pieces beloved by pianists and audiences down to the present day.
There is a problem in the first piece in e-flat minor. And, to my mind, anyone who practices and performs the piece should here come to a personal decision based on the facts. This concerns the ‘C part’ of the rondo-like piece, A – B – A – C – A. Only a few are aware of the fact or take it seriously that in his autograph Schubert unmistakeably crossed out this ‘C part’, thus cancelling it: 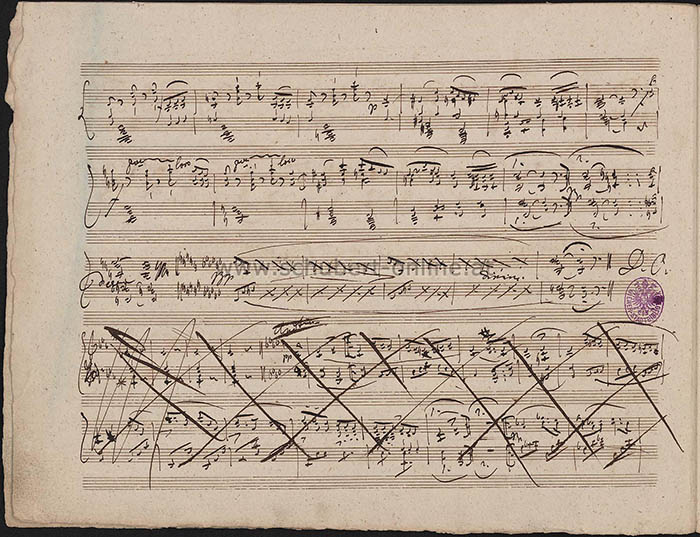 We can indeed speculate as to the reasons for this autograph deletion: Was it on formal grounds? Hardly likely, because just such a rondo form is known through many other Schubert pieces. Did Schubert perhaps feel the piece was too long, which is why he crossed out around at least 165 measures (not counting the repeats)? That could have been a reason since both of the other piano pieces of D 946 are only about half as long. Or, did he possibly consider that on musical grounds it was compositionally too slight? Here I personally would quietly nod in the affirmative: The C part in A-flat major seems too innocuous to me, and it does not in any way counterbalance the stirring e-flat minor (which the B part did indeed do lyrically).

But the problem is that Johannes Brahms, editor of the first edition, reversed Schubert’s cancellation and had all the notes reprinted. He, who of all people was so scrupulous, who knew the struggle of a composer for the optimal solution, he ignored Schubert’s express wishes! Why oh why? Again, we can only speculate concerning this… at any rate, Brahms identified the original deletion by adding a footnote: 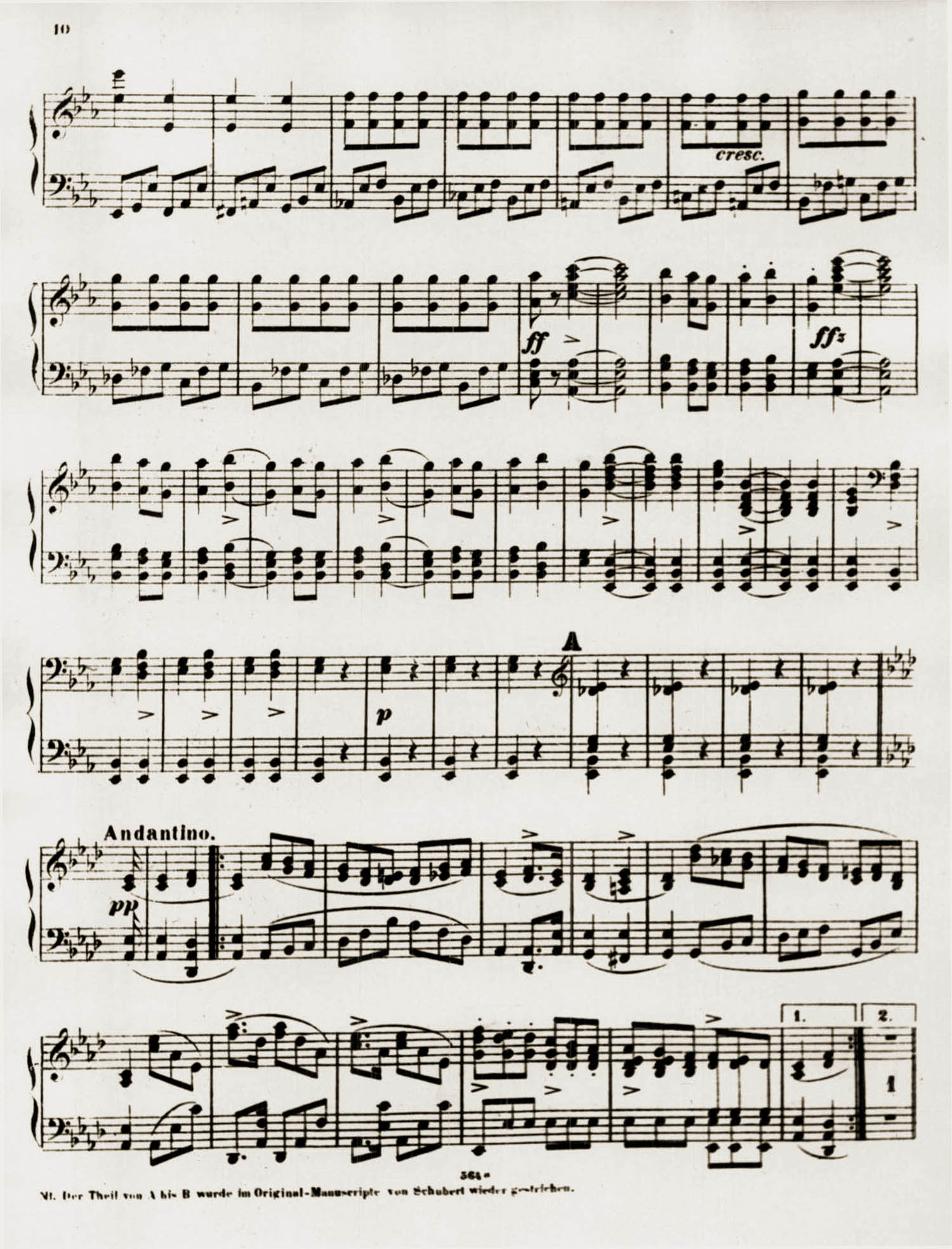 This, to date, has not kept all subsequent printed editions from repeatedly reprinting Schubert’s e-flat-minor Impromptu in the wrong, long version. ‘Wrong’? But, of course, ‘wrong’!, because Schubert so demonstrably did not want it. And yet we have to offset this ‘wrong’ with another phenomenon, that is, with an absolutely serious tradition: For nearly 150 years the piece has been played in the long Brahms version. Many would miss something they’ve grown fond of, yes, they would even consider performances to be ‘wrong’ if performers were to leave out the ‘C part’. We can compare this phenomenon perhaps with a chapter in a book or a scene in a theatre piece: a chapter well known to its readers, a scene to theatre goers – now what if this part should suddenly be left out, ‘merely’ because the author purportedly wanted it so?

But today, more pianists than ever are foregoing the ‘C part’, amongst them:

In our just published new issue of the Schubert pieces (HN 66) we want to draw attention more clearly than before to the topic discussed in this blog: So, to be found there from now on are still the measures crossed out by Schubert, but only in small print with appropriate references. 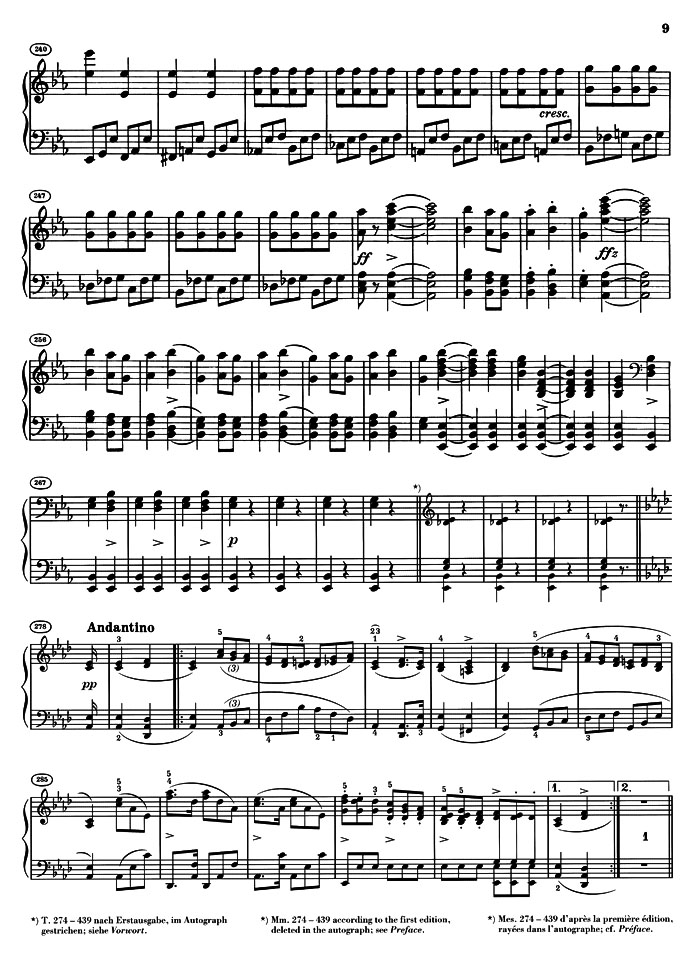 We couldn’t decide to leave out altogether the measures Schubert didn’t want (though that certainly would have been formally ‘correct’ as representing the 1828 authorial wish). To us, the enormous tradition of the ‘long’ version seemed to weigh too heavily for that. Thanks, however, to small print and commentary, you, dear piano player, have the possibility, nay, the duty, to make up your own mind. We would be curious to know where on this you stand, so please do let us know.

13 Responses to »Schubert deletes, Brahms restores. On the first of the three posthumous piano pieces (Impromptus) D 946 by Franz Schubert«