The use of folk-music elements in art music has, as is well known, a long tradition reaching back to the late Middle Ages. In the 2nd half of the 19th century this practice obtained new qualitative significance against the background of rising nationalism. If it served so many composers as a demonstration of their rootedness in their homelands, and at the same time as a self-confident counterweight to the dominance of German-Austrian music at that time – we think, for instance, of Edvard Grieg or Antonín Dvořák –, then other musicians paraded with great success the exotic charm of foreign sounds.

Benefitting like hardly anyone else from the fashion for such national idioms was the violin virtuoso Pablo de Sarasate (1844–1908), who in his own compositions borrowed from the folk music of numerous European countries and regions. As, for example, after the success of Georges Bizet’s Carmen (1875), the Spanish atmosphere was en vogue, Sarasate wrote four series of Spanische Tänze (1878–82) as well as a Fantasia sobre Carmen de Bizet (1881), a potpourri on the opera’s most popular melodies.

Sarasate probably got the inspiration for his Zigeunerweisen during his Budapest visit in the spring of 1877; the gypsy airs were published in the original scoring for violin and piano at the beginning of 1878 by the Leipzig publishing house B. Senff (the orchestra
version followed in 1881). In Budapest Sarasate visited Franz Liszt, gave several
concerts and heard – by his own admission – popular songs and dances played by
the so-called gypsy bands, then circulating widely. Like all his contemporaries, Sarasate also identified Hungarian folk music with ‘gypsy music’, thus the music of the Roma
living in Hungary. For his composition presumably originating in the summer/fall
of 1877, he not only chose as quasi ‘souvenir’ of this Hungarian stay, the characteristic form of the csárdás with its slow beginning (‘lassú’) and faster, climactic continuation (‘friss’), but also borrowed all the themes from popular Hungarian music pieces.

Whereas Sarasate, with this adopting of the dances and songs already arranged by folksong collectors and composers, further arranged them by means of ornamentation, runs, cadenzas and insertions, the case is different with the melody borrowed for the third part of his composition (Un peu plus lent, mm. 45 ff.). Here the Spanish virtuoso came under suspicion of plagiarism a few years after the publication of the Zigeunerweisen. This is at least what we are led to surmise from the extant letter of apology that Sarasate’s piano accompanist and secretary, the German pianist Otto Goldschmidt, wrote at his behest to the Hungarian composer Elémer Szentirmay (artist’s name for János Németh, 1836–1908). 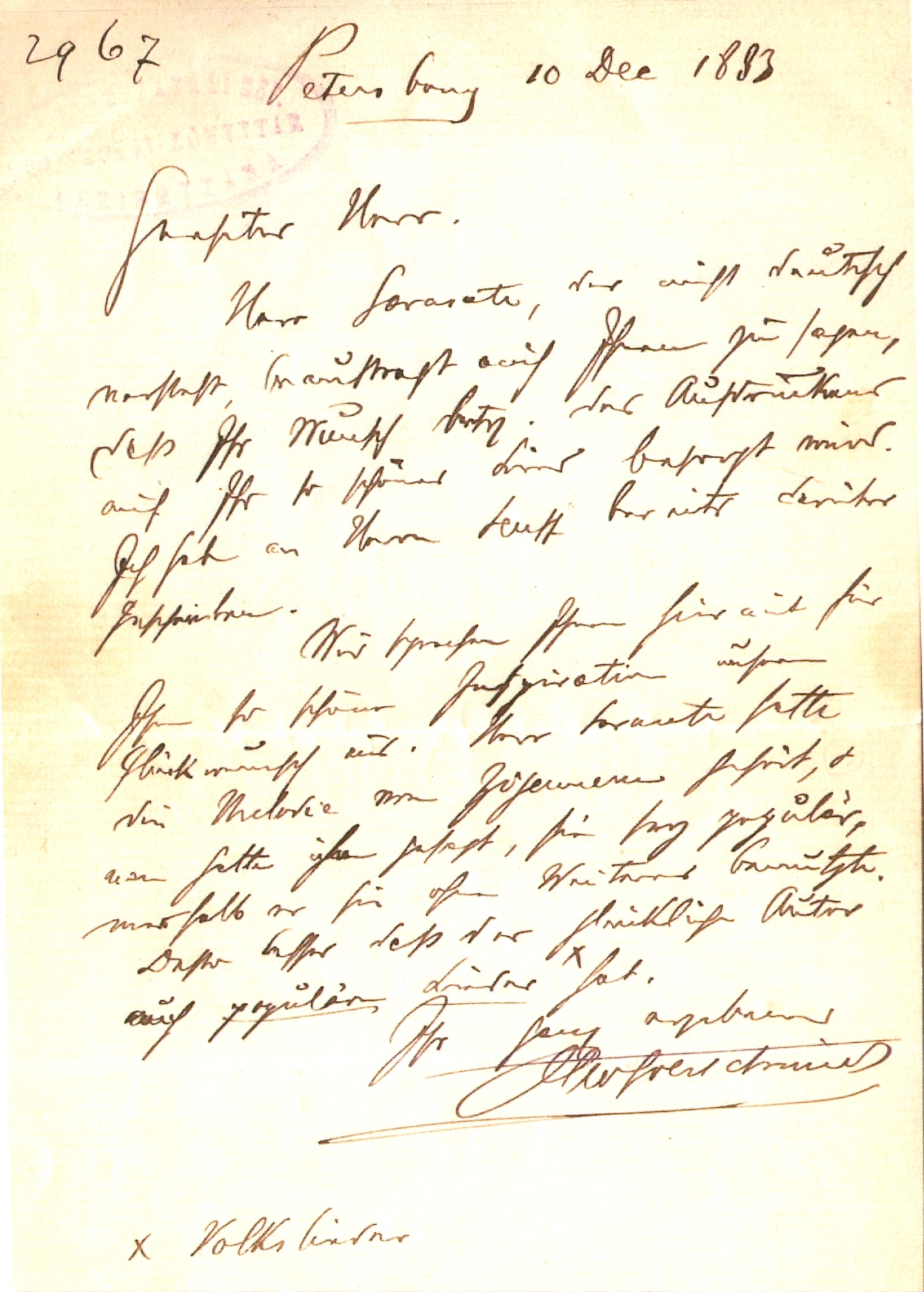 Petersburg, 10 Dec. 1883
Dear Sir,
Mr Sarasate, who does not understand German, asked me to tell you that your wish concerning the printing of your so lovely song shall be dealt with. I have already written about it to Mr Senff.
We herewith express our congratulations on your so lovely inspiration. Mr Sarasate had heard the melody from gypsies, & had been told that it is popular, which is why he used it
without further ado.
So much the better that the fortunate author also has popular songs.*
Very sincerely yours,
Otto Goldschmidt

Thus, Szentirmay did not want any compensation, but was merely adamant that he be mentioned as originator of that so-memorable melody. It derives from Szentirmay’s song, Csak egy szép lány van a világon (‘There’s Only One Lovely Maid in the World’), composed in 1873, and was adopted, as comparison shows, virtually unchanged by Sarasate:

Sarasate’s apology that he had been told that the melodies were ‘popular’ and so had used them  ‘without further ado’, that is, without making enquiries about the author, seems at first glance plausible. At second glance, however, doubts appear. Szentirmay’s song had, in fact, quickly become well known, but in 1877, only four years after the composition, it was, however, probably still firmly connected in its popularity with his name. There is also the likelihood that during his encounter with Liszt Sarasate expressed his interest in ‘gypsy music’. In this respect, it stands to reason that the old master introduced him to his pupil Ilonka von Ravasz, who himself had imparted to him Hungarian art and folk songs. Indeed, it is conceivable that Sarasate did not become acquainted with the song through ‘a gypsy’, but through Ilonka – she was, though, Szentirmay’s niece.

Sarasate kept his word, and the reprints from 1884 had the comment added at the beginning of the section in question in his Zigeunerweisen, ‘Melody by Scentirmay Elemir [sic] dala [= Hungarian: song by], used with the composer’s kind permission’. 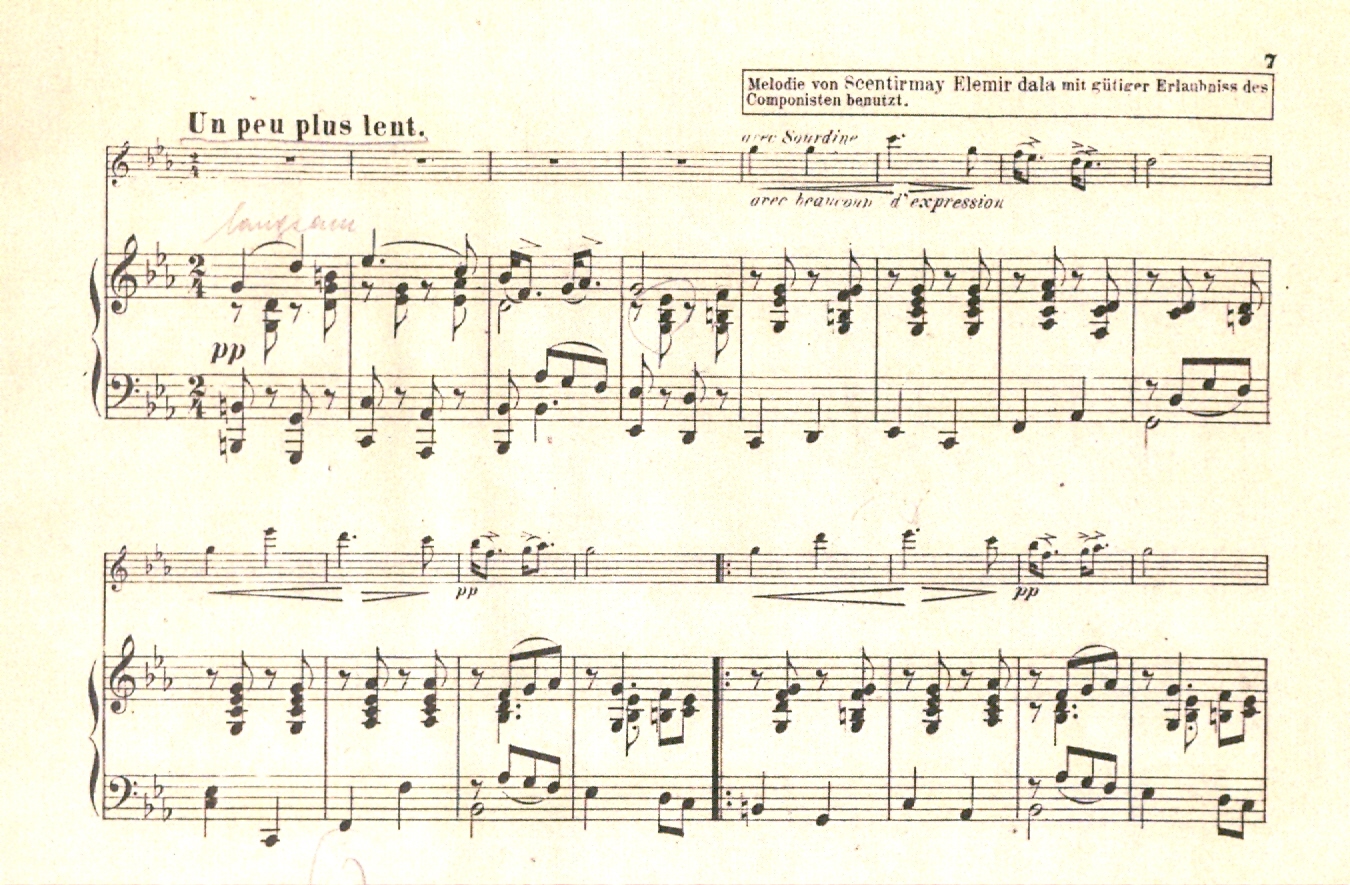 The fact is that Sarasate did not worry about the creator of the melody or – still more perilously, in case he knew that it was not a folk song – failed to get his ‘kind permission’. At any rate, despite the clarifying footnote, he seems to have had a bad conscience. In the only recording of his Zigeunerweisen available today, from 1904, he impulsively dropped this third part of his composition, with a brief cue to the pianist, and jumped directly to the closing Allegro molto vivace:

In the Zigeunerweisen not a single theme, in fact, derives from Sarasate, but for sure nobody probably denied him the original achievement of the arrangement of this ‘filched’ melody for violin and piano or orchestra. Our edition (HN 573) contains Sarasate’s original bowings and fingerings in the score as well as an unmarked solo part and a further one marked by Ingolf Turban; it is now in the process of being edited by Ernst-Günter Heinemann and will document for the first time in detail the borrowing of the melody as well as also the ‘Szentirmay’ case.

Without doubt, a title such as ‘Fantasy on a Popular Hungarian Melody’ would have been more accurate and appropriate, but who is blaming Sarasate for choosing with a nod to the public the much handier title Zigeunerweisen?