Posted on September 2, 2013 by Norbert Gertsch

Sometimes a conundrum can’t be solved, even when the source situation makes abundant material available to the editor of an Urtext edition. This, for instance, is the case with Robert Schumann’s Papillons, Op. 2, for which the ‘definitive version’ can hardly likely be determined.

Let’s first take a look at No. 2 of the Papillons in the autograph and in the first edition: 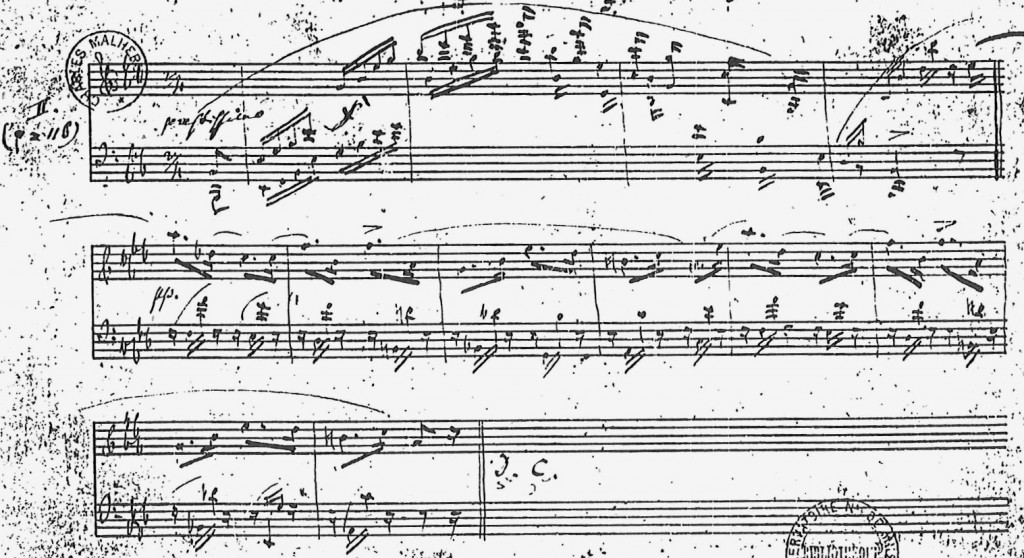 Comparison of these two sources definitely reveals differences. In the first edition, for example, there is a mf in the 5th measure and a pp in the 9th measure. On the other hand, the autograph has only a pp in the 5th measure. Changes of this kind that are unlikely to be interpreted as the music-engraver’s mistakes, furnish evidence that Schumann himself intervened by correcting and changing the music text during preparation for publication – and hence the first edition has his ‘blessings’, is thus authorised.

Then, after Schumann’s death in 1856, the new edition mentioned of the Papillons appeared about four years later from Kistner publishers. Here is its No. 2:

It is at once evident that the music text was completely re-engraved and, of course, not for no reason: It has undergone several changes. The most obvious is certainly the addition of an ossia stave above the 10th and 11th measures. But at closer view it manifests other differences in details. The rhythm of the melody in the 5th/6th and 10th/11th measures has been subtly altered, the upbeat to the 1st measure is now a 16th note, not an 8th note. And the ‘D.C.’ (da capo) at the end of the piece has disappeared. Who changed the music text (that this is no accident or slip-up goes without saying)?

Now there are similar cases where publishers change the music text of their editions in order to attract potential customers afresh. This is especially true at the time when pirated prints were still the order of the day. The original publisher could, for example, publish an edition ‘improved’ by the composer or by another authority, thereby invalidating the text of the pirated print. These editions then carried an appropriate notice on the title page, thus ‘Edition nouvelle revue par l’Auteur’ (for example, in the case of the Symphonische Etüden, Op. 13) or an editor’s name ‘Edited by Clara Schumann from the Manuscripts and Personal Information’ (on her ‘Instructive Edition’ of Robert’s works).

Unfortunately, no such indication is to be found in the new edition of the Papillons. That nonetheless the changes claim a certain authority is documented by the printed footnote for the ossia stave. Stated there is: ‘Also played altered this way by the composer’. Whoever heard this variant from Schumann, we shall probably never learn. Much indicates, though, that it was actually Clara who was responsible for at least some of the interventions by Kistner. In her ‘Instructive Edition’ of 1886 and even in the Complete Edition of Schumann’s Works that she edited in the 1880s, she adopted the subtly different rhythm of measures 5/6 and 10/11, though neither the ossia nor the deletion of the da capo. Thus, over 20 years later she still took as authentic at least some the interventions in the new edition of 1860.

Ultimately, as already said, we shall not be able to clear up the status of the music text in the posthumous edition from Kistner. The changes run through the entire work and are manifested later in numerous editions of the Papillons, often, to be sure, without their editors’ having been aware of the problematic tradition.

From the perspective of an Urtext edition, we have to proceed with restrictions: The edition appeared posthumously. We have no evidence that Schumann himself had, for instance, left a revision copy behind with Kistner, from which the music text was changed in Leipzig. We know nothing about anyone to whom the desired text changes could have been disclosed. And in the obvious case, that here Clara Schumann was perhaps the authority in the background, evidence is lacking that she was instructed by Schumann, and that her putative changes did not, however, ‘merely’ meet her own ideas of a ‘better’ music text.

There are, though, also modern editions that after critical scrutiny see the definitive text, authorised by Schumann, in the new edition of 1860, thus, for instance, the edition edited by Howard Ferguson in 1985 for the Associated Board of the Royal Schools of Music.

That all of this is not an irrelevant trifle, but that our hearing of the Papillons is, even today, marked by these two strands of tradition, should be conclusively documented by several recordings: