Posted on September 30, 2013 by Wolf-Dieter Seiffert

The autograph of Mozart’s piano quintet for piano and four winds K. 452 harboured a secret for more than 200 long years. I could first reveal it as part of my Urtext edition (HN 665 and HN 9665) in the year 2000. The Preface and Critical Report give all ne­ces­sa­ry information. A minor philological mystery thriller! Meanwhile, my discovery seems by and large to have gotten about, for on the Internet as well as also in a recently pub­lished Edition, the facts and my elucidations of the reasons are correctly conveyed.

The secret is that the close of the work supposedly exists in two different Mozart ver­sions; since year one, that is, we have thought that in both cases these were in Mo­zart’s handwriting. Even the Neue Mozart-Ausgabe (1957) did not recognise that only the lon­ger, though not the shorter, version was written by Mozart. The latter only re­semb­les Mozart’s handwriting at first glance.

But why should anyone want to forge Mozart’s handwriting on the last page of the K. 452 autograph. especially in consideration of the fact, that the original is existing? My answer to that: the single leaf on which Mozart’s genuine hand is located must have gone missing for some time from the autograph of the work; presumably, the last leaf had fal­len off and been temporarily lost. There had to be a closing in order to be able to play and print the work that its composer after all took to be ‘the best that I have yet written in my life’. An un­known person jumped in and composed/notated four concluding bars on a blank piece of Mozart’s paper. Mozart’s original leaf with, that is, a completely dif­fe­rent 11-bar close was later found in the estate and restored then to its rightful place. All that and more too can be looked up in my edition.

I would like in this blog to find out who the writer was and whether he was a forger. Mean­time, we can indeed be exceedingly grateful for the generosity of the owner of Mo­zart’s autograph and study it comfortably online: Mozart’s Autograph (Bibliothèque na­ti­o­na­le in Paris). Here, the final inscribed page with the close of the third movement in the unidentified hand: 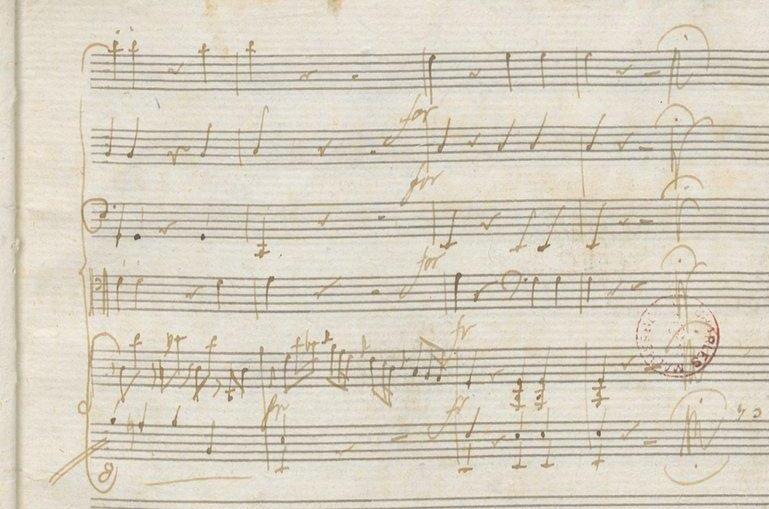 And now for comparison, Mozart’s own eleven autograph closing bars as they are to be found on the directly preceding autograph leaf: 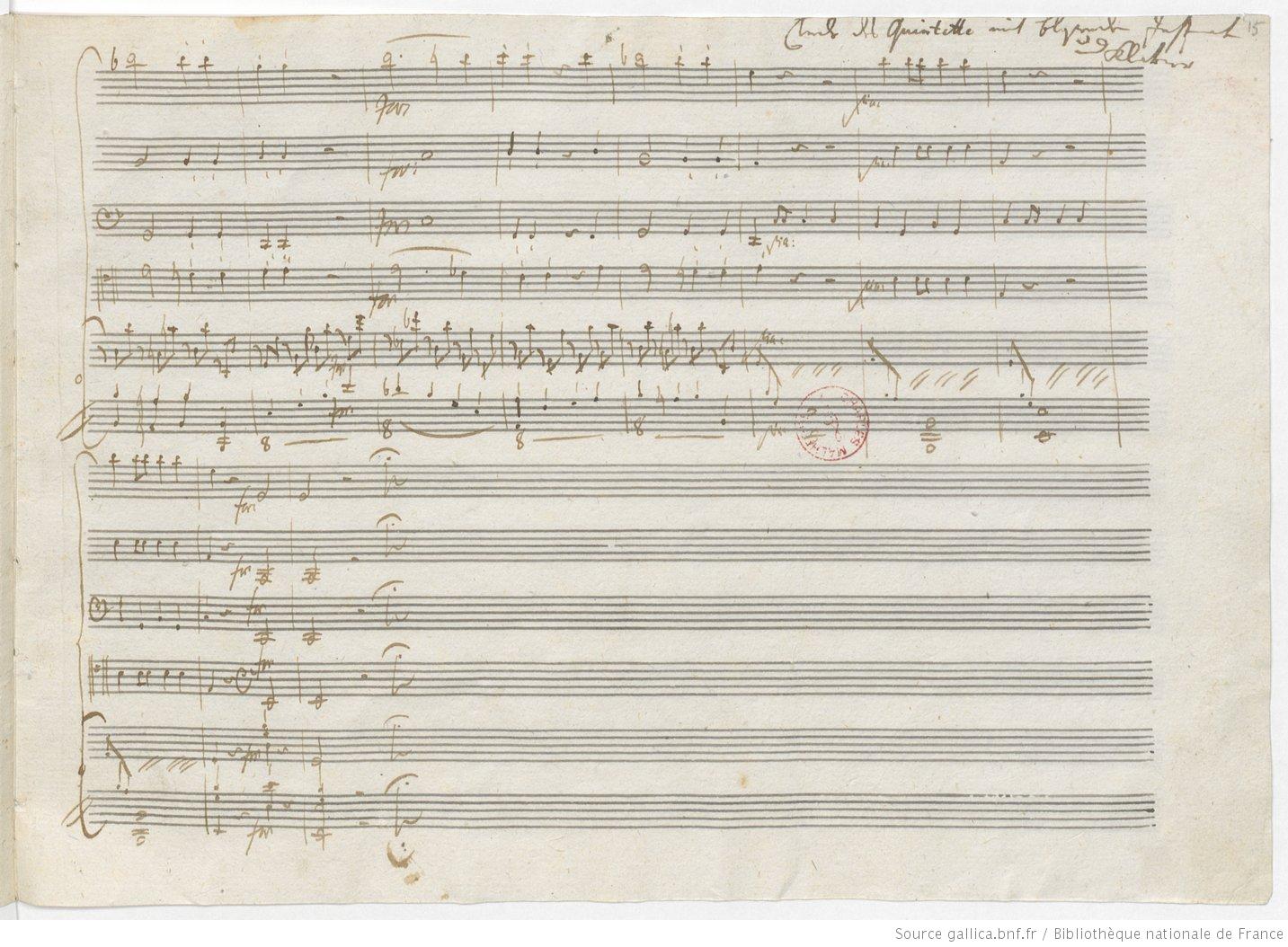 Let’s consider more closely the characteristics of the unidentified hand. It is not the hand of a calligraphically-skilled, professional music copyist, but rather the distinctive hand of a writer experienced to some extent in writing music, presumably a musician:

Mozart’s handwriting, on the other hand, exhibits its own entirely characteristic i­di­o­syn­cra­si­es. And we cannot do otherwise than recognise in direct comparison that our un­known writer has handwriting similar to Mozart’s in many particulars, but that it is not necessarily a matter of imitation or even forgery. At best, he is trying ‘not to stand out’. He had visual material enough, for the rest of the autograph was indeed in front of him. What does stand out is:

The hand of the un­known writer thus has features of the Mozart hand. This is not suf­fi­ci­ent reason to expose him as a ‘forger’.  By virtue of the extremely unusual fact that this hand is found in the midst of a Mozart autograph, even the editor of the New Mozart E­di­ti­on didn’t notice it. But if we envision the occasion and the circumstances of this a­no­ma­ly, it becomes clear that not fraud, but pure pragmatism (that is, preparation of play­able performance material) led to the production of this curious, non-autograph page within a Mozart autograph. The great awe that we rightly show original Mozart manuscripts today was not at all yet known then.

The unidentified hand thus resembles that of Mozart, the paper used derives from the Mo­zart estate. I infer from this that the writer must first of all have come from within Mo­zart’s most immediate surroundings, and second, that only Constanze Mozart, the wi­dow, could make this autograph available, indeed, she must have commissioned the – ne­ces­sa­ry (!) – completion. Constanze Mozart, however, perpetrated (intentionally?) a­gainst her contemporaries (and us) a deliberate obfuscation, first claiming that her hus­band had given the autograph of K. 452 away and never again gotten it back. Well, in any case, we can just check out the first anecdote by the notoriously unreliable Friedrich Schlichtegroll, in his ‘Anecdotes from Mozart’s Life, Communicated by his Surviving Spouse’. Not a word of it is true, I say, even though what was ostensibly supposed to have befallen Mozart reads touchingly. Then later, Constanze Mozart relates an entirely dif­fe­rent story – in the course of the publishing correspondence about the Mozart estate (to be more precise, in her letter to André of 31.5.1800) — and here she also mentions the two endings.

But now the final, most suspenseful question: Who could the ominous unidentified wri­ter have been? Alas, with four bars in K. 452 there is (too) little comparison material to expose him, above all, too little of his that is uniquely identifying (as, for example, a tem­po marking, or suchlike).

For the Mozart connoisseur, four persons quickly come to mind who could also have im­mor­ta­lised themselves in the autograph of K. 452:

(1) We mention in first place Franz Xaver Süßmayr, whose handwriting often actually does resemble that of Mozart’s to the point of mistaken identity; his hand can very well be studied in the second of the Requiem autographs (e.g., from page 21, “Dies irae”). The bass clef is amazingly similar; the tendency to stem notes toward the right can also oc­ca­si­o­nal­ly be observed here. To my mind, however, he is to be excluded as writer for K. 452, although uncertainty ultimately remains. His notes are small and compact overall, uniformly written and workmanlike, utterly different from those in the wind quintet.

(2) Joseph Edler von Eybler orchestrated, particularly in the first autograph of the Requiem, the “Dies irae” sections. His hand strongly differs at first glance from K. 452; thus, he cannot in any case have been the one.

(3) Then, Abbé Maximilian Stadler. As a rule, his handwriting rather resembles that of a meticulous copyist; it is orderly and precise. For the sake of simplicity, here is an example from another work (K. 372): 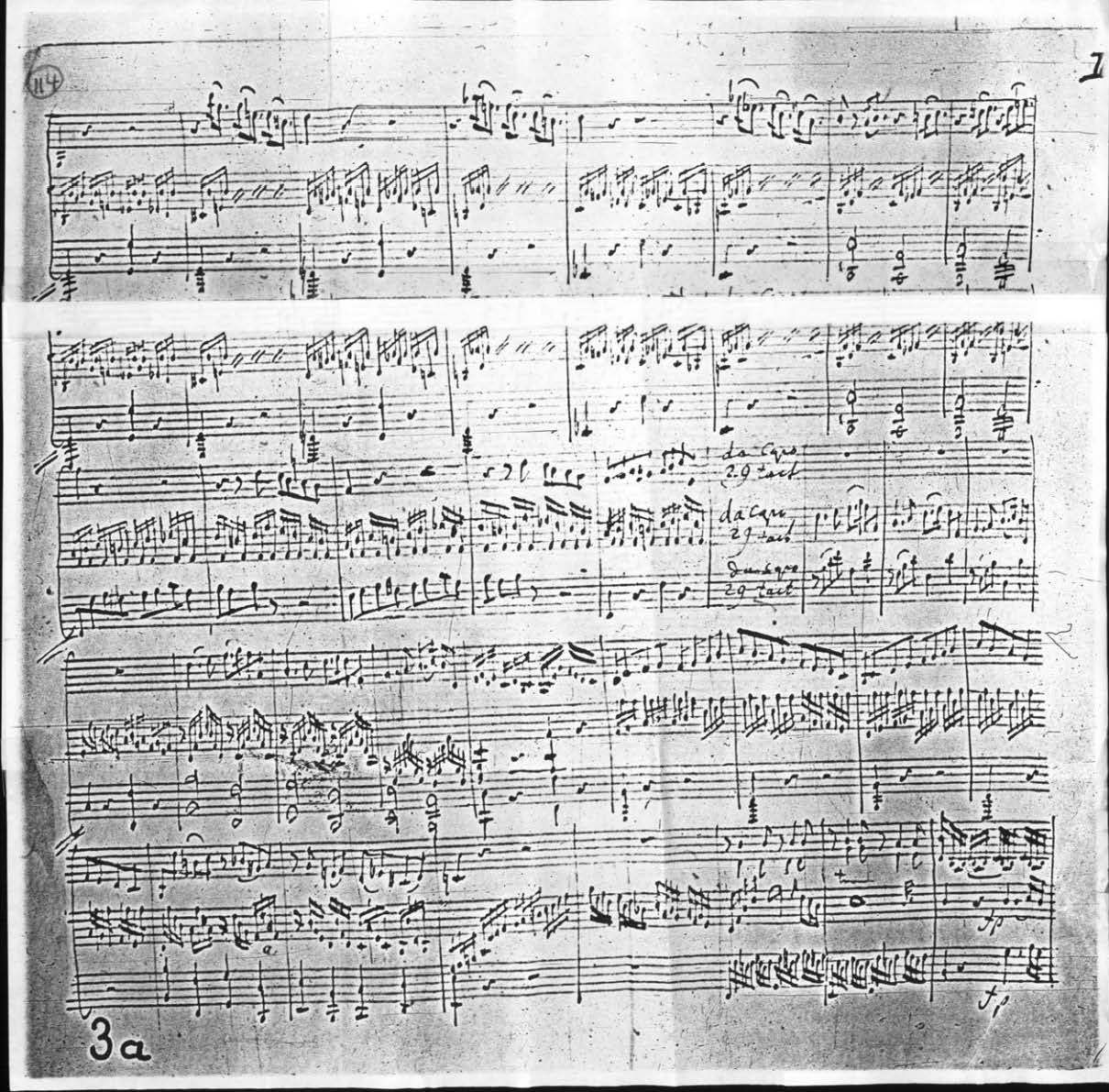 Allegro of a Sonate B-dur for Piano and Violin Fragment, K. 372, p. 3a (Source: National Library of Austria, Music Collection, Shelfmark: 6462/2863). The last two staves are written by Stadler, the other ones by Mozart.

So, to my mind, he does not come into question as the one wanted.

(4) Even Franz Jacob Freystädtler is alas to be excluded, I think, despite substantial resemblance: His handwriting in the Requiem does indeed very slightly resemble that in K. 452, for it appears somewhat inept and inclines up to the right, also the rest signs are non-uniform in character; however, Freystädtler’s notation here is altogether more com­pact and mature than would be expected. From him, as Leopold Nowak once dis­co­ve­red, derive the strings and woodwinds in the first autograph (from page 11ff.) of the Kyrie-
Fuge. We would need more knowledge of further Freystädtler autographs in order to be able to reach an ultimate opinion.

Dear Mozart connoisseur: Who could have been the portentous writer of the last page of K. 452? That we must still figure out! Do you have suggestions about the ideal method of getting graphological evidence in terms of specimen handwriting? I shall be glad to pub­lish any relevant letter within the framework of the Henle blog.

So that this blog does not come to an end entirely without music, you can still listen here to the entire Mozart Wind Quintet K. 452, though in the very rarely offered, non-au­then­tic version for piano with violin, viola and violoncello. The recording (on ‘early’ ins­tru­ments with Richard Burnett, fortepiano, and the Finchcocks Quartet) is im­pres­si­ve­ly successful. They play from the first edition of 1794 that also includes the wrong ending by our fateful writer:

One Response to »A forgery? And if so, by whom? On the closing bars in Mozart’s Wind Quintet K. 452«