As noted in the Preface to the Henle edition of Henryk Wieniawski’s Scherzo-Tarantella (HN 553), a violin and orchestra version of this work exists in an incompletely preserved photocopy of a lost autograph. This version was not published, and it presents a few no­table material differences in comparison with the published violin and piano version. Un­for­tu­na­te­ly, no other autograph of the Scherzo-Tarantella has survived, and without do­cu­men­ta­tion regarding Wieniawski’s editing process, we could not consider the violin and orchestra version as a source for the violin and piano version.

Nevertheless, the violin and orchestra version is a valuable and interesting source. In par­ti­cu­lar, it can help us consider the compositional process of the Scherzo-Tarantella.

The main focus in this article concerns two musical features unique to the violin and or­ches­tra version of Wieniawski’s Scherzo-Tarantella. One is an extended introduction of twenty measures before the first solo entrance, and the other is the material ac­com­pa­ny­ing the D major passages of the “Cantabile” section. An examination of these sections in terms of their musical structure, technical considerations for the pianist, and ensemble reveals elements that may show Wieniawski’s compositional process and ideas. (Measure numbers differ between the two versions. For ease of comparison and discussion, all measure numbers in this article refer to the mea­sure numbers as published in HN 553)

In the autograph score of the violin and orchestra version, instead of “Cantabile” (at mea­sure 271), the solo part is marked “Cantante,” while, simultaneously, “Scherzando” is writ­ten above the staff of the first violins. Here, during the D major segments, the first and second violin parts present passagework based on material from the first tarantella section, with a particular focus on undulating triplets and the motive associated with the octave leaps. Notably, material from the passagework in the solo violin main tarantella theme is excluded. (See Ex. 1: Measures 271 to 278. To show as many of the layers and voi­ces in as compact a form as possible, the examples below have been reduced to a vio­lin and piano arrangement with minimal consideration for technical practicalities. The bowings are taken from the manuscript.)

The repetition of the leaping motive leads smoothly into the likewise tarantella-inspired solo violin passage featuring octave leaps at measure 301 (marked grazioso in the violin and piano version while unmarked in the violin and orchestra version). (See Ex. 2: Mea­sures 294 to 302.)

And after returning, in measure 317, to a “scherzando” similar to the one in the previous instance, the passage becomes more elaborate with arpeggiated chords in the strings. This leads into the chord-embellished octave leaps in the solo violin at measure 347. (See Ex. 3: Measures 341 to 350.) We can also note that in measures 343 to 346 the solo violin has a sustained open A string instead of octave doubling as found in the violin and piano version.

Ex. 4: Opening of the violin and orchestra version 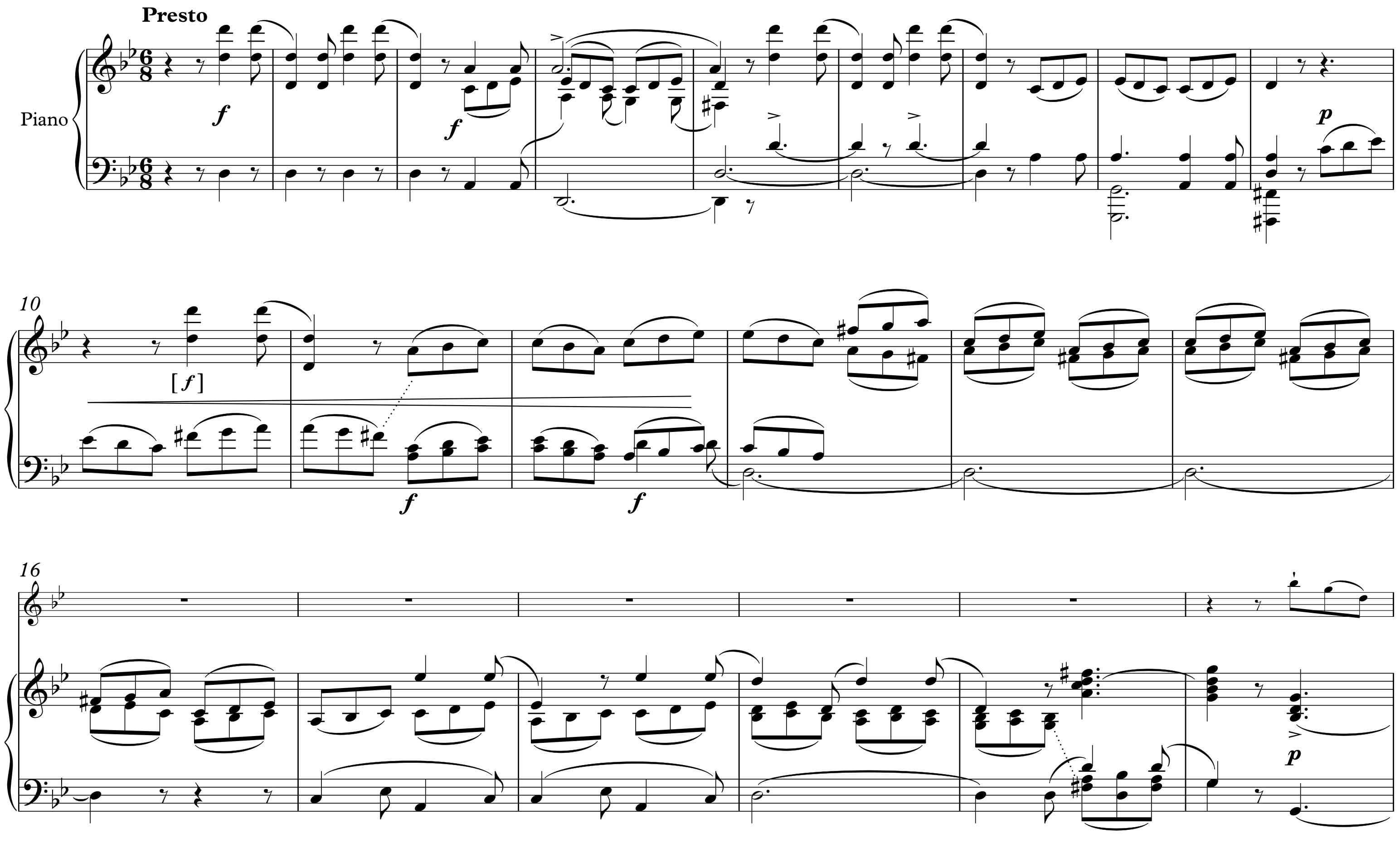 What can the violin and orchestra version tell us?

For the inquisitive performer or scholar, however, taking some time to consider these sig­ni­fi­cant differences between the two versions can be worthwhile. They may point to Wieniawski’s practical and/or artistic considerations toward each type of ensemble, and even to ideas about the conception of the composition itself. 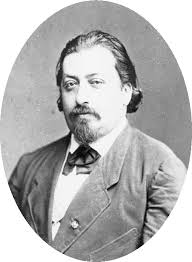 Until 1855, Henryk Wieniawski usually performed on­stage with his very capable pianist brother, Józef. They had even composed together, resulting in an earlier o­pus, the Grand Duo Polonaise (op. 8 for Henryk and op. 5 for Józef). Therefore, either right up to or be­fore the Scherzo-Tarantella, which was composed in 1855, it is most probable that the pi­a­no parts in Henryk’s com­po­si­ti­o­ns had passed the critical judgment and pianistic pre­fe­ren­ces of Józef, who would be the one playing the piano. 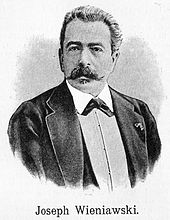 In other words, the longer introduction at the opening and the intricate accompaniment material in measures 271 to 301 and measures 317 to 347 pose questions as to whether there was an intention at some early point to give Józef a piano part that would attract at­ten­tion. This idea would not be un­pre­ce­den­ted in Henryk’s works. The Thème original varié, op. 15, for example, has several virtuosic piano passages in ac­com­pa­ni­ment of a vio­lin melody and a restatement of the theme that attracts attention to the piano.

However, with the parting of careers with Józef, Henryk could have had the need to re­con­si­der the longer introduction and potentially technically demanding and musically intricate Cantante / Scherzando episode. By the time the Scherzo-Tarantella was to be pub­lished in its violin and piano version, Henryk no longer had a constant pianist part­ner he could trust and depend on at every level, and this could have persuaded him to fashion the piano part of Scherzo-Tarantella with simpler demands. As much as this is completely speculative, it would offer a somewhat practical explanation for the much shor­ter and simpler introduction, and the Cantante (revised to Cantabile) re-envisioned in a more traditional format of melody with arpeggio accompaniment.

An episode fusing elements of both the Scherzo and Tarantella

Another idea, however, that has more far-reaching musical consequences rests on proof in the violin and orchestra version that Henryk had intended an episode fusing elements of both the scherzo and the tarantella within a framework of highlighting a beautiful vio­lin melody. This brings many potential questions into focus, including what Wieni­aws­ki may have intended to convey with the title of Scherzo-Tarantella, and the depth of mu­si­cal thought he invested in this showpiece.

As discussed with examples above, in the Cantante / Scherzando, the solo violin presents a lyrical melody while accompanied by a scherzo-like passage that recombines key e­le­ments from the opening tarantella. We can also note that it is done in much the same way here as in the introduction (of the same violin and orchestra version). Meanwhile, from a structural point of view, the Cantante / Scherzando is the second lyrical episode placed in the major (here, in D major) before returning to the tarantella in the home key of G minor. Structurally, therefore, the Cantante / Scherzando is placed in the most pro­mi­nent position of the piece. We should consider that the varied repetition of the Can­tan­te / Scherzando sequence (i.e. measures 271 to 301 and measures 317 to 347), as well as its intentional layered complexity, is further evidence that Wieniawski was cons­cious of the significance of this episode.

We can observe then, that both the violin and piano version and violin and orchestra version reflect the stylistic features of both a tarantella and a scherzo with its “trio sec­tion” contrasts. But only the violin and orchestra version attempts a simultaneous syn­the­sis of the two genres. With the Cantante / Scherzando, Wieniawski demonstrates, at the heart of the piece, a literal realization of the title’s promise.

The important question, of course, still remains as to why the violin and piano version does not include some form of this ingenious fusion of the scherzo and tarantella. Per­haps Wieniawski was not entirely satisfied with his ambitious experiment, or found it too unwieldy and fussy in the format of a violin and piano ensemble. The case could also be made that altering the Cantante / Scherzando into the Cantabile in the violin and pia­no version persuaded Wieniawski to reconsider its structural and musical relationship to the opening introduction. In other words, a musically simplified Cantabile could have been a factor in simplifying the introduction.

Finally, we cannot ignore the reality that Wieniawski did not publish the violin and or­ches­tra version, and that the Scherzo-Tarantella as published in its violin and piano form was the version Wieniawski authorized for release to the public. Knowledge of the vio­lin and orchestra version can only increase our appreciation of Wieniawski’s depth of compositional thought and his acute powers of judgment and discretion. His decisions re­sul­ted in the well-known violin and piano version of Scherzo-Tarantella that we cherish today.

The article was written by Dr. Ray Iwazumi.

4 Responses to »Wieniawski’s Scherzo-Tarantella, op. 16: Structural designs for a synthesis between a tarantella and a scherzo?«