In connection with the general blog post by Dominik Rahmer on ‘Set­ting, version, arrangement – how far may Urtext go?’ (October 2012), we are going to deal here with a special case of ar­range­ment. Anyone searching the Internet under ‘César Franck Cello So­na­ta’, will get more than 80,000 results. But already from the head­ings on the pages we will quickly see that this ‘cello sonata’ offered is an arrangement of the famous Violin Sonata in A Major. A look into the catalogue of Franck’s works gets rid of the last doubt: Franck did indeed plan a cello sonata in 1890, the year of his death, but no longer got around to completing it. So, it can only be the cello version of the Violin Sonata that is meant by ‘cello sonata’. This is a version arranged for cello by Jules Delsart.

At first glance, the cello version appears to be only one of many settings that the Paris pub­lish­er Julien Hamelle unloaded on the market in the wake of the Violin Sonata’s suc­cess. The title page of an early 20th century edition lists editions for piano solo and piano duet, for piano and flute as well as for piano and viola. What is more, the later promotion of arrangements of other works shows that the publisher was not shy about offering the best-known Franck compositions in settings that were then popular. 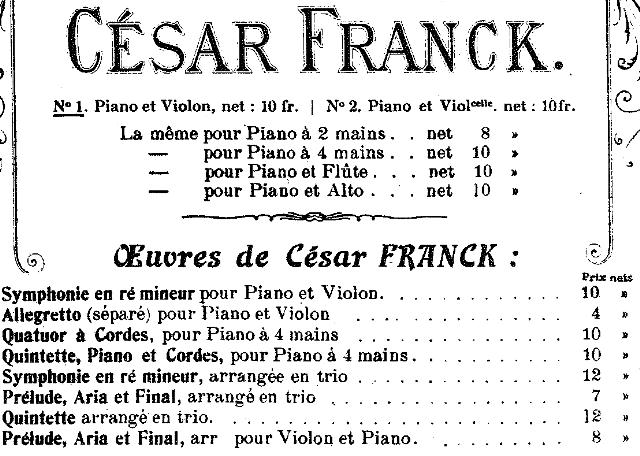 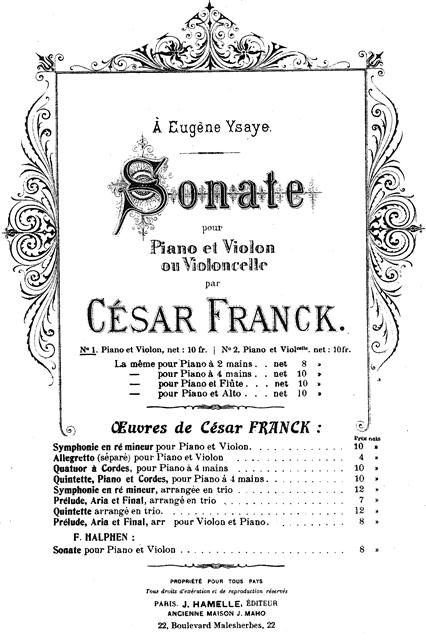 At second glance, the version for piano and cello is, though, clearly distinguished from the other settings. That is to say, it entered the main title. The original ‘Sonate pour Piano et Violon’ now became ‘Sonate pour Piano et Violon ou Violoncelle’. In his great Franck bio­graphy Joël-Marie Fauquet reports on how there came to be a cello version. After a performance of the violin sonata in Paris on 27 December 1887, the cellist Jules Delsart, who was actively par­ti­ci­pa­ting in this concert as a quartet player, was so enthusiastic that he begged Franck for permission to arrange the violin part for cello. In a letter that Franck wrote his cousin presumably only a little la­ter, we read: ‘Mr Delsart is now working on a cello arrangement of the sonata’.

According to this, the arrangement for cello did not proceed from the publishing house, but from a musician who was a friend of the composer’s (both taught at the Paris Con­ser­va­to­i­re). There is also no doubt about Franck’s consenting to this arrangement. Since the piano part remained unchanged, Hamelle did not publish the arrangement at the end of January 1888 in an edition all its own, but simply enclosed the cello part with its se­pa­ra­te plate number in the score given a new title page. 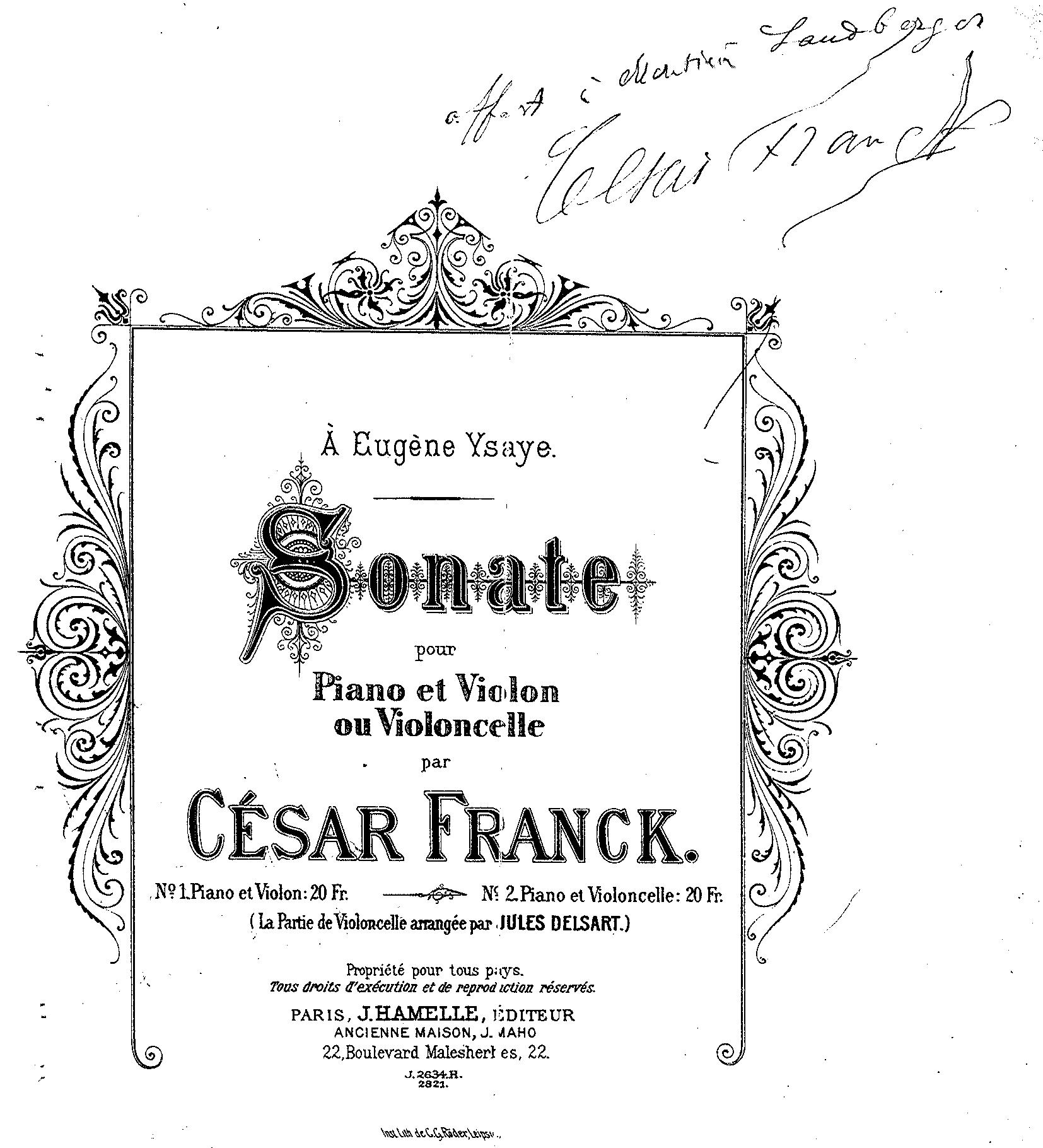 Today, unfortunately, we do not know of any documents for the cello version other than the letter excerpt quoted. So we do not know more specifically whether and to what extent Franck was consulted on the arrangement, merely that he was in contact with Delsart. We know just as little about whether Franck was asked to agree to the wording of the new title page. From then on the sonata was offered in two more or less equal variant settings (‘N° 1. Piano et Violon, N° 2. Piano et Violoncelle’), yet with the explicit reference to the arranger of the cello version. Even so, Franck probably had nothing against the title page in that he gave away ap­pro­pri­ate copies to friends and acquaintances. We can see this in the illustration above, with the dedication to the musicologist Adolf Sandberger.

But is giving consent to the arranger and having contact with him enough to justify an Urtext edition of the cello version? The answer to the question also, of course, depends on the kind of arrangement. Comparing the two solo parts demonstrates that Delsart kept very closely to the original and limited himself to transposing the violin part to the lower register. In only a few passages are there exceptions where Delsart adapted the music to the technical playing conditions of the new instrument, as at the end of the second movement, for example:

In the next to last measure, Delsart relocated the tone f-sharp downward, since this is so much more comfortable to reach. In the last measure, he added the tonic d to the closing chord in order to have the full triad sounding. Although as mentioned, we have no evi­dence for it, we may assume that Delsart probably would have convinced Franck by play­ing the cello version in advance. The expressive and sonorous passages used in the so­na­ta certainly do not show to any less beautiful advantage in the lower register, as, for in­stance, a recording with Mischa Maisky and Martha Argerich shows.

For a critical new edition of the cello version such as is in progress in the Henle pub­lish­ing house (HN 570), a consequence of this fact is that the sources of the original edition are authoritative for the piano part exclusively and for the cello part predominantly. The printed cello part of necessity represents the single source merely for Delsart’s few in­ter­ven­tions. In this respect, an ‘Urtext’ edition is justified in the present case, even though we have in front of us neither a genuine cello sonata nor an arrangement stemming from the composer himself.

2 Responses to »‘Pour Piano et Violon ou Violoncelle’ – Is there a cello sonata by César Franck?«