Posted on January 6, 2014 by Norbert Gertsch

In May and June 1931 Sergei Rachmaninoff composed his famous and much-played piano ‘Variations on a Theme by Corelli’, Op. 42. Only: The theme is not by Corelli! And what do we now call the child? Better, perhaps, ‘La Folia’ Variations …

Rachmaninoff was supposed to have become acquainted with the theme of his variations through Arcangelo Corelli’s Op. 5, Sonate a Violino e Violone o Cimbalo [‘Sonatas for Violin and Continuo’], that had appeared in Rome in 1700 and quickly spread. The final work following eleven sonatas in Corelli’s opus has the theme adopted by Rachmaninoff, called there ‘Follia’, with 24 variations: 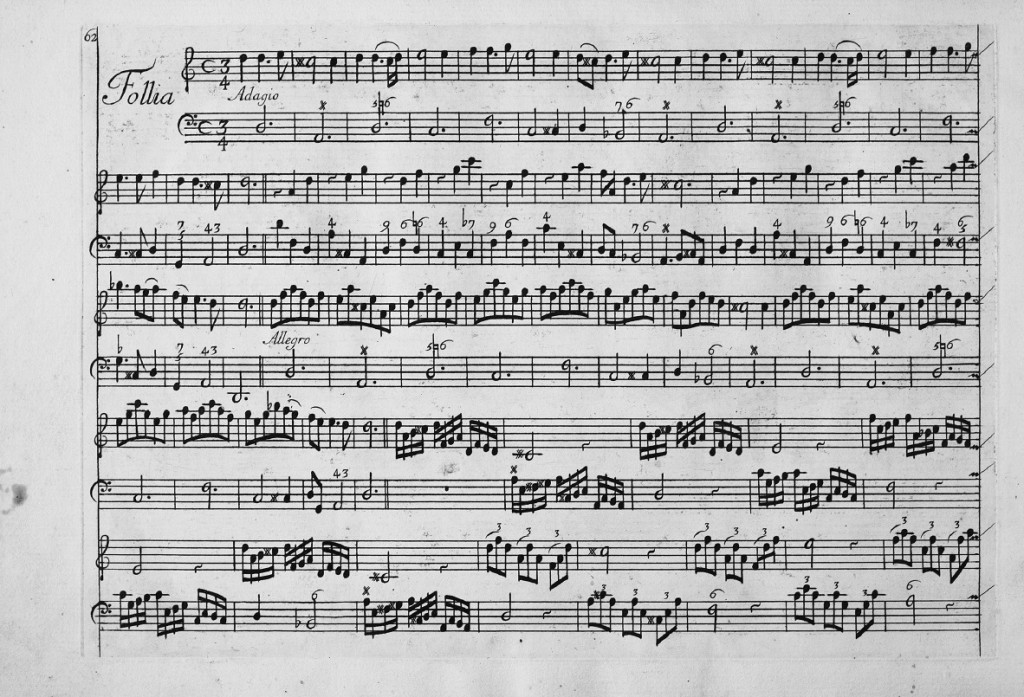 However, unlike what Rachmaninoff assumed, the Italian composer did not compose this theme. ‘Corelli Variations’, the popular title entrenched today for Rachmaninoff’s Opus 42, is in this respect not entirely correct. A wildly noisy Portuguese dance called ‘Folia’ can already be established at the end of the 15th century. Around the same time there also developed a harmonic-melodic formula of the same name that, however, can no longer be linked to the wildness of the dance. It was very much in vogue in subsequent centuries, and – undergoing constant modification – was especially utilised as a theme for sets of variations. An impression of this popularity is conveyed by the fantastic data collection of the website ‘la folia, a musical cathedral’, there especially the chronological list of the variations known to have been set to music.

Perhaps Fritz Kreisler – Rachmaninoff’s friend, duo-partner and dedicatee of Opus 42 – made Corelli’s ‘Folia’ composition known to the composer. In his publication series Klassische Manuskripte für Violine und Klavier [‘Classical Manuscripts for Violin and Piano’], Kreisler had published in 1927 his own edition of variations from Corelli’s Opus 5 .

It is also conceivable that Rachmaninoff came into contact with the ‘Folia’ by way of the popular French title ‘Folies d’Espagne’. Franz Liszt had used the musical material under this name in his Rhapsodie espagnole – a work that Rachmaninoff recorded in 1923/24 (though the recording was never released for publication):

Rachmaninoff first learned that the theme did not come from Corelli through a concert review of his recital in Carnegie Hall on 7 November 1931. As a result he was forced to change the originally-planned title, ‘Variations pour piano sur un thème de Corelli “La Folia”’, notated on the extant engraver’s model. In the first edition published about the turn of the year 1931/32, the jacket and inside title simply read ‘Variations’. Nonetheless: Corelli was and remained the inspirational source, and the caption title of Op. 42 certainly deliberately reconnects the work to Rachmaninoff’s actual theme source:

A recommendation to conclude, Vladimir Ashkenazy in this impressive recording! Is anyone after that still interested in whether the work is now called Corelli Variations or La Folia Variations?