The last blog posting on 6 January has already let it be known: we are welcoming Sergei Rachmaninoff as a new composer in the Henle catalogue! With the expiration of copyright on 1 January 2014, works in Germany and many other countries of the EU and worldwide have now come into the public domain, so that there is no longer anything standing in the way of a new critical edition of his compositions.

The first works that we are now presenting in January as brand-new Urtext editions are the Corelli Variations (HN 1206), the Études-Tableaux (HN 1202), the 24 Préludes (HN 1200) as well as from the latter, a separate single edition of the Prélude in c sharp minor, Opus 3 No. 2 (HN 1211), certainly the best known of all Rachmaninoff’s pieces.

In the case of a much-played ‘warhorse’ like the c-sharp-minor Prélude, you would think that there could no longer be any questions open to answer. Yet probably just its enormous popularity and its global spread soon after its composition in 1892 led to the fact that to date a blatant error has not been eliminated.

It is a matter of the 2nd eighth-note chord in the left hand in measure 5 that is notated, depending on the edition, now as d sharp, now as d. Each sounds plausible – but which is right? If we consider the autograph (the chord in question is marked here with the red arrow), no accidentals at all are to be seen before the chord, so based on the general key signature the pitches are d sharp1 and d sharp2: 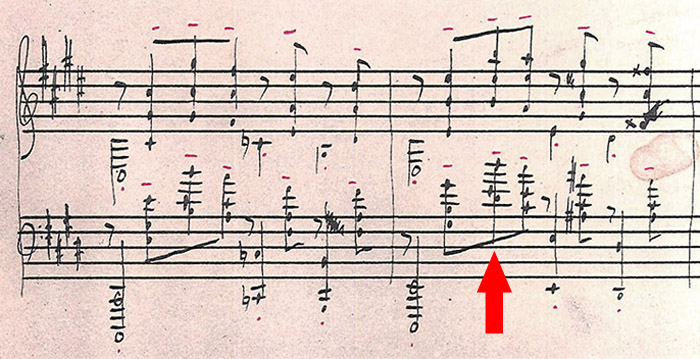 But astonishingly enough, the Russian first edition by the Moscow publishing house A.Gutheil gives natural signs and changes these to d1 and d2, respectively:

Whether this deviation goes back to a deliberate change by Rachmaninoff in the galley proofs (not extant), or was instead an arbitrary intervention by the engraver to whom, perhaps, the clash of seconds, d sharp–e appeared too dissonant, can no longer be clarified.
But it is interesting that in later issues just this spot was repeatedly changed and now sharps were specifically placed before the notes concerned as cautionary accidentals, so to speak:

We can also recognise the later change from the fact that the form of this sharp differs slightly from the rest of the sharps on the engraved plate, since another punch was obviously used meanwhile; in addition, the leger lines are slightly damaged at the left.

That this correction is according to Rachmaninoff’s wishes is also confirmed by all later editions of the Prélude to appear from Gutheil; newly-engraved by Breitkopf in Leipzig was, in particular, the whole cycle of the 24 Préludes, opening with the c-sharp-minor Prélude – including the corrected d sharp:

(And in case you have grown up with the so-called d and are still ever in doubt – on YouTube you can listen to three recordings made personally by the Master: all of them with the d sharp…)

So, no problem, you would think – the out-of-date copies were soon off the market, certainly revised without exception by Gutheil’s new editions so that the correct d sharp would have become established. Disastrously, though, Gutheil’s edition of 1893 was still not subject to the international copyright protection, so that outside of Russia the c-sharp-minor Prélude was being reprinted (and arranged) worldwide to the publishers’ hearts’ content.  And adopted in most of these editions is the obsolete d of the first edition – one example, amongst many, is this early English competing edition of 1896 ‘edited by John A. Preston’:

Since many of these editions are still reprinted unchanged (or served as models for new editions and arrangements), the wrong pitch persistently survives to date in the concert hall and on recordings. Thus, a further good reason always to have recourse to reliable Urtext editions…