Posted on February 17, 2014 by Norbert Müllemann

What music do continuo players play from?

This question might at first appear trivial. Presumably every pianist nowadays has al­ready once accompanied baroque chamber music from a basso-continuo part. In the G. Henle Verlag – and not only at our publishing house – this part is basically a stave for the left hand. It contains the bass part, mostly with numbers indicating which chords are to be played by the right hand in each case. The stave for the right hand suggests in small type how the harmonisation is to be realised (see the following example, the beginning of Bach’s Trio Sonata BWV 1038)

The continuo part in the source (a Bach autograph!) looks, however, like this

How come the G. Henle publishers, who are dedicated to the idea of Urtext and musical sources, have here gotten so far away from the notation in the source?

That has to do primarily with performance practice. At Bach’s time it was customary for the continuo player to play from a single-line part on a keyboard instrument (or even on another harmony instrument such as the lute). The numbers were always enough to show the musician what harmonies were to be played with the bass line. Such a part also had a great advantage: since it was not notated in score form, the musician would not have to turn pages so often. 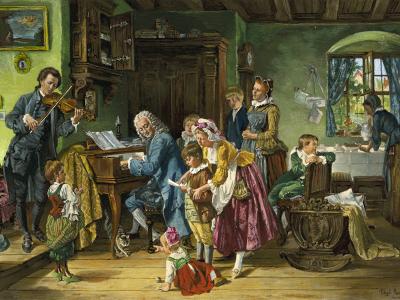 Nowadays only specialists still master this art of improvised continuo. Pianists today mostly need assistance, which is why editions cur­rent­ly offer ‘how-to’ ad­vice. Henle prints this advice in small type to make it clear that it is an extra not based on the sources.

More recently, though – historically informed performance practice is by now mainstream – more and more musicians would like to be able to play from a ‘correct’ continuo part, i. e., a one-line part without the suggested re­a­li­sa­tion that is difficult to ignore while im­pro­vi­sing. We have therefore decided to include a true continuo part as an extra in our most recent Bach edition, the above-mentioned Ur­text edition of the trio sonata BWV 1038, which – in absolute purist fashion – has just the bass line with numbers. As a plus feature, though, we have published along with it the solo parts in small type, which is a great help for the continuo player.

Thus the pianist/cembalist can make music from this continuo score – but not just he or she alone. The continuo group does indeed consist of not only a keyboard instrument, but is usually also augmented by a bass solo instrument (at present scored mainly for a cello). Now, if the pianist would rather play from the realised score, the cellist can pick up the continuo part. For them it is also enlightening to be able to follow the score and numbers for harmonisation.

But what happens when both cellist and pianist/cembalist prefer the continuo part? At Henle we would not want to be unprepared, just in case. Our edition includes, also extra, a bass part (without numbers and without small-type solo parts) from which the cellist can make music when the keyboardist holds on to the continuo score.

That all parts are equipped with convenient page turns (the continuo score was even produced in the form of a practical foldout), goes without saying of course for us.

So, our new Bach really comes opulently endowed. We even offer the violin part twice: the first is notated in scordatura to go along with the source, and the other is transposed for those violinists who don’t want to retune their instruments. We are allowing our­selves this luxury in order to meet as far as possible the differing needs of various ensembles – from laypeople to professionals, from music-making at home to performance in the concert hall.

Through reprints we are updating comparable titles from our catalogue that still don’t come with these deluxe extras!