Observations on the necessity of body language in piano playing 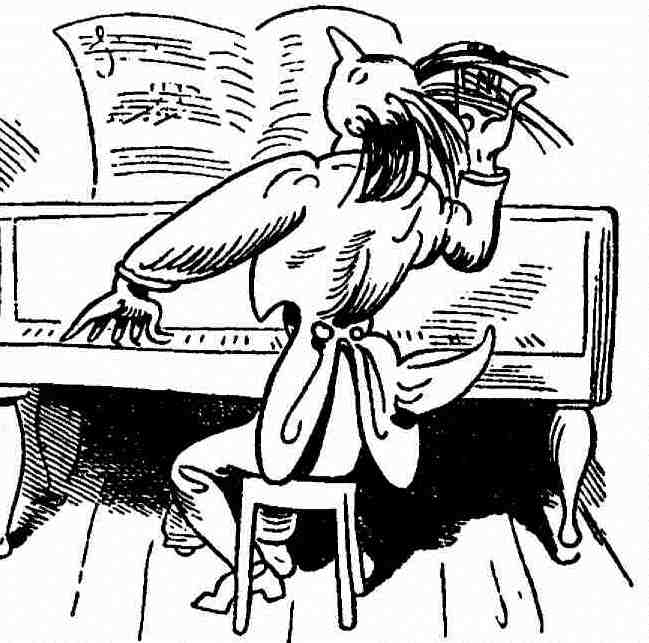 For today, an altogether practical subject for those of us who play piano and are pianists: Perhaps it has still not gotten about every­where that piano playing appeals to the eye more than to the ear! Pianists have then a fair chance of winning competitions only if they re­in­force their playing with expressive body movements and facial expressions. A current, reportedly serious study proves it: That is to say, upon merely watching soundless (!) com­pe­tition shots, lay people as well as pro­fes­sio­nals chose the same (!) winners as the expert panel of judges at the same competition. In other words: the eye, not the ear pre­de­ter­mines solid piano playing. Or put another way: The jury, wearing earplugs, would also have nominated the same winner. Now that’s something to really make you think….

Personally, I’m surprised at the results of the study because such “antics” rather distract from what is essential. On the other hand, I am also reminded of a comment by Alfred Brendel as to the enormously suggestive effect body-language signs can have on the listener. I’ll be looking briefly into both aspects in the following.

We may shrug off Lang Lang’s extreme body language as unnecessary fuss. But its effect on most listeners is just for that reason so magical. He would have been able to win any piano competition! Here is a splendid example of Lang Lang’s body-language (mass-)sug­gestion in a live performance of the 2nd Hungarian Rhapsody by Liszt (it’s worth­while watching it to the “bitter end” … especially in terms of today’s blog subject):

The pianist Marc-André Hamelin would be in turn hardly likely to win a competition. His calm, almost stoical bearing is in greatest contrast to Lang Lang’s: The same Liszt show­piece is put through its paces in technically admirable mastery, far more commandingly and musically than Lang Lang plays it, but with ramrod-stiff focus (also worthwhile viewing on YouTube and listening to the whole piece):

Without doubt the very best live recording of this piece, with respect, that is, to the body-language aspect, is certainly the one by Victor Borge ☺:

All musicians, men or women, will of course have to decide for themselves how much they would be willing to turn themselves inside out for the audience. But there is now definitely a music-scoring situation where one “has to” be moving around in order to have the desired effect on the audience: The sustained piano sound calling for crescendo and/or decrescendo: 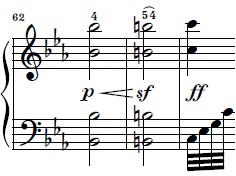 
What might Beethoven have meant with this strange crescendo directive and how on the piano do I make the sound swell from p to the sf that the next measure asks for? I do not know of any such “unplayable” directive for dynamics in piano music “before” Beethoven. But it does occasionally occur with Beethoven (I have also found such passages in Schu­bert, Schumann, Liszt, Rachmaninoff). Beethoven seems to be the first of all who pushed the sonorous limits of the keyboard instrument in this manner. Beethoven’s autograph of the Piano Sonata op. 7 is lost, but this unrealisable p with following crescendo is ac­tu­al­ly in the first edition. Within the passage’s context it nevertheless seems clear what Beet­hoven meant (heard/intended), but notated strangely: that is, a “big” crescendo over four measures to the C-minor fortissimo (m. 64).

A similar, “impossible” passage is to be found right at the start of the first movement in the Piano Sonata Op. 31 No. 3. Again, no Beethoven manuscript exists, and we are dependent editorially on the first edition. The odd-appearing cresc. for the sustained chord in measure 4…

…does not have any corresponding parallel passage; it is already different from the quar­ter beats repeated just before. I read the passage as like that in the 4th movement of Op. 7: Beethoven wants a “big”, drawn-out crescendo up to the sf in measure 6 (and so also at the movement’s numerous other passages). One last Beethoven passage: 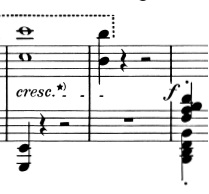 
Here, we must know that the cresc.— shows up only in Beethoven’s autograph of the Les-Adieux-Sonata op. 81a, but not in the first edition that he corrected. Alfredo Casella, in the commentary to his Ricordi edition (1919/20), would advise simply ignoring this cresc. and playing the subsequent octave b♭ pianissimo – because the crescendo cannot be executed.

Alfred Brendel now offers a solution worth considering as a matter of principle for this kind of problem of how we might appropriately be able to play such “unplayable” pas­sages: With the aid of body-language gestures. He writes:

“The sound of longer notes on the piano can be modified (1) by means of the accompanying parts where such are present, (2) by means of syncopated pedals and (3) by means of a process of movement displaying the pianist’s cantabile conception. These movements have an impact essentially on the touch of the note itself, but also on its preparation and continuation. Many crescendi on a single note can be conveyed in the concert hall only by suggestion.” (Alfred Brendel, Nachdenken über Musik, Munich, 1982, p. 35).

According to this, body language is very important not only for winning potential com­pe­titions, but no, also for realising the music text. Apparently, only the piano player who can be moved by the composer’s intention of the really inaudible – emotional, who can also be correspondingly – bodily – moved, and only whoever is moved in such a way can also move the others, the listeners who above all are also spectators. These actually think then of experiencing a sustained surging and receding piano sound, even though in reality it is not to be heard.

Why not give it a try sometime. 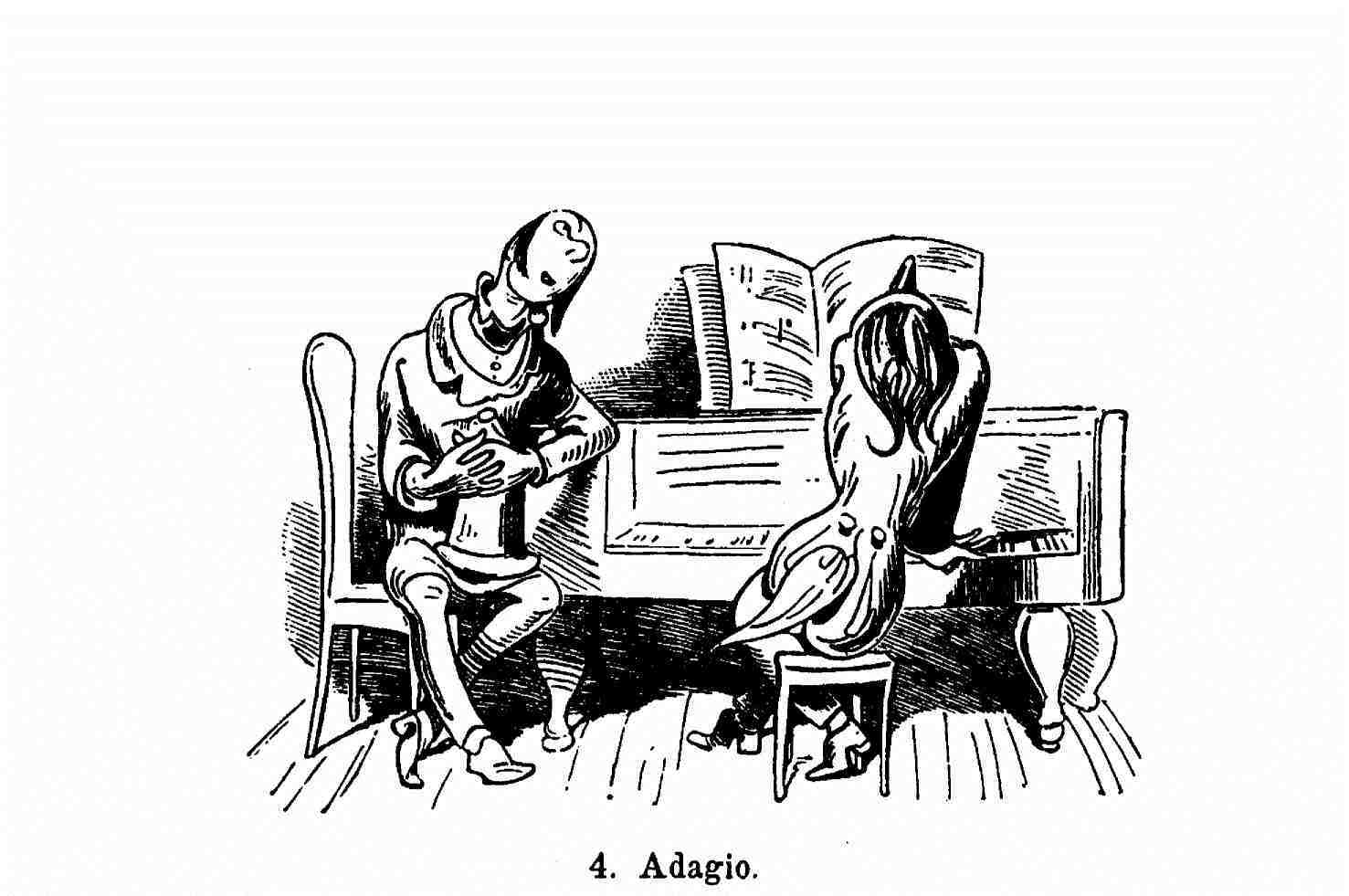 One Response to »Listeners are also only human«