The basic idea behind an Urtext edition is well known; it is a composition edited in such a way that it corresponds to the composer’s will, ending up the ‘definitive version’ as a rule. Yet what about having to consider two wills und a ‘pair’ of definitive versions…?

This last year we have been increasingly confronted with this question, for in 2013 arrangements of original works have been appearing for the first time in the G. Henle publishing house. This, though, is only under the strict condition that the arranger would also belong to the ‘great masters’ and that, in turn, the arrangements themselves would present high-ranking artistic works. Admitted to our catalogue up to now have been three very challenging piano transcriptions: two Liszt arrangement of compositions by Richard Wagner (Isoldens Liebestod [‘Isolde’s Love Death’] HN 558 and the Spinnerlied [‘Spinning Song’] HN 585) as well as the famous Bach Chaconne for violin solo in Ferruccio Busoni’s no-less-famous piano version (HN 557).

Since on principle these arrangements follow the original exactly (certainly, they are not free paraphrases, fantasies or variations on a theme), occasional differences from the model carry here special weight and demand careful scrutiny: Is it an intentional ‘addition’ on the part of the arranger? Or only a mere slip that the editor must put right? Two examples should illustrate this:

In his piano arrangement, Ferruccio Busoni embedded basically unaltered the original violin part of J. S. Bach’s Chaconne (from the Partita for Violin in d minor, BWV 1004), although in keeping with the piano he freely adapted certain specifically instrumental figures as arpeggio passages. Found at the junction of measures 172/173 is, nevertheless, a striking discrepancy in the melody line (cf. the notes marked in red in the illustrations): here in Busoni instead of the original e–a is d–c sharp:

Busoni was in fact at this point still not acquainted with the autograph, yet all printed editions of the Bach Chaconne that could have served him as models also have e–a. Upon closer consideration it does not appear plausible here to take this as an oversight by Busoni – a distinguished authority on the works of Bach. For differing now are two notes and this in a manner definitely making sense, suggesting Busoni’s compositional view: Whereas Bach makes the cadential descending fifth to the root of the A-major chord an harmonic re-enforcement of the unaccompanied solo part, Busoni’s voice-leading presents a so-called tenor clausula to c sharp, the major third. Since in his piano version the chord root is already sounding prominently in the bass, sonorous balance was for Busoni certainly more important than excessive faithfulness to the work. Try it once on the piano – the original e–a in this context would sound oddly ‘hollow’.

Essentially more controversial and debated by pianists to the present day is, on the other hand, a striking divergence in Isoldens Liebestod, i.e., Franz Liszt’s piano transcription of the closing scene from Richard Wagner’s Tristan und Isolde. The bone of contention is the 2nd bass note in measure 78 that Liszt notated as d sharp, whereas in Wagner’s score there is an f sharp in this broken chord of the harp part (see the music example). 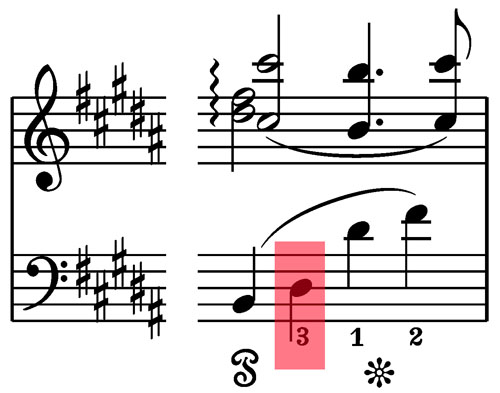 Unlike in the above-mentioned case with Busoni, where the sonorous improvement is obvious, the d sharp here seems to be an unsatisfactory variant: originating between the 2nd and 3rd notes is a large octave leap; repeated thus, moreover, is the third of the B-major chord, which is unusual according to traditional rules of composition. Yet as much as it would be so very tempting intuitively to improve this putative ‘slip of a third’ to an f sharp – the philological results are plainly against it. The autograph unfortunately does not survive complete and can be of no further help for this measure, but all other sources unanimously give the d sharp.

Interestingly enough, the Breitkopf & Härtel publishers already ran up against this discrepancy during the proofreading phase of the first edition in 1875: the arranger and editor Albert Heintz (who had been commissioned by Breitkopf to do an arrangement for 2 pianos, 8 hands) recorded in the margin of Liszt’s revision copy: ‘? According to the piano arrangement by H. v. Bülow this must read as f sharp. The score will establish it.’ We can certainly assume that the publishing house clarified this question with Liszt before publication ensued a good half year later, and the d sharp was deliberately left.

The pianist and Liszt pupil August Stradal, who edited Isoldens Liebestod within the context of the first collected Liszt edition, also defends this note on good grounds (see A. Stradal, preface to Franz Liszts Musikalische Werke, III/1: Bearbeitungen und Transkriptionen für Klavier von Werken Rich. Wagners, Leipzig, 1911, p. V). Here in the critical report Stradal discloses the important information that during lessons Liszt, too, did not ever revise the d sharp in question, and he refers to the frequent small differences that Liszt himself permitted in his transcriptions. And Stradal cites a further good argument: Liszt’s original fingering 3–1–2, is ideally suited to d sharp.

In both cases presented here the editor then decided in favour of the ‘second master’, thus favouring the composer of the arrangement rather than of the original. But we shall certainly run across cases where the scale will also tip in the other direction. Do you know of comparable places in the literature? Or perhaps you’d like to request arrangements that we should edit in the future? If so, then please drop us a line!