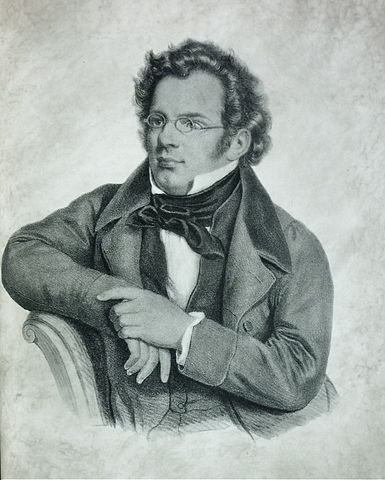 Anyone working with Schubert’s autographs inevitably runs up sooner or later against the famous accent ques­tion: that is, more precisely, the question of whether the sign notated at this or that passage means an accent or a decrescendo hairpin. Although both signs in modern music notation are very clearly distinguished one from the other – an accent is placed directly above the note head, the hairpin below or above the stave –, they are closely related in origin. When in the expiring 18th cen­tu­ry the signs for getting louder or softer (cres­cendo and decrescendo hairpins) arose as alternatives or sub­sti­tutes for the written-out directives crescendo and de­cre­scen­do, the > sign evolved as an abbreviated de­cre­scen­do hairpin. The correlation becomes graphic for instance in Beethoven’s songs.

The first example showing an accent for the word “Herz” actually presents an extremely abbreviated decrescendo hair­pin at the next note, as can be deduced from the parallel hair­pin in the piano:

At another place there is an ac­cent, completely clear in the modern sense, where Beet­hoven notates the > sign for the vocal part, but the typical sfp for the piano: 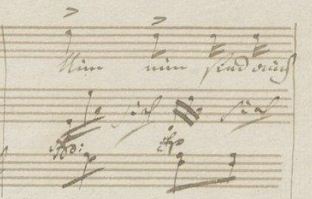 Whilst both signs can in general be clearly distinguished from each other, Schubert’s specific way of notating involves prob­lems. For representing ac­cen­tu­a­tion he also uses the ab­bre­vi­a­tions sf, fz, ffz, sfp or fp, though increasingly also the accent sign >. Usage of ab­bre­vi­a­tions and symbols is mostly as synonyms; combinations ap­pear reinforcing (for example, fp with >) or even redundant (fz with >). Schubert, unlike Beethoven, Mendelssohn or Schumann, does not, however, place the > consistently at the note head or above the note, but wherever space is available below or above the stave, which very much complicates distinguishing it from the hairpin dynamic signs that he proceeds with all the same.

The new edition recently published by Henle publishers of the fa­mous Octet D 803 from 1824 (HN 9562; HN 562) offers the op­por­tu­ni­ty to play new variations, so to speak, on this old theme, for accents and dynamic signs in literally lavish a­bun­dance are to be found in the Octet. The complete autograph pre­served today in the Wienbibliothek (formerly Stadt- und Lan­des­bib­li­o­thek in Vienna), from which the subsequent examples are taken, can be viewed online. For easier orientation: Schubert notates the instruments in the order of high strings – winds – low strings, thus: (1) violin I, (2) violin II, (3) viola, (4) clarinet, (5) bassoon, (6) horn, (7) cello and (8) double bass.

Ideally, the accent in Schubert differs from the decrescendo hairpin in length as well as also direction. Accents are shorter and tend upwards like arrows pointed towards the notes or the note heads. This can be very nicely observed in the first example in the clar­i­net part (4th stave) where accents (m. 16) and decrescendo hairpin (m. 17) follow each other. That a decrescendo hairpin is meant in measure 17 also further emerges from the identical sign notated for the horn (6th stave), correspondingly preceded by a crescendo hairpin: 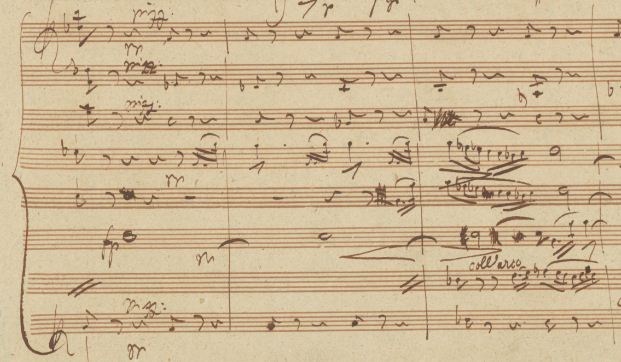 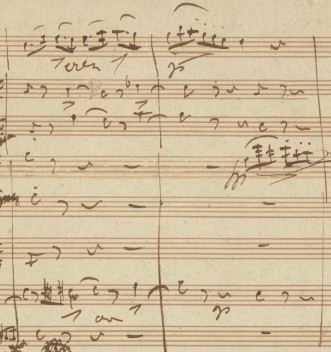 But all passages are, unfortunately, not so clearly configured; in par­tic­u­lar, the two formal attribution cri­te­ri­a – length and direction – are not in effect everywhere. We find just two pages later in the autograph a sign in violin I (stave 1, m. 33) and in the clarinet (stave 4, m. 33) that has to be a decrescendo according to length and direction (see also the difference from the accents, m. 32). The context, though, leaves this in­ter­pre­ta­tion in some doubt. Be­tween the accents in m. 32 Schubert notated a cresc. for violin I, that is, the p at the start is a “subito p”, for which the accent is essentially more applicable than a subsequent de­cre­scen­do. The notated p thus cor­re­sponds to the fp in the same measure in the clarinet part – and the combination of fp and > is frequently encountered in Schubert. In this sense a case can probably be made for placing accents here in the edition – but the passage is far from being beyond doubt. 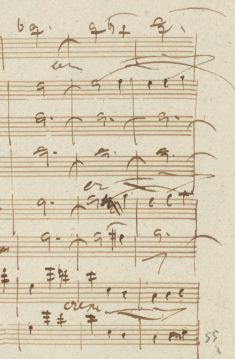 One final example, this time concerning the end of the 3rd movement. Beginning with pp we encounter a cresc. directive at measures 191/192, leading to p in meas­ures 194/195. The rise in dynamics in meas­ures 192/193 is then once again dif­fer­en­ti­at­ed through crescendo and de­cre­scen­do hairpins. This means that within a dynamic increase there is a temporary de­crease (which is repeated at a later pas­sage). Notated are cresc. and hairpins on­ly for violin I (1st stave), clarinet (4th stave) and cello (7th stave), yet of course these ought to be in force for all in­stru­ments. But confusing now is the effect of the isolated sign for the horn (6th stave) in m. 193 that from its length and dir­ec­tion would have to be a valid accent. Should Schubert have given the horn here an additional accent for reasons of sonority? Not entirely out of the question, but rather more suggesting from the whole context – violin and horn are in­deed running parallel – that it is a mistake.

Hence the passage is reproduced in the edition as follows: 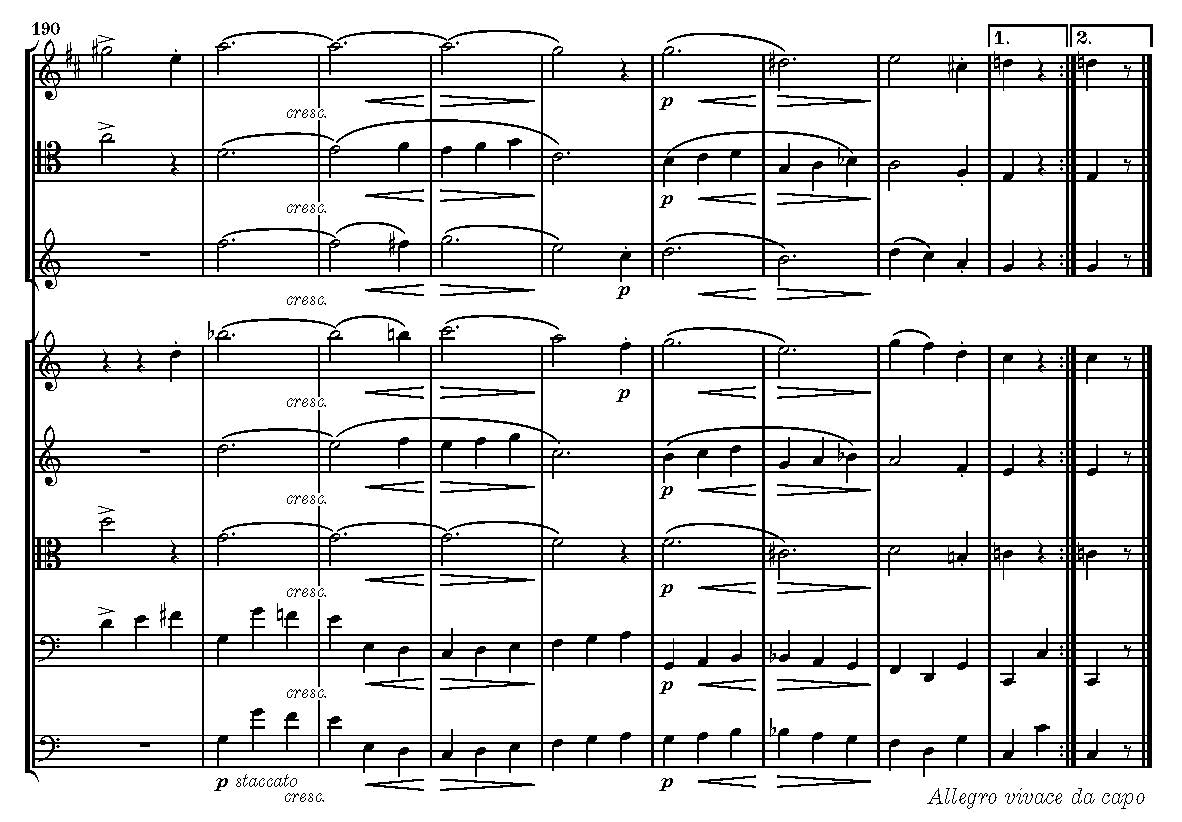 The few examples show that length and direction alone are not enough for interpreting the > sign, but also, unfortunately, the musical context does not always lead to the de­sired clarity.

Ideas on this old subject are therefore very welcome from your side!

2 Responses to »The accent question in Schubert: An old theme with new variations«