In the year 1821 three distinguished personalities met in Weimar: Goethe, Mendelssohn Bartholdy and Mozart. Mozart, of course, not in person, but in the form of his original manuscript that Goethe owned at the time (and that he identified on page 2 as “Mozart.”): 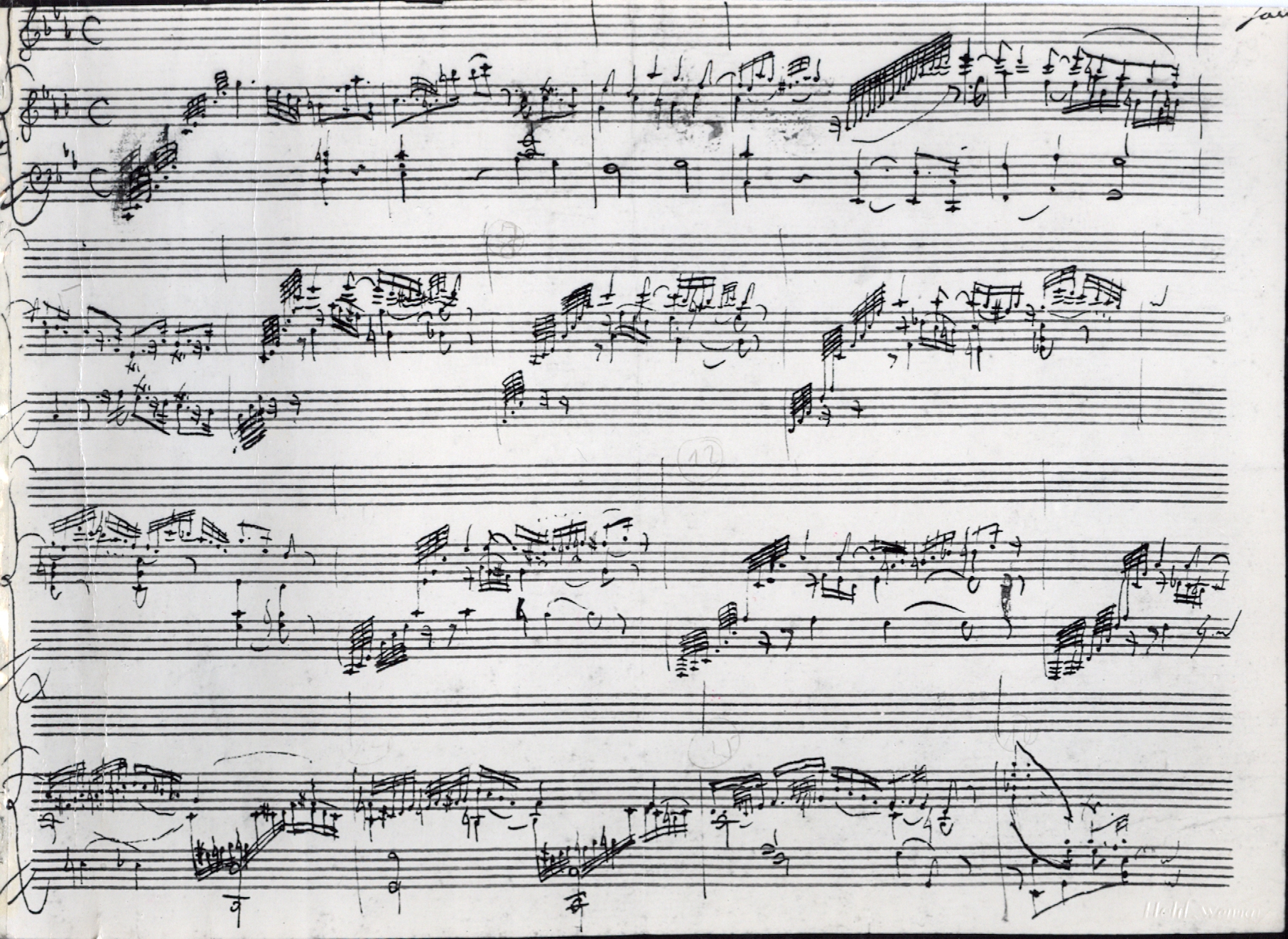 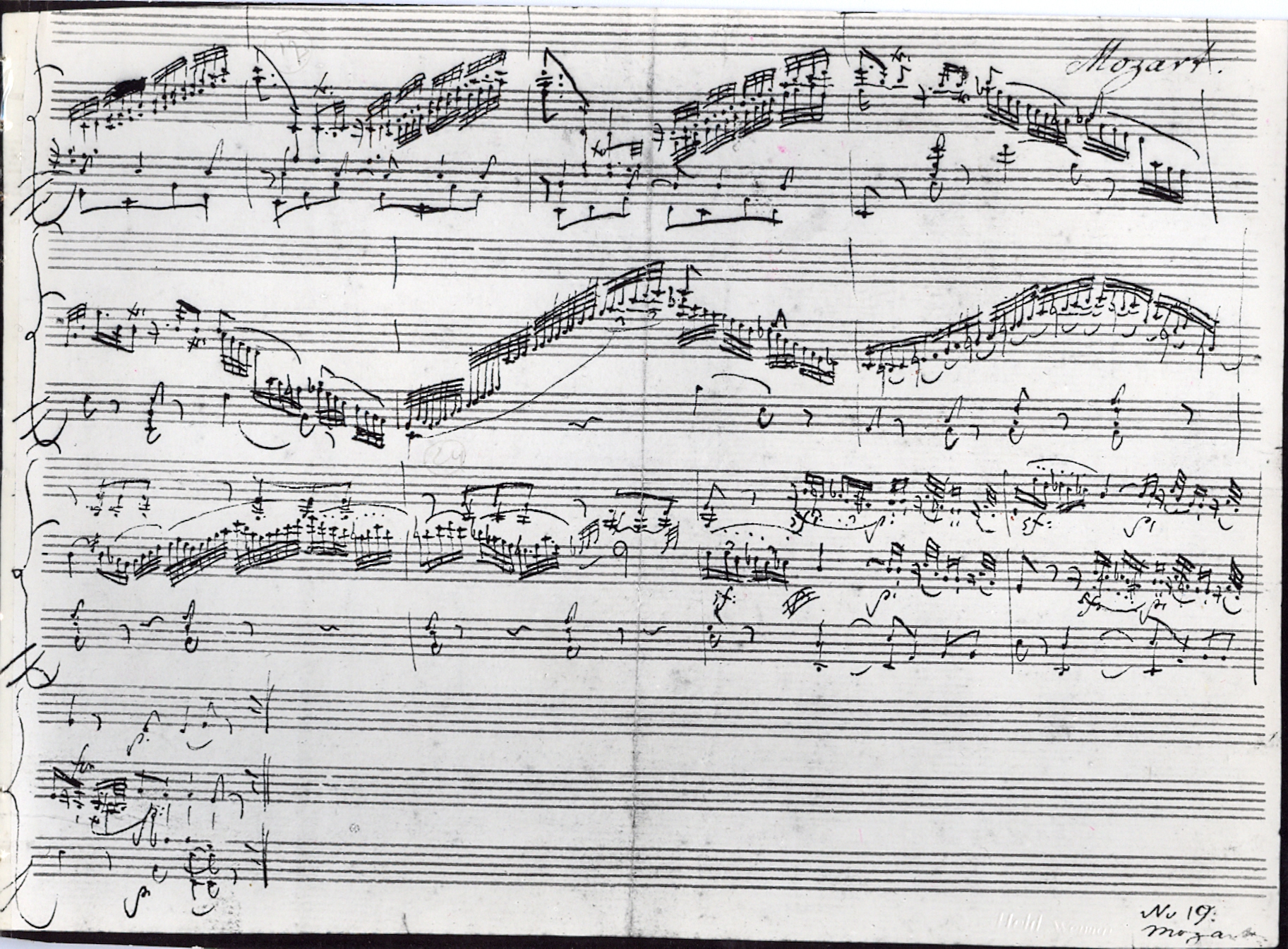 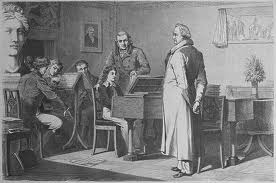 The young Mendelssohn with Goethe

This is a fragment of an extant piece in c minor, known up to the present as the piano “Fantasy in c minor” in the Köchel works’ catalogue under the number 396 (385f). The occasion of 1821, as well known as charming, is that with the Mozart fragment the elderly Goethe wanted to test the exceptionally gifted Felix, only 12 years old, who had come with Carl Friedrich Zelter on a visit to Weimar. Goethe had Felix sight read the Mozart autograph at the piano.  The boy must have acquitted himself well, for Goethe’s admiration of Mendelssohn (“new Mozart” – “my David”) is legendary.

And now, violinists and pianists, prick up your ears! This c-minor Fantasy K. 396 (385f) is shortly going to re-emerge in the G. Henle Verlag, but now in its original setting. It is not even a piano solo work at all, but a well-developed fragment for piano and violin. It was only established as a piano Piece owing to its very successful completion by Maximilian Stadler, and it is popular with many pianists on account of its “tragic” c-minor tone.

Some years ago this Stadler version was rearranged for violin and piano and published. However, such an arrangement certainly does not conform to Mozart’s intentions, but contradicts instead what Mozart notated. So, we asked the fabulous musician and eminent Mozart specialist Robert D. Levin to now finally resurrect this lovely piece in a proper independent form as originally scored. Requested, done – and now we are looking forward to what the musical world will say about it.

So as to whet the appetite still more for this special Urtext edition with all Mozart’s content-relevant violin fragments (HN 1039), we are here reporting some amusing background details worth knowing about the so-called c-minor Fantasy K. 396 (385f):

The Mozart fragment consists of two inscribed pages with 27 completely realised piano measures, thus going just up to the repeat sign. Sufficient space in the last accolade of the 2nd page would still remain for continuing the piece, but Mozart broke off here. Why, remains a mystery, because the previously notated measures are really great Mozart: From quasi-improvised first measures a fateful music is developed with acerbic chromaticism, reminiscent of a French overture through sharply dotted rhythms.

The piece has formally nothing to do with a “fantasy” (in comparison, for instance, with the two famous piano fantasies in d minor and c minor); in the final analysis it is the first part of a sonata movement that breaks off before the development starts.

Mozart’s autograph unmistakably shows a concurrent blank stave above the piano staves. We cannot in fact recognize what instrument it was for, because the handwriting has been heavily trimmed, but can gather from the last five measures of the second page that it is for violin and nothing else: Mozert writes double stops, in part with an open G string. (By the way, Mozart’s own dynamics occur only here.)

How then did this c-minor “fantasy”, known until today in the “wrong” piano version, come about? Well, there is likewise an interesting little anecdote about this. Maximilian Stadler viewed, together with Constanze Mozart’s second husband Georg Nikolaus Nissen, Mozart’s complete musical estate many years after his death. Included in it was a pertinent portion of unfinished works. Hence also our piece in c minor for piano and violin. Constanze sold the autograph estate to the Offenbach music publisher Johann Anton André sometime around 1800. Maximilian Stadler was probably requested by Constanze Mozart to compose to completion some of the most worthwhile fragments – so that they even could be performed and hence better marketed. Stadler had in the process probably especially fallen for the c-minor fragment, since contrary to contract it was not among the autographs in the bundle André bought. Instead, Stadler kept the Mozart autograph, copied it and composed from it his extraordinarily successful piano fantasy. He presumably had no use for the few original Mozart violin measures in it. And he handed over his “co-creation” to the owner of the Mozart autograph in an especially noble gesture: The c-minor “fantasy” appeared in 1802 from the Viennese music publisher Cappi with a dedication to her – for Constanze’s 40th birthday, I assume.

There are three untruths straightaway on the title page of this printed edition: It is neither a “Fantaisie” (but a sonata movement), nor is the setting for “Clavecin ou Piano-Forte” (without violin!), and the composer given, “W. A. Mozart”, wrote only the exposition (no mention is made that Stadler completed it). Here reprinted is the title page of a copy of the first edition that once belonged to Johannes Brahms: 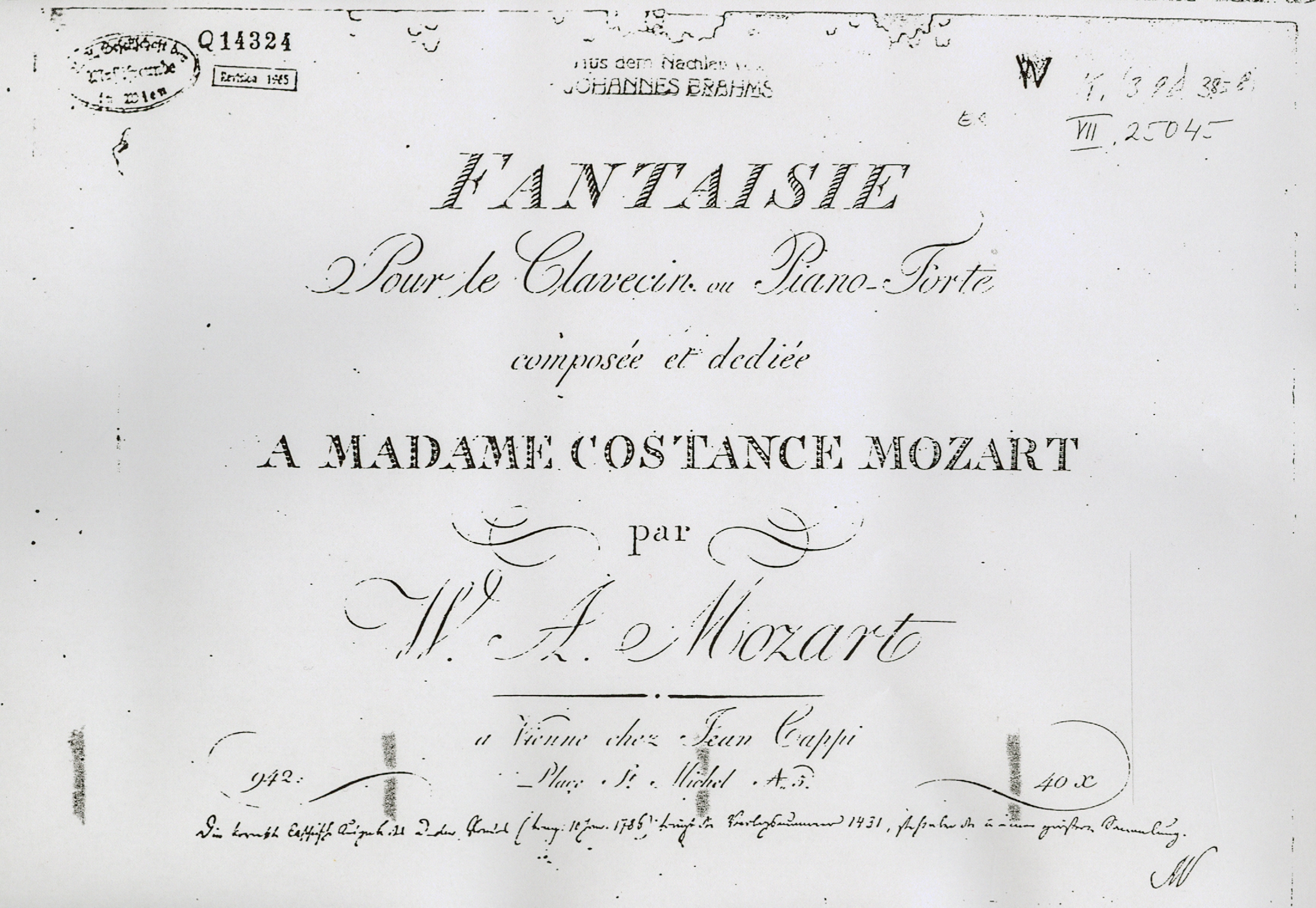 232 years after Mozart wrote down the fragment in 1782, Robert Levin has now finally produced from it a separate version in the original setting, independent of Stadler’s fantasy, truly not a simple task. And we in the publishing house are simply delighted with this new version and really enthusiastic about it. We could well imagine that Mozart himself would be astonished at this completion of his music and pleased were he then able to hear it. The new version as it will appear in a few weeks from Henle was so far first heard publicly when Robert Levin and Noah Bendix-Balgley (concertmaster of the Pittsburgh Symphony Orchestra and future concertmaster of the Berlin Philharmonic) played it in Pittsburgh in a chamber concert on 29 April 2014. To great acclaim, so we hear. It’s not hard to imagine that just because it’s so short the new work will catch on as a much-played encore.