Looking at the topics of the by now more than 70 postings of this blog, most of them deal with questions of musical notation – accidentals, pitch or articulation and dynamics. This is of course not surprising, yet working with musical sources and producing correct and reliable music texts are central in our business.

But a further, hardly less important aspect in preparing an Urtext edition is also the accurate account of the composition’s genesis, which often takes a very winding course and is certainly very significant for evaluating the extant sources. So on this as a rule there are in the forewords (prefaces) of our editions detailed accounts based on both the current state of musicological research and our own insights. Now for once today’s blog posting is to be devoted to the prefaces where so much fascinating and even new information lies waiting…

To serve as a current example can be our soon-to-appear, new edition of Sergei Rachmaninoff’s Vocalise, Op. 34, No.14 (HN 1237), about which so astonishingly much incorrect information is circulating in the literature (and on the internet).

That in 1915 Rachmaninoff composed the vocal/piano piece for the soprano Antonina Nezhdanova is clearly documented by his own statements and his personal dating of the autographs (1st version: 1 April 1915, 2nd version: 21 September 1915). Not infrequently, nevertheless erroneously, “1912” as the date of composition wanders ghostlike through prevalent Western publications (for instance, the English Wikipedia article). Even in the Rachmaninoff biography by Sergei Bertensson and Jay Leyda still much read today (A Lifetime in Music, New York, 1956, reprinted in 2001), the compositional period is cited as “April 1912”, together with “published January 1913”. The erroneous information surely goes back to a mixture of dates for the remaining 13 lieder of Opus 34 actually composed already in 1912; the vocalise, despite the same opus number, was first composed however 3 years later.

The première of the Vocalise took place in Moscow on 25 (not 24) January 1916, and indeed already in Rachmaninoff’s own version for voice and orchestra, not piano. This is very clear, for example, from Nezdanova’s memoirs – here too the Bertensson/Leyda biography errs in stating that Rachmaninoff first got the idea of its orchestration after the première. Serge Koussevitzky, conductor of this concert, is connected incidentally with this work in another manner still hardly known: as ascertained by the Russian musicologist Victor Yuzefovich in his landmark, multi-volume work on Serge Koussevitzky (Moscow, 2004ff.), the Vocalise was already previewed in a December 1915 performance in Moscow. There, Koussevitzky, who was also a legendary double-bass virtuoso, played it in an instrumental arrangement for double bass and orchestra. This most certainly took place with the approval of the composer who was close to Koussevitzky – Rachmaninoff himself may even have given him the idea, for an extant letter reports a social evening at the Koussevitzky home early in September 1915, where later that night Rachmaninoff played for him on the piano his Vocalise then still underway (cf. letter from Anna Medtner to Marietta Schaginjan, Vospominanija o Rachmaninove, ed. Zarui Apetjan, Moscow, 1988, vol. 2, p. 137).

The most surprising find to emerge though in the course of research on the Vocalise concerns the publication year of the first edition. Cited for this in the pertinent Rachmaninoff literature is invariably 1916, which also seems to agree with the copyright notice in the first edition (see the bottom margin of the page): 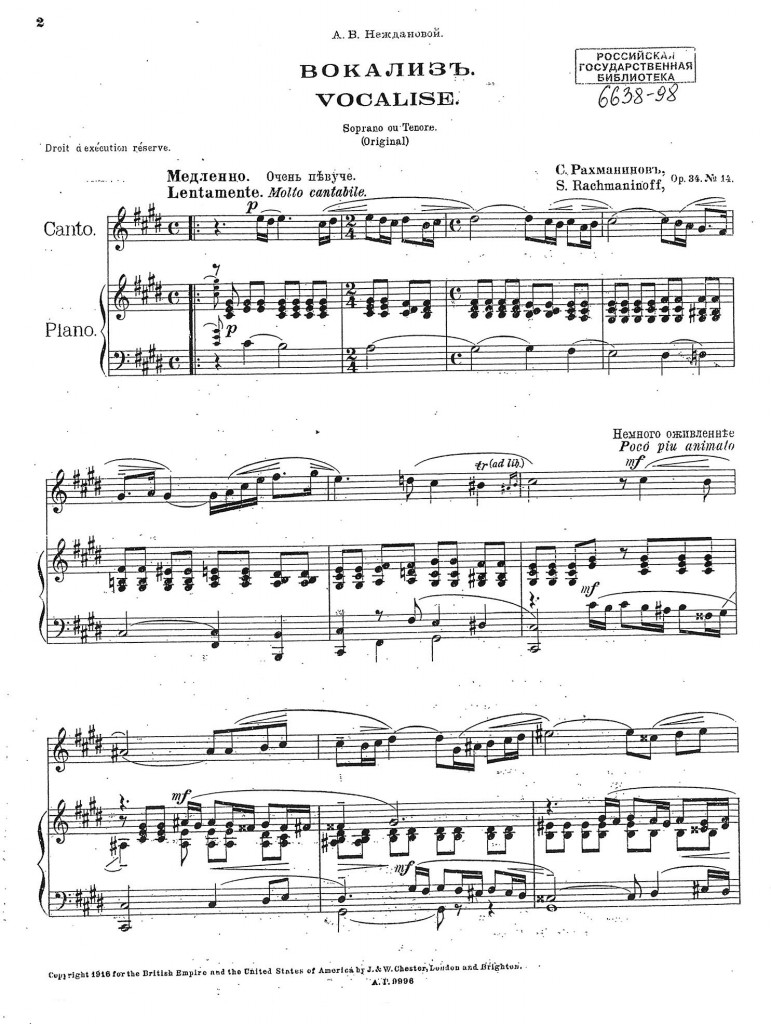 But a rare copy that we came across in the Russian National Library documents that the first-ever issue already appeared in 1915, thus in the same year the work was composed: 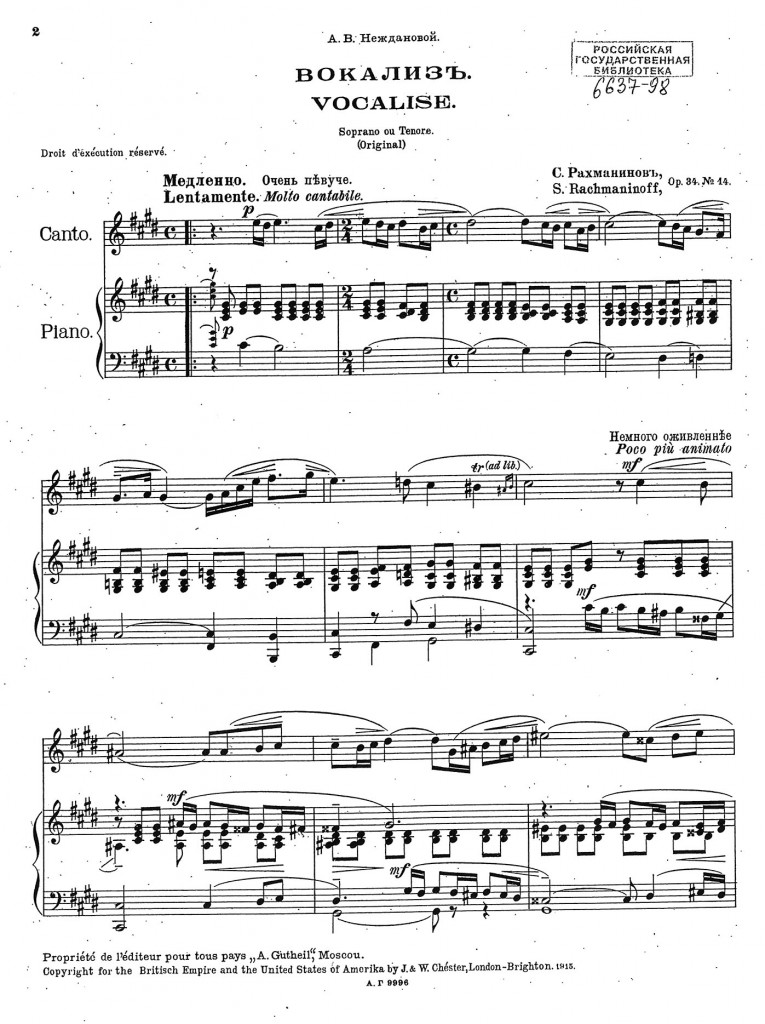 In the copyright notice we can also observe the typos “Britisch”, “Amerika” und “Chéster”, just as they are in Rachmaninoff’s autograph; this was first corrected in the new issue of 1916 using again for other than that the identical printing plates.

This new date is also confirmed by a publishing-house comment on the autograph (the original in Russian): “for engraving 23/IX/15”, i.e., 2 days after the composition was finished. So, the first edition was certainly already published in October or at the beginning of November 1915.

Now, no matter how well we may know any piece, casting a glance at the prefaces of our editions is always worthwhile for the frequently new information about any work’s genesis, première and source dating. Apropos: most of our prefaces and critical reports are available free on our website and can be read, downloaded and printed. Have fun browsing!

7 Responses to »Without words, but with a foreword – what’s new on Sergei Rachmaninoff’s “Vocalise”«