That Henle is a Mozart publisher should not come as news. Since 2011, however, we are doubly so. Our catalogue offers not only Wolfgang Amadeus Mo­zart’s great works for piano and chamber music as well as solo concertos, but since 2011, also Urtext editions of works by Franz Xaver Wolfgang Mo­zart, youngest son of the celebrated WAM.

Franz Xaver Wolfgang Mozart (1791–1844) was only four months old when his father died. High hopes were had of the offspring and everything was done to enable the progeny to follow in his father’s footsteps. He received an excellent mu­si­cal education and soon enough already called himself simply “W. A. Mozart’s son” – a wrong decision, because it is hardly surprising that this legacy became more of a burden than an opportunity.

Today, we try to avoid the fatal historical error of meas­uring the son’s accomplishments by his father’s work.  Henle in this regard was also taking a chance on a come­back when first publishing in 2011/2012 all Franz Xaver Mozart’s piano works in two volumes (HN 958 and 959). We have set standards here and made possible a com­pre­hen­sive and impartial evaluation of this music. The two volumes were edited by Karsten Nottelmann, who, with his catalogue of the works of Franz Xaver Wolfgang Mozart (in: W. A. Mozart Sohn. Der Musiker und das Er­be des Vaters, Kassel, etc., 2009), first put scholarly engagement with this composer on a firm basis (Not­tel­mann maintains, in addition, a separate website on the topic “Mozart, Son”). With the e-minor flute rondo, Karsten Nottelmann published a third Henle Urtext edition in 2013 (HN 1180), so that now all of this Mozart’s important works are to be found in our catalogue.

In the two Henle volumes Franz Xaver Mozart’s piano works are organised by genre and thereafter, chronologically. This makes possible an optimal survey of his extensive work. To be discovered is the familiar (such as the charming “Polonaises mélancoliques” in vol­ume II), the curious (piano variations for three hands in volume I) and the ambitious. Who, for example, would know that Franz Xaver Mozart was amongst those composers to whom Anton Diabelli sent a waltz in 1819 with the request to contribute a variation? Mo­zart’s “Diabelli variation” is dashing, as this recording by Andreas Staier impressively doc­u­ments. Mozart, though, didn’t stop at just one variation. Of course, unlike Beethoven, he did not muster “33 variations”, but did add to it a second variation that Diabelli left un­pub­lished – it is now to be found at Henle!

Son Mozart – surprise, surprise! – also dealt intensively with his father’s works. An ap­peal­ing product of this involvement is the set of variations on the famous Don Giovanni minuet. In concerts, furthermore, he seems to have regularly played his father’s piano con­cer­tos. The extant cadenzas that Franz Xaver tailor-made for them are located in the 2nd volume of our edition and offer a unique insight into the son’s improvisatory in­ter­ac­tion with his father’s material. These and similar discoveries can be made in our complete edition, amongst them several first editions of works that have up to now never been in print! 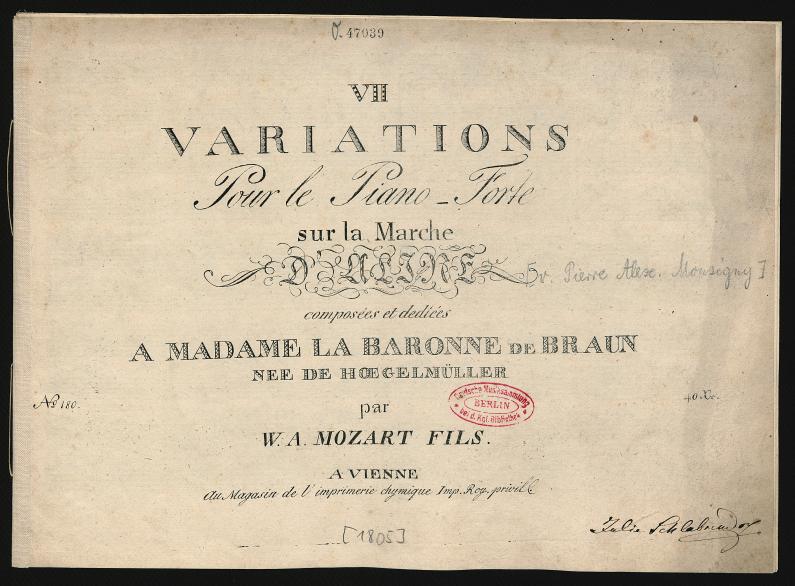 The so-called e-minor flute rondo – in truth, the 1st movement of a never-completed sonata for flute and piano – belongs to the core repertoire of all flutists and attractively rounds out the picture the Henle publishers presents of Franz Xaver Wolfgang Mozart, the musician.

Our editions are based on first editions as well as also on extant autographs in relatively great numbers. The sources in the holdings at the Mozarteum Salzburg can be ex­em­pla­ri­ly examined on its website. Found there, in addition, is the digitilisation, complete with trans­crip­tion, of the entries in one of the composer’s family albums – an offer inviting us to rummage. 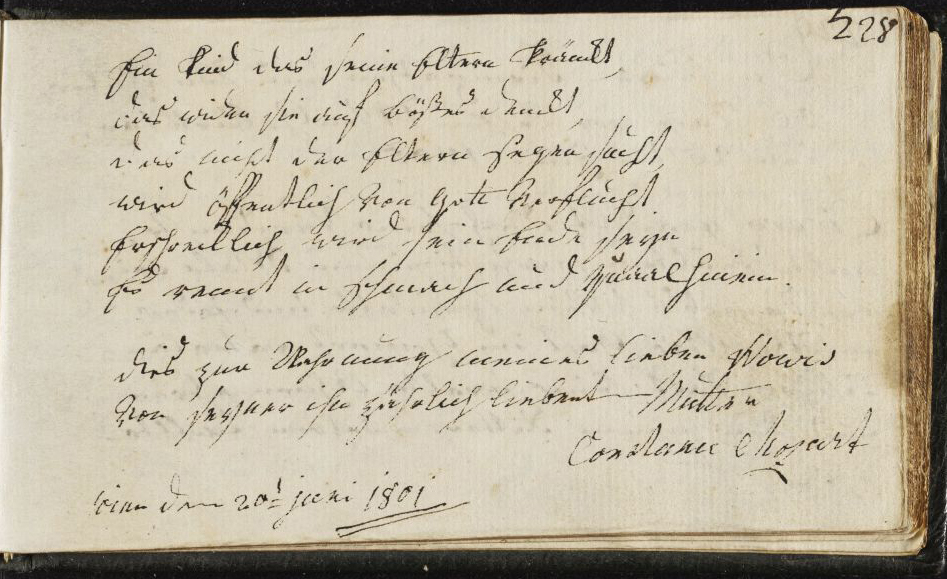 On the occasion of the 170th anniversary of Franz Xaver Wolfgang Mozart’s death, 29 July 2014, the WDR [West German Broadcasting Corporation] broadcasted a “time signal” (in German language), assisted by our editor Karsten Nottelmann:

2 Responses to »Franz Xaver comes to Henle: On the 170th anniversary of the death of Franz Xaver Wolfgang Mozart (29 July 2014)«