It was not without good reason that the label ‘outsider’ stuck to Satie. As of his earliest compositions he was in search of alternatives to the tonal harmony that was still the unquestioned convention when he began his training at the Paris Conservatoire (1879–87). This search runs like a red thread through all of his works, and was certainly absolutely independent of the stylistic orientation of individual works, reaching indeed, as we know, from echoes of the medieval and exotic to the then popular cabaret music.

An important aid for concrete intervallic configuration were his own drafted harmonic formulas and tables that survived in his extensive estate and were described in detail by Robert Orledge in his treatise Satie the Composer (1990).

The plans and formulas bequeathed in the notebooks for the ‘Nocturnes’ (1919) point to a system developed and modified during composition for rigorously guiding the interplay of melody (right hand) and accompaniment (left hand) within the explicit tonal context – in D major for Nos. 1 to 3, in A major/F-sharp minor for No. 4; planned in F major for Nos. 5–7.

Before first writing down the ‘Nocturne’ No. 2, Satie made a note of the following plan in the relevant notebook: 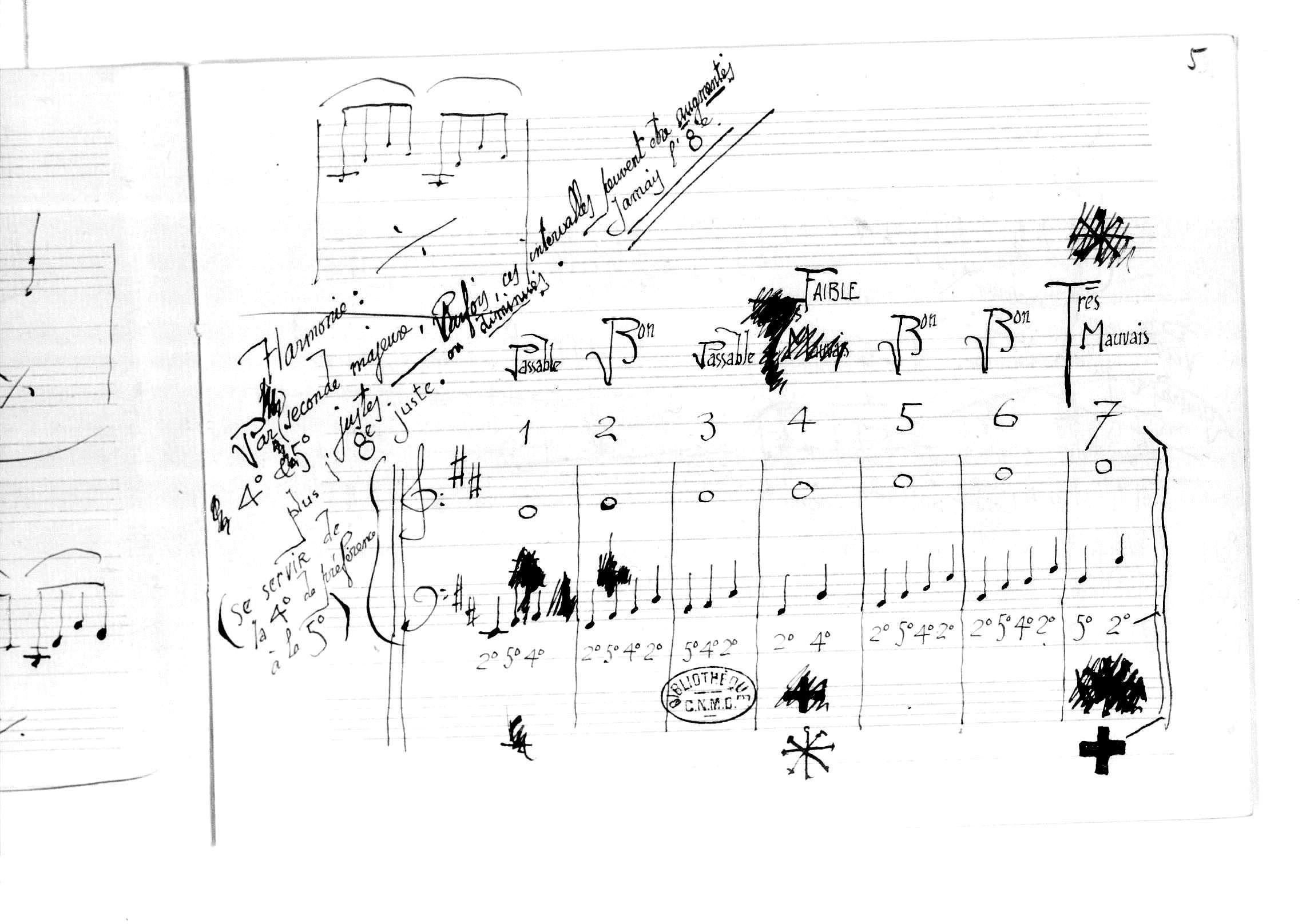 To be found above the diagram is the note: ‘Harmony: By major seconds, perfect fourths and fifths; sometimes these intervals can be augmented or diminished; never use the octave, especially the perfect octave.’ Below, right beside the plan: ‘Use the fourth in preference to the fifth.’

With that, the guidelines are already formulated; rated respectively in the plan itself are the intervallic options by seconds (sevenths), fifths and fourths on the various degrees of the D-major scale: from ‘bon’ (good, four options) through ‘passable’ (tolerably, three options) to ‘faible’ (weak) and ‘très mauvais’ (very bad, two options each).

We could suppose that such a rationalisation of the harmony would have had to make composing easier for Satie – but in view of the numerous abandoned attempts, fragments and corrections in the notebooks, just the opposite seems to have been the case. Shown in practice is that he frequently had to break his self-established rules and introduce chords with unisons/octaves or sixths/thirds in the interests of balance, voice leading, etc.

Editing for editors of his music has also not been made any simpler by such tables and systems. For especially the possibility of also using intervals in the diminished and augmented form leads to dubious passages in the music text, as unfortunately Satie more often than not forgot accidentals.

Some of the accidentals can be added without problem, relatively speaking, as shown in the following example from the 2nd Nocturne (measures 15–16, see accidentals in parentheses) in our forthcoming new edition (HN 1205).

With other passages, on the other hand, which interval is intended can be decided only with difficulty or even not at all. One of these places is briefly presented here:

It has to do with the final eighth note before the ‘Large’ in measure 14, according to the key signature we have above on the basis of the bass octave D/d the chord of e1/b flat1/e2. This is very unusual in the context of the harmony of the whole passage. Whilst the already previously resolved octave is indisputably e1/e2 (Satie consistently avoided minor seconds, see the bass), the b flat1 of the lower voice appears disturbing, for in the ‘Plus lent’ section we otherwise have only perfect fourths. Furthermore, the combination e1/b flat1/e2 despite the ‘wrong’ bass (d instead of c) results in a kind of dominant leading tone that Satie actually wanted to eliminate from his composing. Is it then simply a printing error? Evidently not, because Satie also places the natural sign in the aforementioned autograph manuscript only three eighth notes later (for the sound a1/b1, in order to avoid the minor second). 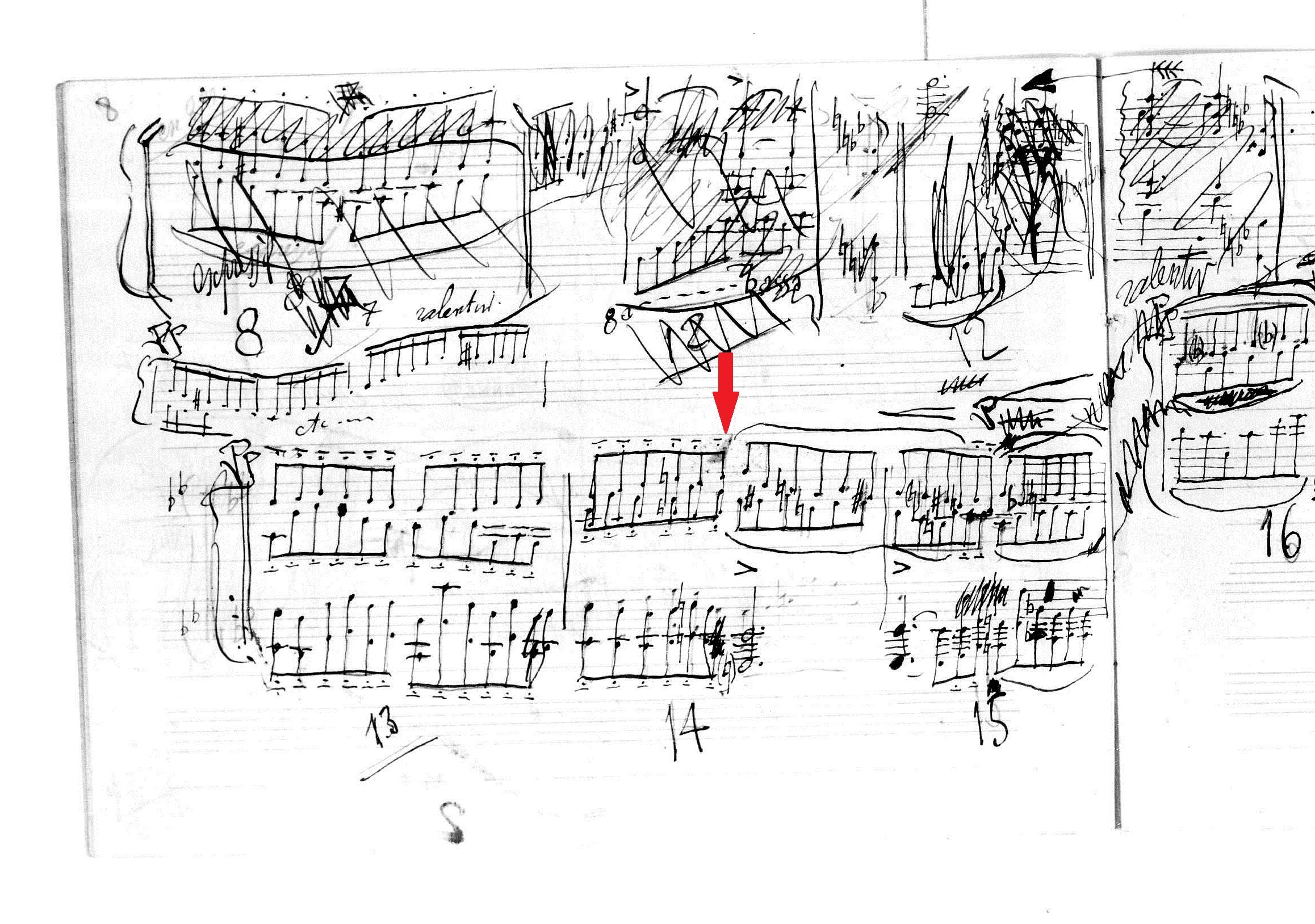 From Satie’s system the b flat1 is surely wrong, but then again we cannot rule out that here, however, the composer may deliberately have contravened in order to also accentuate the passage’s dynamic climax harmonically by a sort of dominant leading tone (e2 does indeed actually resolve to f2). Ultimately, this spot cannot be clarified for certain, so that the editor of our new edition, the Satie expert Ulrich Krämer, decided to comment with a footnote discussing the possibility of a forgotten ♮ (thus b1 instead of b flat1).

To anyone who feels like hearing the ‘Nocturnes’ we recommend listening to the following recording (Pascal Rogé, Nocturnes 1–5, 1988)