On 1 November 2014 G. Henle Verlag is publishing a massive two-volume book of just under 2,000 pages – a rare and therefore special event for our house that issues almost exclusively music editions. This is a new catalogue of the works of Ludwig van Beethoven, superseding its predecessor of 1955 known as the ‘Kinsky-Halm’, anyhow, already also of around a hefty 900 pages. Catalogues of composers’ works from the G. Henle house – besides the one for Beethoven we have published them for Brahms, Schumann and Reger, and in a few years one for Bartók will also be coming along – are to be servants of many masters. Musicians turn to them when they want to know something, for example, about the genesis of compositions. By the same token, a journalist also reads them in order to find out, say, about the dedicatee of a work. Musicologists keep track of surviving musical sources – manuscripts and prints –, which particularly interest editors of scholarly music editions. With the help of works’ catalogues antiquarian booksellers regularly establish the significance and hence the value of a print that they want to offer for sale or at auction; and librarians ultimately want to know, amongst other things, whether an edition or a manuscript out of a catalogued estate is so valuable that it belongs in the safe and not on the shelf in the stacks. 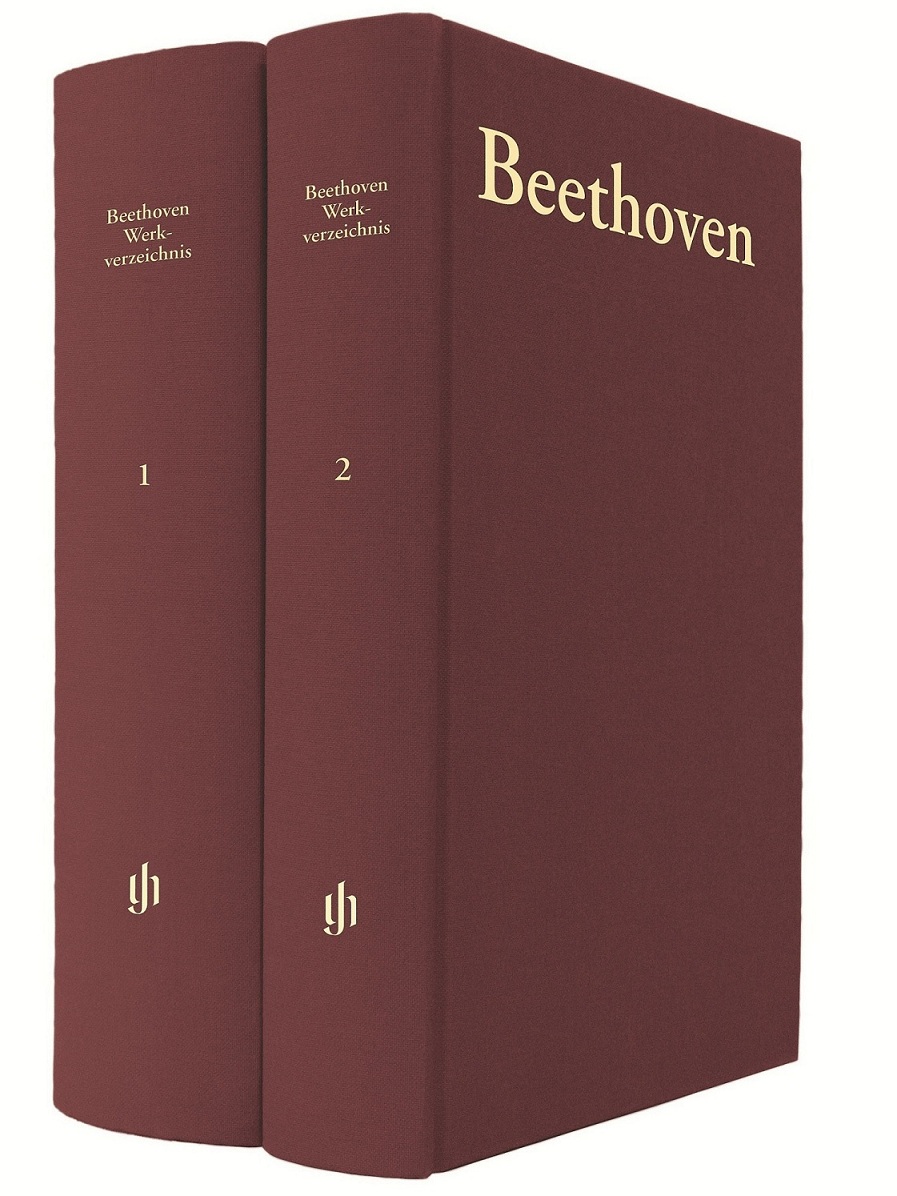 The new Catalogue of Works of Luwig van Beethoven

Time after time during the many years of preparing the new Beethoven catalogue, the editors (Kurt Dorfmüller, Norbert Gertsch and Julia Ronge) of this fundamental work were asked, whether for a composer ‘so well-investigated’ after 1955 it was even worth the effort then to put together a new works’ catalogue. Hasn’t everything about Beethoven already been said? Well, I’d like to show in the following three examples that it was worthwhile:

(1) You know the two Op. 70 piano trios, especially the wonderful ‘Geistertrio’ or ‘Ghost’ trio, Op. 70 No. 1, which owes its name to the mysterious middle movement, ‘Largo assai e espressivo’? (Apropos of nothing, if you had not known the opus number of the ‘Geistertrio’ and had looked for this work in the old works’ catalogue of 1955, finding it would have been quite a lot of trouble. For nowhere there is the trio’s popular title mentioned, let alone explained. In the new catalogue you can look up the popular title in the index and get lucky. And the explanation of the title is then to be found in the entry for Op. 70. But that’s really only incidentally.)
If you’re interested in the extant music manuscript sources for the ‘Geistertrio’, you’d find in the 1955 Kinsky-Halm catalogue a couple of mundane comments: The owner of Beethoven’s own manuscript could not be ascertained back then. This autograph had been sold in New York in 1950 and was no longer available for research. The location of another important source, a copy of the piano part proofread by the composer, still traceable in the 19th century, could likewise no longer be mentioned: it was unknown. 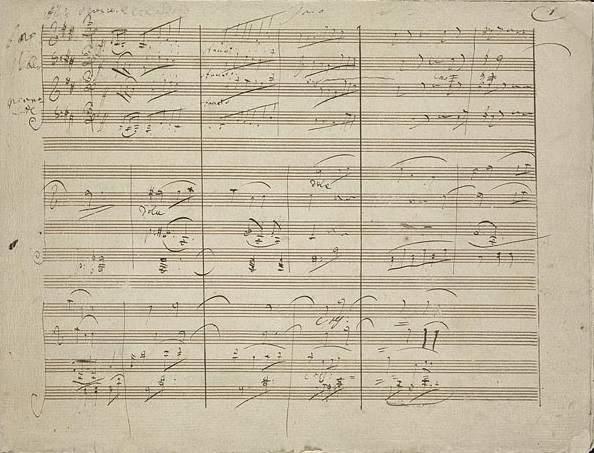 The legend of the above illustration already gives it away: The location of the autograph is known today and the digitalised source can even be completely called up on the Internet. The manuscript had been sold in 1950 to Mary Flagler Cary and acquired in 1968 by the Morgan Library in New York. The proofread copy of the piano part has also resurfaced. It is located today in the Beethoven-Haus in Bonn and can also be fully viewed online. The Beethoven-Haus acquired it in 1991 after it had found its way via Pressburg, Budapest and Munich to the antiquarian bookseller Hans Schneider in Tutzing. All of this is, of course, already known today to the specialists who had begun to search for the sources; similarly, the fact that a proofread copy of all the parts for the trio, Op. 70 No. 2, is also to be found in the archives of the Gesellschaft der Musikfreunde in Vienna was not at all known to the 20th-century works’ catalogue in contrast to that of 2014. Indeed, the reader of the latter need not now search any further for information.

(2) In addition to catching up with the existence of manuscript sources, the new works’ catalogue also addresses itself to reappraising the early prints of Beethoven’s compositions. In 1955 you could assume that the famous 5th piano concerto in E-flat major, Op. 73, first appeared in print in February 1811 from Breitkopf & Härtel in Leipzig. For collectors, but also for musicians and editors faithful to the sources, this edition (in parts) thus has a very great value, much greater than a popular reprint, like, for instance, the edition classified as such in the old ‘Kinsky-Halm’ that was worth only a line in the catalogue: ‘Reprint: London, Clementi & Co. (1811?, as Op. 64).’
Today we know, and the 2014 works’ catalogue presents the fact, that this ‘reprint’ was the actual ‘first edition’ of the piano concerto. It appeared, verifiably, already in November 1810, so four months before the Breitkopf edition, and it is an authorised print initiated by Beethoven himself – an original edition. 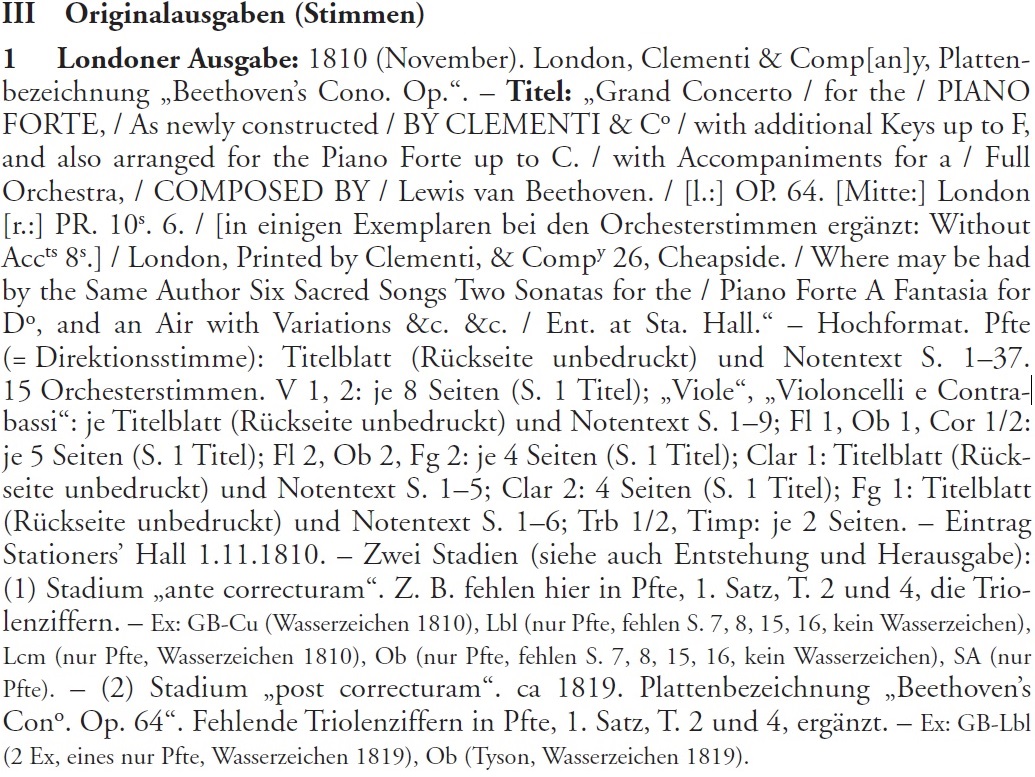 Excerpt from the new Catalogue of Works - original edition of Op. 73

(3) Whereas the new thematic catalogue updates above all the current state of Beethoven research, something new beyond that could also still be made known. Under the work number WoO 120, the 1955 catalogue lists the lied of an unknown poet, ‘Man strebt, die Flamme zu verhehlen’, which Beethoven, according to the inscription on the extant autograph, had composed for the actress and playwright Johanna Franul von Weißenthurn (1776–1847). A somewhat more intensive research into Weißenthurn’s oeuvre now brought to light the fact that the dedicatee of the autograph is also the poetess of the lied text. In her comedy ‘Das Nachspiel’ the protagonist Leonore (!) sings, accompanying herself at the piano, the lied that Beethoven composed presumably for the première of the play at the Burgtheater in Vienna in 1800. So, not only was the question of the text model cleared up, but the previously conjectured time of origin could also be corrected from ‘ca. 1795’ to ‘probably 1800’ in the new works’ catalogue. 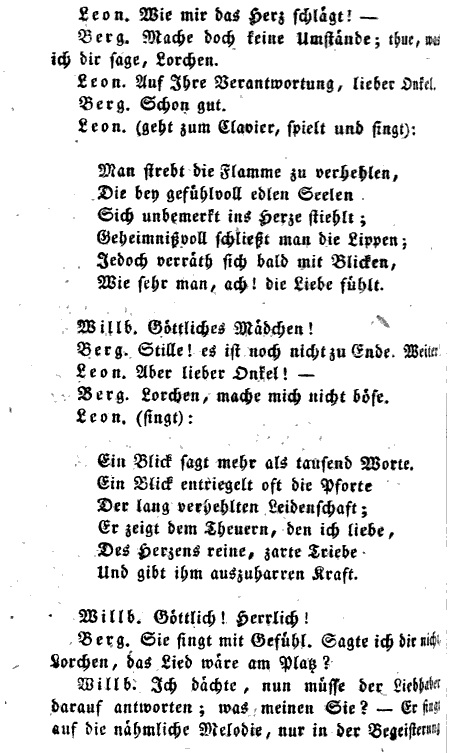 We hope that these few examples can already show why it was worthwhile after nearly 60 years to compile a new catalogue of the works of Beethoven. Would you like to know more? Then, please take a look for yourself at the numerous excerpts that we have provided for you on our website.