Posted on November 10, 2014 by Annette Oppermann 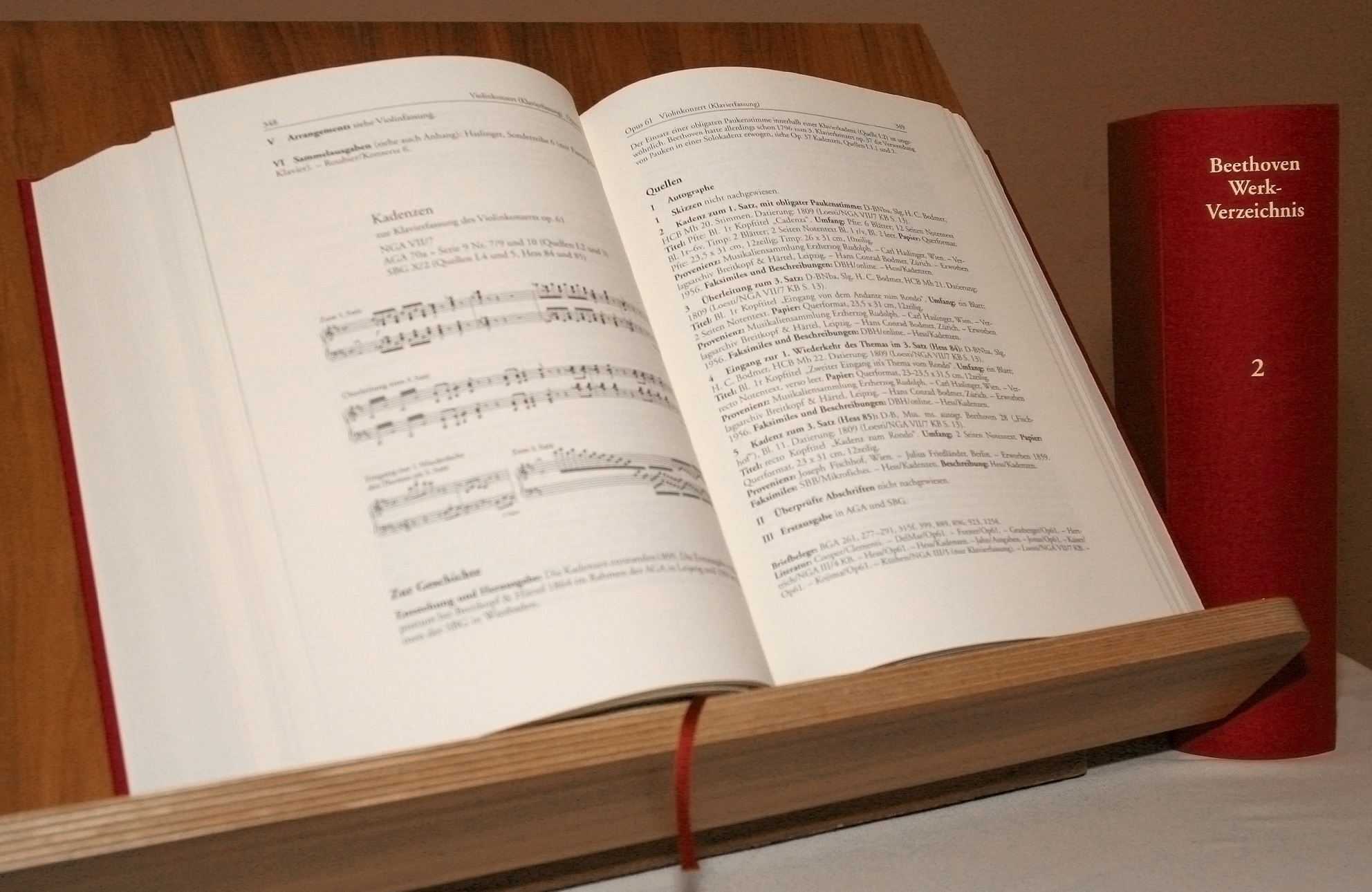 The new Catalogue of Works of Ludwig van Beethoven

Come on now, fess up! Haven’t you sometimes thumbed through the last chapter of a crime thriller or the dramatic denouement of a love story so that you’d know, already in advance, how it ends – even if, of course, this goes totally against the author’s wishes! What is taboo in belles lettres, though, is absolutely permissible in scholarly works. Yes, we might just as well tell all the readers of our brand new Catalogue of Works of Beethoven [HN 2207]: “Go ahead, take a look at the end!”  Because after the individual entries for all the works with and without opus number, an entire universe of information about these works still opens up on more than 300 pages, starting with p. 573 in vol. 2. 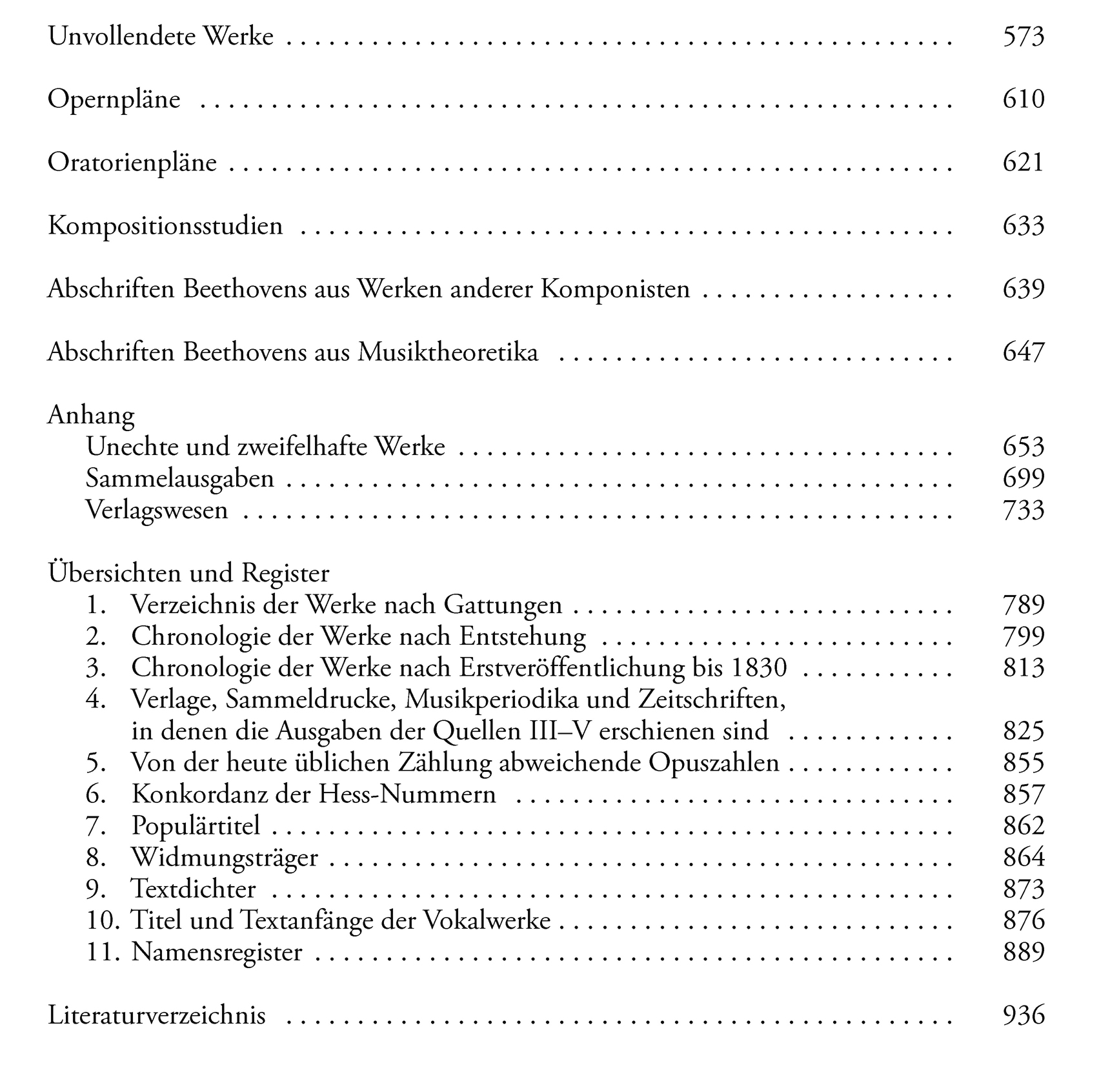 So, described for a start are nearly two dozen “new” works that, though indeed fragmentary, are still accessible in musical drafts and, as Unv 1 to 23, now crucially enrich our view of Beethoven. Or, would you have known that located here in addition to several more or less familiar instrumental movements and the much-discussed “10th” symphony is also Lamentationes Jeremiae (Unv 20) from the Bonn period? That Beethoven also once sketched a Heidenröslein (Unv 23)  and had even set his sights in 1808 on a Macbeth? In this regard, incidentally, the new catalogue goes well beyond its predecessor catalogue by Georg Kinsky and Hans Halm, where, by definition, only completed works are treated. 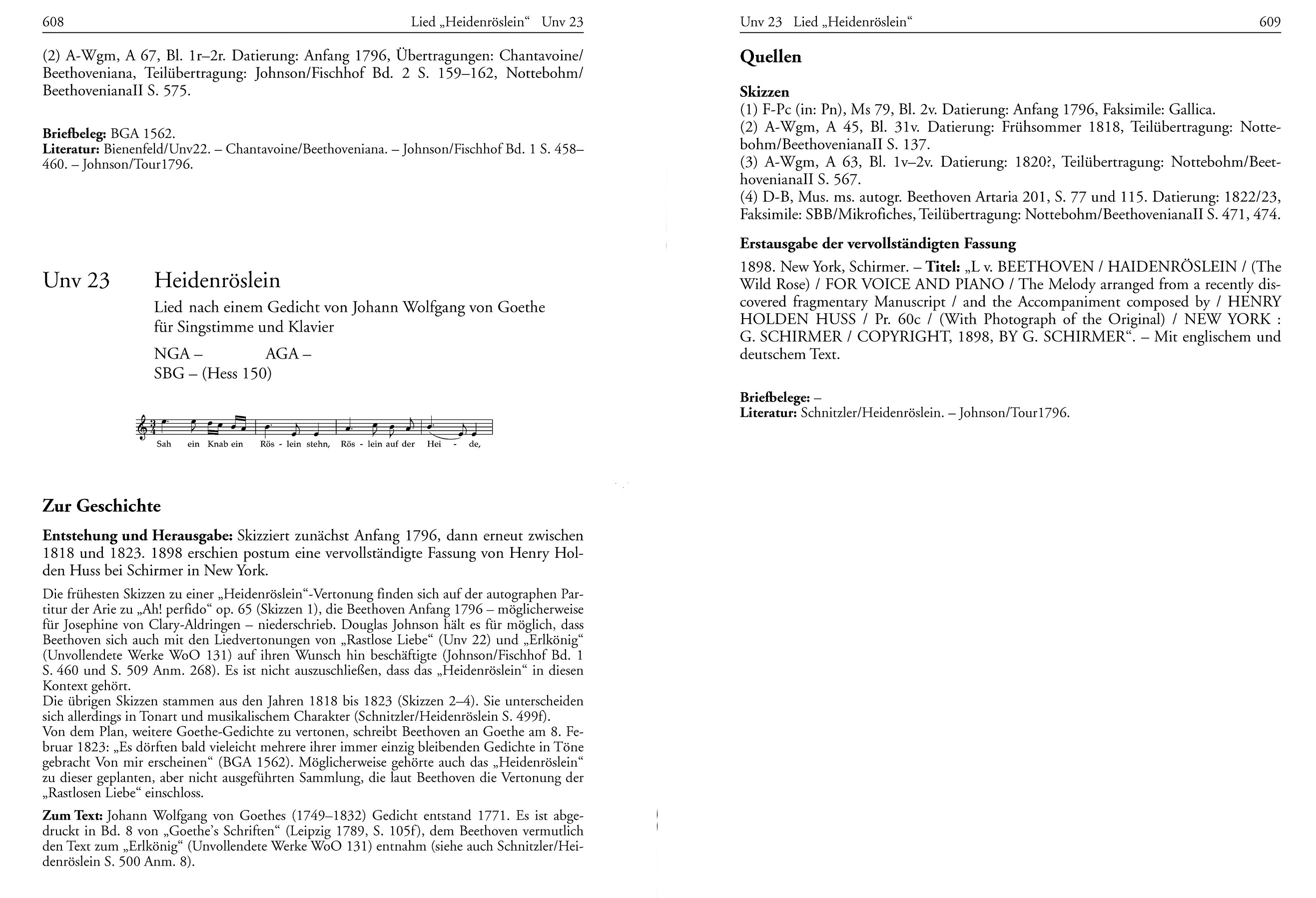 The Catalogue of Works of Beethoven - Article to Unv 23

Since, after all, two autograph notations for Macbeth have survived, it has its own entry as Unv 16. But that for Beethoven’s musical favour in ca. 1808 the Shakespeare hero competed with Ariosto’s Orlando furioso and Goethe’s Faust can be inferred only from letters and secondary sources. Julia Ronge’s section on the opera and oratorio plans tells us just how many such unrealised stage projects Beethoven pursued throughout his life. “What might have been, if only…”, we sigh after every paragraph of this highly fascinating account (see the excerpt on our website).

Conversely, Beethoven, the “student”, also takes shape in the new catalogue through the listing of autographs from his composition lessons, together with his manuscript copies from theoretical and practical works of music. Beethoven’s familiarity with and admiration for Bach, Handel, Mozart and Haydn is well-known; but that he did not merely own a print of Handel’s Messiah, but also copied excerpts of Mozart’s arrangement of this oratorio, documents a very concrete preoccupation with the work, the genre and the then approach to earlier music. 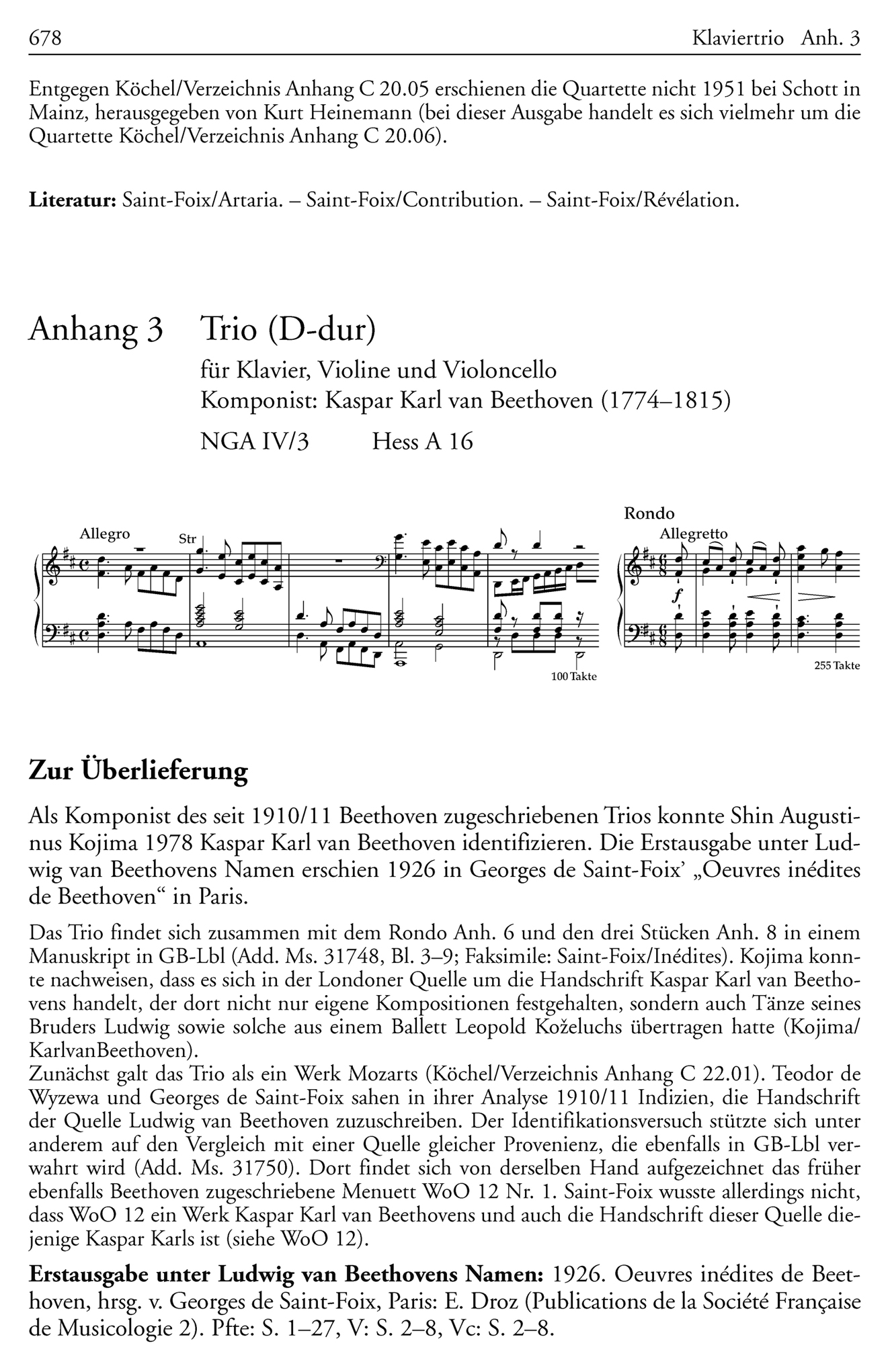 The Catalogue of Works of Beethoven - Article to D major Trio Anh. 3 (excerpt)

If these accounts furnish absolutely essential information on the creative work of a great master, the subsequent appendix focuses in another direction, that is, on its economic usage. The kind of purchasing power that the name Beethoven possessed is shown by, if nothing else, the range of works published under his name that have meanwhile been exposed as spurious or, at any rate, dubious. Although, of course, this does not properly belong in a Beethoven catalogue, the new works’ catalogue supplies a current appraisal for at least the works already recorded in the Kinsky-Halm catalogue –  and can unmask many a later misattribution as well (whereas it sometimes stays in the family as for example the D major Trio Anh. 3, which is nowadays accredited to Beethoven’s brother Kaspar Karl).

Providing further documentation of the Beethoven editions’ sales potential is Kurt Dorfmüller’s survey of the numerous omnibus editions, where primarily Beethoven’s piano and chamber works were published, but where first attempts were also made to present a complete edition. These publications were, of course, also mentioned in the respective work entries. In the appendix, however, the various collections are characterised in scope and content, and relevant dating details as well as also competing, related editions are clearly presented contextually in both tables and discursive text.

Last but not least, this also applies to the final and most extensive section in the appendix, devoted to contemporaneous publishing: Here Kurt Dorfmüller, past master of Beethoven publication research, draws on his unlimited resources and presents historical summaries of the large as well as the smallest publishing houses of the Beethoven period, compiles information collected for decades on publishers’ and works’ catalogues, on printing technology, title-page variants and information on price and currency development (right up to the fourfold subdivision of Kreuzer signs used by Schott!) – from which, entirely incidentally, he furnishes the criteria for 19th-century music dating that so many readers will gratefully use for their own studies. 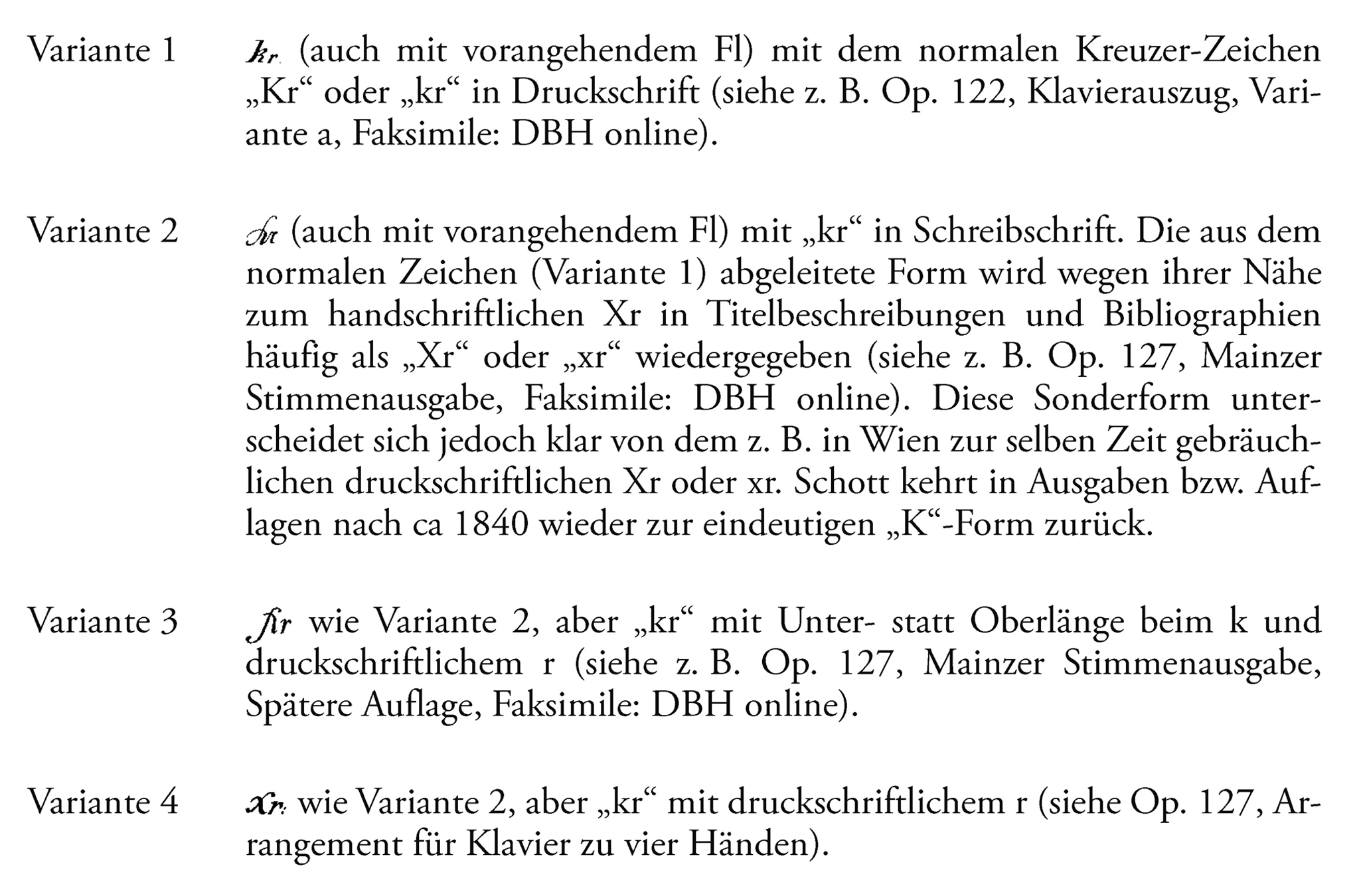 Users’ desiderata have also led us in the conception of the altogether eleven indices and synopses concluding and indexing the new works’ catalogue. In scope and aspiration we are offering here not only entirely “new” indices well exceeding the predecessor catalogue, such as that of the popular titles or the extensive Hess concordance, but also fundamentally expanded indices such as that for publishers: The old works’ catalogue lists here on no more than two pages only the publishers of the contemporaneous original editions, the new catalogue offers on 30 pages an overview of all the publishing houses and publications mentioned in the entries. The subdivision within the individual entries permits simultaneously a quick grasp of who published primary original editions (such as, for example, the Wiener Kunst- und Industrie-Comptoir) and who banked on reprints and arrangements for further exploitation (such as the publishing house of the same name in Berlin). 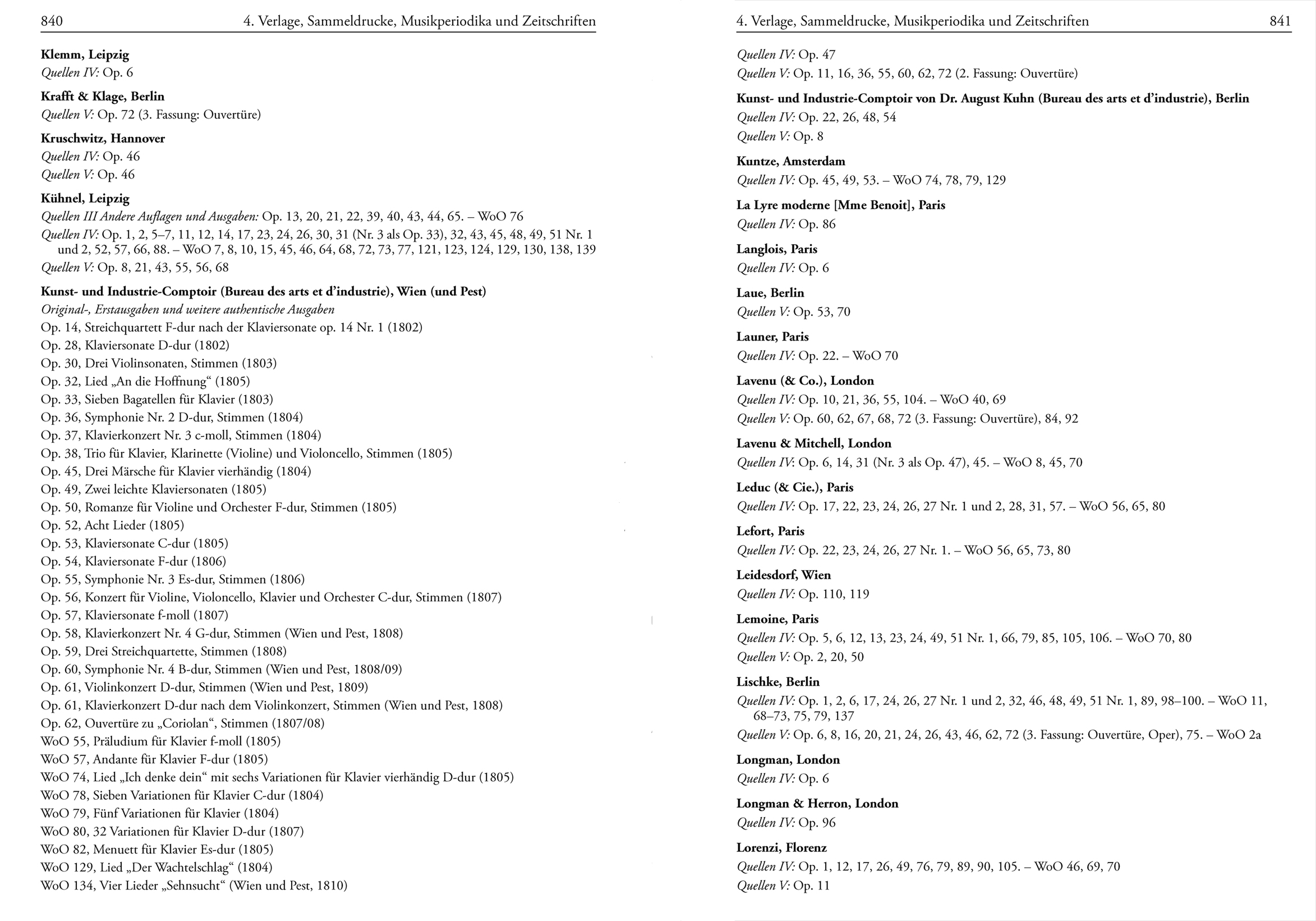 You’ll see:  there are plenty of reasons for reading from back to front once in a while.  Have fun with it!