We most warmly thank you today for your continuing interest in the Henle Blog. We also look forward to your visits in the coming year and promise interesting postings on musical questions concerning music texts.
Today we would like to encourage you- during the upcoming holidays – to take a closer look at the different textual and musical versions of one or the other advent- or Christmas carol. 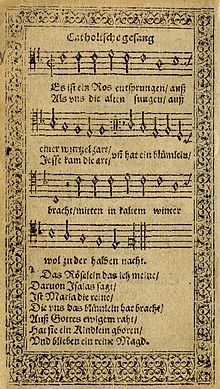 The Christmas carol with probably the most puzzling text is the well known „Es ist ein Ros entsprungen“ (Lo, How a Rose E’er Blooming). Singing it for the first time one usually stumbles over the verses which go back to a verse from the bible „There shall come forth a shoot from the stump of Jesse, and a branch from his roots shall bear fruit.“ (Jes 11,1) The author of the carol-text is presumably the Carthusian monk brother Conradus from Treves, who wrote the first two verses in 1587. A few years later, the carol was printed with a melody in the catholic hymnal of Speyer (Cologne, 1599), meanwhile comprising over 20 verses instead of initially two verses! The text not only narrates the Christmas story, but also portrays Mary and describes the lineage of Christ (Isaia being Davids father). Only after the adaptation by Michael Praetorius at the beginning of the 17th century, did this carol gain popularity in protestant regions. Praetorius created a four-part structure and changed the text as well: Christ instead of Mary is now the main focus of the verse. The different textual adaptations which have occurred since then reflect the respective comprehension the author has of the figure Mary and her role. Although this carol was very popular, it entered modern Hymnals rather late.
Praetorius’ choral arrangement is a standard in many a Christmas concert today. A recording of the King’s Singers presents his version of the carol in a very original interpretation.

This version is the basis for many further arrangements, like for example the one by the Swedish composer Jan Sandström (*1954). In Sandström’s version of „Det är en ros utsprungen“ two choirs sing: the first one presents the four-part structure by Praetorius, the second Choir however has eight parts and is meant to be hummed. Because of the slow tempo and the gradual buildup of the chords, a wavering sound develops, like a meditation on the choral. Sandström’s composition was printed in 1995 for the first time, by the Sveriges Körförbund. You can experience this other perspective on the Christmas carol in a recording of the Choir of the Bayrischer Rundfunk (Bavarian broadcasting).
http://www.youtube.com/watch?v=pVnMlpO_r7A

We would like to close with the song as performed by the WDR Choir in quite an unusual place. We wish you all a Merry Christmas and a Happy New Year 2015!

This entry was posted in arrangement, General and tagged Praetorius, Sandström. Bookmark the permalink.