Posted on February 2, 2015 by Norbert Gertsch

Ludwig van Beethoven is one of those composers among the great masters who left behind a very large quantity of sketch material. We can hardly tell how many leaves are extant, because not all of them are publicly accessible. My personal estimate would be about 5000 leaves. This material contains a magnificent stock of sketches for known works, but also much that is unknown. When Beethoven’s estate was put up for auction in Vienna on 5 May 1827, a large portion of the auction was devoted to manuscripts that were “autograph jottings and notebooks” or “working sketches, fragments and partly-unfinished works, written in his own hand and not yet printed”. These “jottings and notebooks” come to about 50 books and notebooks of sketch leaves that Beethoven bound together. Some of them were very extensive; especially thick is the “Mendelssohn 15” book of 173 leaves, almost exclusively of sketches for Beethoven’s single opera, “Leonore” or “Fidelio”.

In 1798 the composer went from sketching his works on loose leaves to using desk and pocket sketchbooks that he himself bound. These books and notebooks were to accompany him throughout his life; he kept them until he died, even when the compositions drafted there had long since seen the light of day. Often these volumes also included not-yet-realised ideas and jottings that perhaps could still fulfil a purpose later on. For the same reason, he also kept the numerous loose leaves that had accumulated before 1798.

At the estate auction, publishing houses, led by Viennese publisher Domenico Artaria, also rushed to this loose material, hoping perhaps to find there unknown pearls that could still be lucratively published. Yet the pickings were slim. Let’s take a look at probably the most famous bundle of loose leaves, the so-called “Kafka Miscellany” located today in The British Library in London. This “general store” of manuscripts, including no less than 124 leaves, comes from the Artaria publishing-house stock and contains only a very few complete works. 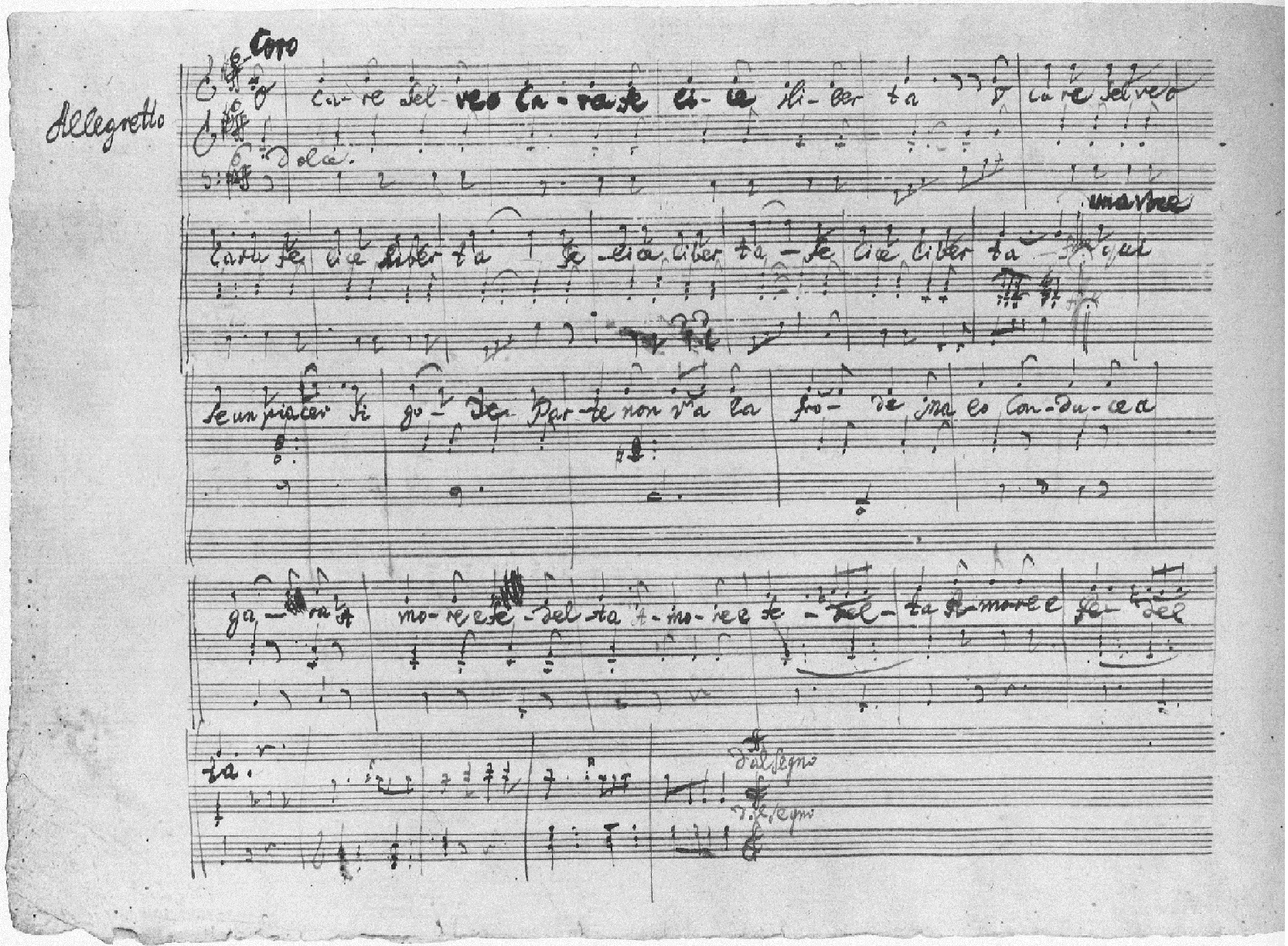 An interesting group of drafts does, however, concern the Beethoven works left unfinished. Here, we cannot always tell whether these compositions were, in fact, never really finished, or whether, as of now, a portion of these [once] complete drafts have simply gotten lost.

A by now quite famous example of something that did not pass down to us completed is perhaps, in this case, really an unfinished work, the “Duo with two obbligato eye glasses” for viola and cello WoO 32. It consists of two movements, a fast sonata movement and a minuet, jotted down by Beethoven at different locations in the “Kafka bundle”. Although the suspicion that both pieces belong together is confirmed by the existing sketch material, as well as by the unusual scoring, it is still unclear how to interpret another piece following the 1st movement, for which Beethoven notated only 23 measures. Was this piece a substitute for the minuet? Or was it an additional piece, perhaps to create a sonata out of the three movements? Did Beethoven actually want to make a “Duo” by combining the two extant completed pieces? 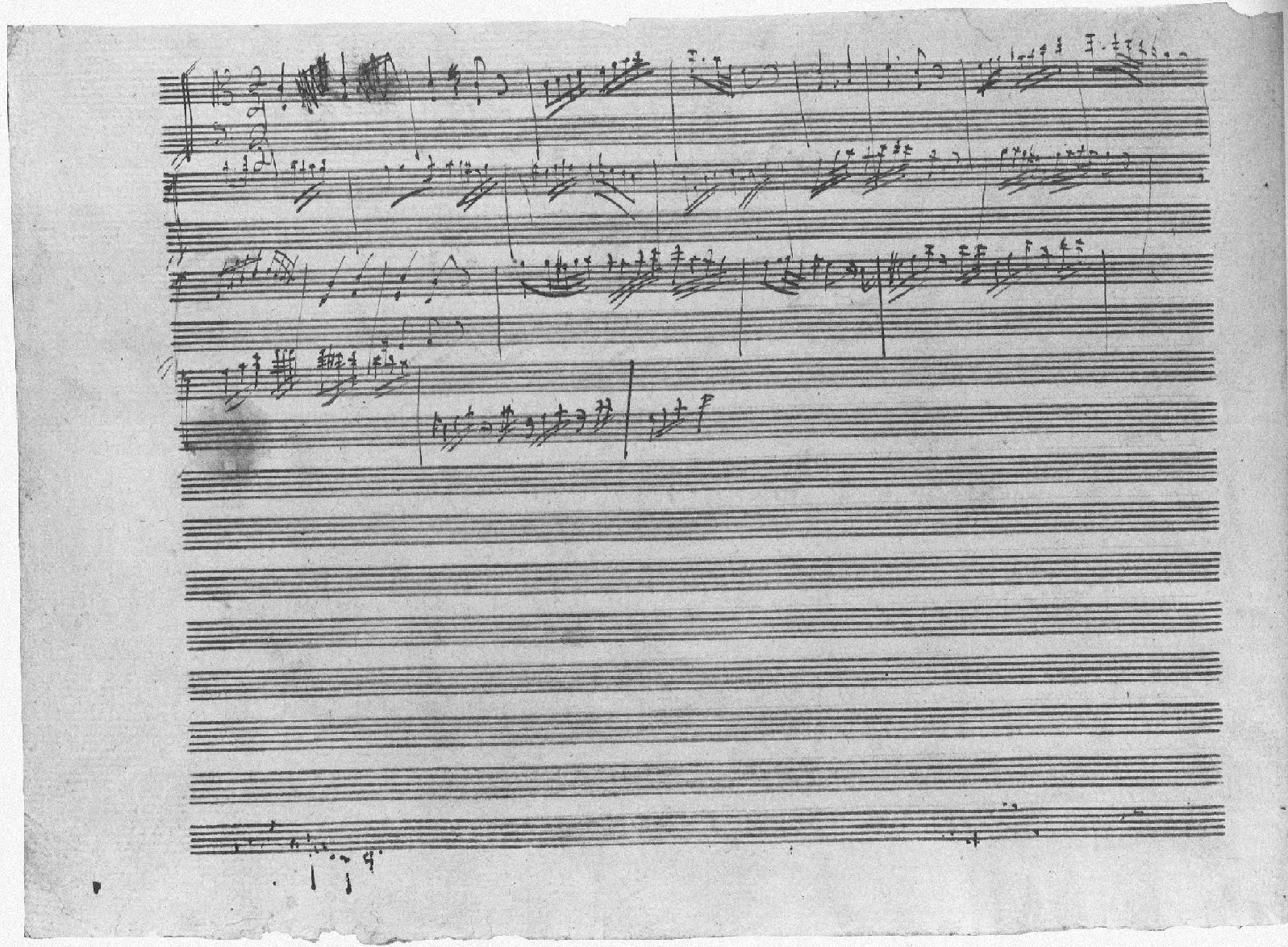 While the duo does exist in a version that can be performed, since both movements were indeed completely notated (although without any dynamics at all, and only with sporadic articulation), other compositions in the sketch bundle are lacking crucial sections. This applies to the Romance cantabile for flute, bassoon, piano and orchestra WoO 207, just as unusual in its scoring, as well as to the Duo for violin and cello Unv 8 (numbering from the new Beethoven works’ catalogue). Of the romance, only a 57-measure section in the minor key is extant, while the following major-key section breaks off after four measures. Evidence suggests that this piece once existed in full, but also that it was the middle movement of a larger complete work. So, as it is today, the romance can, in any event, no longer be performed, not even as a single movement concert piece, unless someone completes it. 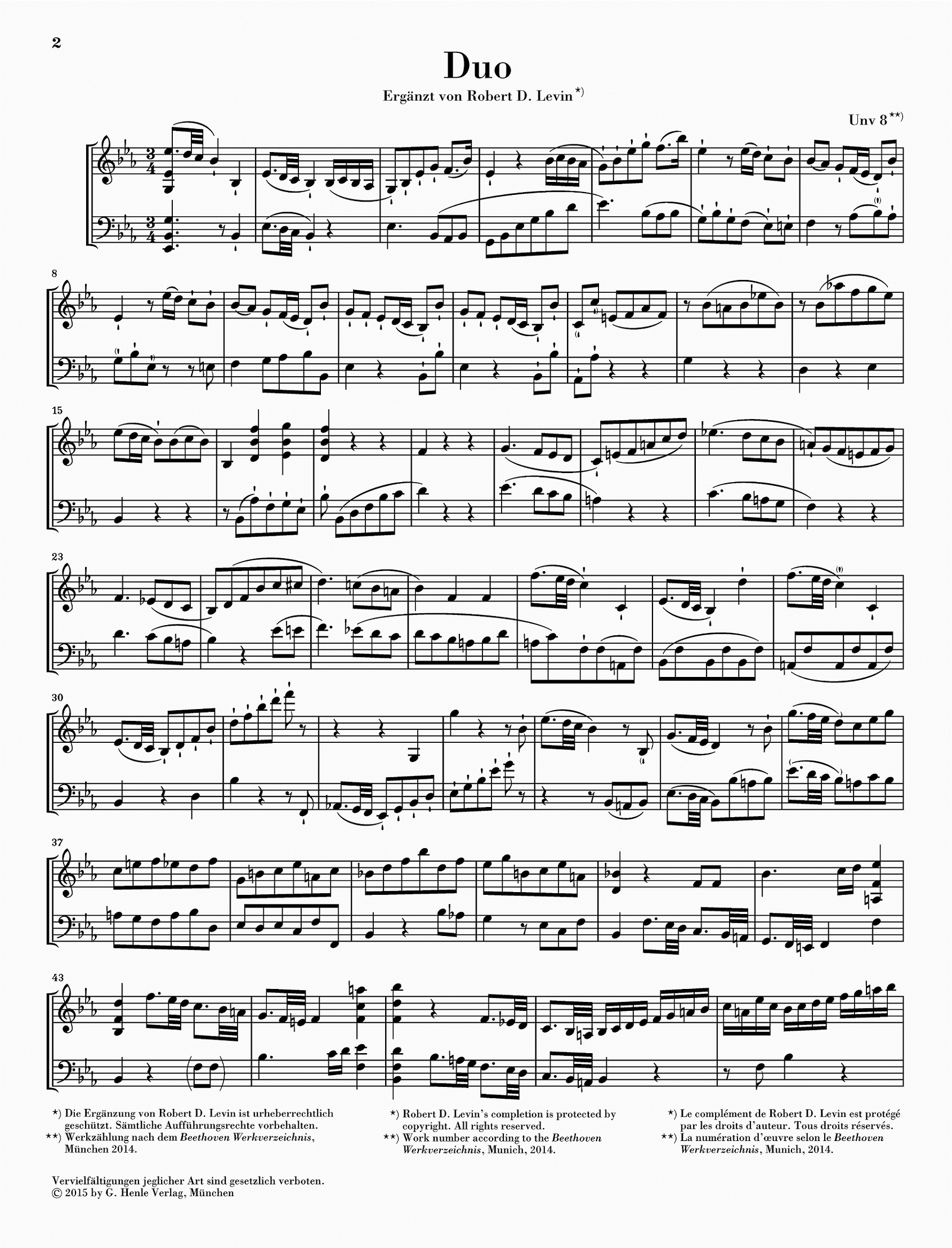 A similar fate befell the Duo for violin and violoncello Unv 8. Surviving is merely a sonata-movement exposition that breaks off at the end of a page without a sequel continuing anywhere in the bundle or anywhere else. Unlike the romance, we cannot be certain here that there ever was a complete movement. All the more delightful it is then that we can publish this duo in a performable version as one of the first publications of 2015 (HN 1265). We owe this to Robert Levin who completed the piece, based on what is extant, hence adding a little gem to the duo repertoire for violin and cello, which we hope will give musicians pleasure.