Posted on March 2, 2015 by Annette Oppermann 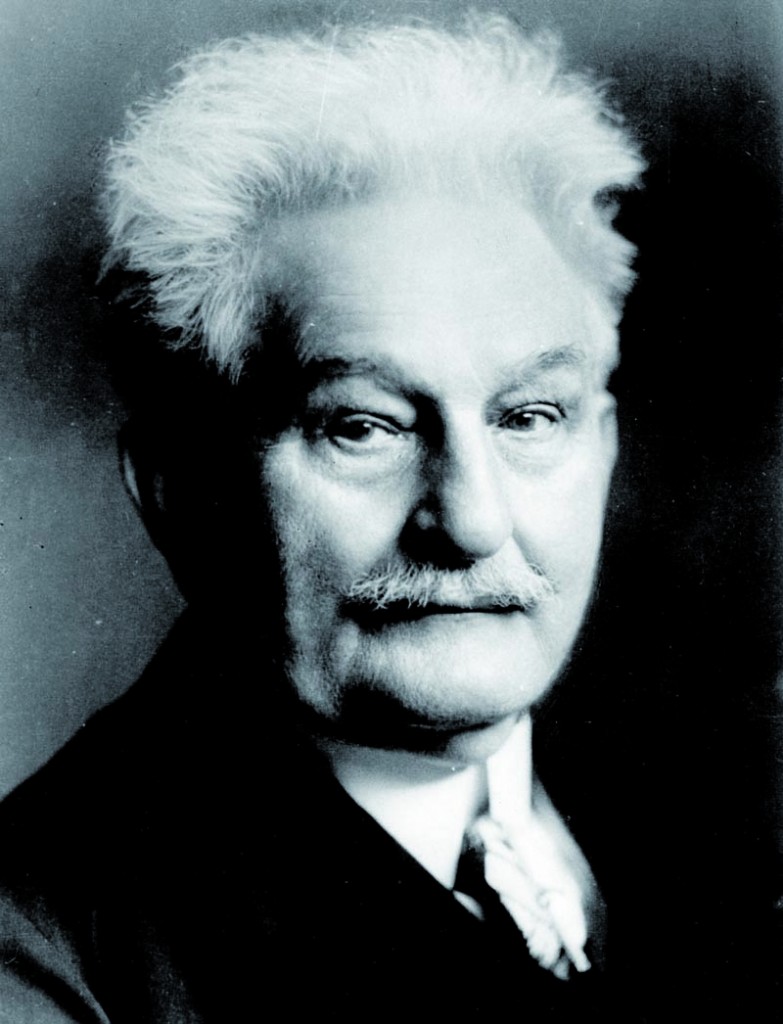 It is always a special moment whenever a new name joins the series of composers in our Urtext catalogue – and this is especially so in the current instance, because with the wind suite Mládí by Leoš Janáček (1854–1928), the 20th century in the area of Czech music also arrives at Henle publishers. That the publishing house can first bring this about in its 6th decade after founding is incidentally also fitting: it was, namely, just in this decade of Janáček’s life that he was most productive owing to private, professional and political reasons. 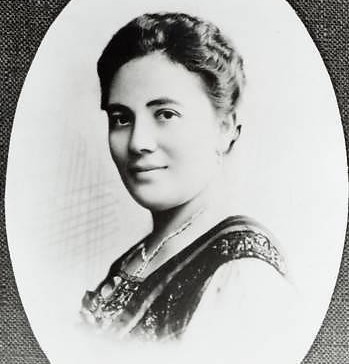 First of all, the Prague revival of his opera Jenůfa in 1916 finally brought him longed-for recognition as stage composer; secondly, the founding of the Czech Republic in 1918 elated the committed nationalists; thirdly, his conclusive withdrawal from teaching in his mid-sixties in 1918 now also granted him sufficient time for composing. But above all, in 1917 he had found a muse in Kamilla Stösslová, nearly 40 years younger, who enflamed not only his personal feelings, but also his artistic powers in a virtually incredible manner.

And so in his last decade Janáček wrote besides nearly 700 love letters (published by John Tyrrell) also numerous compositions, among them several operas, his famous Sinfonietta, the sonorously powerful Glagolitic Mass – not to mention the inventive piano and chamber music that is naturally of special interest to the G. Henle publishers.

Mind you, it is quite a challenge to publish in Urtext works such as the lively wind suite Mládí (HN 7093/1093), since the composer’s creative work is usually spread over numerous sources where alterations and additions were done by many different hands. 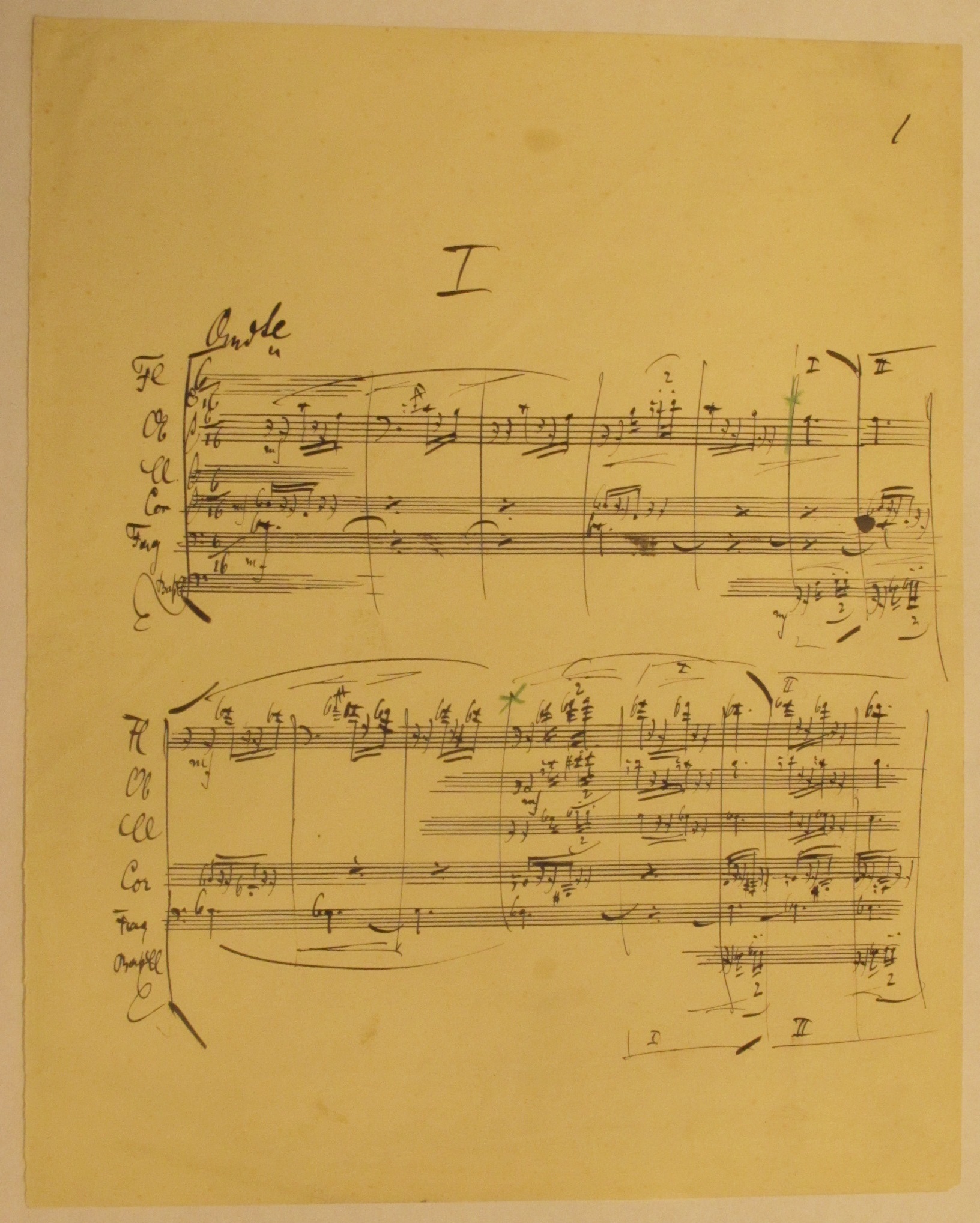 So, with Mládí, the autograph (beautifully notated!) plays a rather subordinate role, whereas various (!) copied sets of parts and scores for the first performances in Brno and Prague give evidence of the numerous changes the composer made in collaboration with interpreters – though not necessarily notating them himself, but even letting the musicians or his trusted copyists also record them. And the engraver’s model of the score already created before the first performance was, in fact, repeatedly updated by additions, yet so many compositional layers are also mixed in with these that assuring the authenticity of every single entry is impossible. 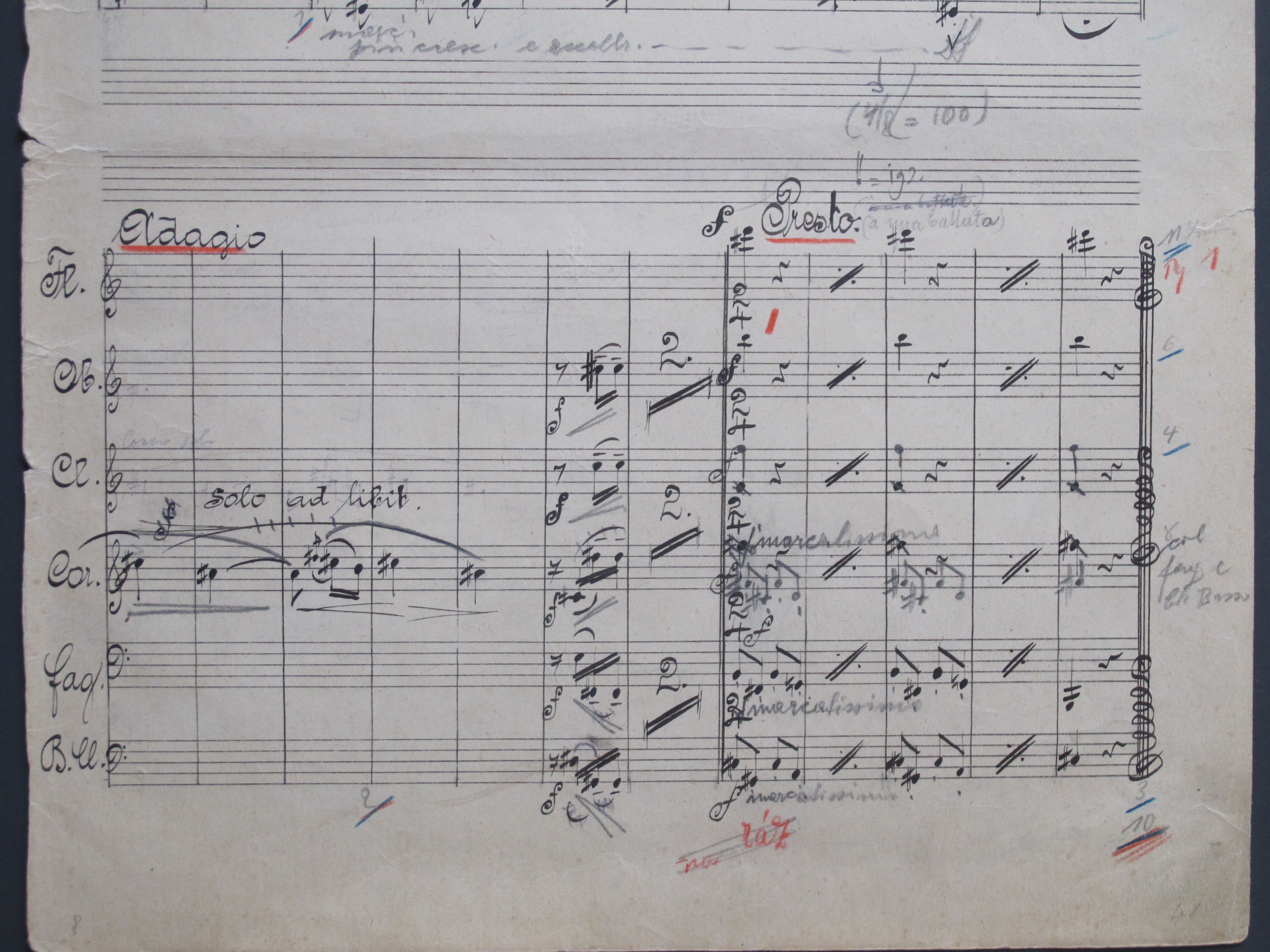 This principle of “write and let be written” is carried forward into the first editions:  Janáček sometimes gave the publishing-house staff so much freedom that additions in unidentified hands are frequently to be found, especially in the editions of parts. And vice versa, the example of Mládí also shows that not all of Janáček’s changes were entered into the first edition published by the Prague publishing house Hudební matice.

Excerpt from the Brno horn part with a correction by a copyist, end of movement I (Brno, Moravian Museum, Janáček Archives)

Excerpt from the Prague horn part with the later variant, end of movement I (Prague, Conservatory Archives) 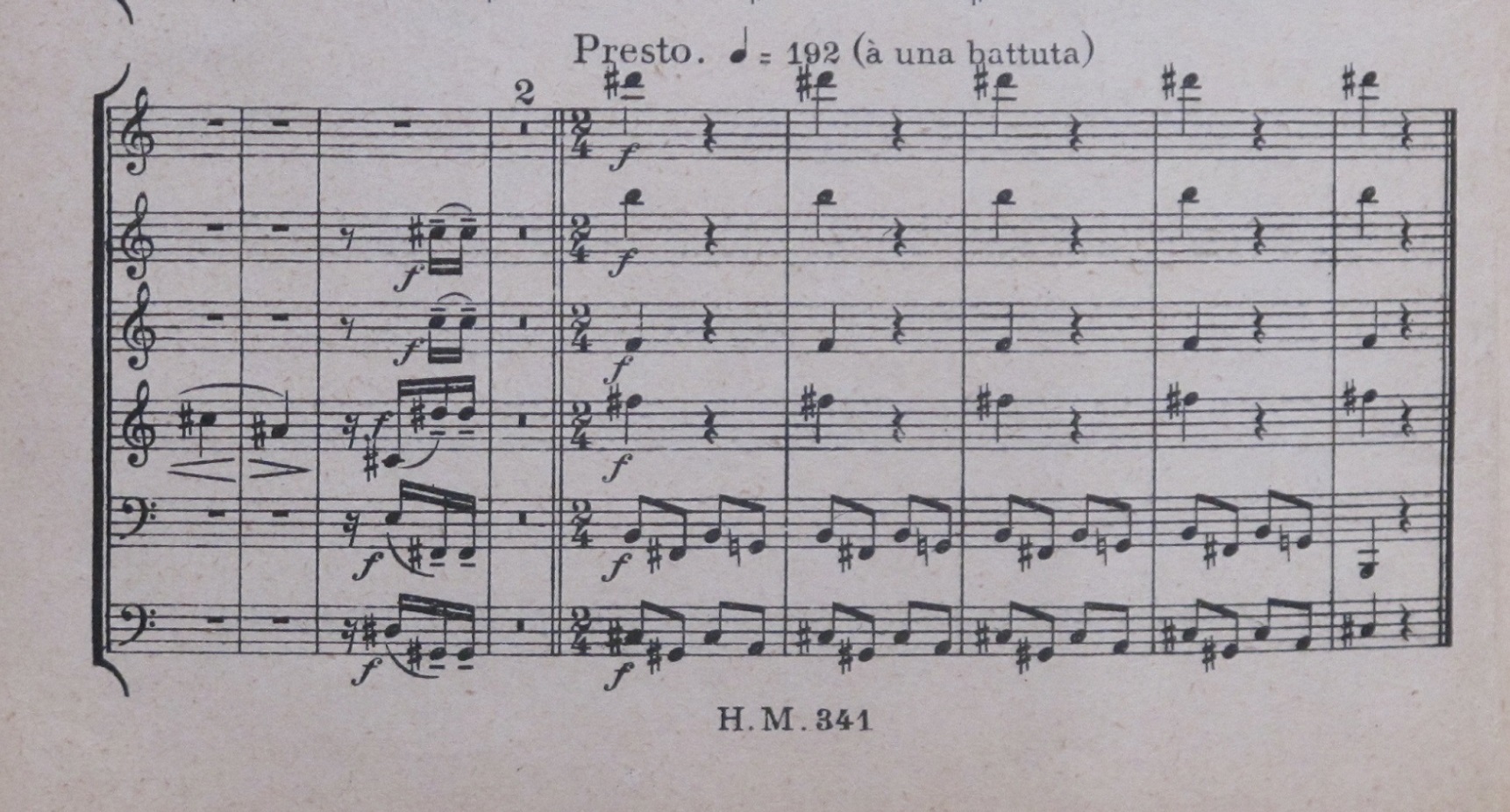 Excerpt from the first edition with the earlier variant (line 4), end of movement I 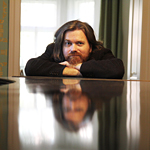 The text of the work that the composer desired is thus hidden in a maze of tradition that has to be most carefully investigated – for which we have secured a specialist well-placed in the truest sense of the word: Jiří Zahrádka, as curator of the Janáček Archives of the Moravian Museum in Brno, is most familiar with the rich tradition of Janáček’s life, work and impact. He has created for us from all of the sources (completely included here for the first time in an edition of the work) a score of Mládí that comes as close as possible to Janáček’s own ideas of an ultimate text of the work. At the same time the score makes documented alternatives in the tradition transparent and playable, while, for example, documenting in footnotes the slower tempi of the Brno first performance. 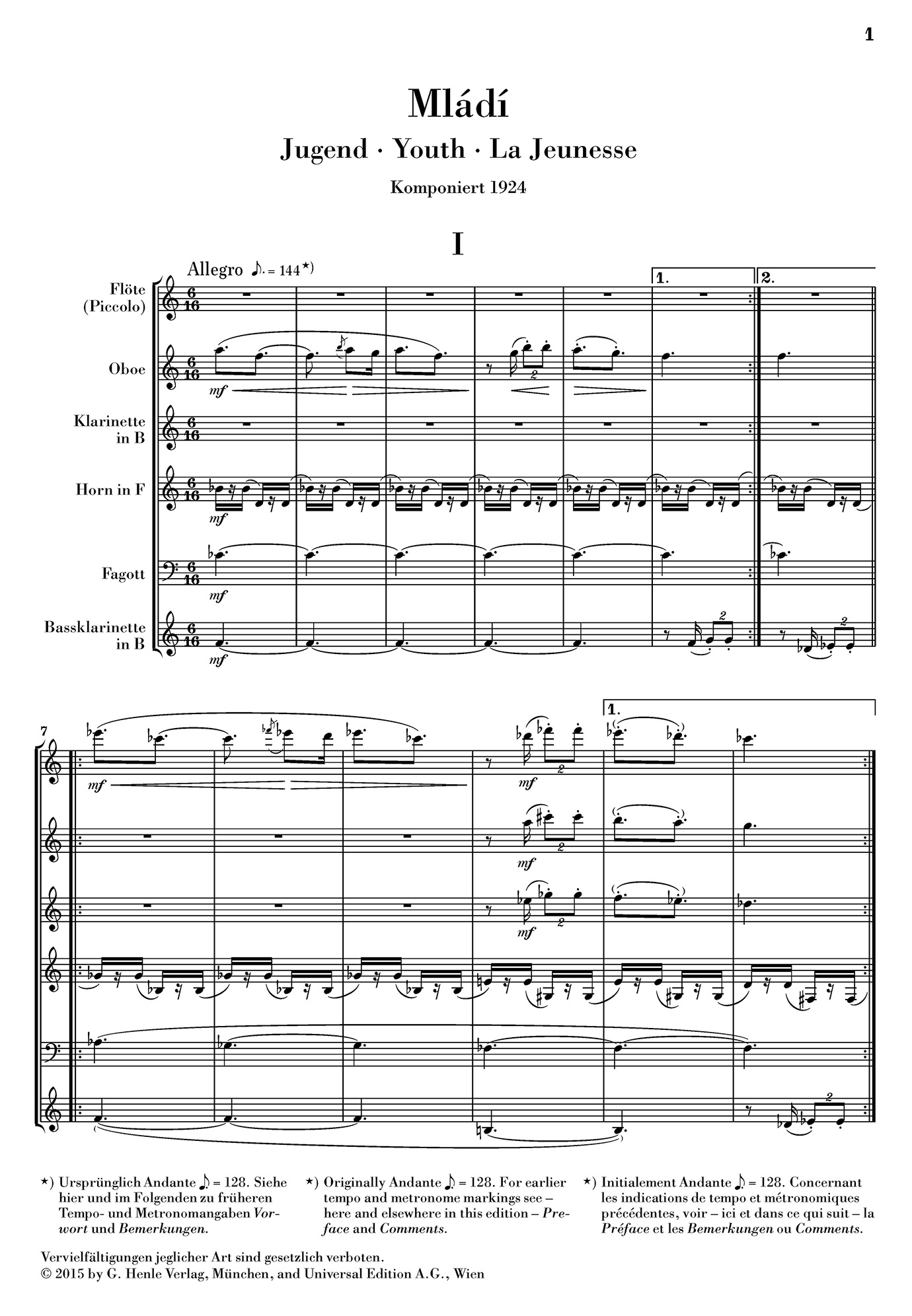 Furthermore, for the benefit of our “Janáček Project” editions, we have teamed up with the Universal Edition Wien, a Janáček publishing house from the start having long years of experience with the complex scores of the Czech Master’s large stage and orchestral works (most recently in the new critical edition of the Makropoulos Affair – likewise by Jiří Zahrádka). For Mládí is only the beginning: Look forward with us to a lot more discoveries from the Moravian soundscape of Leoš Janáček!