For composers, commissions or dedications of works could pay off, most of the time in cash or valuables – we think of the snuffboxes popular in the 18th century –, on occasion also in positions or annual pensions. On the other hand, composing a music piece in return for preparing a meal would, however, be very unusual. But the maxim a “favourite dish for a favourite piece of music” does in fact apply to the genesis of Mendelssohn’s Concert Piece in F Minor Op. 113 (MWV Q 23) for clarinet, basset horn and piano.

When at the end of 1832 the Munich court musicians clarinettist Heinrich Joseph Baermann and his son Carl who also appeared as basset hornist, stopped by for a bite to eat at Mendelssohn’s home in Berlin, an odd deal was struck: They promised their composer friend an ample portion of the beloved  Dampfnudeln [steamed dumplings] and Rahmstrudel [sweet-cheese strudel] – Austro-Bavarian specialities that the composer had become acquainted with on a visit in Munich, but could not get in Berlin –, if he would write them a piece to use on their concert tours. 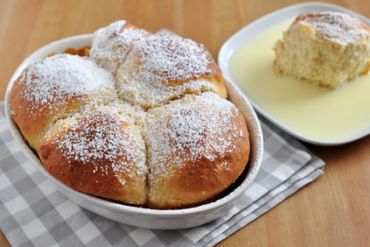 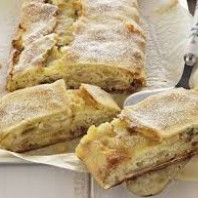 In his “Erinnerungen eines alten Musikanten” [Memoirs of an Old Musician] (1882), Carl Baermann described the incident of 30 December 1832 as:

“When I arrived at his home at the appointed time (9 o’clock in the morning), he [= Mendelssohn] plopped a chef’s hat on my head, tied an apron around my waist and stuck a cooking spoon in the apron’s waistband. He then submitted himself to the same procedure but instead of a spoon he put a quill behind his ear and led me down to the kitchen to the great delight of his kitchen staff. He then returned, as he put it, to his keyboard oven where he himself would stir, knead, salt, pepper and sweeten before concocting a spicy sauce for it and cooking it over a hellish fire. […] We tried out the duo that same evening and after some minor technical instrumental changes, father and I were truly able to claim that we were more delighted with the charming work than Mendelssohn was with his ‘nudel’ and ‘strudel’, although he always swore that my dumpling creation was much more ingenious than his. We thus immediately arranged for a repeat of that scenario, which took place a few days later with the same success.”

The two Baermanns were so enthusiastic that they urged Mendelsohn to give them another piece in this setting – the Concert Piece in D Minor Op. 114 (MWV Q 24) –, which the composer also delivered somewhat later, on 19 January 1833. The two compositions, equally popular with clarinettists and basset hornists, are shortly to appear in a new edition from the Henle publishers (HN 1067), edited by Frank Heidlberger. 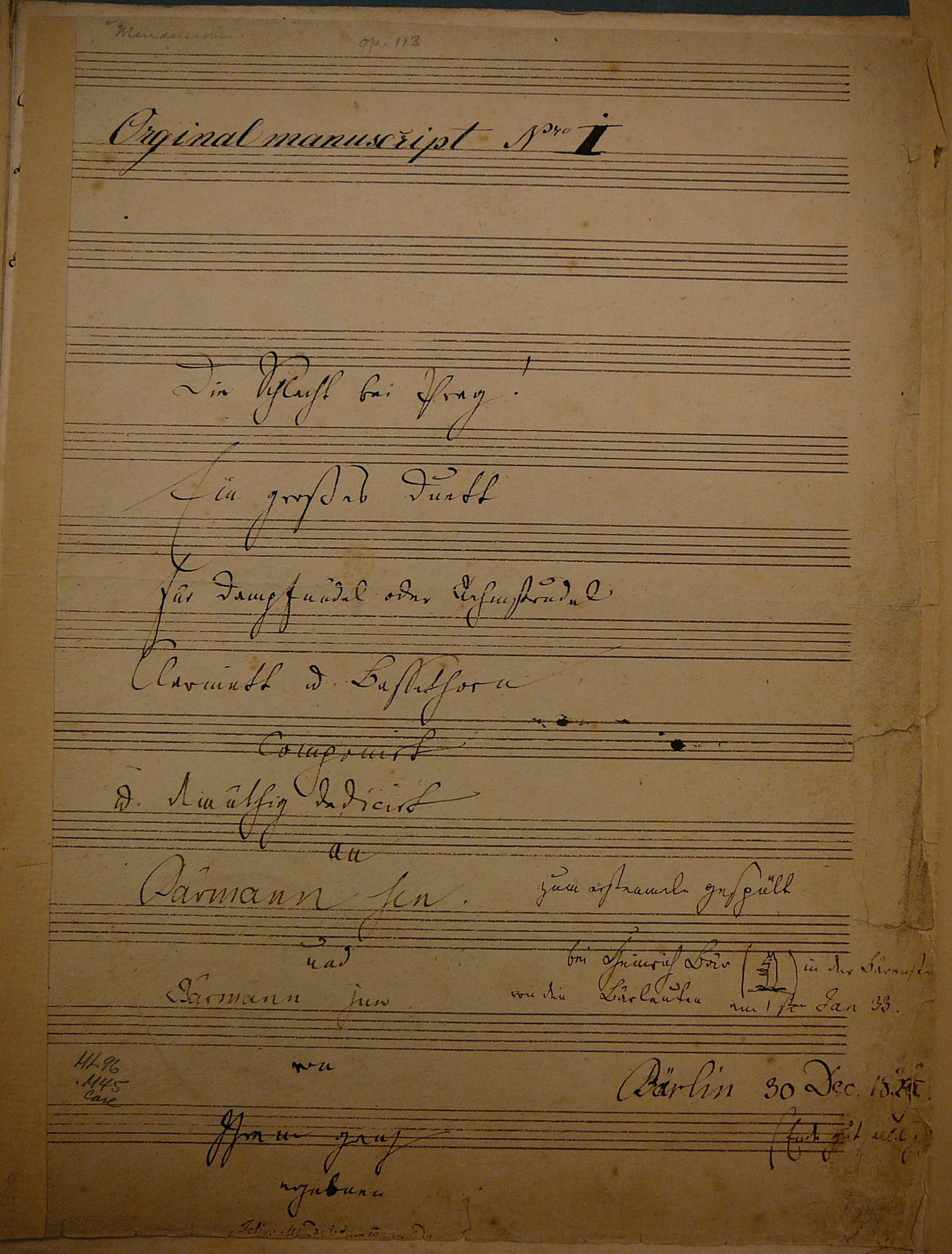 No matter how amusing the story of its origin may be, the edition is not without its problems. This is especially true for the first of the two concert pieces that, as depicted, was composed all in one day. Mendelssohn’s original manuscript was accordingly very hastily written and with numerous corrections. On the title page, Mendelssohn refers to the composition as “Schlacht bei Prag” [Battle of Prague] and “Großes Duett für Dampfnudel oder Rahmstrudel [Grand Duet for Steamed Dumplings and Sweet-Cheese Strudel]”, possibly alluding in the main title to the historic battle of Prague in May 1757 between Prussia and Austria – thus a Prussian composition for Austrian(-Bavarian) cuisine. But Mendelssohn’s humour also does not spare the name of the dedicatee: The “Bär” [bear] in “Baermann” is used in many puns (such as “Bärlin” instead of “Berlin”), crowned with his own drawing of a bear.

One problem is hiding out right in the autograph’s first line of music, possibly owing to a simple writing error. The cadenza for the basset horn, ending in measure 10 on a low c (sounding F), moves to the home key of f minor (notated as c minor), though the 2nd note e flat (sounding A flat), notated by Mendelssohn in measure 9, results at the end of the cadenza in the sequence a flat-e flat-c (sounding d flat-A flat-F), therefore as A-flat-major (sounding D-flat major) instead of the expected home key. 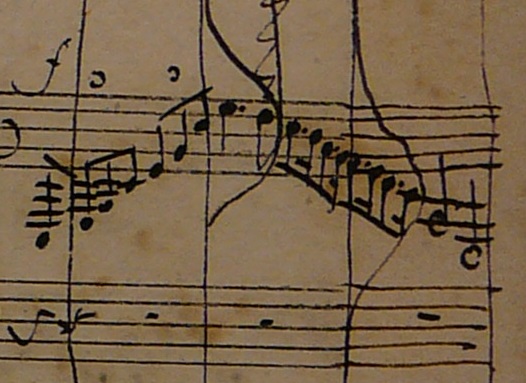 It appears that in measure 9 Mendelssohn drew one leger line too many and really wanted to notate g (sounding c) as the 2nd note, hence resulting in the sequence a flat-g-c (sounding d-flat-c-F). This suggests that the basset horn involved here is itself in error, because in the posthumous edition of the two concert pieces (published in 1869 by J. André with opus numbers 113 and 114), the publisher has had illustrated, based on a copy by Carl Baermann, an excerpt from the “original manuscript”, containing precisely this “correction” – certainly dating from Carl Baermann:

Printed then in the first edition itself is, however, a more elaborate cadenza by Carl Baermann. Mendelssohn’s own orchestral version of the first concert piece also shows a differing cadenza version, which therefore does not further help with the spot in question.

A glance at the old Mendelssohn Complete Edition reveals something surprising: Here, that is, the half note in the second half of measure 9 is replaced by two quarter notes g-e flat (sounding c-A flat).

For this edition the editor of the volume, Julius Rietz, evidently used an also extant personal copy where exactly the same music text is to be found. But what was his model for it? And how does the half note come to be two quarter notes?

Here a further copy comes into view, extant of which is, though, only one leaf, namely the title page and on its backside the beginning of the first concert piece. Unfortunately, the cadenza here is under a paste-over; but at least we can recognize without a doubt that there are two quarter notes in the second half of measure 9.

Since the copy comes from the Baermann milieu and shows several traces of Mendelssohn’s hand (cf. “crescendo” at the right in the figure), this change still possibly made in January 1833 may be taken as authorised. But remaining unclear is how it came to be there and whether it goes directly back to the composer or was merely a suggestion by Carl Baermann approved of later. In our edition the quarter-note solution appears in the main text since according to the current source situation it represents Mendelssohn’s “final word”; however, referred to in a footnote and comment is the original, together with the “corrected” half note.

It goes without saying that the quarter-note solution is also to be heard in the following recording from 2009.