You presumably know Mozart’s A-major Piano Sonata KV 331 (with the “alla turca” rondo). One of the best-known sonatas, if not THE best-known, of the entire piano repertoire. And yet it is the bitter truth that to this day we all play this famous sonata incorrectly, not in any event like Mozart wanted it. How so? Up to now there has been no single error-free music edition of this famous piece. The 19th century had garbled the sonata almost beyond recognition: Urtext editions of the 20th century (even ours so far) have essentially had to make use of the first edition (“opus 6” in the Artaria publishing house, Vienna, 1784) as the best available basis for the text because Mozart’s autograph (up to the last page of the “alla turca”) was lost.

“Was” – but now, for the sensational! In September 2014, Balázs Mikusi, Head of the Music Department in the National Széchényi Library in Budapest, discovered a previously, totally-unknown double leaf of the famous A-major sonata written entirely in Mozart’s hand. It contains essential sections of the work (from the 3rd variation of movement 1, mm. 55 ff., up through m. 10 of the trio). Some of you will perhaps have followed the news coverage of this sensational find.

I was able to examine this Mozart autograph, study it intensively and make source comparisons – thanks to the generosity of Mr. Mikusi and his library. That’s why a completely revised Henle Urtext edition of Mozart’s A-major sonata will be available as of the beginning of June 2015. Then, essential sections of the sonata will exist for the first time in a well-grounded music text. And the music world will sit up and take notice: For a number of the notes have had to be corrected, innumerable details put straight.  On the other hand, the newly-found autograph will confirm that several places in the text of the first edition always considered “problematic” were actually intended by Mozart.

1st movement, variation VI, Allegro, measure 116, last note in the left hand: Here in all modern editions is a wrong A-major chord in the lower register. According to the autograph, the single note A1 in the autograph is correct: 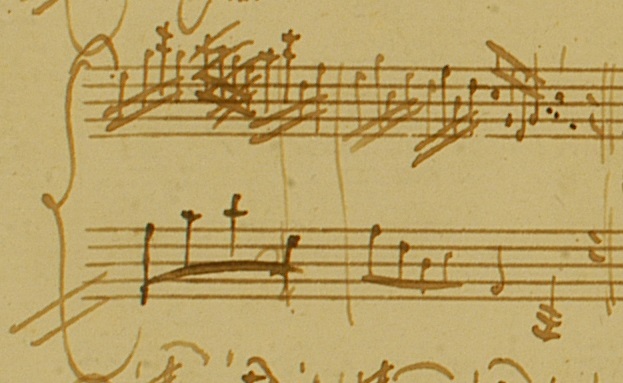 2nd movement, Menuetto, measure 3, last note in the right hand: Here in all modern editions is a wrong quarter note c sharp3 (thus, also in the repeat in m. 33). According to the autograph it must be a2 (and with a full-measure slur):

You can look forward to the new Urtext edition. So, as already said: On sale as of the beginning of June 2015 (and anyone who really wants to be completely in the know, can find on the Henle website a detailed discussion of the “new” autograph and other primary sources for KV 331).

How popular especially the “Turkish March” is nowadays, is demonstrated by Aleksey Igudesman and Hyung-ki Joo.

8 Responses to »The music world will sit up and take notice! On the new Urtext edition of Mozart’s Piano Sonata in A Major KV 331«