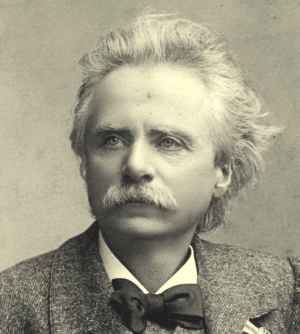 Among the most popular and successful of Edvard Grieg’s compositions are undoubtedly his “Lyric Pieces” for piano, published between 1867 and 1901 in ten separate volumes and ultimately combined into one complete volume in 1902. Yet though the editions were already reprinted thousands of times during his lifetime, many errors and oddities still remain unaltered to this day…

Now, it’s finally come to an end:  after intensive source research and editorial work the complete volume is appearing in the autumn with all of the “Lyric Pieces” (HN 1136). For this our editors Einar Steen-Nøkleberg and Ernst-Günter Heinemann could evaluate for the first time several autographs and sketches still not accessible in the 1970s for the Grieg Complete Edition. The numerous inquiries we’ve received from customers and dealers show us that the new Henle edition is being eagerly awaited. And as a matter of fact it has been worth the effort, for although Grieg thoroughly proofread the first prints of his works and his Leipzig publisher C. F. Peters had them engraved with great care, yet one or the other printing error crept into the “Lyric Pieces”.

So, for instance, in the third piece in volume X, op. 71 – the same hobgoblin [Kobold] that served as namesake for this piece probably played a prank on the composer. In both hands of measure 16 the final note reads c flat in the print, in keeping with the key signature:

But, of course, every pianist is startled when two measures later there is explicitly a cautionary accidental before the c flat – was then c meant, however, in m. 16? At the end of the piece the passage appears once again, this time up a fourth, and confirms this supposition:

The autograph, where Grieg has actually notated the natural signs correctly in m. 16 (to be seen in the digital Grieg-Collection of the Bergen Library), makes it absolutely certain. Only further in the course of publication did the accidentals then “toddle off”… In our edition this oversight is of course corrected and saves the musician from having to wonder, leaf back and forth and make the correction.

Less clear, on the other hand, are the accidentals at another spot. In the lively middle section of  “Entschwundene Tage” [Vanished Days], the first piece of the 6th volume op. 57, there is a dramatic rise leading to a chord full of suspense:

How would you read the red-framed chord in the left hand of m. 70? Upon playing through the piece at the piano I naturally grasped it as e flat/a/c1/g flat1, thus, an unsuspicious diminished chord. However, in fact, it is something else there, because the overall key signature with two sharps makes the c into a c sharp … That results in a bold dissonant chord, though somewhat familiar – and the sound e flat/a/c sharp1/g flat1 actually corresponds precisely to the famous Tristan chord (up a second in the original, notated as f/b/d sharp1/g sharp1). Has the Norwegian master hidden here a little allusion to Wagner? Tristan at Troldhaugen, an attractive idea – but arguing against it is the fact that the c sharp is already consistently resolved to c from m. 65, and Grieg would certainly have clarified such an unusual dissonance with a sharp sign.

A glance meantime at the autograph brings up yet a third reading: for there is in fact also only a natural sign (and no sharp), though not very clearly notated by Grieg just between the 2nd and 3rd notes of the chord: 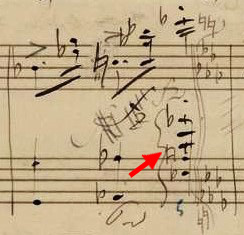 So, it is also conceivable that meant is actually the chord e flat/a flat/c1/g flat1 – and therefore a “simple” dominant-seventh chord on A flat that would also fit very well with the following section in D flat major.

What do you think – which of the three variants did Grieg probably have in mind? Please write us your opinion in the commentary!