Dynamics are in a way the salt in the musical soup: without them even the most interesting composition would seem bland. So it is that in preparing a musical Urtext we must give top priority to the strict observation not only of the notes, accidentals and articulation, but also of the composer’s dynamic directives.

For sometimes it is just the exact position of a dynamic marking that only brings us at all to a musical meaning (see, for example, this blog post by W.-D. Seiffert on Mozart’s string quartets – or this one). Unconventional or seemingly contradictory ways of notat­ing on the part of the composer are therefore never supposed to be tacitly “cleaned up”.

Thus, in his Étude-Tableau op. 39/6, Sergei Rachmaninoff used an unusual combination of dim. and crescendo hairpin in measure 3:

We can see that in the first 4 measures he did not stipulate any absolute, but only relative dynamic intensities: a crescendoing chromatic line ending in an emphatic (sforzato) chord. Hence, in m. 3 he certainly also deliberately avoids an absolute marking and specifies the dim. instead, so that upon repeating the figure the dynamics are to return to their original level of m. 1. The dim. is thus to be read here as “softer than previously” rather than as “dying away”.

Carl Nielsen seems to have had in mind a similar meaning for the dim. marking in his Canto serioso for horn and piano when he notated: 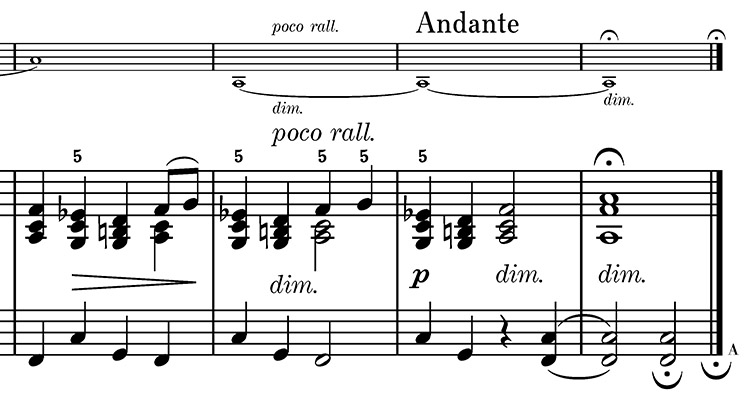 With the decrescendo hairpin and dim. similarly thrice repeated in the piano, the redundancy seems pushed to the limit. But the dynamics make much more sense if we take the dim. to mean gradually becoming ever softer.

The marking of scores since the 19th century with ever more strongly differentiated performance directives leads, on the one hand, to the most extreme expansion of the spectrum (Beethoven already uses ppp and fff, Tchaikovsky takes an orchestral tutti up to ffff in his 5th symphony and even calls for a pppppp from the solo bassoon in the Pathétique); but on the other hand, it also leads to a multitude of novel dynamic markings.

Familiar, for instance, is Johannes Brahms’s penchant for the indication poco forte, which he also abbreviated as pf. This is on no account to be read as “piano – (subito) forte”, which one could erroneously conclude in analogy to the marking fp, meaning “forte – (subito) piano”.

The pf is, though, not actually Brahms’s invention, but was already documented from the 18th century. Thus, in his 1789 Klavierschule [Piano Course] Daniel Gottlob Türk declares the pf to be “1) poco forte, somewhat loud, also probably 2) più forte, louder” and makes the point that meant is “not piano forte, soft loud”.

In our most recent new publications, you can come across, for example, in the clarinet concertos by Louis Spohr (HN 995) and Bernhard Henrik Crusell (HN 1209): 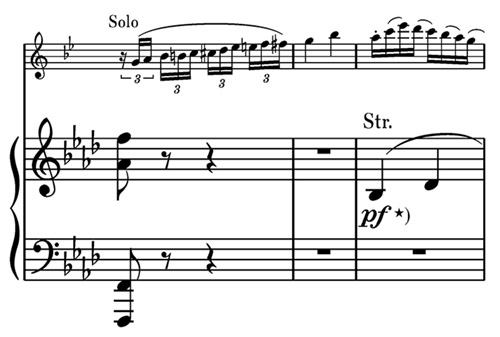 There, the marking is today no longer generally familiar, so we explain it in a footnote.

Perhaps Antonín Dvořák was inspired by the Brahmsian pf, when he introduced a variant of it into the first movement of his Sonatina for violin and piano op. 100: in the autograph he notated a pmf for the violin in m. 21 (after a previous pp), though only p in the accompanying piano:

This suggests reading the dynamics as poco mezzoforte. Here in the first edition are, interestingly enough, two divergent markings for the violin: mf in the score, p in the individual part. Maybe the music engraver didn’t know anything about Dvořák’s unusual directive…?

Alban Berg came up with an especially innovative new creation in his String Quartet op. 3 of 1910 (see our brand new Urtext edition, coming out in November). To be found in the 2nd movement of the violin II is a series of rapidly reiterated notes whose start is always supposed to be stressed, though by degrees less so. After sforzatissimo (sffz) and sforzato (sfz), Berg does actually come logically to just a “mezzo-sforzato”, abbreviated as smfz:

The presentation of this little tour concludes with another nice find: In Alexander Zemlinsky’s Trio op. 3, the violinist faces in the 1st movement the paradoxical task of simultaneously playing louder and softer:

Since the autograph is not extant no countercheck is possible, but in this case the dynamics would most likely certainly not come from the composer, but from the overtired engraver of the first edition …

Do you know of any other such unconventional dynamic markings? Then just leave us a comment!