Having written in May this year about the low tones, I’d like to strike a balance today and write about Beethoven’s efforts towards greater heights. Did he suffer from the constraints of the 18th- and 19th-century piano keyboards going up to only f3 (today, after all, they go up to c5)? Upon closer inspection we might almost get that impression.

So, it is rather noteworthy that to be seen in many themes of the piano sonatas is a deliberate exploitation to the top of the entire ambitus. Here are three examples:

I have little doubt that here Beethoven in shaping the thematic motives was not only conscious of the f3 limits, but that they were also creatively-constructively used. In these and also other examples we sense that the themes would perhaps have been otherwise structured if Beethoven had had available more of a pitch repertoire at the top.

We can repeatedly pose the question as to whether these limits restricted him or spurred him on to creativity. In my last blog posting I gave an example from the “Tempest” sonata, clearly showing how a virtue was made out of necessity – a wonderful spot that no one would ever want to do without:

To the limits of the keyboard we owe the highly dramatic passage marvellously heightened with the held d3 in comparison with the exposition.

Beethoven did not always attain this effect: Have a look at the first movement’s exposition in sonata op. 10 no. 3. Here the composer finds himself forced to break up the consistent upward motion of alternating octaves. In the recapitulation, on the other hand, the figure carries on, and isn’t the effect greater? Whereas the exposition passage sounds to my ears to have all but failed (blasphemy, I know!).

In the design here, his Sonata op. 10 no. 1, first movement, Beethoven takes perhaps the liberty of a downright faux pas:

What pianist today would play this spot from a “reliable source” without g flat3? (Granted that perhaps it really wasn’t a faux pas, but calculated. For in this higher register we can hardly hear that the high tone is not sounding.)

Once instruments opening the range upwards to c4 began to enter the market in the first years of the 19th century, it was not long before Beethoven was deeply taken with such additional possibilities, marvellous to see in the “Waldstein” sonata.

Nothing seems at first to have changed: Beethoven composes a theme complex going up to f3 and no further: 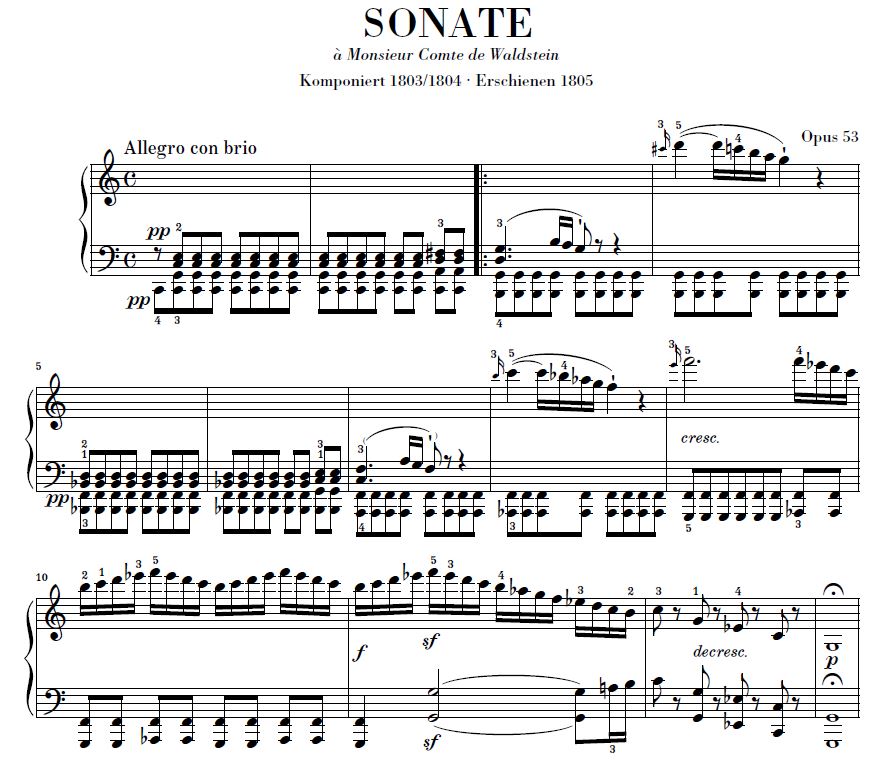 But then the first “boundary-crossings” steal in at exposed places: 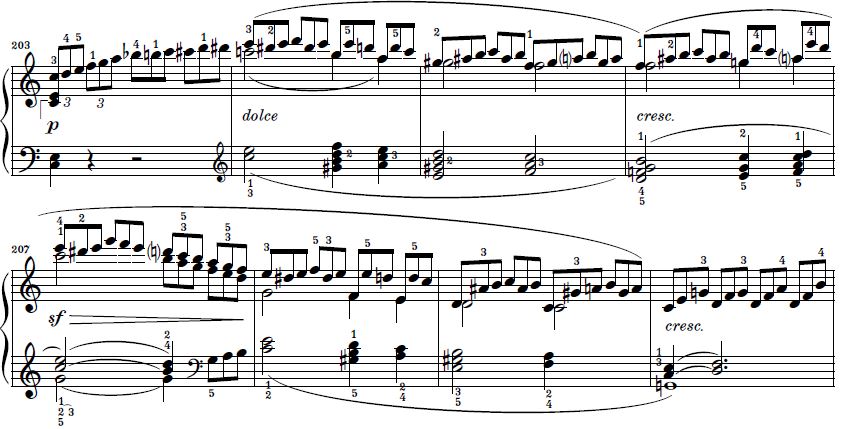 But it is ultimately in the following spot with the supporting trill in pp that an utterly new sound space emerges. We cannot resist the impression that “Beethoven has arrived!”: 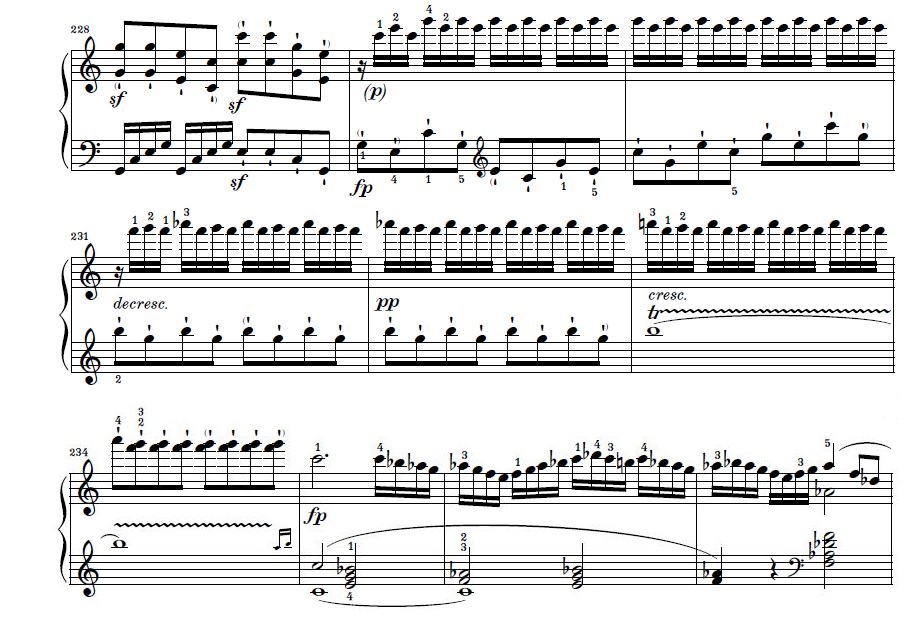 From now on the greater range in this and the following sonatas is established by Beethoven and used as a matter of course. We only have to recall the theme of the final movement of the “Waldstein” sonata:

Or the end of the final piano sonata:

The coexistence of the various piano manufacturers did not always make it easy for the publishers. In order to be able to serve a largest possible market, we can see them in England, for example, forced to publish Beethoven’s works in one version for the traditional piano and another for the new piano. What acrobatics had to be performed as a result, the title page of the English first edition of the 5th piano concerto depicts: “Grand Concerto for the Piano Forte, as newly constructed by Clementi & Co with additional Keys up to F, and also arranged for the Piano Forte up to C …”. As the c4 barrier was then finally breached and the keyboard expanded ever further in the direction of c5, English publishing houses grabbed afresh at resources to serve a largest possible clientele. In the English first edition of the “Hammerklavier” sonata, for example, an ossia stave was used, relegating to it the version exceeding c4 that Beethoven composed, and offering in the main text – authorised by whomsoever – a variant taking the boundaries into account: 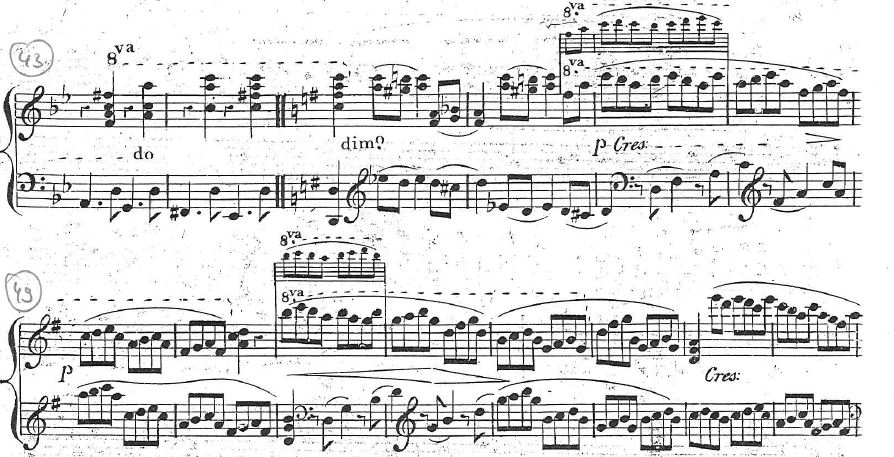 Since the authorisation of the changes in the English print of the “Hammerklavier” sonata is completely open, no one today dares go near these – admittedly poor – variants. The case here is easy to decide. But what to do in the other spots? In my last blog posting on this topic I already made a recommendation: Let’s leave it to the interpreters to decide, so long as they know why! Or?