Antonín Dvořák, director of the National Conservatory of Music in New York City, 1892–95, composed the String Quartet in F major op. 96 early in the summer of 1893 in Spillville, Iowa, where he went to spend his vacation. It is, as he specifically recorded on the autograph of the score, his second composition to originate in the United States, for it was directly preceded by the famous 9th symphony with its much-discussed leanings on the traditional music of native Americans (Indians) and Afro-Americans. 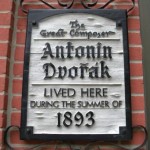 While Dvořák personally gave the symphony shortly before its première its famous tag “From the new world”, the title “American quartet” for opus 96 did not come from the composer himself. Also repeatedly claimed for this work are the influences of native Americans and Afro-Americans, but answering the question of what then is tangibly “American” in the “American quartet” is by no means simple, as Hartmut Schick was able to show in his article. For attributes such as pentatonicism or melodies without leading tones can also be found in European cultures, so must not in any way be taken as typically “American”, per se. Still, we can broadly agree that the strikingly frequent rhythmic ostinatos in the compositions from Dvořák’s stay in the United States (1892–95) probably go back to his experience with Indian chanting to drums that the composer could demonstrably also have heard in Spillville.
An especially prominent example of a rhythmic ostinato, that is, a characteristic accompanying, rhythmic formula repeated unmodified over many measures, opens the finale of opus 96.

I’d like to concentrate in the following on a spot in the scherzo of the quartet that I came upon while preparing the new edition appearing before long (score and parts), and posing more pointedly the question of “Bohemian” (read “Czech”) or “American” influences in a passage with an ostinato rhythm. It has to do with measures 57 ff., where the theme stated by the cello is doubly counterpointed by rhythmic ostinatos.

The ostinatos in question present two variants: as either continuously sounding on the same pitch or as alternating on two or three pitches, but always according to the same model of repeated rhythms. In the scherzo spot mentioned, we are concerned with the second variant: The violins, with their marked rhythm, define the space of an f-minor third, whereas the viola affirms by alternating between f and d flat the theme’s harmonic modulation between f minor and D-flat major. But at the same time the viola part provides with the accent on beat two (only changing to beat one in mm. 62 ff.) a rhythmic counterpoint to the heavily stressed first beat of these measures. 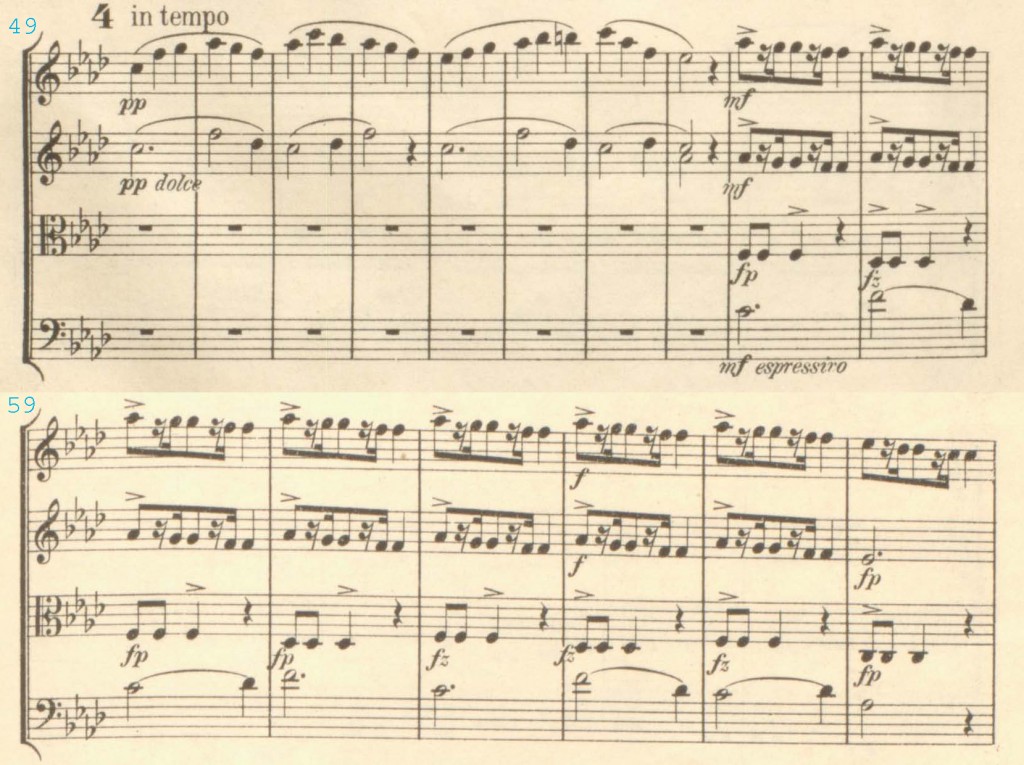 Since, alas, the engraver’s models and galley proofs for these editions published in 1894 by Simrock are lost, the autograph is the only other source under consideration: 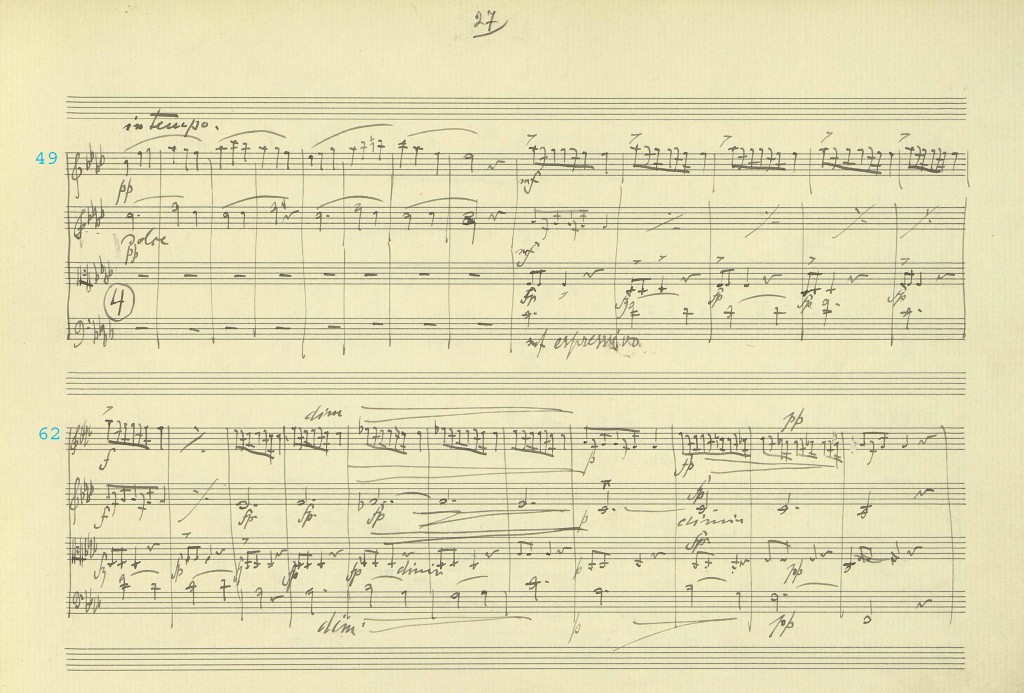 In measure 58 Dvořák actually notates two accents for the viola, on the first and third notes, although in the next measure – contrary to the later print – he already returns to the “normal model” of the accent on beat one. Since the first editions are alike here in placing the accent on the third note in measures 57 as well as in 59–61, what’s found in the autograph looks like a simple writing error. But now Dvořák, as often in this quartet, unmistakeably emphasises the accent on the 1st note by adding fz (instead of fp), making a writing error rather unlikely. A glance at further markings in the following measures – measure 62, fz without accent; measure 63, fp with accent; measure 64, fz with accent; measure 65, fp without accent – reveals, however, that the alternating between fz and fp is not consistently notated. Since a similar arbitrariness also exists in the printed sources, I decided to standardise the notation to fp in all these measures.
The problem remains with the doubled accent in measure 58. In the extant continuity sketch for the quartet, Dvořák notates this spot without any accent. Perhaps, he also initially notated the notes so in the autograph, only not articulating each measure separately thereafter, but groups of measures, respectively. This would explain, partly at least, the numerous oversights – not only here, but also in other spots in the quartet.
The question of which accentuation the composer originally had in mind at this spot cannot be answered with certainty, but it seems as if at first he was intending to put accents only on beat one of the measure, but then considered changing the emphasis, at least sporadically. Such change of emphasis conflicts with the “American” rhythmic ostinato, but is reminiscent of Bohemian [Czech] folk dances, in particular, of the “Furiant” [Czech folk dance], characterised by the shifting of emphases [between 2/4 and 3/4 time]. Did Dvořák momentarily recall, so to speak, his Bohemian roots right in the middle of his “American” quartet? 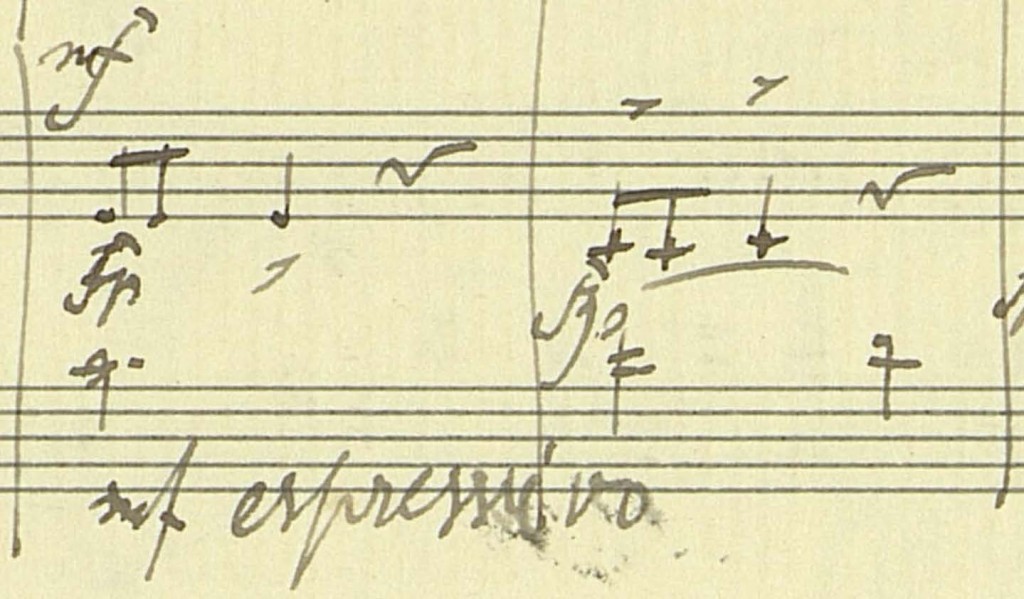 One argument for this hypothesis is the correction in measure 57. Looking at it more closely, Dvořák writes fp over an accent previously notated on the first note. Accordingly, the accents on beat two in measures 57 and 58 would have been added only after this overwriting. But then the composer seems to have reconsidered, for he did not shift the accents of measures 61–62 from beat one to beat two, which would then have been obvious. So it looks as if he were again distancing himself from this “Bohemian” variant, yet forgetting to correct measures 57–58 by eradicating the accents on beat two.

What cannot be clarified, though, is the hypothesis about why the original prints of viola part and score consistently show the accents on beat two not only in measures 57–58 (as an inadvertent holdover of an alternative model), but also in measures 59–61. Was Dvořák supposed to have decided after the trial read-through, to nevertheless rhythmically counterpoint the stressed beat two? But if so, why did he not do this consistently, rather than leaving the change to the accent on beat one as of measure 62?
The contradictions cannot be cleared up. Perhaps the pointed question, “Bohemian” (regular change of emphasis) or “American” (unchanged repeat of emphasis), is not even correctly posited, and Dvořák ultimately decided for a customised mixture in order to provide the repetition of the accompaniment with a minor variant.
I have decided to follow the first edition of the viola part for the spot in question in measure 58, but to reference in a footnote the variant with the doubled accent in the autograph and first edition.

The recording of the “American quartet” by the Pražák Quartet is recommended to anyone who may now wish to listen to this piece.

2 Responses to »A Bohemian in America: Is Dvořák’s String Quartet in F Major wrongly accented?«