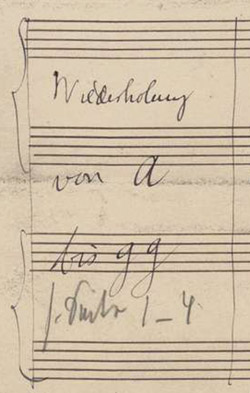 If the ideal goal of a critical Urtext edition may be said to be finding out and representing what the composer “actually intended”, then consulting all the relevant sources for the work, comparing them and evaluating their differences is above all its fundamental task.

Yet this alone is as a rule not enough. For a composer to have a slip of the pen or to forget a sign by mistake (accidentals, typically) is not unusual, and then all subsequent sources such as copies and first prints may take this mistake over blindly. Such errors throughout cannot be detected, though, by merely comparing all the sources with each other. So it is always necessary in addition to check the music text for consistency in itself, regardless of what the sources show. (The edition must also be to a certain extent “critical” towards the composer.)

A good aid for detecting such inconsistencies is taking so-called “parallel passages” into consideration. This can be, for instance, the recapitulation of an entire section in a piece in A-B-A form, or the repeat of a measure or single motive, often sequencing also on another harmonic level. Small differences between otherwise identical measures can be an indication that here something was forgotten. But handle with care: the composer doesn’t need to have intended that everything repeated in a piece or otherwise similar in some way be also exactly the same. It’s also true in music: variatio delectat…

Grieg did in fact carefully proofread the galley proofs of the first editions for wrong notes (though we still discovered a real note error haunting the editions right up to the present). But on the level of articulation and dynamics, the composer was somewhat more negligent. So, our editors found numerous details in question that could often be settled by a comparison with parallel passages.

The first edition of the Arabian Dance from the four-hand version of the 2nd suite op. 55 shows the primo part in mm. 103–104 with the following phrasing, differing between right and left hands at the end of m. 103:

We feel in effect that a more plausible reading in the recapitulation of the first section here is to have the articulation in the left hand match that of the right, just as in the corresponding m. 17 there (see the notes underlined in red in each case):

A glance at the autograph, moreover, makes it evident that Grieg has not written out the repeat at all in mm. 103–104, but saved himself the trouble with a directive for the music engraver. He lettered the relevant measures of the first section and then noted in the recapitulation simply “Repeat from a to gg” (see the illustration at the very top). Hence, it is clear that for Grieg the repeat had to be exactly identical and that the difference in m. 103 certainly goes back to a mistake by the music engraver.

Accordingly, in our edition we align the phrasing in m. 103 with the first spot, particularly as this motive appears another 6 times in the piece in this form:

Curiously enough, a very similar case occurs in the two-hand version of the Arabian Dance with a rhythmic variant of this unison motive, this time already in measures 11–12:

Here, completely lacking in the left hand is the slur, replaced on the last eighth-note upbeat also by a staccato dot, contradicting the right hand (and the above example from the four-hand version).

This time this notation agrees in all the sources, even the autograph has this reading. But we strongly surmise here that Grieg has made a mistake, influenced perhaps by the previous notes to put in an extra staccato dot and to forget the slur. Suggesting this is the parallel spot in mm. 97/98 where the autograph as well as also the first edition again has the “correct” phrasing: 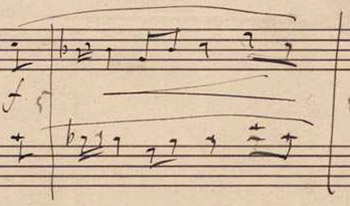 Supported by numerous other incidences of the unison motive with this phrasing, our edition thus also aligns mm. 11–12 with the rest of the spots:

Although the comparison with the parallel passages in the piece were in these two cases very helpful in detecting a single “outlier”, other pieces of the Peer Gynt Suite don’t look so clear-cut.

So, for instance, in Anitra’s Dance from the 1st suite op. 46 the start of the main theme is presented here in the four-hand version in a consistently non-uniform articulation. The first eighth note after the two grace notes is notated 8 times with staccato dots, but 11 times without staccato dots.

Here, 2 examples each, initially with staccato:

Unfortunately, the autograph is lost, and the parallel version for piano solo also shows the same divergences, so that it can no longer be decided whether Grieg really wanted this continual change. And if not (which is to be surmised), then it is still not clear which reading is to be given priority.

In places like these the editor is well advised to exercise restraint and not to “smooth out” the text, but to leave its inconsistency alone. (So that’s also what we’ve decided for our new edition.) Consideration of parallel places may not lead to a general “adaptationitis” far removed again from actual Urtext thinking. But these open questions free up space for performing pianists to respond to them with their interpretations.