Saint-Saëns was likely far from the “genius thinking” of romanticism. Music being, he once stated, the art so to speak of putting together tones, and concerning his artistic production, he would then naturally produce works like an apple tree produces apples. This comparison may at first appear strange, but fully conforms to Saint-Saëns’ aesthetic, he who prioritized form and craftsmanship in composing.

Editors of Urtext editions benefit from this matter-of-fact view inasmuch as Saint-Saëns considered the conception of his works as usually determined from the drafting stage. Whereas many of his contemporaries still made sometimes far-reaching modifications in copies or galley proofs, he normally kept to the autograph version without changing any detail right through to publication.

This approach reduces from the outset the number of variants to be compared in the sources. But it certainly doesn’t mean eliminating questionable spots where the editor must come to a decision – occasionally even contrary to the sources.

Saint-Saëns’ 2nd cello sonata in F major, op. 123, for which I’m just now preparing a new Urtext edition (HN 1280), may serve as an example. Only the first movement is extant in the autograph for the composition that was written in 1905. Comparison of the sources for this movement shows that Saint-Saëns overlooked so many engraving errors in the galley proofs. In measure 34, for example, the right-hand figure in the piano descends parallel to the left. The three 32nd notes of the last group must therefore read d flat–f–d flat1, yet in the first edition (and still even in the present Durand edition), we find f–a flat–d flat1 – a typical engraver’s mistake of a third, as shown by comparison with the identical preceding measure (measure 34 is hence not written out at all in the autograph). 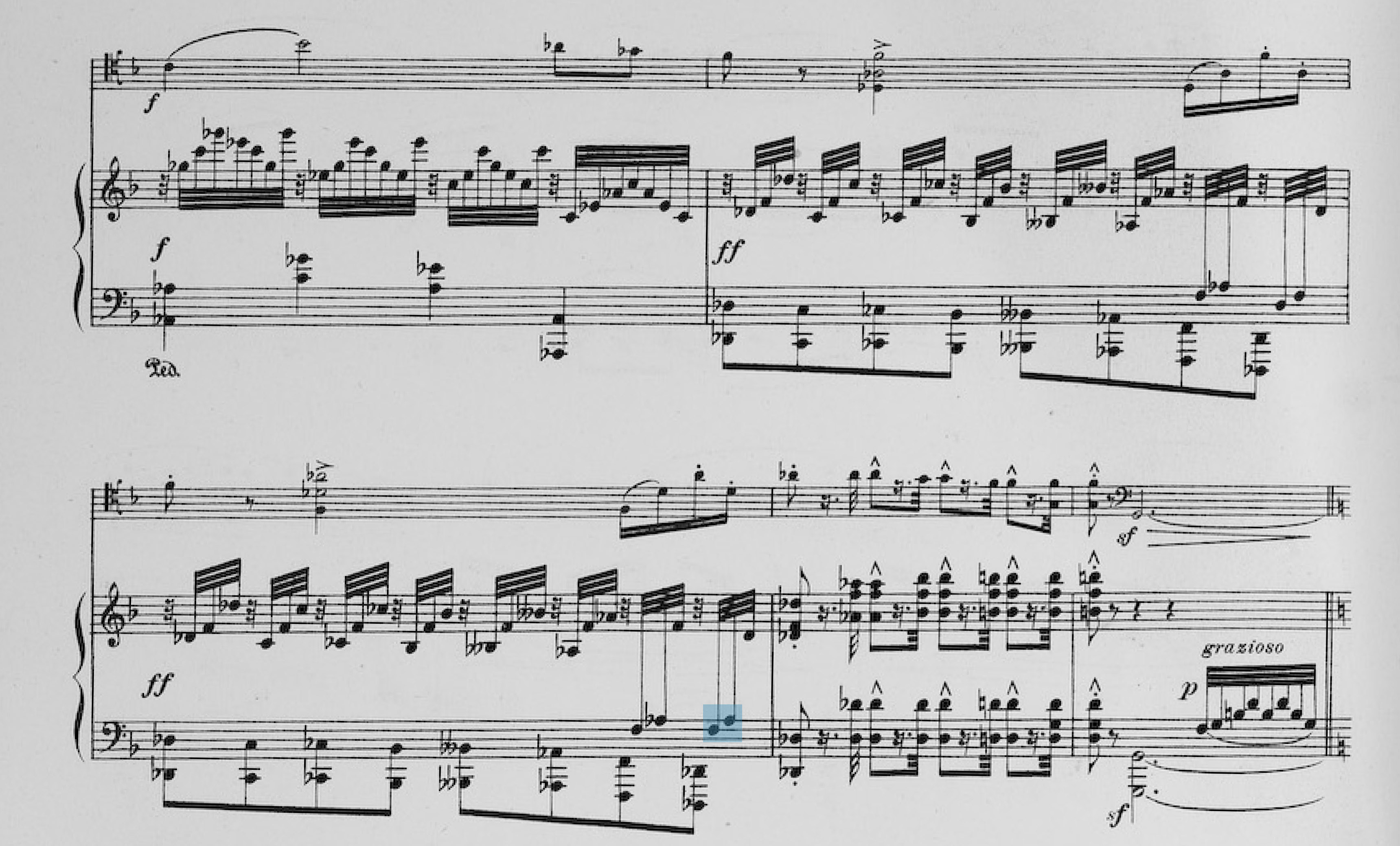 In measure 12 we see that here and there Saint-Saëns is also careless in notation. Lacking, respectively, before the 10th note c in the octave triplets in the piano is a natural sign; the composer evidently overlooked the fact that he had previously notated (at the 3rd note) the melodic lower neighboring tone as c sharp (the desired sequence c–d–e in this 4th triplet is unambiguous, for it is still repeated in the same measure an octave higher). 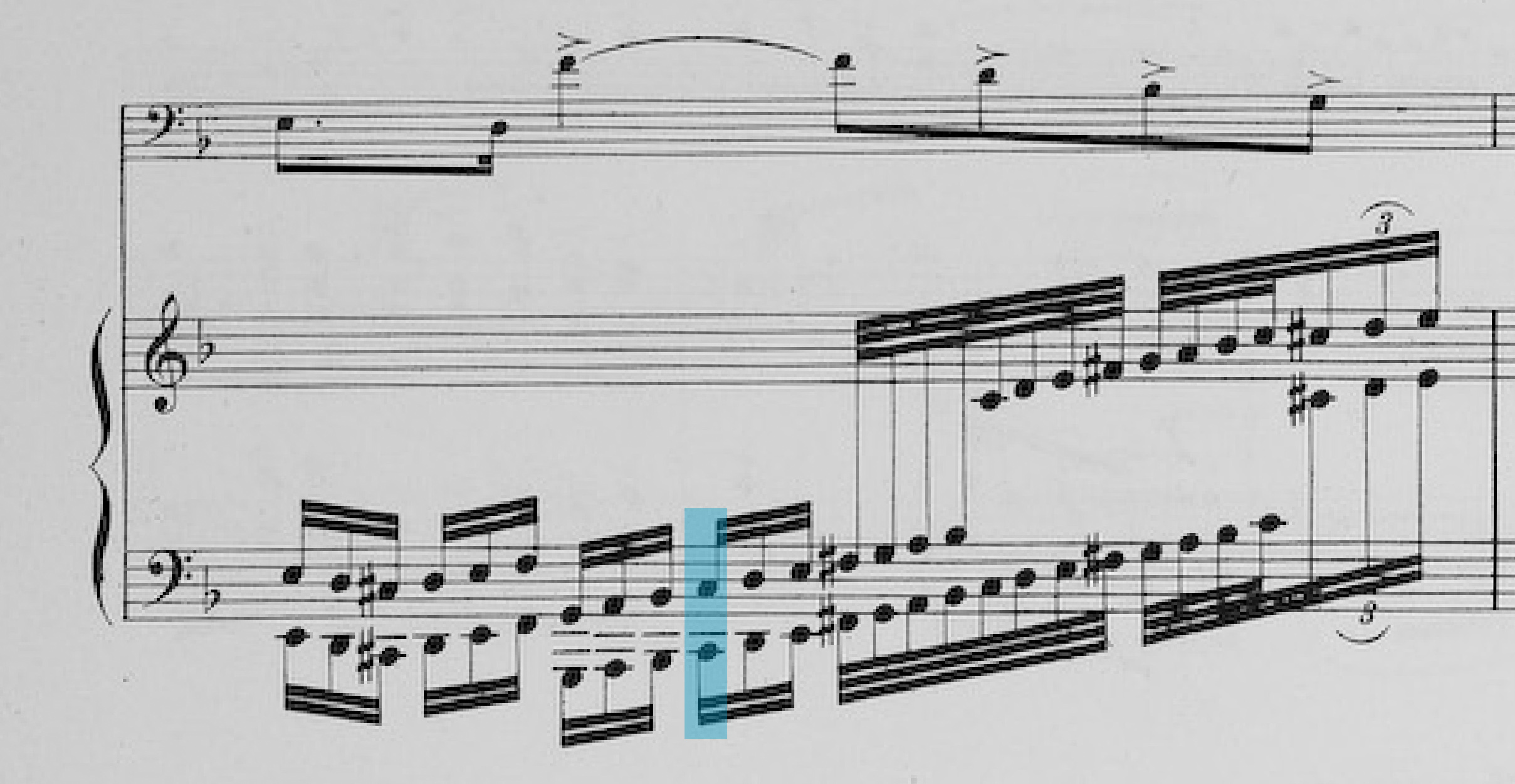 Only in a reprint published around 1910 is the spot corrected: 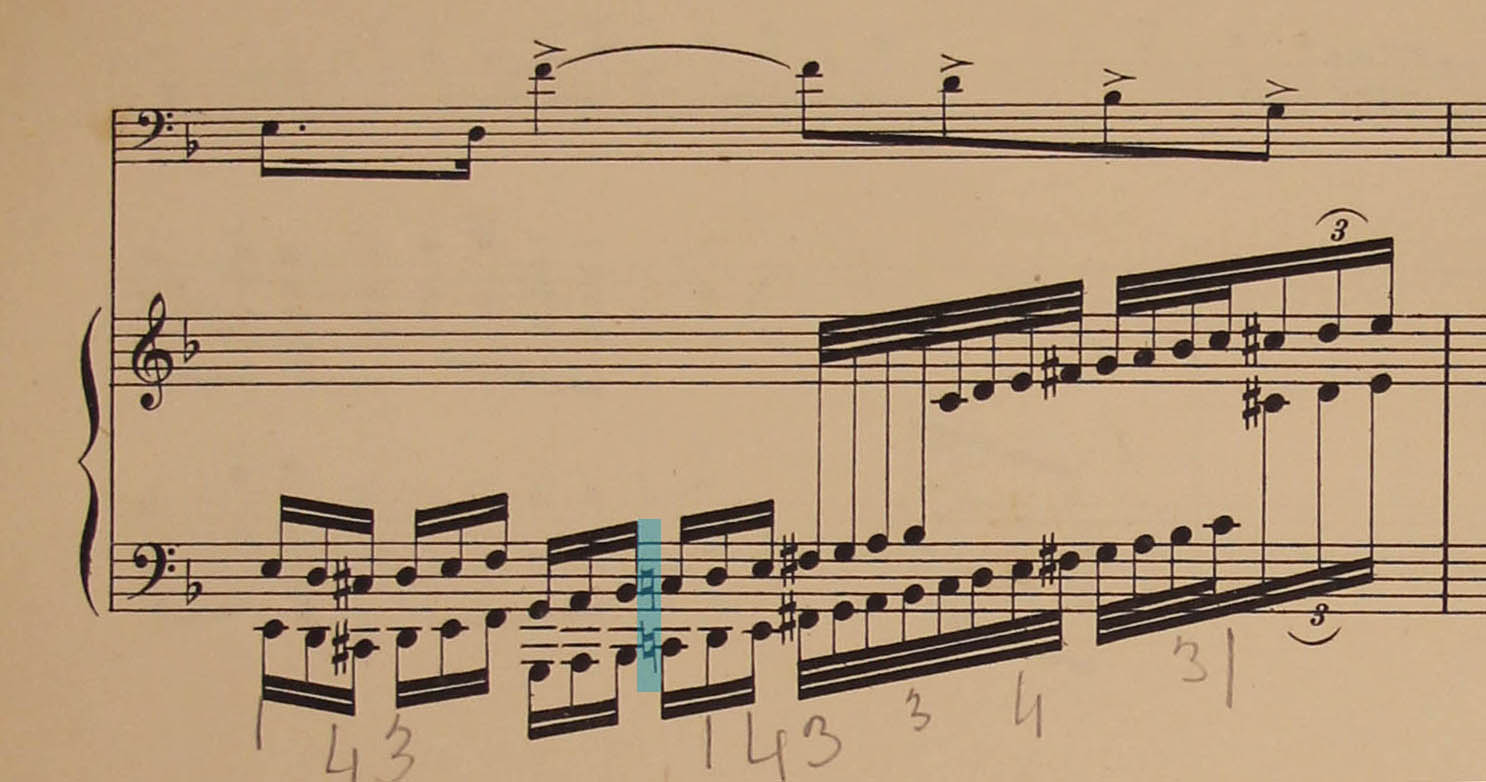 If in these cases the intended “Urtext” is clear regardless of the source findings, then there is doubt in another spot. Inserted in the piano from measure 94 is a descending succession of regular and broken octaves embellishing the return to the movement’s opening motive (appearing in measure 97 in the piano). Harmonically, this is a simple dominant-to-tonic progression, clearly surfacing in the cello as C/c/g/e1–F. In this respect we would expect the descending sequence b flat–g–e–c, etc., from measure 95 in the piano, thus resolving through the C-major seventh chord to F major in measure 97. 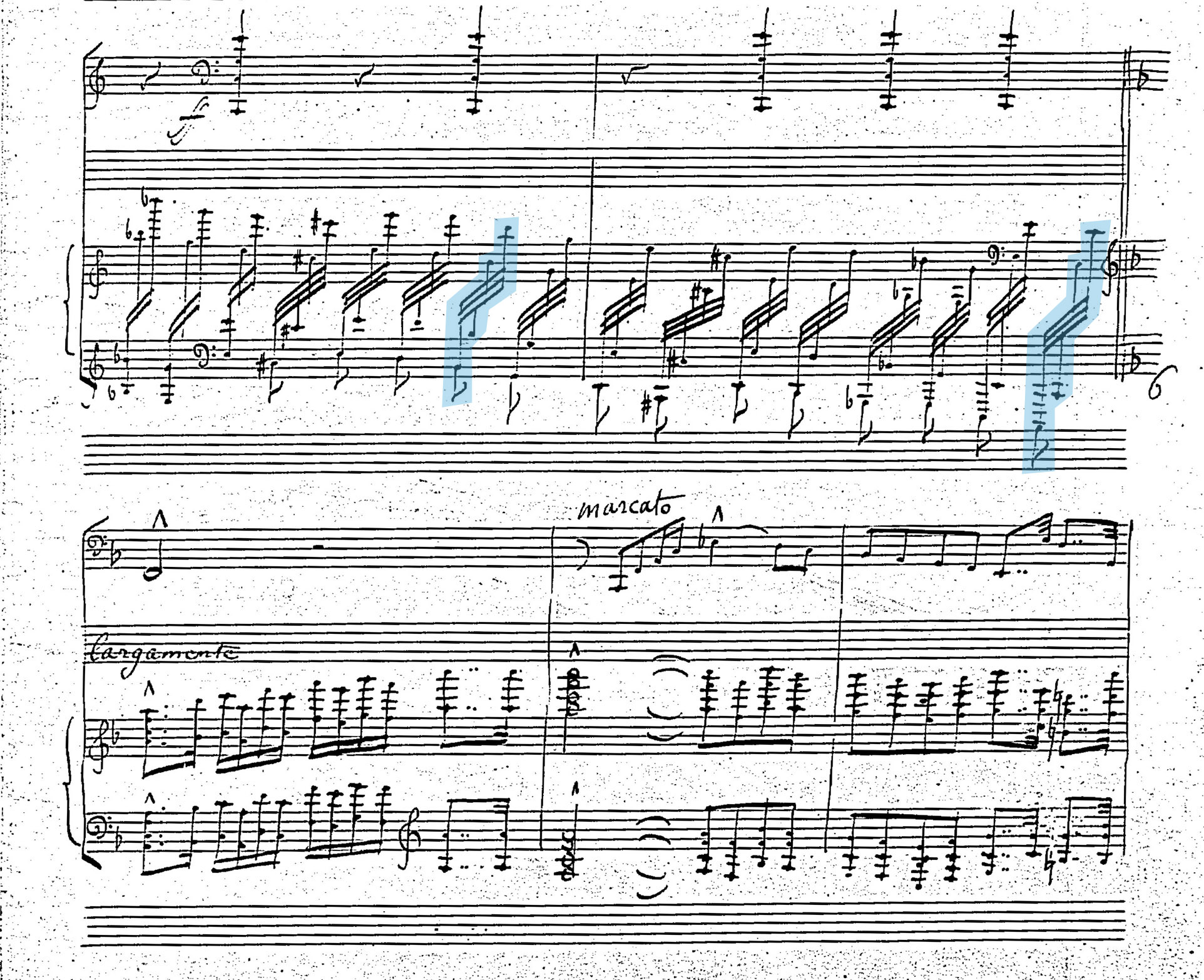 Yet Saint-Saëns notates b flat–g–e–c sharp–e–d (and repeats this sequence in the subsequent octaves), thus avoiding the dominant root and replacing it, as it were, with d, prepared by the neighboring tones c sharp and e.

So far the “apple” offered us still appears fresh and edible – reverting to the composer’s witticism quoted at the outset. But does it last until the end of the sequence, in measure 96, beat 4? Is c sharp meant here in line with the previous model or is it c instead with an eye to the F major at the start of measure 97? In both instances accidentals would be expected – either a cautionary sign before c or ♯ once again. But no accidentals are to be found in either the autograph or in the first edition. Do we have here a “bad apple” on the op. 123 “tree”?

The already-mentioned reprint correcting several obvious errors, but presumably published without involving the composer, adds ♯ before the low C1, (♯ before C does indeed still apply) and consequently indicates a continuation of the model from measure 95. This addition appears, however, inconsistent insofar as now only the left hand plays c sharp, but the right plays c.

But looking more closely at the autograph, it occurs to us that accidentals are already missing in measure 95. Saint-Saëns notated ♭, that is, only once at the start of the measure, but due to the changed octave register it would have to be repeated in beat 4. The composer apparently follows here the earlier (and in his time no longer valid) principle of having accidentals apply for all subsequent octave registers up to their cancellation. Based on this principle, there is no longer any doubt about the fourfold c sharp at the end of measure 96.

This is hence the reading given preference in our edition. 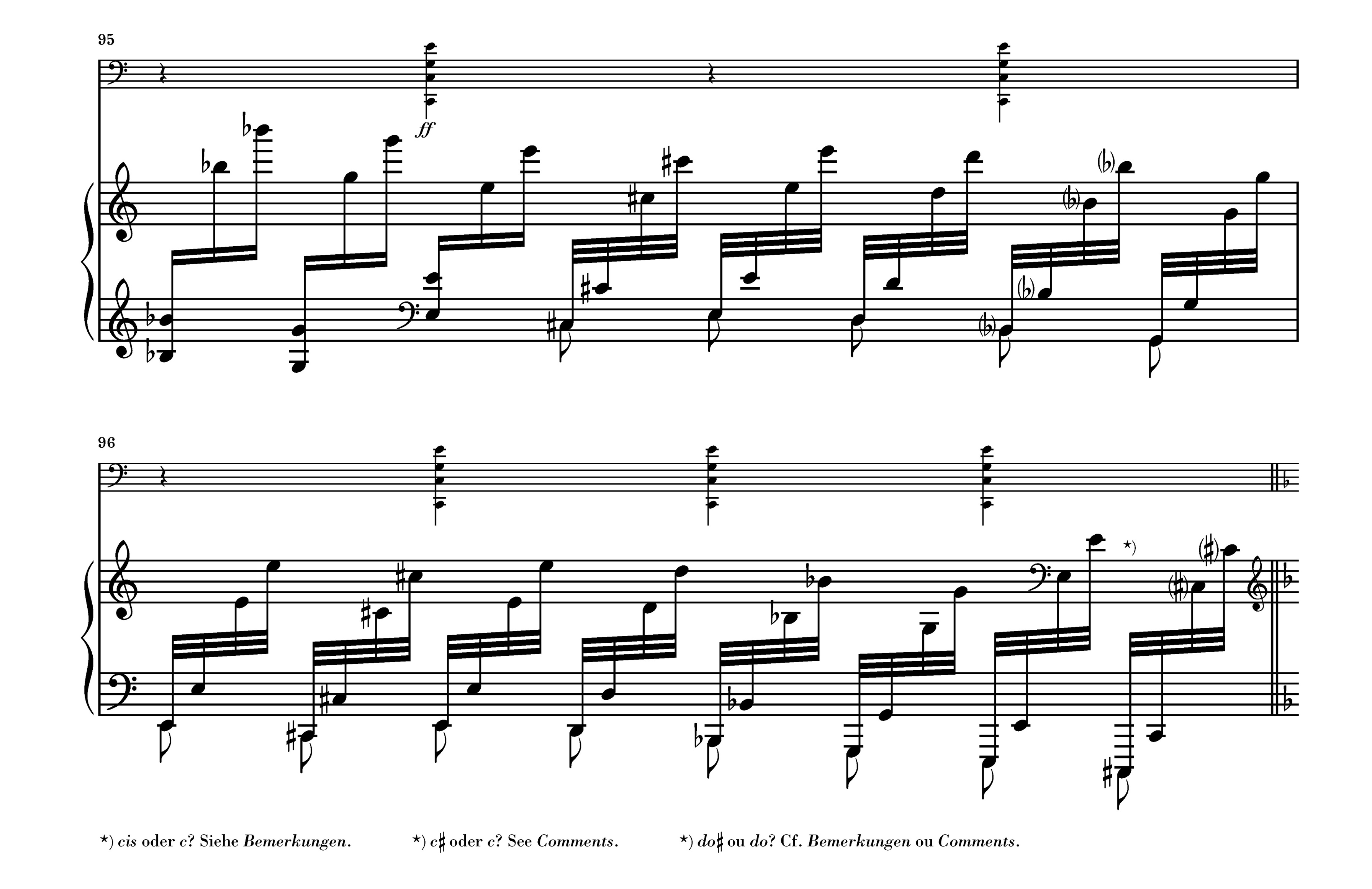 However, since some doubt remains, an additional footnote is recommended. What, dear reader, do you think?

One Response to »A “bad apple” in Camille Saint-Saëns’ 2nd cello sonata?«