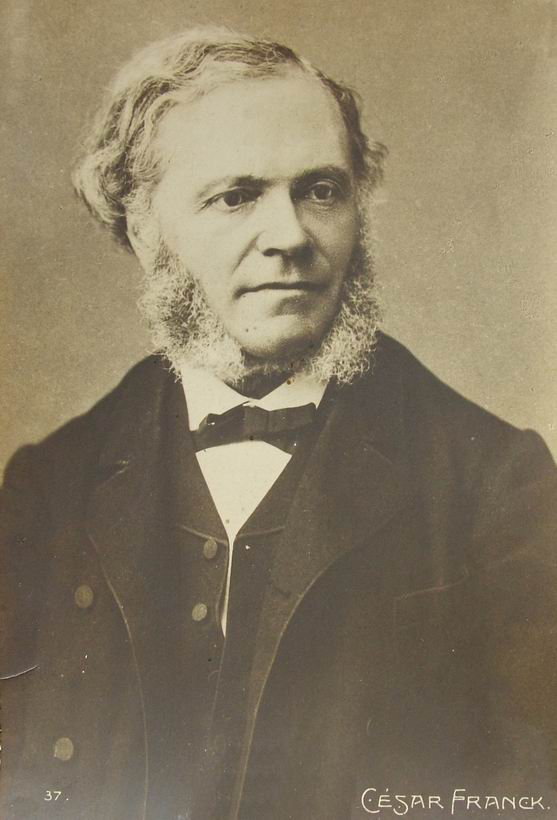 The question of why from time to time editions in the Henle catalogue are re-published as revised was already dealt with in an earlier blog post. Following up on this, I’d like today to present a special case, that is, the just about to be published revision of César Franck’s famous violin sonata.

Henle first published Franck’s masterwork as HN 293 in 1975, so more than forty years ago. That edition was then based on two sources: the (allegedly sole) autograph, together with the first edition, which had not yet been separately treated as score and separate violin part (as is usual today).

The editor Monica Steegmann opened her preface with the sentence: “It has been possible to take the autograph as the main source used to compile this edition.” The wording resonates with what was then the general consensus for critical editions: When the autograph is available and no other sources (galley proofs) or documents (publishing-house correspondence) relevant to publication is extant, then this autograph is equivalent to, if not of higher value than, the first edition. 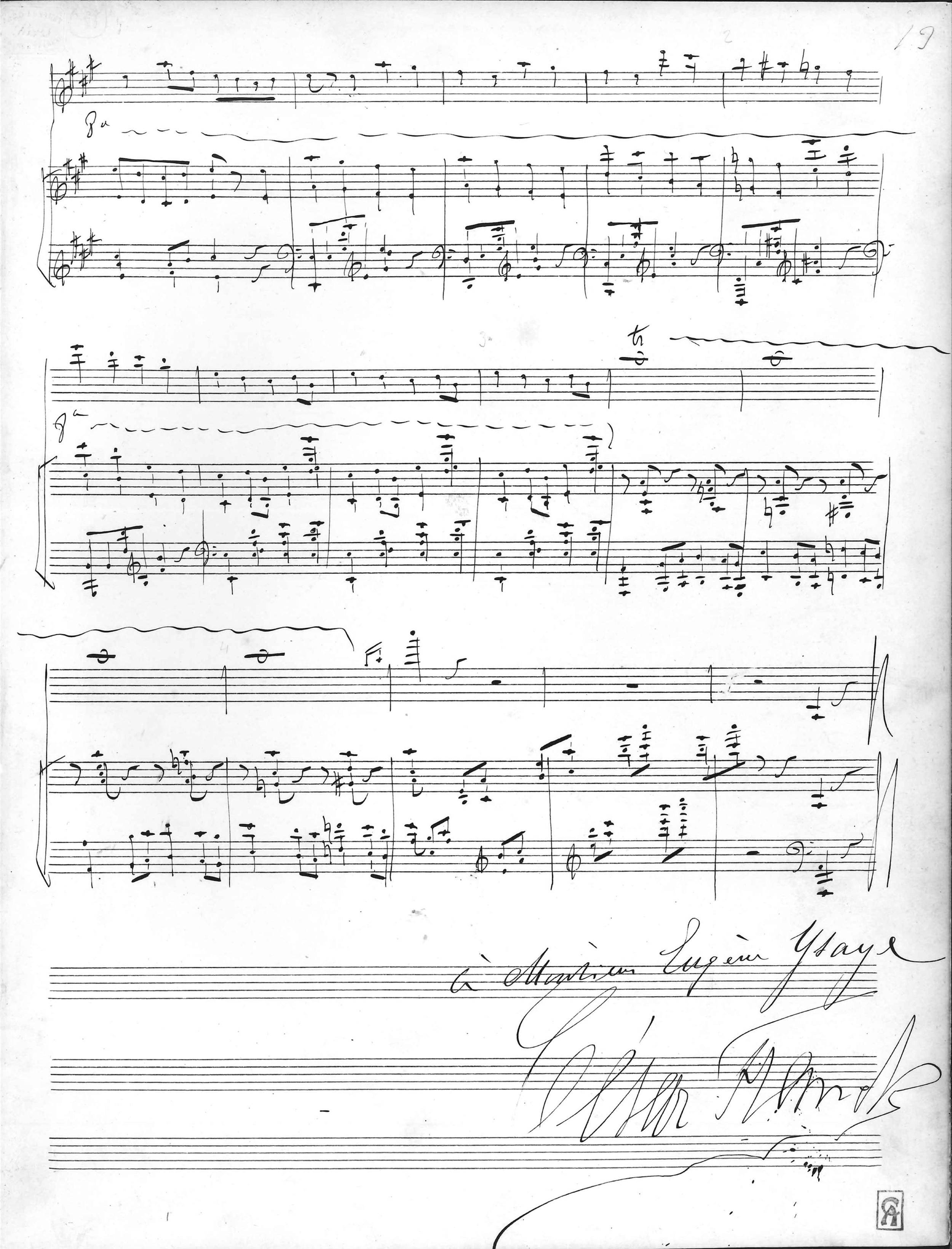 This high estimation of the autograph – even though it did not serve as engraver’s model – is all the more understandable if, on the one hand, it is a complete fair copy, and if in 1975, on the other, fundamental researches on Franck were still to be expected. There were neither specific studies on the creative process, a reliable works’ catalogue nor a printed edition of the letters. In short, information about the violin sonata’s genesis and publication was no more than fragmentary. The preface and the comments accordingly turned out to be brief, limited to several crucial passages where writing errors in the autograph were surmised. 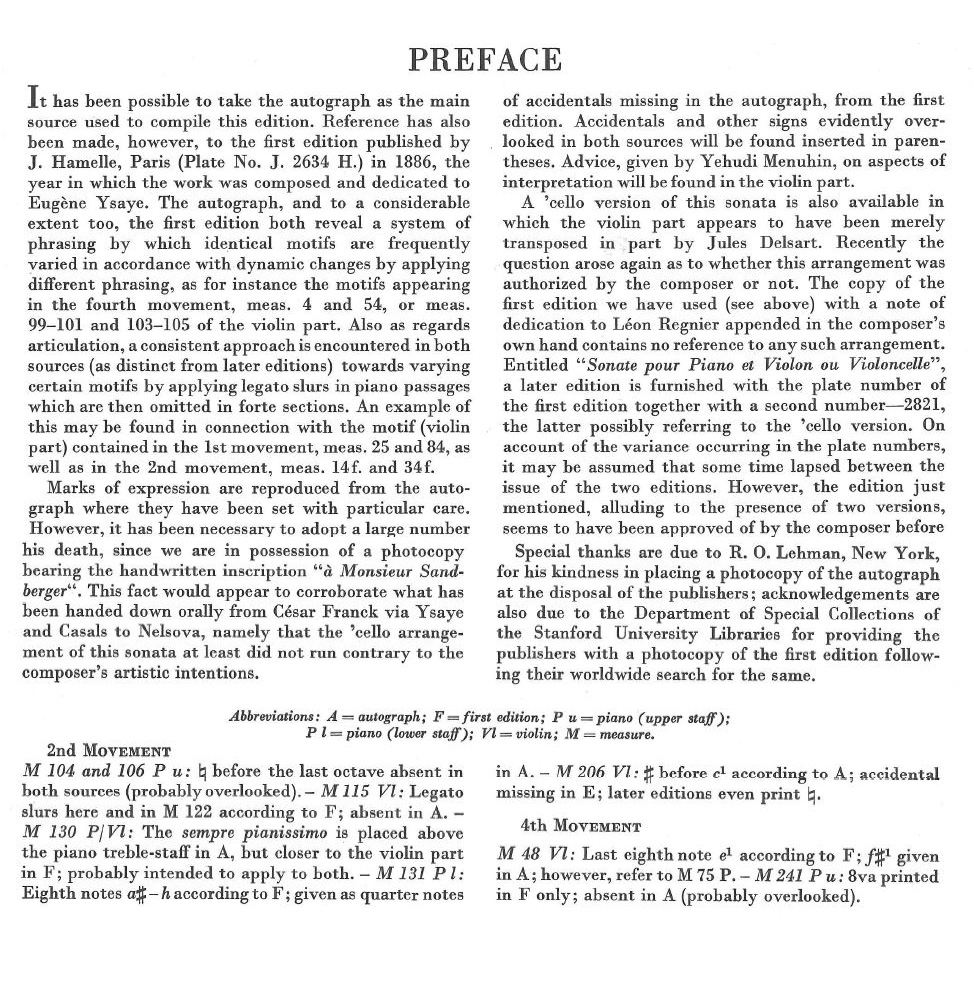 In issue F appearing in 1993, the editor decided to revise the edition, already announcing it on the inside title page as a “new, updated edition”. Offered as the reason for this was – as stated in the preface – “a holograph working manuscript that has only recently been made available to scholars” (formerly of the Wertitsch collection, presently in private possession). The expanded source basis brought about not only revised and added comments but also several changes in the music text. So, added in measure 22 of the third movement “Recitativo-Fantasia”, is the return to the opening tempo, a tempo Moderato, included only in this working manuscript; but referred to at the same time in a footnote at the start of this movement are markings showing differences between the two autographs (Moderato) and the first edition (Ben moderato). 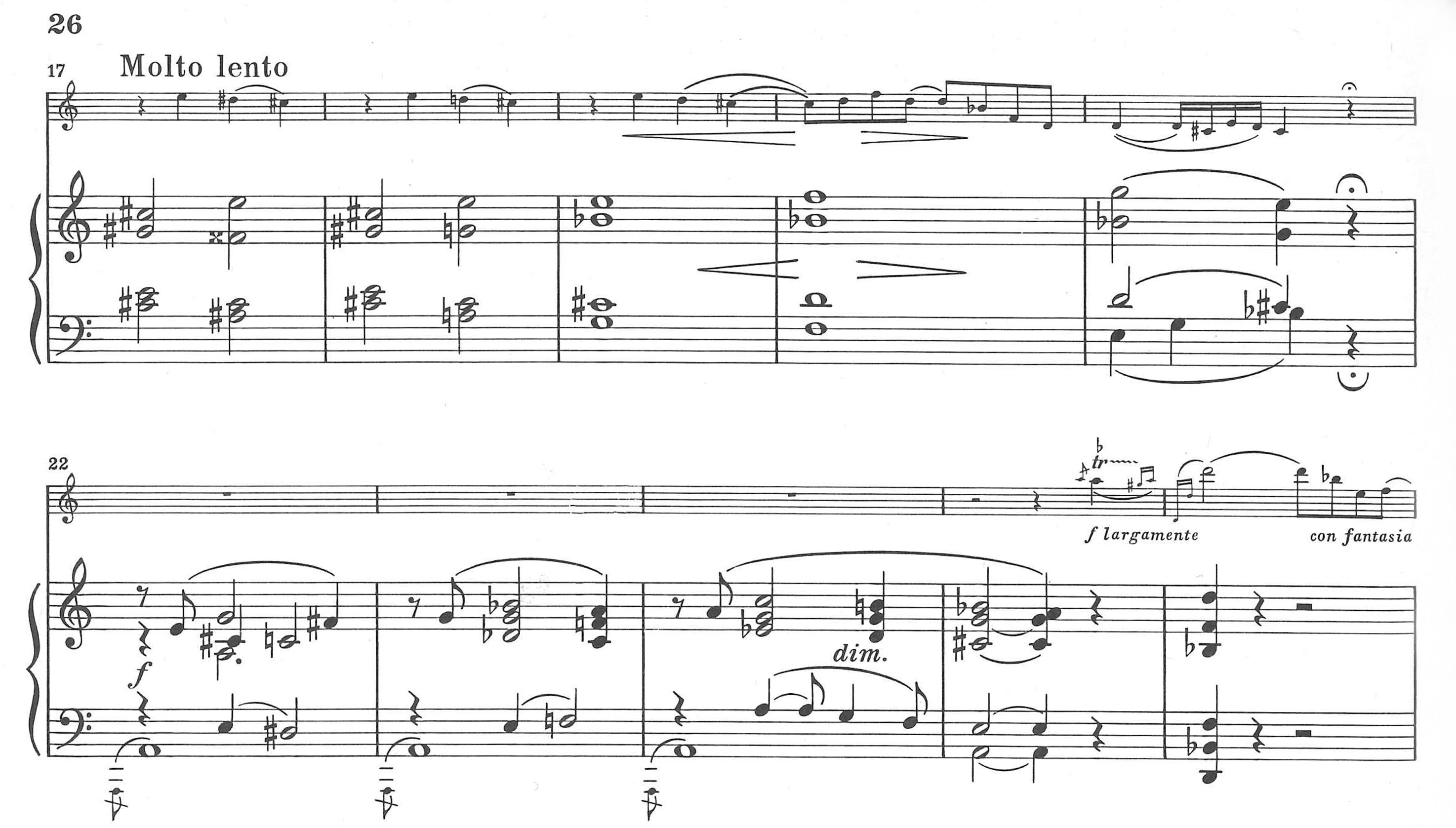 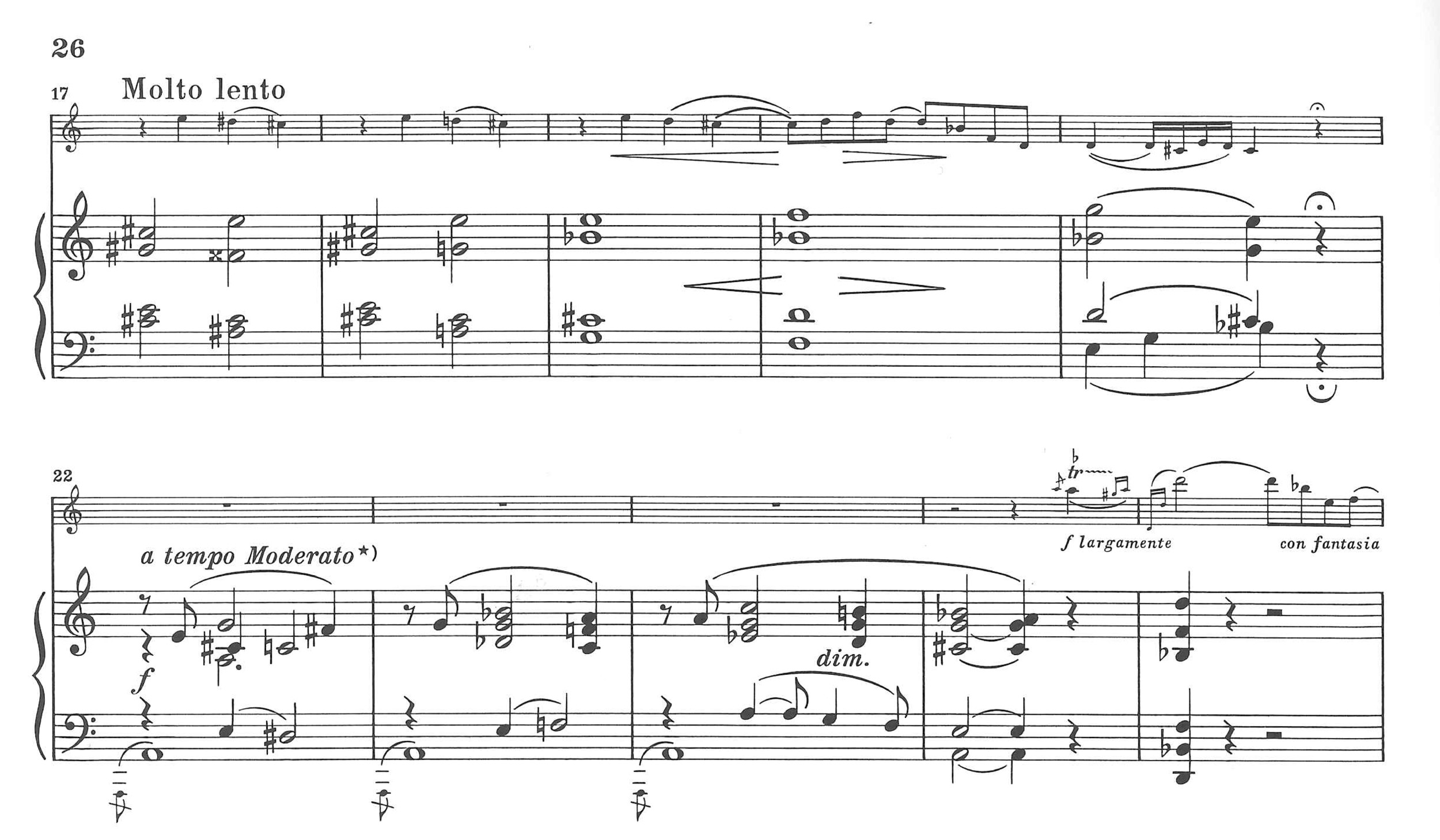 After protracted preparations two milestones in Franck research appeared in 1999, for which the French Franck specialist Joël-Marie Fauquet is responsible: a long awaited, detailed biography and the not less eagerly awaited edition of the complete extant correspondence . The abundance there of new findings has two main consequences for Franck’s sonata. On the one hand, it is clear from a letter of Franck’s first published there that the cello version by Jules Delsart, published shortly after the original version, was prepared with the composer’s consent, which therefore legitimated an Urtext edition of this version (HN 570). On the other hand, a letter to his publisher Julien Hamelle documents that the first edition of the original violin version must be given a different value than previously acknowledged. In this letter of 9 February 1887 Franck writes:

“I am sending the violin part of my sonata back to you. It’s not necessary to have another set of proofs. The small mistakes must be corrected carefully, then you can go to print.”

The score and solo part were evidently sent separately to the composer for proofreading, which explains the not inconsiderable differences between the separate violin part and the part given above the piano score in the first edition. Franck presumably had a violinist check the violin part, though without making sure that the subsequent changes and additions were adopted in the score’s violin part. Besides the dedicatee Eugène Ysaÿe, we must also consider for this checking Armand Parent who we know played through the working manuscript of the sonata that was completed on 15 September 1886. In any case, from the information in this letter there is no doubt that the composer positively authorised the first edition for printing – and indeed not only the score, but also the separate violin part, which differs the most from the autograph fair copy.

First of all, the verbal text is now considerably expanded to document much more precisely the newly accessible facts of composition and publication. In the music text itself, the difference is not so much about fewer wrong notes – here the earlier edition had already assumed that the first edition was more reliable concerning suspected mistakes in Franck’s manuscripts –, as it is about a wealth of detail giving in toto the edition a “new” face.

So, the two tempo changes in the first and third movements (in I: Allegretto moderato to Allegretto ben moderato, as well as already mentioned, in III: Moderato to Ben moderato), probably going back to the effect of the première on 16 December 1886, are now as a matter of course in the main text. Even more striking are the numerous additions for the violin part, especially regarding articulation and phrasing, such as, for example, at the end of the first movement:

Changing the main source also relativizes the hypothesis in the old edition based on the autograph source, that Franck pursued a principle of phrasing subject to the dynamics – various phrasing for the same motives in analogous places, those with slurring were more likely to be piano, or those without slurring, forte. It seems, on the contrary, as if in the no longer extant engraver’s model or in the likewise lost galley proofs the composer had tried to add slurs lacking in the manuscripts due to carelessness or to reconcile differences. That he was not consistent in the process and left a variety of phrasings, especially in the case of parallel passages, is another matter.

When in 1975 no other than Yehudi Menuhin (1916–99) took on the task of marking the violin part for HN 293, he did this based on the edition oriented in turn on the autograph. He added a series of slurs instinctively, so to speak, hence taking a step towards the perfectly justified higher evaluation of the first edition, as revealed later. In order to close the remaining gaps resulting from the edition’s modified concept, we were able to get Menuhin’s master pupil Daniel Hope to do the revision; Hope was able to study the Franck sonata with his teacher over several years and could therefore, like no one else, make the necessary adaptations. What’s more, alternative markings in italics are now also appearing below the accolades in the edition. They meet Menuhin’s characteristic approach to shaping certain passages in various ways, such as the following example from the close of the third movement shows:

So, look forward now to a revised edition that is truly state of the art!