Posted on December 12, 2016 by Wolf-Dieter Seiffert 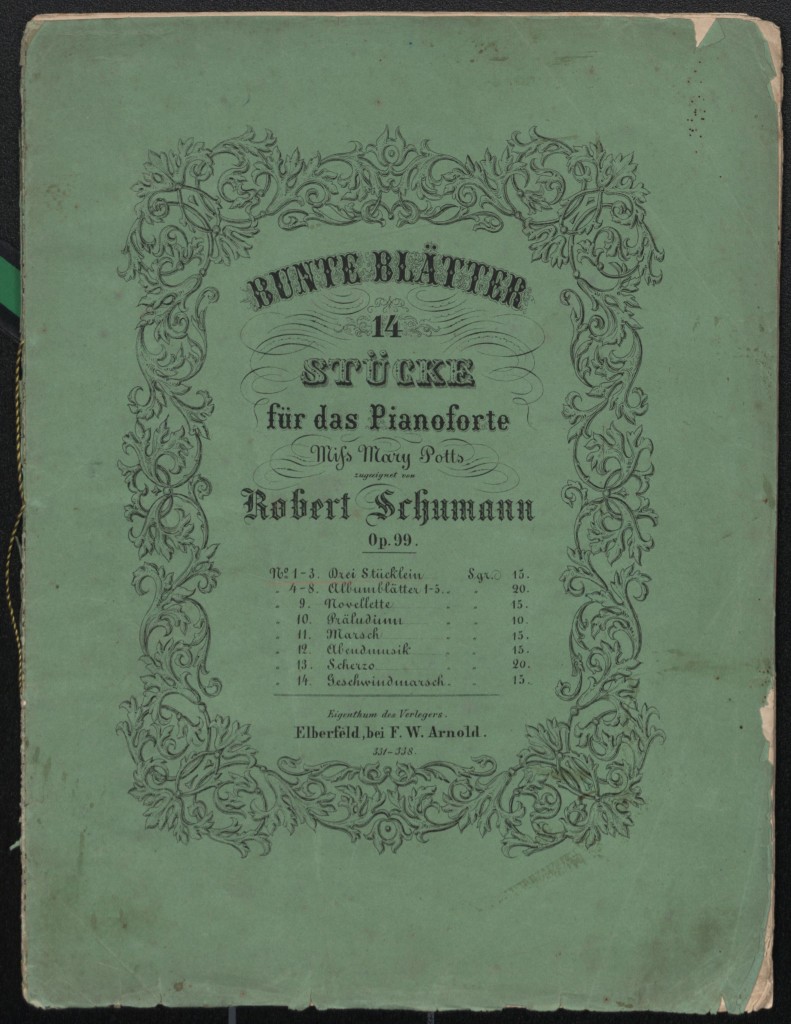 I’m especially taken by O N E of the “leaves” from opus 99. It’s the fourth one, in f-sharp minor (“fairly slow”). And I want to take a close look at it with you. Its simplicity and touching melancholy make it especially attractive to me. And others share my sentiments; Clara Schumann and Johannes Brahms felt the same way. Both wrote lengthy variations on just this piece:

Both cycles of variations, by the way, were published at the same time, in November 1854. At a time when Robert Schumann had already spent eight months as a patient in the private hospital of Dr Richarz in Endenich.

The piece in f-sharp minor (entitled “Album Leaf”, because it presents the first of five “Album Leaves” for opus 99) is only a short page of music, and not even all that difficult to play (on the Henle scale of difficulty ranging from 1–9, it ranks at level “4”, making it the easiest piece of opus 99). Here is a recording of Dénes Várjon:

At first glance you might feel inclined to think the piece is a chorale, the melody of the soprano voice is church-like, sustained indeed almost monotonously, and subjected to the style of a four-part chorale. I am convinced that similar songs could be discovered in a Christian hymnal. But it is not a hymn, it was newly created by Schumann “in the old style”.

The chorale idiom, together with the very simple formal structure appears “antiquated” to us, like a quotation from an earlier time, long ago. And that is seemingly not enough. In the first “album leaf” Schumann makes further use of the gesture of the (baroque) gavotte. This usually rapid dance, frozen here as in slow motion, is characterized in particular by the metric short-short-long. I would say “Der Dichter spricht” (the last piece of the “Kinderszenen” op. 15) is related to our album leaf in this respect. Don’t you think so, too?

Perhaps, incidentally, the gavotte “idiom” was the main thing that prompted Clara Schumann, and especially Johannes Brahms to use exactly this album leaf as an inspiration for variations; for already during Bach’s time a gavotte was a popular model for variations, and we also know that Brahms very much favoured variations on old music forms.

I mentioned above that the album leaf in f-sharp minor appeals to me especially in its melancholy. It seems to me that the reason is just Schumann’s recourse to the old form of the gavotte and chorale. But the decisive element, what is really so intriguing about this piece, is the way it combines the old with the completely novel. And what is novel is the harmony. What Schumann does is to consistently repeat the melody of part A almost like a formula, and combine it with ever-changing chords in the underlying (harmonic) structure. The effect is astonishing, because it proceeds to vary the illumination of the simple melody to create ever changing “colours”: In the first four-measure unit we remain in f-sharp minor, the next four measures take us from f-sharp minor to A major, and the following four-measure unit (= mm. 17-20) leads us from diminished seventh chord by way of a# to cadence in A major, only to return again in the end to the f-sharp minor of the first four-measure unit. And, always with the same four-measure melody above it. Astonishing, isn’t it?

And then there are the seventh and ninth chords, always on the stressed measures 2, 6, 18 and 22. Try it out on your piano; play the first four measures and pay special attention to the effect of measure two, first beat. You will suddenly feel the pleasantly sharp dissonance of the chord in the pacing symmetry of the gavotte. You must allow yourself the enjoyment of this harmonic spice, so to speak – and you will see how the little piece develops breadth and depth. For, it is exactly this chord that is the repeated little climax in the inner development of the movement: for this short instant motion halts on the dotted c#2 – in the bass voice we hear a d (major seventh) or a b (major ninth) – actually, the sharpest of disharmonies. It makes you hold your breath. The “wrong” bass tone deeply enriches the traditional four-part chorale passage. For all the other voices in the chord progress normally and according to our logical musical expectations. This is how in these passages Schumann creates four-part chords, inconceivable in the baroque or classical period, because it simply won’t do. I find it is these four-part chords (triads with major sevenths or major ninths) that really make the piece exciting. They actually become autonomous; they have their own sound value, and on top of that are always positioned in the metrically-stressed centre of the sequence of measures. And in my opinion these seventh or ninth chords are what, along with the “antiquated” framework of the chorale-like gavotte, create the melancholy mood. They gently colour the “pure” triad by very impressively incorporating a fourth, an actually disruptive note. Even if you don’t not agree with me that the mood is melancholy, then surely, though, you will agree that the colouring of the triad in f-sharp minor with the added bass d or b is about “coloured leaves” in a figurative sense, that is, in the sense of being “chromatic” and thus having to do with colour. Incidentally, if you were to analyse this dissonant chord with the usual tools of “harmonic theory”, you would most certainly be confronted with terms like “false conclusion” or “mediant”, “suspended note” or “VI. degree”. All of which undoubtedly applies, but has nothing in the least to do with the true effect (!) of our piece. Don’t you agree?

To conclude, the diminished chord in measure 17 that has its resolution in the coloured f-sharp minor chord in measure 18 deserves to be mentioned. This diminished chord (m. 17) is the only one in the entire piece that Schumann explicitly marks with a sustaining pedal sign. And not only in order to incorporate the a# grace note in the chord sound of the left hand (the chord could not be reached without the pedal), but also to create an audible contrast for the celestial, diminished sound with the help of the pedal. Because, if you do not listen very closely, you will not notice that this is exactly where the repetition of part A starts. The diminished chord again conceals and adds colour to the rather simple melody.

These colourings are what make the little album leaf from opus 99 so appealing. And it fits in so beautifully with the slightly melancholy autumn mood that we should abandon ourselves to with Schumann, when we are playing or listen to the piece.