Posted on January 30, 2017 by Annette Oppermann

After nearly three decades the time was ripe for a new complete edition at Henle –and so in 2016, Beethoven, Haydn and Brahms have welcomed in Béla Bartók a new addition. In an earlier blog when the Urtext edition of Bartók’s Allegro barbaro (HN 1400) was released, we already took “a peek through the keyhole” at the complete edition that we are publishing in collaboration with Editio Musica Budapest. But the door has now opened: A few weeks ago, For Children (HN 6200), the first volume of the Béla Bartók Complete Critical Edition appeared, which we now want to examine more closely with László Vikárius, editor of the volume and director of the complete edition.

AO: Mr Vikárius, may we start with something slightly provocative: Why does the world need a Bartók complete edition?

LV: In the Henle blog you probably don’t need to emphasize what a complete edition means in general for a composer. For Bartók in particular, however, it is important for several reasons:  First of all, there are the “classic” text problems of a 20th-century composer whose works have appeared in different editions in different countries. They are much better off in a complete edition than in a practical edition, for here with footnotes, appendices and critical reports we have many opportunities of optimally presenting the musician with variants. Bartók is, furthermore, a special case because his own recordings of piano works contain important new variants (sometimes, of whole formal sections!) that can then be transcribed and taken into account in the complete edition.

May I also add that perhaps more than for any other composer it would be fitting for Bartók to have his works edited finally in a scholarly, that is, an historico-critical manner? After all, he himself did a tremendous scholarly and editorial work in his folk-music research. He not only really collected Hungarian, Slovakian and Arabic folk music, but also transcribed and documented it in great detail, listed variants, established cross links and classified types. His many volumes of this music’s editions are also critical editions of his own collections.

AO:  Such an “historico-critical”, i.e., scholarly edition documenting the entire compositional process is therefore the goal. For a composer who lived first in Hungary and later in the United States, then died as recently as 1945, this is very much more difficult to achieve, though, than for Beethoven or Brahms – which is why the project so long in the planning had not yet been realized.

LV: Yes, László Somfai, who had a lot of experience with the critical edition of classical music, had already been planning a complete edition for decades. But the inaccessibility, in part, of sources in two different collections (in Hungary and the USA), together with copyright problems made implementing this impossible. The source situation changed at the end of the 1980s: At that time, Péter Bartók generously made all the manuscript compositions in his possession available to the Bartók Archives, so that we also finally had access to all the sources of the so-called American estate.

AO: So, you mention the Bartók Archives – What is so special about this Budapest institution?

LV: Founded in 1961, the Bartók Archives, can be regarded as the central research centre for Bartók: Preserved here is the Hungarian Bartók estate – formerly in the possession of Béla Bartók, Jr., now belonging to his successor Gábor Vásárhelyi; besides housing the estate, the archives has collected many other sources over the years. We are working in close contact with the Paul Sacher Stiftung (where Péter Bartók’s manuscripts have meanwhile been deposited) and the Belgian Bartók Archives (where the estate of Denijs Dille, formerly director of the Budapest Bartók Archives, is to be found) at the Royal Library in Brussels. This gives us the optimal foundation for work on the complete edition.

AO: And how is the work on such a complete edition actually organized?

LV: We do, of course, have an editorial board on which, with László Somfai, Márton Kerékfy and myself, three generations, so to speak, are sitting. Fortunately, we can discuss everything in detail with Mr Somfai who has spent decades preparing for this. My younger colleague Márton Kerékfy is best qualified to redact the complete edition, thanks to his experience as co-worker in the Bartók Archives as well as editor-in-chief in the Editio Musica Budapest publishing house.

We have also appointed a scholarly advisory board of internationally renowned researchers from Germany, France, England, Australia, the United States and Hungary. It was important to us that not only well-known Bartók scholars (such as Malcom Gillies, Klára Moricz or Tibor Tallián) be involved, but also that other 20th-century composers (such as Stravinsky by way of Richard Taruskin or Debussy through Denis Herlin) be represented. This exchange of experience has already proved to be very valuable for concrete work on the edition. Wolf-Dieter Seiffert, who has done so much to realize the complete edition and is also on the advisory council, needs no introduction here.

AO: A special feature of Bartók’s oeuvre is his work with folk-music models. How is this actually reflected in the complete edition?

Bartók's transcription of a folk song. Click to enlarge.

LV: For every work the identifiable folk-music models are explored and presented. They often derive from Bartók’s own collections and are extant in a number of sources – transcriptions, phonograph recordings or editions. It is only on the basis of these sources that Bartók’s understanding of folklore and the role of folk music in his works can be comprehended.

AO: Doesn’t that also apply directly to For Children, the recently published volume of the complete edition?

LV: Yes, folk music plays an essential role in For Children, and so it comes as little surprise that we have presented the Hungarian and Slovakian lied models with multilingual texts in an appendix. Here the support of my co-editor Vera Lampert, author of the seminal catalogue of Bartók’s folk-song arrangements (HN 2617) was of course very helpful. 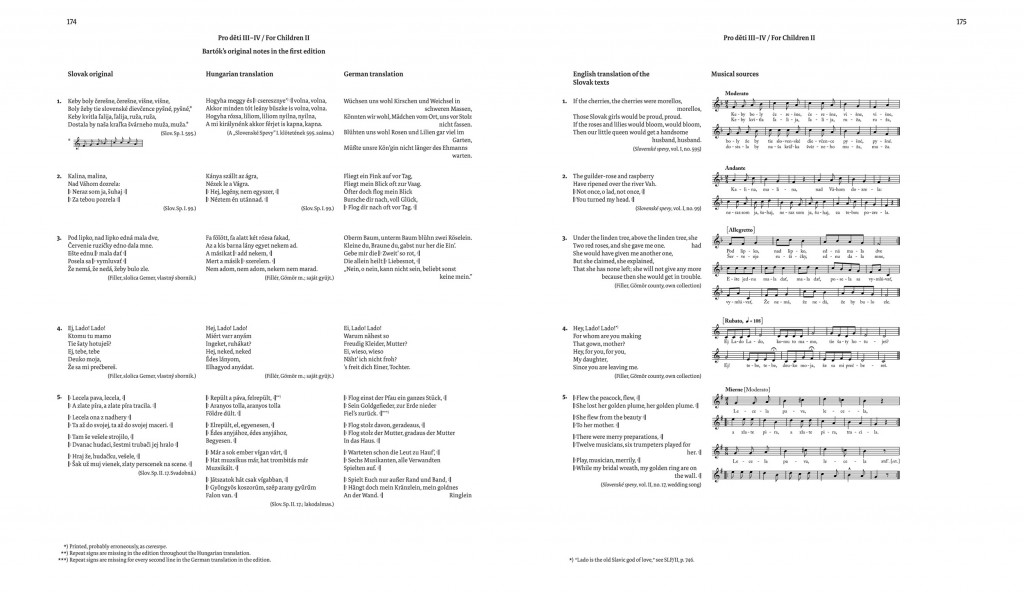 Appendix (excerpt) of the complete edition. Click to enlarge.

Very interesting is the fact that For Children exists in two versions, one of which came into being at the beginning of Bartók’s compositional career (1908–1911), the other one in his last years (1943). For a direct comparison, we present as an exception these two versions synoptically. The differences are sometimes only small (but important) harmonic nuances, sometimes also specific notation questions. In 1908, that is, Bartók changed his notation practice due to avant-garde ideas that were downright revolutionary. So, for a few years, he fundamentally gave up key signatures in order to approach tonality more freely, which he then however introduced still later in revising these pieces – albeit somewhat unusually so at times, meticulously considering the modal scale of the melodies. 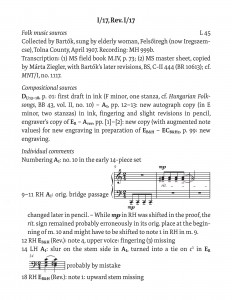 Critical Notes (excerpt) of the complete edition. Click to enlarge.

AO: What for you was special in the work on this first volume?

LV:  The intensive study of this fantastically versatile set in different versions: First of all, the origin of the two versions had to be carefully reconstructed based on the prints and manuscript sources, but then the two versions had to be carefully kept apart again in the edition. Exploring the early layers of historical development and the sometimes very subtle differences between the versions is, of course, particularly exciting for every Bartók researcher. 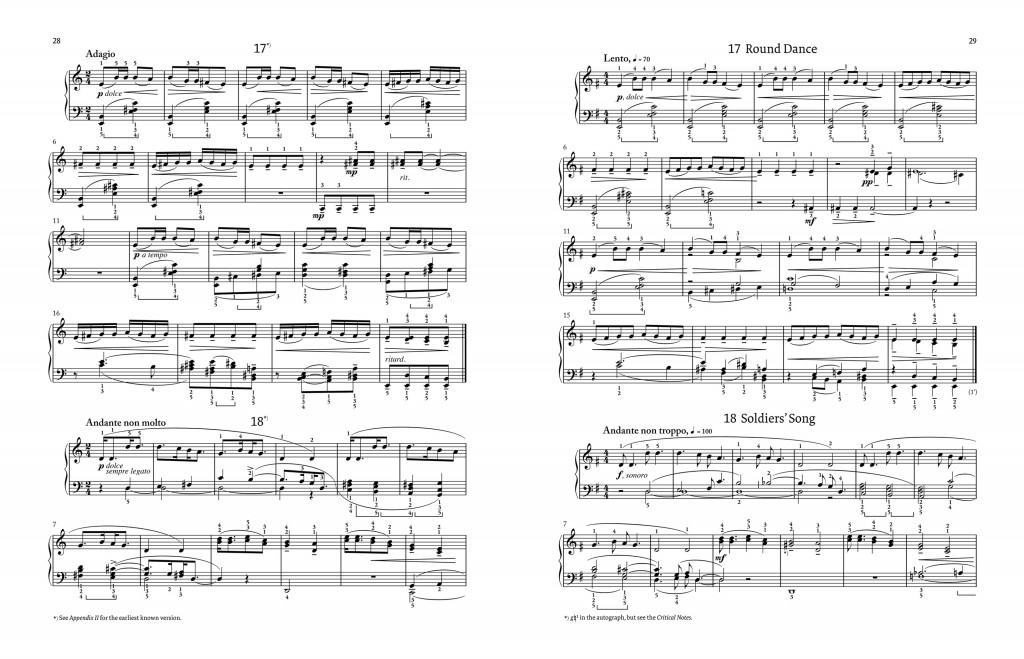 Early version and revised version in the complete edition. Click to enlarge.

AO: So, For Children is an exciting edition project, but it is perhaps not exactly the most famous of Bartók’s works. Why did you open the complete edition with this?

LV: A complete edition is indeed a long-term enterprise, and many different volumes already underway include works such as Mikrokosmos or Concerto for Orchestra. However, last year when we had to decide, For Children seemed particularly appropriate for the first edition of the Bartók complete edition. First of all, these small pieces are composed masterfully and extremely economically, show Bartók’s individual style right at its origin around 1908 and its first development up to 1911, so considered chronologically, they also make a good introduction to the complete edition. The fact that each piece is at the same time a folk-song arrangement also familiarizes the user with Bartók’s very own source, folklore. Finally, For Children, in two versions and with a highly complex source situation, offers a perfect example of the questions of the Bartók edition, testing the methods of systematizing sources and presenting them in the Critical Report. It is also exciting that you can study not only how individual pieces are developed, but also how the whole collection is created – highly planned both musically as well as pedagogically. 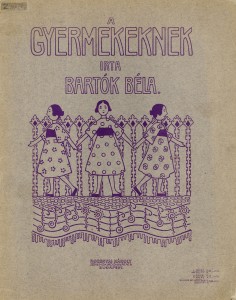 Cover of the first edition.

For Children is Bartók’s first major attempt to write children’s pieces and to contribute to the pedagogical literature where experiences with both folk music as well as the latest contemporary compositional ideas are influential. However, the set was not just instrumentally or musico-pedagogically intended. With the decisive turn to the culture of the peasants, a suppressed social class, and even also to the popular culture of the then minorities of Hungary, the enterprise also gained a general social pedagogical meaning, which is still perceptible in the pieces. The freshness of the melodies and rhythms and the originality of the workmanship come from this revolutionary gesture. What is more, in Hungary For Children continues to have an impact not only on piano lessons, but also on composition studies. The volumes are used at the Budapest Music Academy as a specimen collection for the treatment of unusual elements of folk music.

AO: There are really many reasons to open the complete edition with For Children and thus also with a new view of Bartók. I thank you very warmly for this exciting introduction. Last but not least, the compelling question: What can we look forward to in the coming years?

LV: Next to appear is Bartók’s Concerto for Orchestra (including a transcription of all the sketches), while volumes of piano music from 1914–1920, the Mikrokosmos and the six string quartets are in preparation. Perhaps worth mentioning is a whole volume of choral music that will, we hope, make Bartók known outside Hungary as a major choral composer.