Leoš Janáček’s magnificent chamber music that we’re publishing in collaboration with the Wiener Universal Edition has for some years now already enhanced our catalogue with the wind sextet Mládi (HN 1093) and the witty March of the Bluebirds for piccolo and piano (HN 1143). But pianists can also look forward now to Janáček in the best quality Urtext, for meanwhile the four-part piano cycle In the Mists (HN 1247) has appeared. Here again philological thoroughness involved a lot of effort on the part of our Janáček specialist Jiří Zahrádka, for the work is extant not only in a number of autograph manuscripts, together with two, in part, heavily reworked copies, but miscellaneous printed editions exist as well. 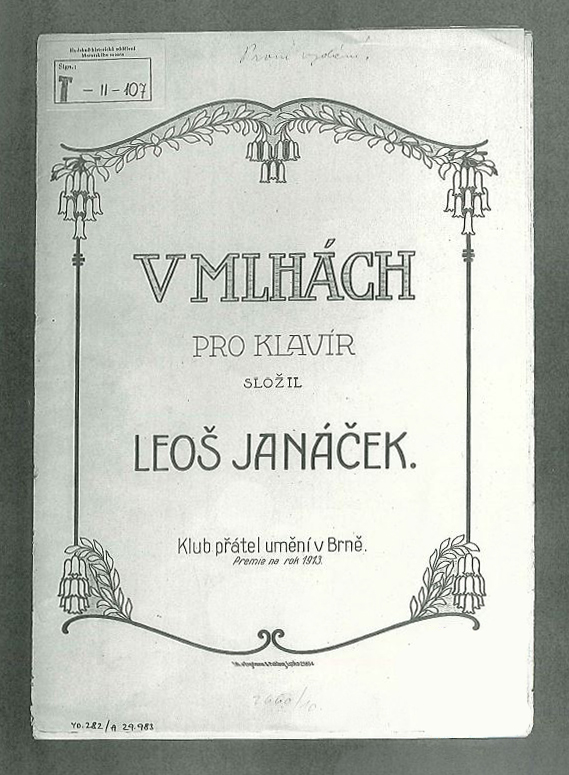 In 1912 Janáček successfully took part in the composition competition of the Brno Club of the Friends of Art with, namely, the piano cycle, then still headed simply “Mlhy” (thus “Mist”). After that, the work did, in fact, appear in print in 1913 as the club’s annual bonus gift (now with the presently well-known title “V mlhách”, thus “In the Mists”), but was not at all widely distributed. It was not until a full decade later, in 1924, that the work’s publication in a revised edition by Janáček’s Prague publishing house Hudební matice paved the way for a broader public.

Interestingly enough, this revision was not initiated by the composer himself, but by the pianist and pedagogue Václav Štépan, who had repeatedly performed the cycle and intensively exchanged views about it with Janáček. In November 1923 he sent the composer his revision, entered presumably in a copy of the first edition, with the assurance that he had “acted with the utmost respect towards every single note”, and had generally limited himself to “making your ideas as clear as possible for all pianists, especially for those less self-reliant”. The only major intervention concerned the passage with the descending 32nd-runs in No. 4 (mm. 117–124), which Štépan had changed at Janáček’s explicit request (see below). The revision was fully approved by the composer, who promptly responded: “Highly esteemed Herr Doctor! Thank you warmly for the revision. You ought to be mentioned on the title page.” And so that occurred: 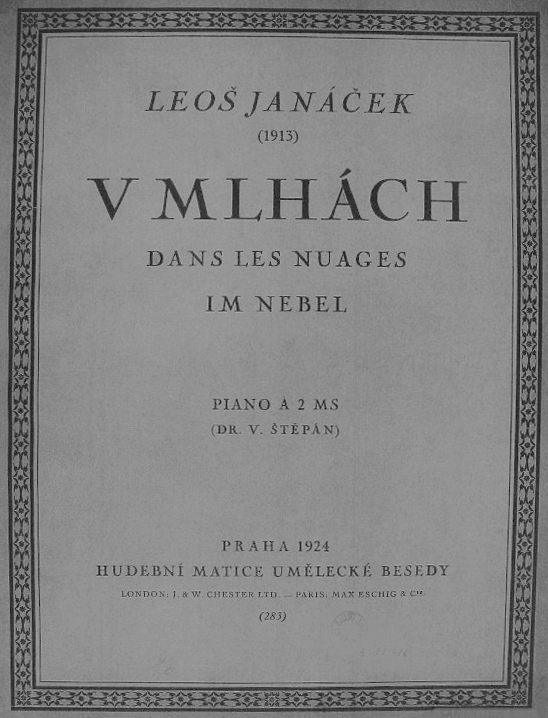 The source that Štépan and Janáček exchanged is unfortunately no longer extant, but comparison of the two printed editions shows that the revision was in fact essentially limited to performance-related details such as dynamics and pedal as well as rhythmically precise notation of seemingly improvised figures. It could therefore also have been easily executed in the engraving plates of the predecessor edition. A new plate had to be engraved only for page 16, for the above-mentioned passage in No. 4: 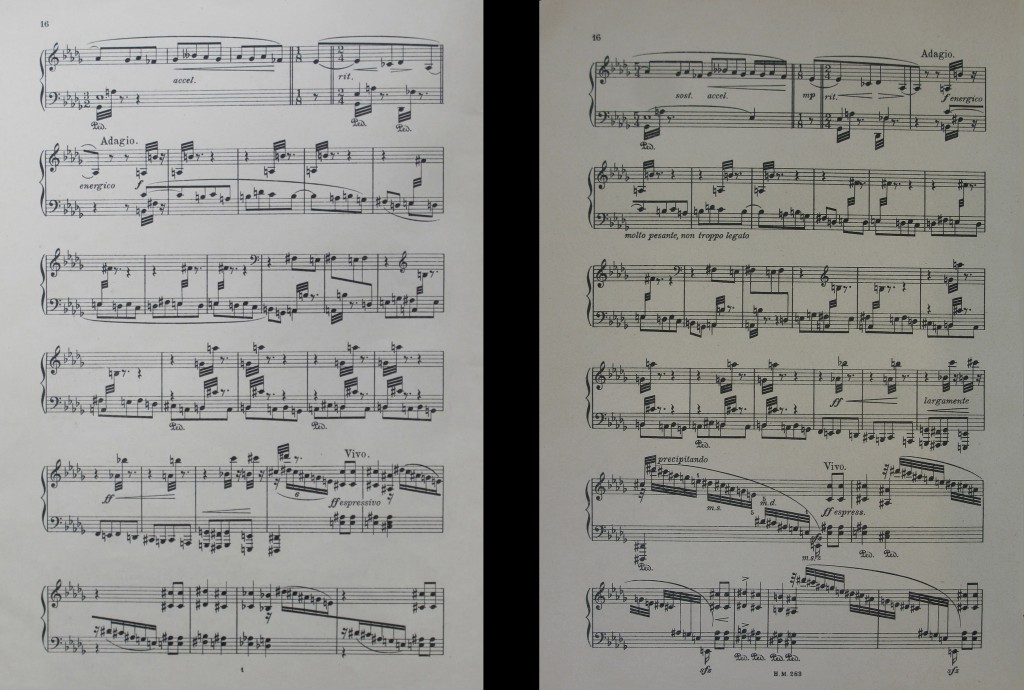 The carefully revised edition of 1924, optimised “for all pianists”, documents without doubt the definitive, authorised version and is, therefore, very clearly our edition’s main source. So then, where’s the problem? It is simply that this source also raises questions. And this is not about the length of a decrescendo hairpin to the exact millimetre or “stroke or dot” for staccato, but, for example, about questioning fundamentally whether and how in piece No. 3 the second section is to be repeated. 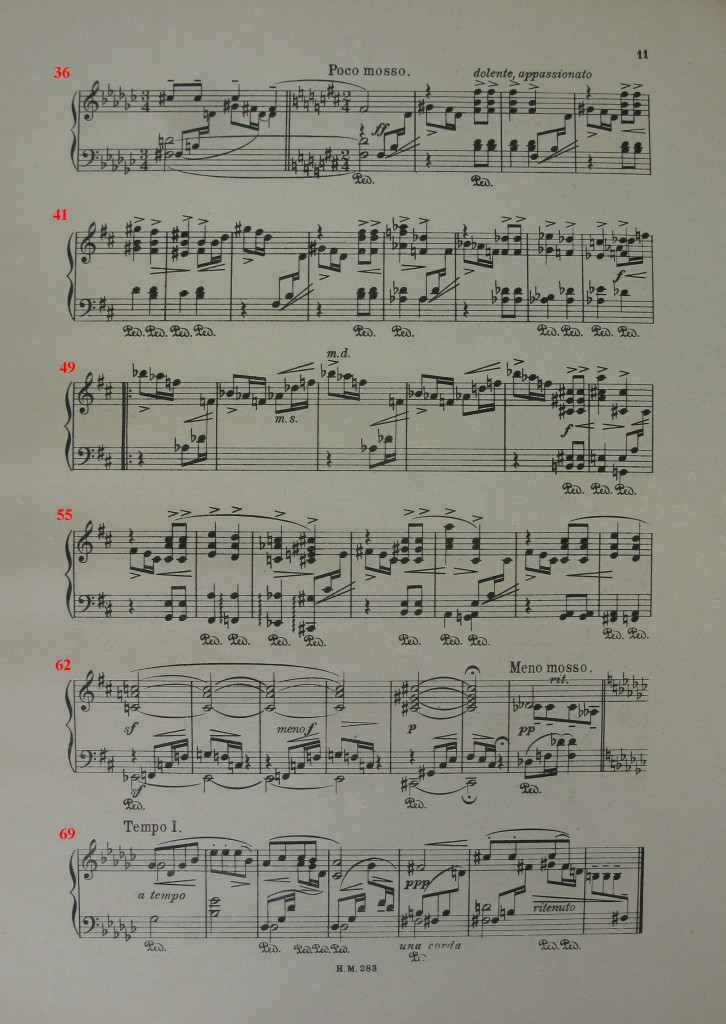 Here, that is, in both printed editions at the start of the 3rd line, before m. 49, is to be found a highly surprising repeat sign, lacking its counterpart, the closing sign. This could, of course, mean that the piece is to be played to the end and then repeated from m. 49. But take a closer look: Heard repeatedly in mm. 48/49 is the characteristic accompanying figure:

Re-inserting with the second half of the figure on the first beat of m. 49 after the closing measure is thus musically inconceivable (and the same also goes for the fermata measure 67, theoretically inviting a new start). So, the printed music text makes no sense. And so, resourceful editors have always tried to make sense of this place in a different way by starting the repetition as early as from m. 37, so that the whole second section is heard twice, or the repeat from m. 49 introducing at least the first half of the accompanying figure.

Both seem to be a musically meaningful solution to the problem – and the first variant with the complete repeat from m. 37 is so widespread that I too have known the piece just so for years! But it certainly does not explain how such a repeat sign came to be wrongly positioned in m. 49. This can only be settled by consulting the above-mentioned earlier copies where this section has repeatedly been changed. Initially, this second section was in fact considerably shorter (25 instead of 32 measures) and was repeated for this reason; in addition, it began triple pianissimo and – last but not least – it still lacked the accompanying figure mentioned. 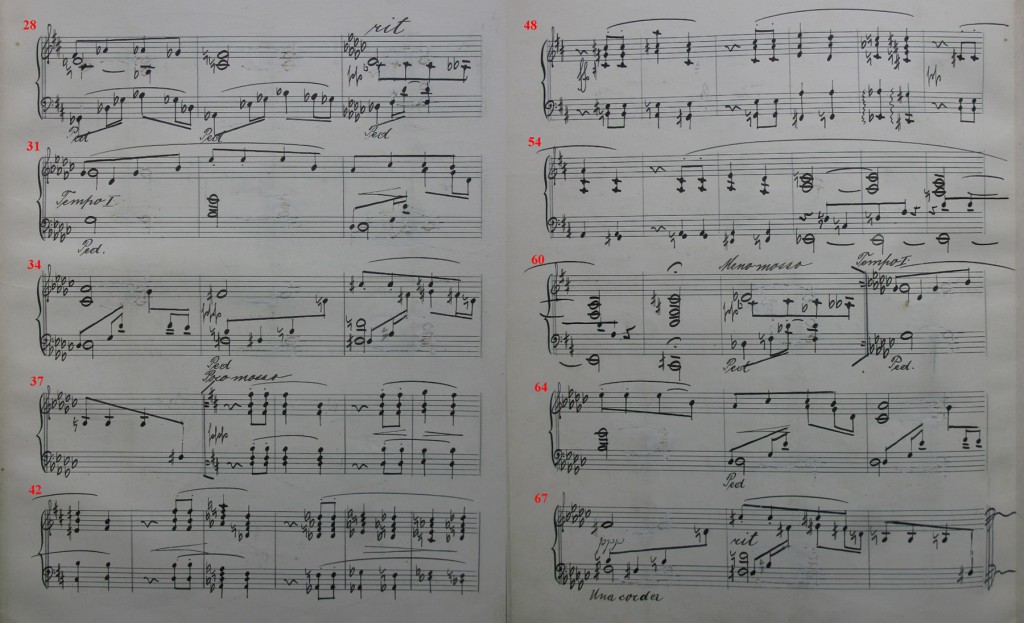 In copy 2, evidently copied initially line-for-line alike, just these measures were repeatedly revised, first through erasure, then with a paste-over for the first measures of the Poco mosso, enlarging the writing space by an accolade (to 6 instead of the previous 5). This was necessary because the accompanying figure now meanders through the fortissimo chords, requiring the insertion of several measures. But the paste-over was also repeatedly erased and corrected, making measures 37 to 52 very hard to read. 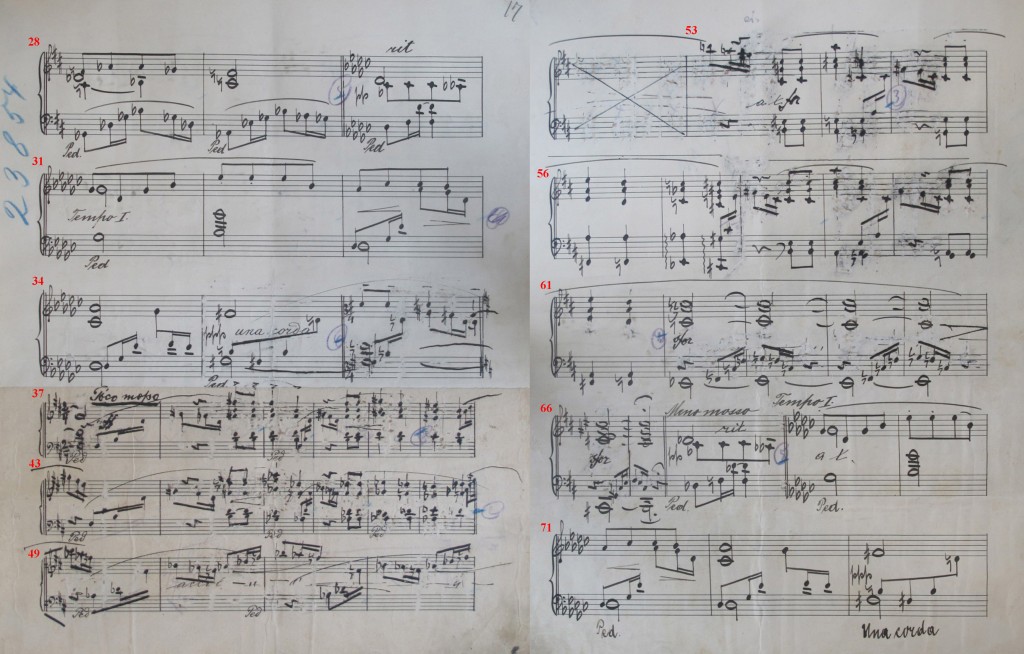 We can recognise, however, that there is no normal bar line at the end of the penultimate accolade, after m. 48, but a double bar line marking the end of a section. In this context, the repeat sign before m. 49, only too familiar to us, is logical, notated at the start of the next line with two slashes. And we can recognise on the next page that the closing repeat sign was erased at the double bar line before the Tempo I.

The measures notated between the signs should therefore be repeated for a start. In the course of the revision this repetition was evidently deleted – but the sign relatively inconspicuously placed at the beginning of the line before m. 49 inadvertently remained in the process (likewise the double bar line after m. 48, no longer meaningful at the latest after the entry of the accompanying figure). So that’s how it found its way into the prints where it aptly stands inadvertently at the beginning of the line and so even escaped the scrutinising eye of Štépan who was doing the revision.

Following this explanation, the only logical consequence is that the repeat sign in m. 49 is to be deleted and No. 3 in the definitive, authorised version is to be played without any repeat of the second section. This is also just how we already find it in a later issue of the revised edition, published in 1938. Since, however, Janáček had already been dead for a decade, and the issue also contains other, certainly unauthorised interventions in the music text, it is not reliable as a source. Our Urtext edition nevertheless strikes the repeat sign for the reasons given – but obviously identifies this intervention and provides an explanation at the appropriate place for all who “miss” a repetition here.

2 Responses to »Small error, large impact! About a repeat sign wandering around “In the Mists”«