It’s so much easier to say “The Tempest”, “Pathétique” and “À Thérèse” and we can make ourselves understood so much faster than if we reel off a series of numbers – Sonata no. 17 in d minor op. 31 no. 2, or Sonata no. 8 in c minor op. 13 or Sonata no. 24 in F sharp major op. 78. But the question is how authentic are these well-known epithets? And aren’t they sometimes perhaps misleading? A brief round-up in two parts.

Let’s have a look through Beethoven’s 32 piano sonatas, plus the three early “Kurfürstensonaten” (Electoral Sonatas). In the first part of this blog we’ll start with the epithets that were beyond any doubt or in all likelihood given by the composer himself.

Pathétique op. 13: If only it were always this easy! This name can be traced back to the original edition of the sonata as published by Hoffmeister in Vienna in autumn 1799: “Grande Sonate pathétique”. Beethoven most certainly approved it (even if we do not have any handwritten evidence to this end) because he supervised publication in Vienna. With its passion, its inner turmoil but also its characteristic representation of the dramatic elevation this masterpiece lives up to its epithet in every sense.

Funeral March Sonata op. 26: Even though Beethoven only gave the entire sonata the title “Gran Sonata”, the supplement for the 3rd movement of the sonata “Marcia funebre sulla morte d’un Eroe” (Funeral march on the death of a hero) that was included in the original edition of 1802 would not have been published without his approval. Thirteen years later, he made an orchestral setting of this movement for the incidental music to the play “Eleonore Prohaska”, noting down the title “Funeral march” in the manuscript. 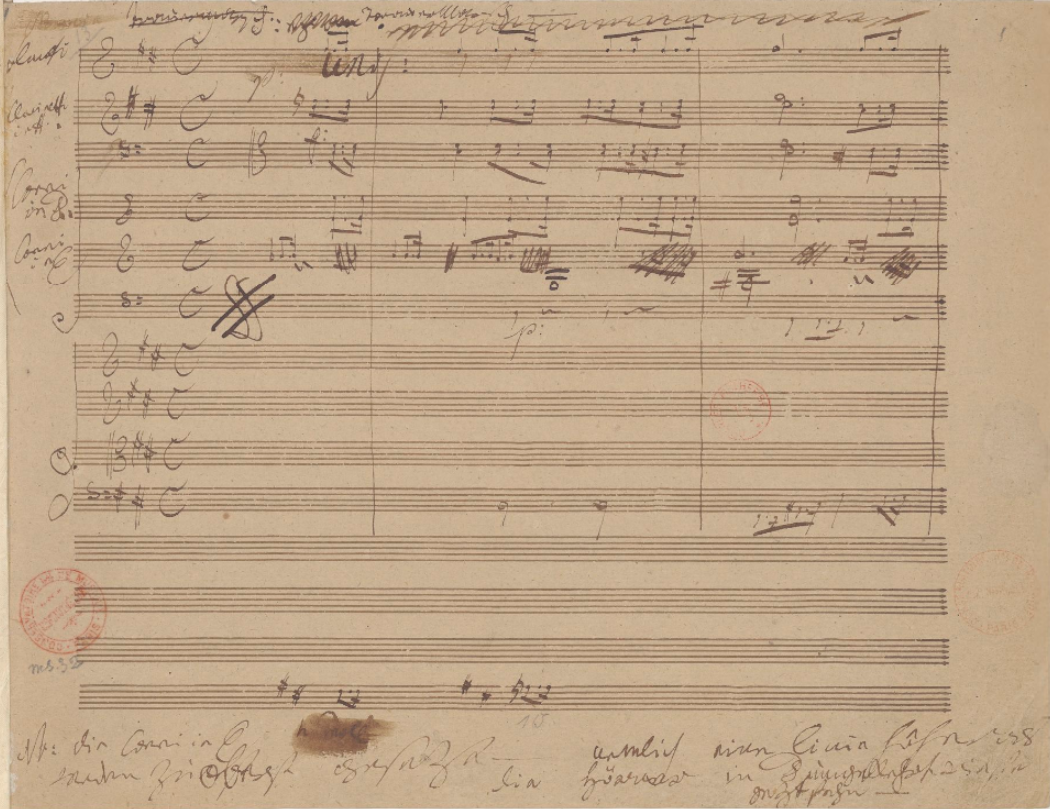 Les Adieux op. 81a: This is the first more challenging case. In October 1811 the publisher Breitkopf & Härtel sent Beethoven copies of the original edition with the German title: “Lebewohl, Abwesenheit und Wiedersehn. [Farewell, Absence and Return.] | Sonate für das Pianoforte” and the French title: “Les Adieux, l’Absence et le Retour | Sonate | Pour le Pianoforte”. It was “Les Adieux” of all things that Beethoven bitterly complained about, writing: “I have just received the Lebe wohl etc and I see that you really have other copies with a French title. Why so? “Lebewohl” is something quite different to “les Adieux”; the first is said from the heart to a single person, the other to a whole assembly, to whole cities” (letter of 9 October 1811).

The reason why this subtle difference in meaning was so important to Beethoven becomes clear upon examining the manuscripts. The sonata explicitly referred to events in the life of the dedicatee, the Archduke Rudolph. Movement I: “The Farewell | Vienna, on 4th May 1809 | on the departure of his Imperial Highness | the revered Archduke | Rudolph”, movements II and III: “Vienna 1810 on 30th January | written on the arrival | of his Imperial Highness the revered Archduke Rudolph”. The fact that today we refer to the sonata as “Les Adieux” would not have gone down well with the composer. (The whole issue is much more complex than I have been able to describe in this short space – it is worthy of its own blog entry!) 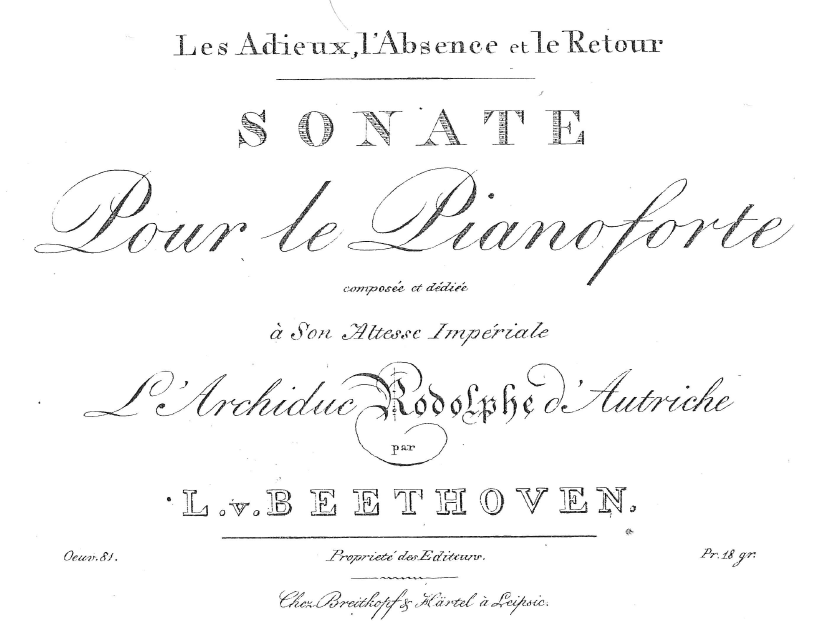 Original edition of Sonata op. 81a

Two easy sonatas op. 49 and Sonatina op. 79: That the titles “Sonatine” and “leichte Sonate” (easy sonata) were used in a very similar manner by Beethoven is shown by the sources: The original edition of the Sonatas op. 49 bears the title “Deux Sonates faciles”, the autograph of the first sonata, on the other hand, has the heading “Sonatine”. The Sonatine op. 79 also contains a variant regarding the title, the German original edition says “Sonatine”, whereas the English one (together with the Sonata op. 78) bears the title “Two Sonatas“, even Beethoven’s autograph has the simple title “Sonata”. Nevertheless the gradations “Sonataine” and “leichte Sonate” are without a doubt to be considered as being supplements provided by the composer himself and thus our usage is legitimate. 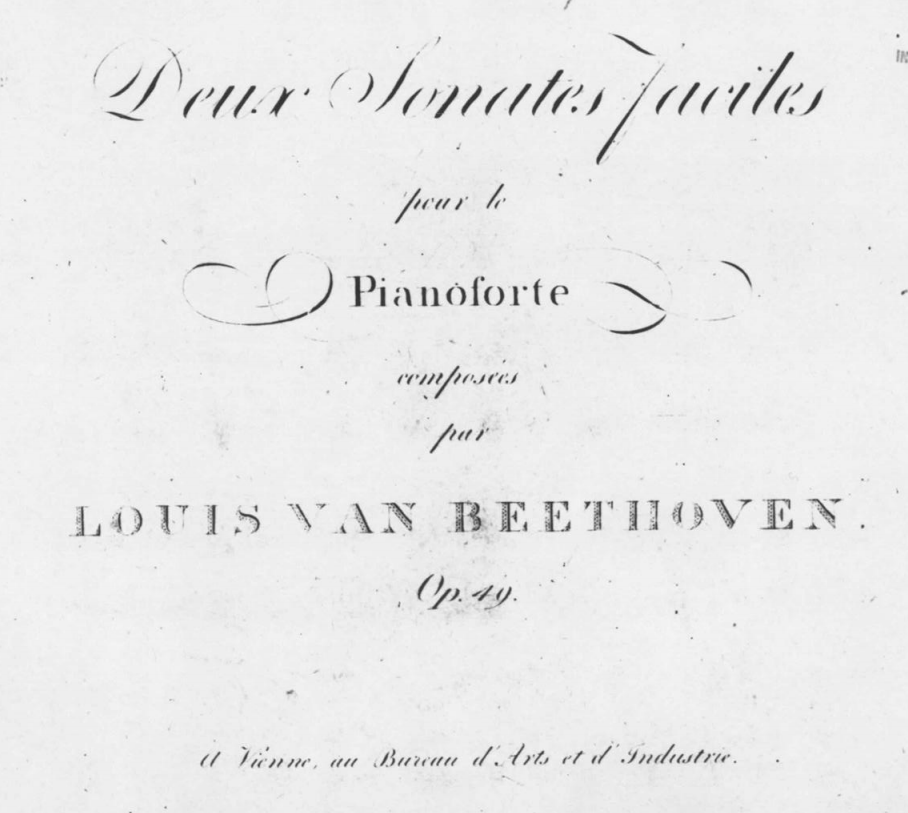 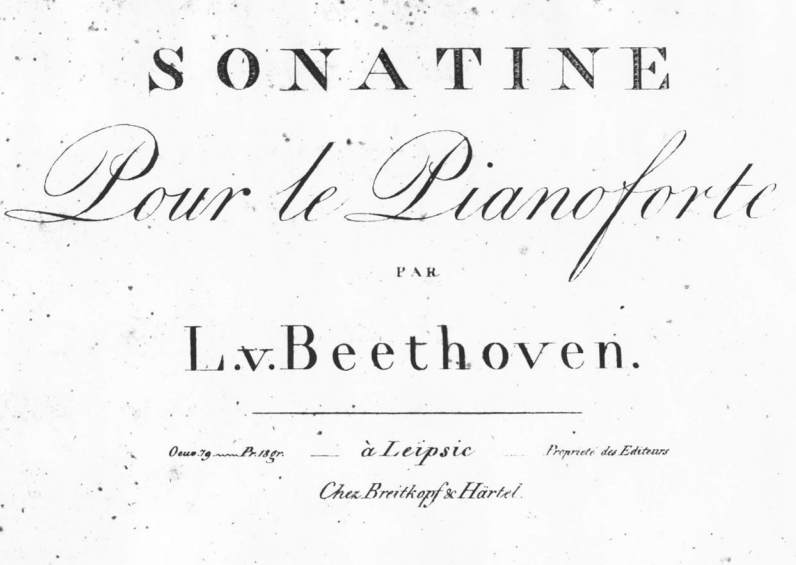 Grande Sonate op. 7: Another more challenging, actually extremely challenging matter. The Sonata op. 7 is Beethoven’s first sonata to bear the addition “Grande” in the French title of the original edition. Unlike the 3 Sonatas op. 2, this sonata was published individually, not as part of a group of works. Yet this is also the case with the Sonatas op. 13, 22, 26, 28, 53 and 106, which were also all described as being “great” sonatas, both in the original editions as well as in the manuscripts, where they still survive.

Thus it is misleading to only give the Sonata op. 7 this epithet. And we have to ask ourselves whether the “great” could not be applied to the Sonatas op. 2 no. 3, op. 10 no. 3 and op. 57 (Appassionata!) in equal measure. Particularly in the case of the latter, we might have expected to find this addition, yet it is not to be found in the autograph.

To put it another way: Does the word “grande” really tell us something about the importance and significance of the work? Is it not perhaps another attribute often used by a composer or a publisher in order to sell more copies? Should we really only use it for the Sonata op. 7? (It is reassuring to know that this epithet has not been to assert itself universally.)

Hammerklavier Sonata op. 106: Yes, this title is also “genuine”. But this does not make it any less problematic. “Sonate für das Hammer-Klavier” is the title already given to the Piano Sonata op. 101 that preceded it chronologically; it was also give to the Sonatas op. 109 and op. 110 that follow Opus 106.

This addition can be traced back to Beethoven, who prior to publication of the Sonata op. 101 wanted to compel his publisher S. A. Steiner to include a German term in the title alongside the usual Italian “Piano-Forte”. In January 1817 he sent Steiner a draft for the title, writing: “the title must first be presented to a language expert. Hämmer-Klawier [thus referred to in his draft for the title page] is surely German, besides the invention [of the instrument] is also German, give credit where credit is due”. A little later he once again requested that they consult an expert, as to whether “Hammer or Hämmer Klavier or even Hämmer-Flügel” might be the correct name. They were even to discuss the term “Tasten Flügel” before finally reaching the following conclusion: “After our own consideration and after consulting our Conseil we resolve and have resolved that from henceforth on all of our works for which the title is in German, instead of piano-Forte the word Hammerklavier will be used” (letter of 23 January 1817). 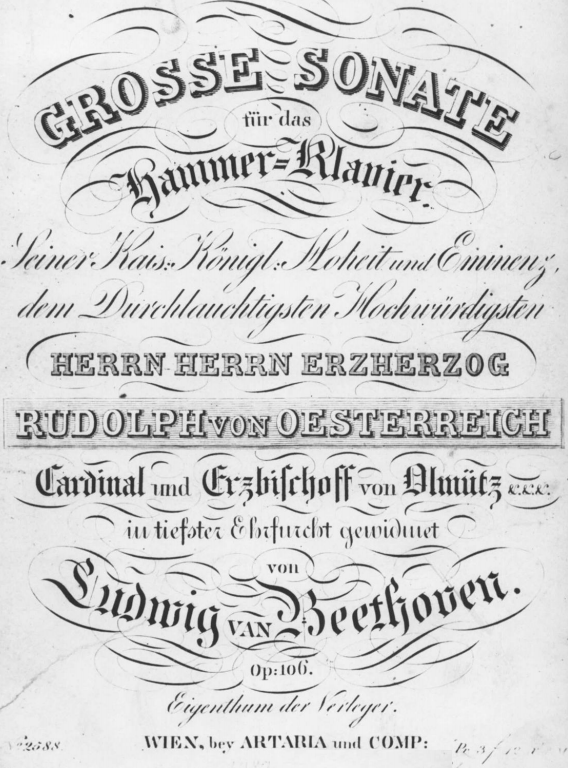 Mind you this discussion took place for the publication of the Sonata op. 101 and had as its sole aim to find a German term for the Italian name for the instrument. The fact that we call Opus 106 “Hammerklavier Sonata”, which was issued almost three years later, has other reasons that have associative and symbolic roots. Strength, work, energy, activity, vigour, power, determination and intensity – we associate all of these qualities with the hammer and the person that wields it. And they are also without a doubt true of Beethoven’s most epic creation for the piano, the “Hammerklavier Sonata”.

So much for the “authentic” epithets for Beethoven’s piano sonatas in part 1 of this blog entry. In September I’ll be looking at the popular titles that did not emanate from the composer.