The exceptionally lighthearted D-major Trio of the Menuetto in Mozart’s otherwise so darkly dramatic d-minor String Quartet K. 421 has always been one of my favourite pieces. The first violin, with its “pizzicato” accompaniment by the lower strings, cleverly plays there with reminiscences of folk music: on the one hand, it is quite obviously striking up a yodel, recognisable by the simple triadic melodicism flipping repeatedly from “chest” to “head” voice, just like a real alpine yodler; on the other, the entire movement is almost prototypically pervaded by the so-called “lombardic” rhythm, unmistakeable signs, for instance, of Scottish, Hungarian or Slavic folk music (recognisable in the inverse-dotted, syncopated rhythm): 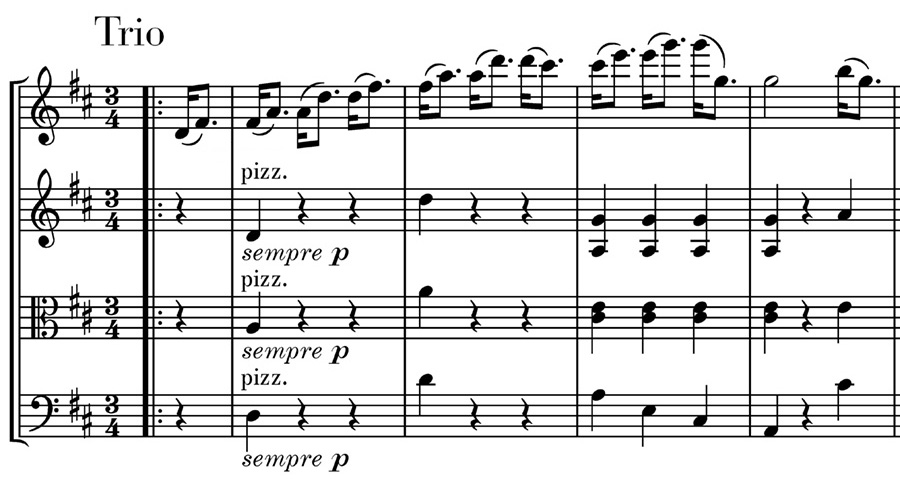 Let’s listen to the short piece in the Jerusalem String Quartet’s magnificent performance:

As most Henle blog readers already know, I am currently working on Urtext editions of all the Mozart string quartets. Volume IV has already appeared, volume III with the six quartets dedicated to Haydn is appearing next year (2018). That’s where we’ll also find our little trio. And just this trio includes a small editing problem, not at all so easy to solve. Here it is, briefly – and I’d be greatly interested in hearing your opinion about it: that is, one time only in his autograph manuscript, in measure 14, Mozart does not notate the movement in the “lombardic”, but in the “normal” dotted rhythm: 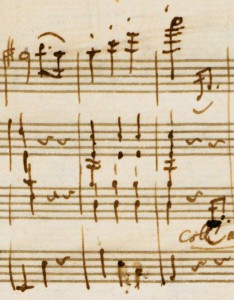 A writing error? Possibly, for even a Mozart can occasionally make a slip of the pen. And in a sense, making the matter more difficult is that in the first edition just this spot is engraved and printed as expected, that is, in lombardic rhythm.

This first edition was published in 1785 by the Viennese publishers Artaria, virtually right under Mozart’s nose, and is in this respect of prime importance as a source. However, by virtue of the fact that the printed score does indeed include much done hastily and imprecisely, even to additions (especially dynamic markings) going beyond the autograph at numerous spots, these additions and corrections are so striking that they can only go back to Mozart himself. So, it is clear that in the parts material copied from the original autograph score, he refined and corrected his text. Mozart’s private performances of the “Haydn Quartets” are documented in his correspondence. The parts material that he corrected, to then serve the music engraver as engraver’s model, is of course lost.

All of the many printed editions from the 19th century up until about the middle of the 20th century are based on this first edition. Our spot in question is – of course – always in the lombardic rhythm. Numerous recordings from the period up to about 1960 document this problematic reading, since most string quartets of the early 20th century played from the Edition Peters, much used then, but now without value because its text is not that of a critical edition. Here is an example by the heroes of my youth, the Juilliard Quartet:

Until Alfred Einstein came and produced the 10 “famous” Mozart string quartets, critically edited for the first time according to modern methods (published in 1945 by Novello publishers). A turning point in the history of this edition, for Einstein was able to expose and rectify innumerable traditional errors in this work, as well as also in the d-minor quartet, through meticulous comparison with the autograph. He takes the K. 421 trio passage from the autograph without any commentary. Ludwig Finscher’s source- and text-critical editorial work for the New Mozart Edition (NMA, 1962), and the Bärenreiter parts material are based on Einstein’s edition (taking over Einstein’s correct decisions, but unfortunately also many of his errors). At our spot, this edition reproduces the autograph reading, not that of the first-edition, thus not the lombardic rhythm, but: 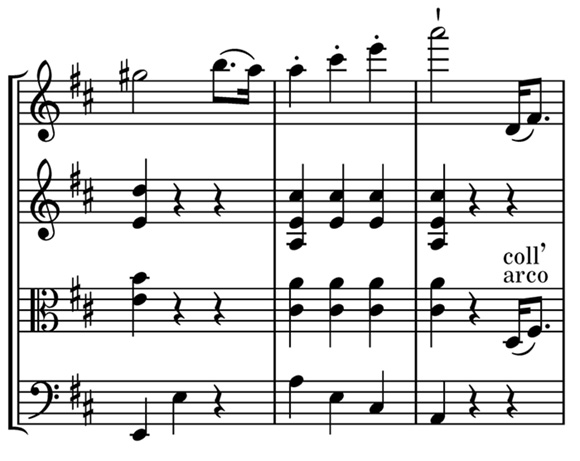 There are no string quartets known to me that would not follow this text today. Yet which version is the correct one, that is, which did Mozart want? Both sources, autograph as well as first edition, rank as primary. A virtually insoluble conflict. Certainly, Mozart’s autograph is clear, and the first-edition’s engraver (or the copyist of the engraver’s model, now lost, on which this edition is based) could also have made a slip of the pen. But just the same, Mozart also could still have corrected this little passage before publication.

I am not certain what to edit in the main text.  Personally, I like the autograph version better – and I could also give a musico-stylistic reason for that. But editing is indeed not a matter of taste. Shouldn’t I most likely comment on this spot in the critical report and/or perhaps even give the respective alternative reading as an “ossia” footnote? But what do you think, string-quartet players and Mozart fans amongst our blog readers? What arguments can you contribute? I am keen to know and grateful for your interest!