Posted on September 4, 2017 by Annette Oppermann

Are you also one of those manuscript hunters on the Internet? It is, indeed, almost incredible how many music autographs have become freely accessible there these recent years. Whether we visit composers’ pages like Schubert-online or Bach-Digital or ransack the relevant portals of larger (and also smaller!) libraries: From the St. Matthew Passion to Beethoven’s Ninth, we find all sorts of exciting reading matter – stimulating also, of course, comparison with our Urtext editions.

So, for example, a violinist recently reported to us that from the great Ruggiero Ricci years ago he had learned that the Brahms violin concerto was always to begin absolutely legato. As proof Ricci pointed out the phrasing in the autograph score, already available at that time in facsimile.

Excerpt from the autograph score, The Library of Congress, Washington

A glance at the source, easily accessible today on the Internet, confirmed the violinist’s recollection and led him to question why then there was an additional staccato dot at the 16th-note e1 in our edition calling for a different articulation:

Excerpt from the Henle Urtext edition

The actual question was easily settled, though the all-too-familiar ‘but it says in the autograph…’ led me for once to use the blog for a general reply, because we have already received countless enquiries starting with just these words. The notorious reference to the autograph naturally reflects first of all the high regard for the composer’s autograph, indeed, the almost auratic quality many autographs have for musicians to whom Henle publishers also readily pay tribute with facsimile editions that include commentaries – not coincidentally, you will find a whole series of such facsimile editions in our catalogue.

As a publishing house offering Urtext and composers’ complete editions, we rightly have the reputation of taking into account this special significance of the autograph for the edition. But: In fixing a composition in writing, the (full score) autograph is so often only one element amongst many, which is why numerous other sources (insofar as they are extant) must usually still be consulted for an Urtext edition. The revised engraver’s model or a composer’s authorised first print can give further important evidence. In addition, parts are prepared for early performances, and for concertos, the solo part is often revised during an exchange of ideas with a performing musician. This is exactly the case with Brahms’s violin concerto, whose various sources are, incidentally, delineated in an impressive stemma in the Johannes Brahms Complete Edition, jointly edited by Linda Correll Roesner and Michael Struck. 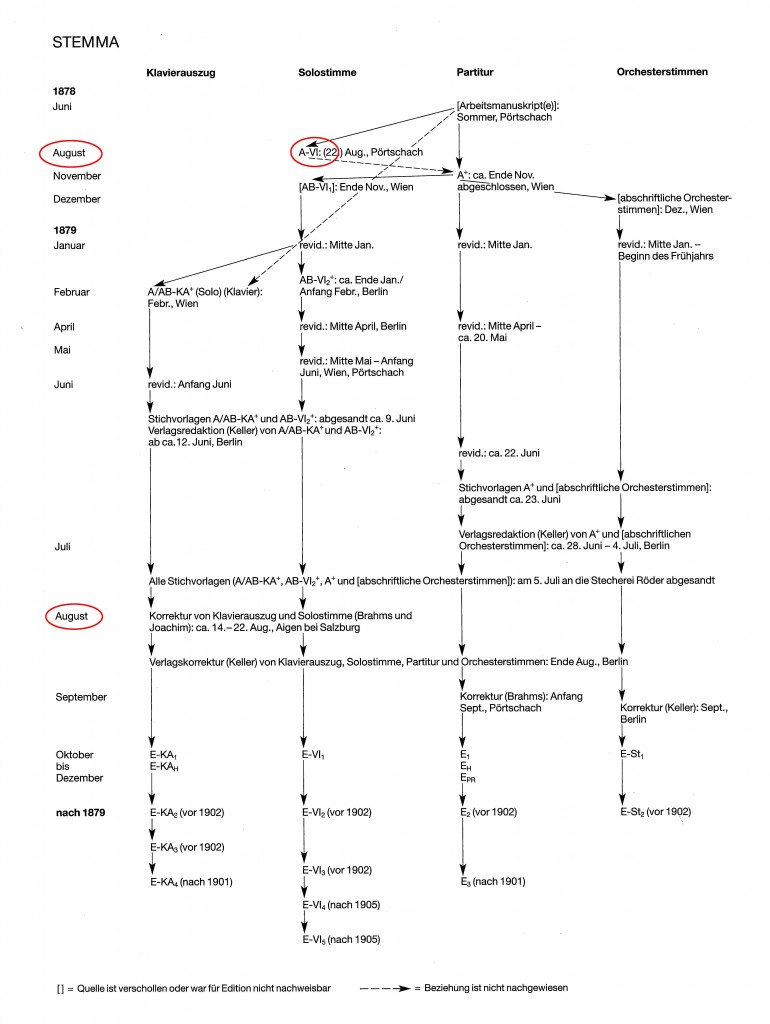 At Brahms’s express wish, his friend, the violinist Joseph Joachim, had a very decisive impact here on the solo part: From the autograph violin part for the 1st movement (source A-Vl in the stemma) already sent him in August 1878, to the checking of the galley proofs of the piano arrangement and solo part 12 months later, he attended the work’s genesis, meanwhile performing the work repeatedly, and exchanging ideas with Brahms about vital or possible changes. These corrections, mainly concerning placement of slurs, articulation and intricate chord fingerings were first stipulated in the separate autograph part, then in a separate copied part (AB-Vl2), but not necessarily in the autograph score. For this reason Brahms also specifically indicated to the Simrock publishers when the work was being prepared for publication, that the solo part was ‘to be corrected from the separate part’, but not, for instance, from the score.

And so perhaps you can well imagine where the staccato dot in question comes from…. Exactly: It is based (as detailed in the complete-edition’s editorial report) on Joachim’s entry in the autograph solo part – and also included in the printed violin part; but in the score the entry was inadvertently not adopted by the highly-reliable publishing-house editor, Robert Keller. Which only goes to show – even amongst editors, to err is human….