Posted on October 30, 2017 by Wolf-Dieter Seiffert 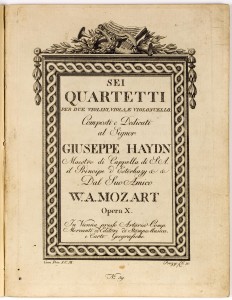 When the composer’s autograph manuscript of a music work is extant, then we have a unique opportunity of “looking over the creator’s shoulder” as the ideas are being written down. The mysterious creative process is nevertheless revealed only to those who can then question the existing autograph text, going beyond what is purely philological, editorially speaking. It is my firm conviction that here autograph corrections are the ideal way to start. The musico-analytical curiosity that asks of a correction, “Why?”, in qualitative terms, opens a door otherwise forever closed. I already explained these ideas once before in another blog post : ‘Autograph corrections are to some extent the visible marks of a compositional problem that the composer solved by intervening to improve or revise. Upon investigating the marks and trying to understand them we immediately find ourselves inside the music.’ I also regard this approach, incidentally, as a very promising musico-pedagogical angle so far still completely untapped.

Mozart’s autographs of his six string quartets dedicated to Joseph Haydn teem with such visible compositional “marks”. So, it is true what Mozart himself groaningly conceded in a way in his printed dedication: these works would be the “fruit of a long, laborious work” (“il frutto di una lunga, e laboriosa fattica”).

How about two examples?

The little trio in c minor of the great C-major String Quartet K 465 shows in Mozart’s manuscript (fol. 63v), whose scan can, as we know, be comfortably accessed online, an immediately recognisable deletion right at the start in the cello. The facts of this autograph correction can be deciphered without any difficulty. Mozart had originally written the following: 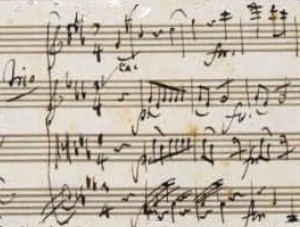 The correction is thus not about merely rectifying a writing error (which may well also happen). No, the original version is musically and orthographically absolutely correct and makes sense. Rather, it is a later intervention in the original musical conception. And this must have occurred directly while writing the opening, at the latest while writing down measure 4, for with the immediate repetition of the same musical design in mm. 5—8 (and at later places, such from m. 16), Mozart already notated (unrevised) the new design of the cello entering on the weak beat.

The impact of this small change is considerable: The bass, (together with the two middle parts), post correcturam no longer stresses the heavy beat “1” as at first, but gives a dab of bass on the weak beat “2”, incidentally inserting it tailor-made in the respective quarter-note rest of the first violin’s ascending triadic line. Violin and cello thus now certainly share alternating beats. 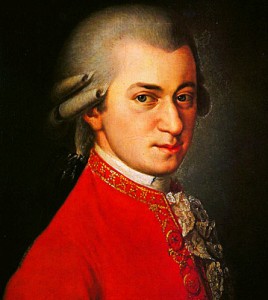 So far, so good. But why did Mozart now change the cello figure? What is so “bad” in the first version? Or the other way around: Why should the (ultimate) solution be better? And it is precisely with this question that the door opens effortlessly into the deeper understanding of the present composition – a door not located in any printed text.

My interpretation: by intentionally “weakening” the two focal points in measures 1 and 2, Mozart is aiming at “strengthening” the subsequently connected measures 3—4. If Mozart’s two first measures, to be played piano, are now of light elegance, he combines the two “answering” measures 3—4 with forte and the cello’s strong cadence motion; the cello thereby stresses for the first time in measure 4 the “1” which is now all the clearer, for in the first version the “1” was already persistently (and certainly more plainly) generated as the impetus.

And I can gain still another facet from the correction: In the deleted first version, there is a conflict between the upbeat-playing violin I, and the opposing bass, playing the downbeat. This simultaneous contrast between the two-note figures has in fact a certain contrapuntal appeal, but the cello’s octave beats seem too banal, too ordinary to be recognisable as a response to the violins – just a mere, typical bass figure. Not only does Mozart offset this heavy-handedness by the deletion, but he now confers the indicated elegance on the cello by including it in the violin figure, retaining the principle of contrapuntal confrontation for the dramaturgical intensification towards the close of the movement: now to our surprise in measures 29ff., the cello takes over the lead with the opening’s c-minor triadic melody, and, rather than imitate the opening measures, the violin I now plays the melody off the beat in the metrically shifted echo:

It seems to me that Mozart was intuitively recognising this essentially more sophisticated counterpoint as the design option just at the moment of initially deleting the original cello notes, in order to transpose them so superbly.

My second example comes from the same brief movement:

To be found in the autograph abruptly in connection with the end of the trio (fol. 64r) are still a couple of notes in the first violin and in the cello, which Mozart, though, immediately deletes again. What is this innocuous deleted sketching supposed to mean? Well, I’m certain that Mozart had for a brainwave moment a planned harmonic modulation for a “2nd ending” (seconda volta as a deceptive cadence), as follows: 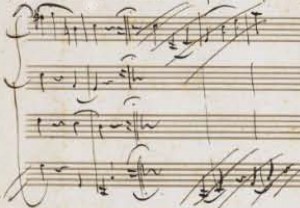 What else could the ascending A-flat-major triadic line of the violin I at this spot mean? Here, too, we must ask: Why then did he again immediately delete this brainwave? We can, no, we should speculate about this productively. In doing so, we should always keep in mind (hearing) the entire compositional design in order to be able to recognise hidden references.

Here is my attempt at explaining the reason for the deletion: the doubly-dominant, augmented six-five-chord on A flat sounds, indeed, already directly before the closing bar line. A further modulation with a potential deceptive-cadence phrase would then probably have been too much of a good thing. Especially since this movement is anyway full of harmonically “wild” moments. The ultimate close is now much more compact and resolute. And, Mozart probably noticed during sketching that no matter how he coupled the emergent A-flat-major triad phrase of violin I to the main motive in the cello (incidentally, probable compositionally based on the very closely related E-flat-major parallel passage in mm. 13—15), it always necessarily led to partially parallel octaves (we see the multiple corrections only within the sketch!).

Coming to my mind are a number of additional associated interpretative approaches to these apparently insignificant corrections in mm. 1—2 and at the close of the c-minor trio KV 465/iii.

Detailing all these would take us well beyond the scope of this blog post – but prove only the methodological potential of interpreting the work “from the source”.