Posted on January 15, 2018 by Norbert Müllemann

In my blog post of 21 March 2016, I lamented the existing “confusion” concerning the tied notes in Chopin’s 1st Scherzo. In the meantime, casually expressed, another 2 Scherzi later, 2 Scherzi more mature – and clearly even more confused, alas. The 2nd Scherzo, op. 31, and the 3rd Scherzo, op. 39, are just now appearing in my new edition. So, it makes sense to update my report from the Chopin workshop and to highlight a few problems in these editions. Therefore: “Confusion – episodes 2 & 3”!

The source material, or so at least it is my impression, gets a bit more complicated with every scherzo. No autograph is extant for the b-minor Scherzo, whereas for the 2nd Scherzo we have both an autograph (A) as well as also a copy (C), checked through by Chopin. The autograph was used as engraver’s model for the French first edition (FF), the copy, for the German first edition (FG). Before the French edition appeared, however, Chopin read two sets of galley proofs; the state of the text after the 1st proofreading became the model for the English first edition (FE). Chopin did not proofread FE and FG. This interrelationship amongst sources can best be captured in a stemma: 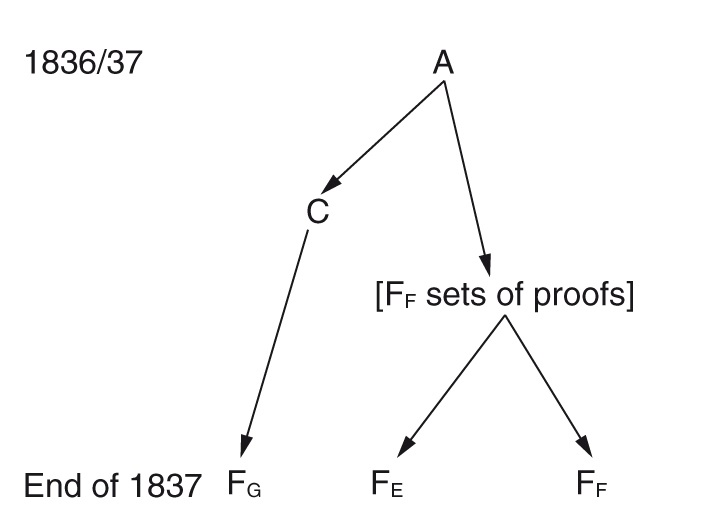 What can’t be seen from this schematic presentation are the following observations: Autograph A exhibits many signs that Chopin was still not entirely “finished” with the notation. Much is incompletely notated (dynamics are often lacking), and everything suggests that Chopin wanted to add these things then in the galley proofs for FF (which was done only to a very limited extent). Chopin did very carefully correct the copy C, on the other hand. I must therefore draw the following conclusions: FF is in fact the final definitive edition, thus the source corrected last by Chopin. It nevertheless shows an earlier and “worse” text state than C. So, although C does not represent the final version, it is the “best” source and was consequently the main source for my edition. This source evaluation has, of course, problems, for also “final” changes made by Chopin in FF have to be documented somehow.

The only way out is to have a detailed footnoting apparatus that indicates differing readings and explains them to the player. I would like to single out here only one example, since it best illustrates the “confusion” and is also quite prominent: 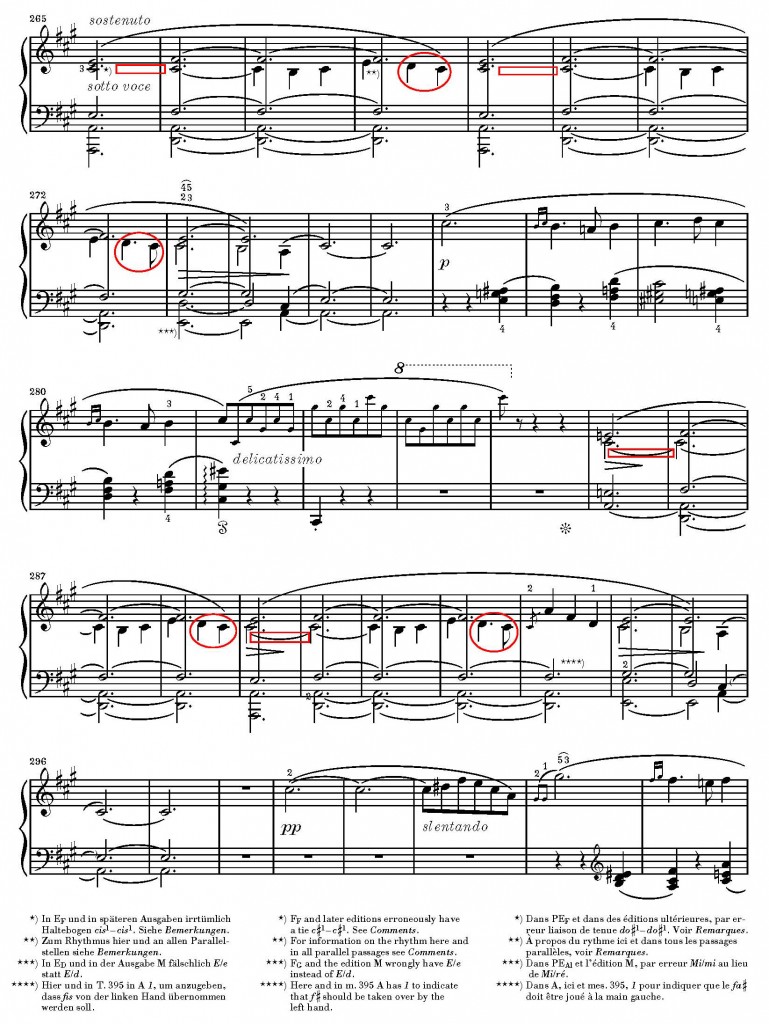 There are two aspects of this passage in the trio section that repeatedly make Chopin players frown: the question of ties (boxed in red) and the question of dotted rhythms (circled in red). The parallel passages differ from each other, leading to the question of whether that was Chopin’s intention or a mishap in transmission. The footnotes in my edition inform the player that here there is some room for interpretation, and the remarks in the Critical Report for mm. 265/266 and 268, etc., explain this in detail.

The confusion of source readings is to some extent increased by the fact that later editions introduce additional variants and alternatives still haunting the Chopin world to this day (for instance, editions identified in the critical reports as by Mikuli, Scholtz, Paderewski).

In the 3rd Scherzo, the point of departure is even more confusing. Here is the stemma for this work: 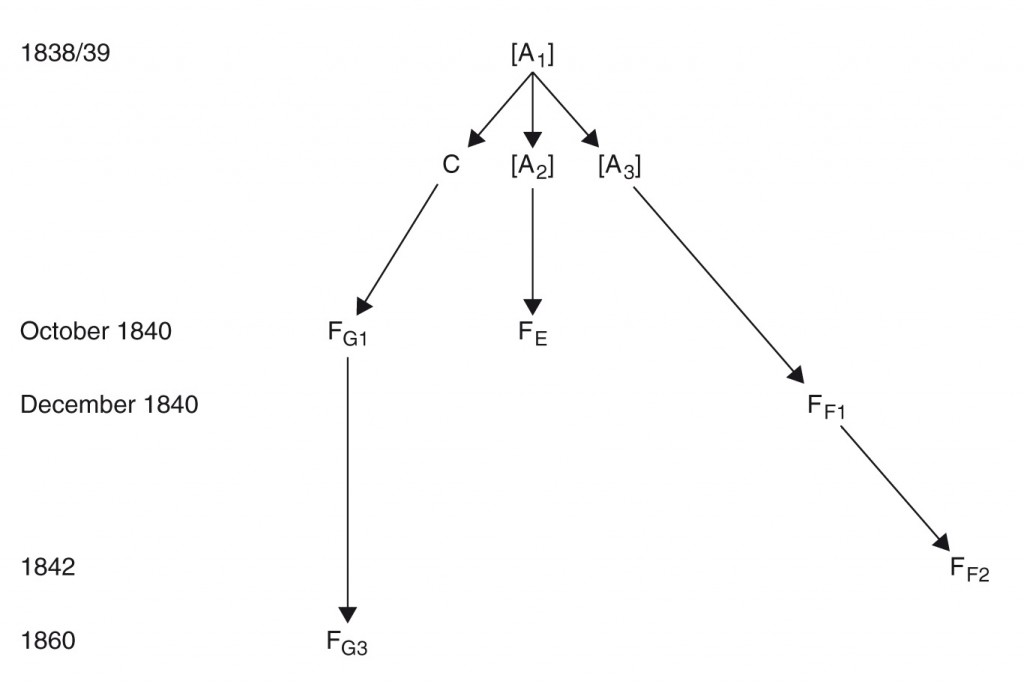 There are again three first editions (FF, FG FE), though now existing in various issues. There is a copy checked by Chopin, C, and finally three autograph sources, enclosed in square brackets here. As these sources are missing, whether they are really given in the places exactly as shown in the stemma – is speculation. It is, however, necessary to assume such intermediate sources, since otherwise the variants in the first editions can hardly be explained. A truly “hard nut to crack”. The main source in my edition is the French first edition, since in the case of the 3rd Scherzo, the copy C was unfortunately checked only selectively by Chopin – FF proved to be not only the latest, but also the most reliable source despite all engraving errors. The extant and presumably authorised variants from the rest of the sources are, though, numerous, likewise the footnotes in my edition. Two examples: 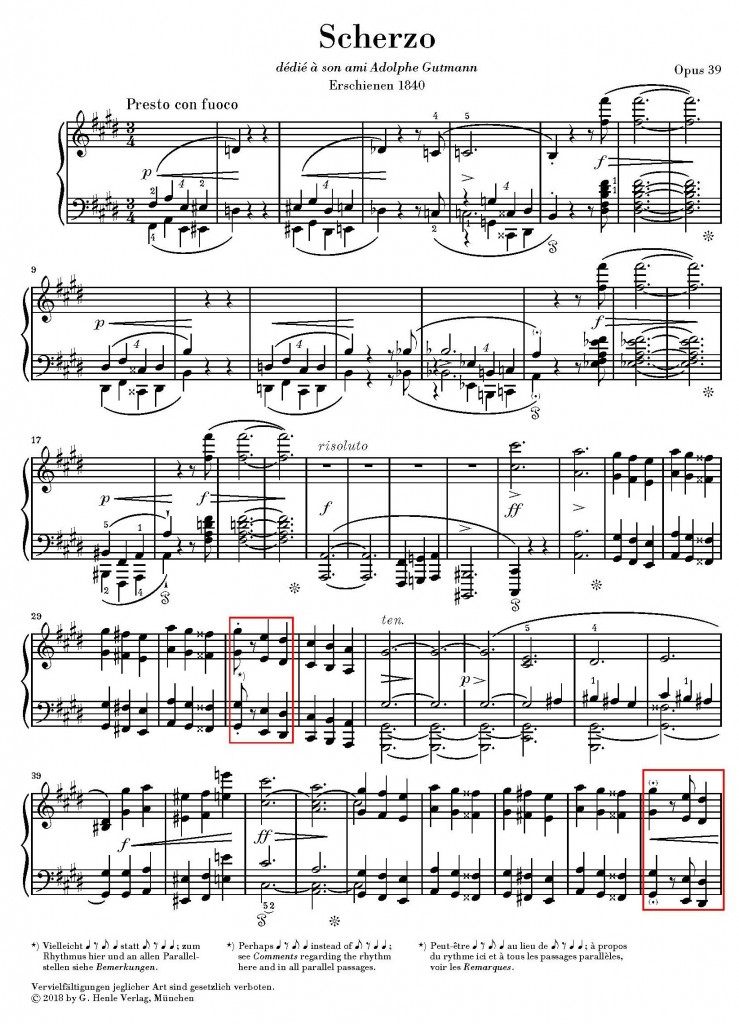 Many pianists will perhaps be disappointed, because I picked the dotted version in m. 31 and parallel places. But there are good reasons for editing mm. 31 and 47 differently:

A passage existing in three variants is m. 460. All three chord variants are probably authorised by Chopin – which fits with contemporaries’ reports that he never played his own works the same way twice.

Chopin might well have smiled at the needs of today’s editor. Nevertheless, it is our task to document the tradition, to separate authorised variants from later “inventions”, to edit a music text based on a main text and to resist the temptation to mix sources and select the “most beautiful” readings. A difficult, but exciting endeavour! And at the end, to “clarify” the “confusion”, to inform the interpreter and then let him have the freedom to reach his own decisions.

You’ve certainly guessed it by now – the “confusion surrounding Chopin’s Scherzi, episode 4”, will not be long in coming….