Posted on February 26, 2018 by Wolf-Dieter Seiffert

Occasionally in the edition business there is an insoluble conflict between a clear source finding and musical “logic”. The eminent pianist, university professor and friend Michael Schäfer drew my attention to one such particularly fascinating case. The facts are briefly described and presented to my interested readers for discussion here.

Felix Mendelssohn Bartholdy is known to have been of that composer species endlessly honing and improving a new work right up to its ultimate publication. Such was also the case with his Piano Trio in c minor op. 66. Not only did he obsessively correct and change in his autograph score what he had originally written down, but he then continued to correct it in several further stages during the publication process. Even shortly before Breitkopf & Härtel first published the work in February 1846, Mendelssohn sent the publishers, who by then were certainly already tearing their hair out, yet another detailed handwritten correction list, requesting its execution (which was also done). All this is documented and evaluated in an exemplary manner in the relevant volume of the Leipzig Mendelssohn Complete Edition (remarkably enough, there is, to date, still no practical, inexpensive edition of this music text for musicians…).

Now, to the note in question: In the finale of the c-minor Trio there comes once again in the middle of the great C-major closing apotheosis a short calming moment (“tranquillo”, from mm. 296ff.) before the three musicians then plunge violently into the grandiose close (“sempre crescendo e con più di fuoco”). In the right hand of the piano part at m. 298 f., Mendelssohn notated the melody line in conventional octaves plus thirds:

An interesting observational aside to this autograph finding: he crossed out the previously notated sound-reinforcing octaves – after all, the passage should be heard p dim, then p tranquillo.

The same passage is now shaped much more opulently in the first edition, not to say, changed to be virtually unplayable and musically highly dubious in m. 298: 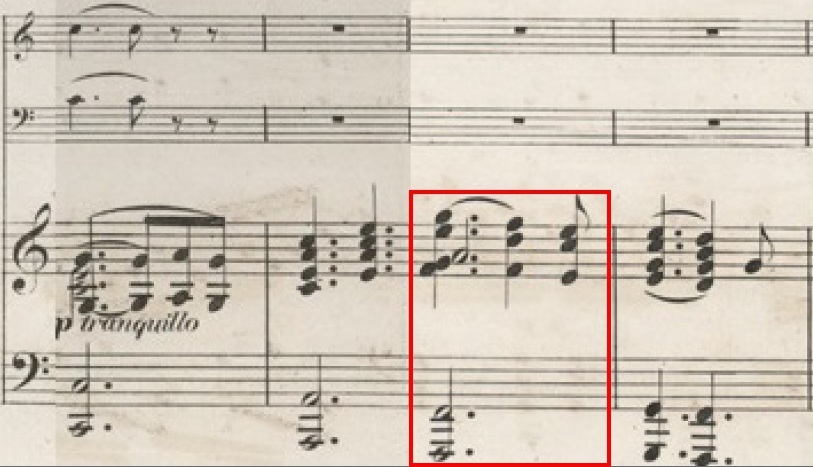 Since, unfortunately, all the correction stages that took place at Breitkopf between the autograph and first edition have disappeared, we do not know whether Mendelssohn had made this striking change either in the piano part in his own autograph engraver’s model (source “[C]” of the Complete Edition) or in the process of proofreading the galley proofs. Philologically, the facts are clear and watertight: The first edition undoubtedly represents Mendelssohn’s intentions, especially as in the already mentioned list of Mendelssohn’s corrections of errors sent to Breitkopf shortly before publication, this passage is not criticised, therefore ultimately approved.

What is watertight philologically does not always convince musically. Here is such a case. What is clear and easy to understand is that Mendelssohn retroactively, so to speak, “re-thickened” his original “thinning out” of the passage’s sonority: Added in m. 298 is a wonderfully dissonant dotted half note a1, followed by the filler g1 in both subsequent chords. The note, which is terribly disturbing, is in m. 298 the quarter-note f1 added below the dotted half note a1 in the first chord. This results in a five-note! chord that is extremely uncomfortable to play (in tempo), instead of an otherwise usual four-note chord, unnecessarily reinforcing into the bargain the bass tone musically-tonally (and therefore even inaudibly!) and obscuring the clearly fundamental octave line plus third above.

All of the work’s later printed editions, including the once-popular Peters Edition (plate number 7133) and the earlier Henle Urtext edition (HN 250, meanwhile out of print) have therefore omitted this f1 without further ado. The Leipzig Complete Edition as well as our house’s new, revised Urtext edition restores the f1, absolutely for good reason, philologically-editorially: 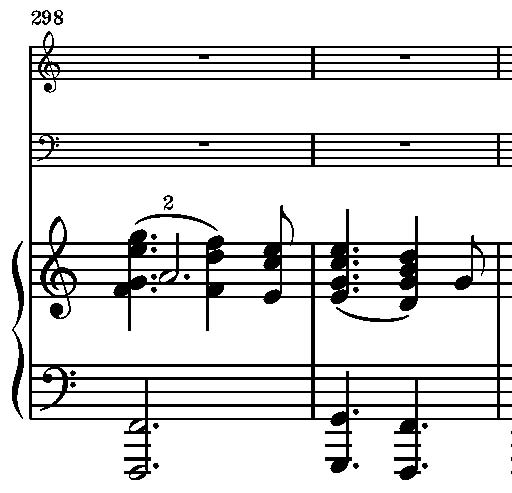 If we want to assume that the f1 was actually given inadvertently in the print (which I personally believe), then a (supplemented?) dotting could, for example, have been erroneously read in the lost galleys by the engraver as a note head f1 directly adjacent to g1 and this then overlooked by Mendelssohn. Possibly, though not necessarily so. Of course, we cannot entirely rule out an engraving error that Mendelssohn, a critical and good proofreader, missed. Usual, tried-and-true editorial practice implies, however, necessarily accepting an engraver’s error only when – and then necessarily to correct it – the finding must, without any doubt, be musically (!) wrong (what we call “emendation” in the specialist jargon).

This is most certainly not the case here: The f1 is possible, albeit musically and pianistically disturbing, to say the least. There is no such thing as “right” or “wrong” in such cases. Philology and musical expertise are in conflict. All pianists have to decide for themselves. In the forthcoming edition, we shall ram it home by adding a footnote at the passage discussed here. Thanks to a hint from an attentive and sensitive pianist (see above). We editors need such musicians to make our Urtext editions ever just a bit better. Thank you!