Posted on April 9, 2018 by Annette Oppermann

Of course not, Christmas is out of the question only one week after Easter. But, the rich boon of meanwhile twelve Bartók Urtext editions already makes us think of a table loaded with gifts – especially with even amongst them, the most recently released Romanian Christmas Songs, is a veritable Christmas title. So, let’s just take a closer look…. 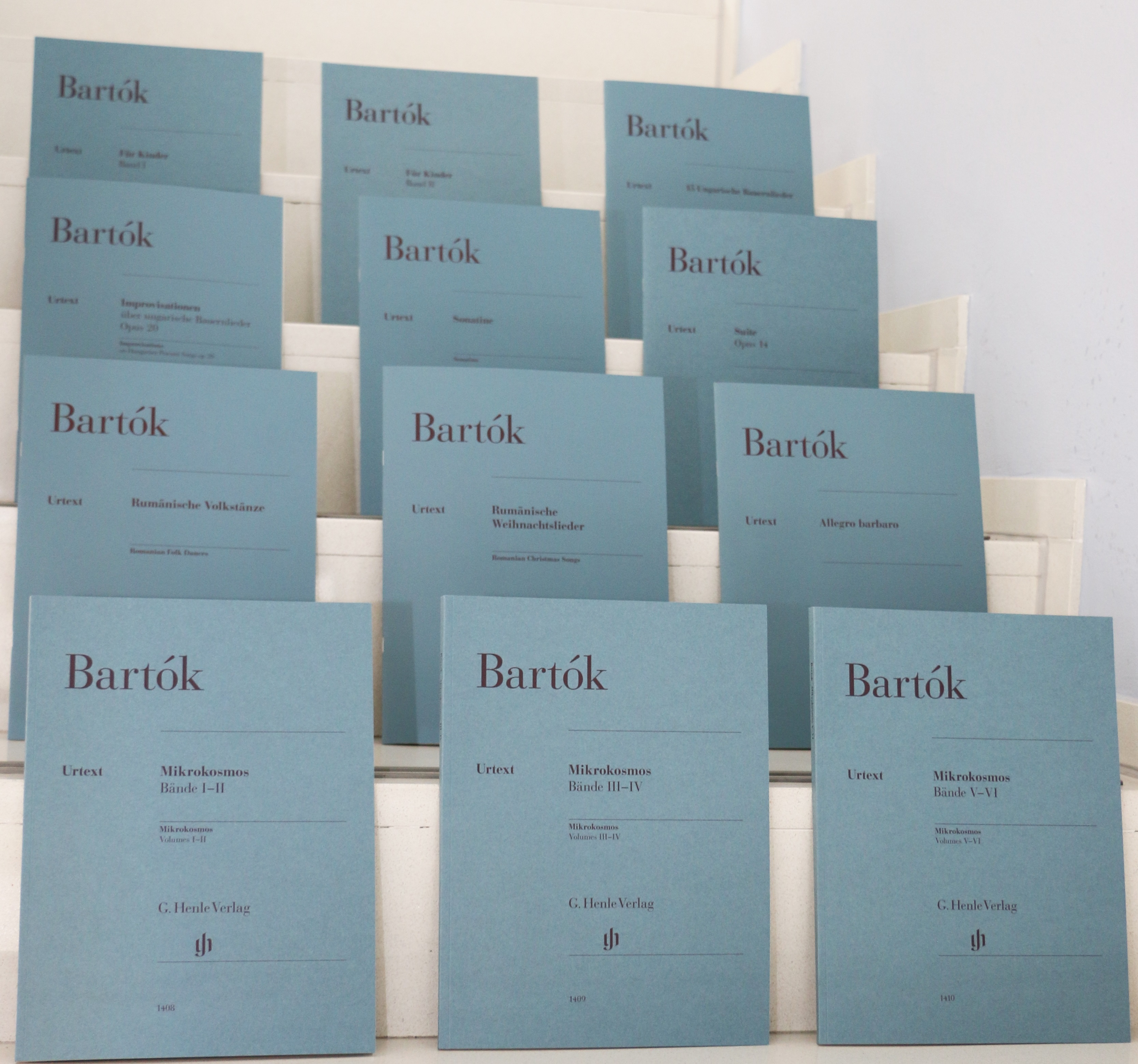 Two years ago we started Bartók off with the famous Allegro barbaro. Other popular individual works followed with Sonatina and Suite op. 14, together with collections of folk music ranging from the Romanian Folk Dances and Hungarian Peasant Songs to the avant-garde Improvisations op. 20. Bartók’s two great pedagogical collections are by now also available: that on Hungarian and Slovakian lieder for beginners For Children and – last but not least – Mikrokosmos, with its 153 numbers covering everything that can be learned on the black-and-white keys, from the first “Six Unison Melodies” to the “Six Dances in Bulgarian Rhythm”.

So, at Henle in the past two years we’ve issued not only another component of 20th-century piano music, but have also learned a great deal about Bartók’s music and editing it. For our practical editions do indeed arise within the context of the Béla Bartók Complete Critical Edition in close collaboration with the Bartók Archives in Budapest, where these questions have been pursued for decades. For the piano works we are even working with three generations of Bartók researchers:

The most famous of these is, of course, László Somfai, who also initiated the Complete Edition. In preparing his complete-edition volume Piano Works 1914–1920 planned for this year, he is editing numerous individual works in Urtext. His successor as editor-in-chief of the Complete Edition, László Vikárius, already contributed together with Vera Lampert the first volume For Children in 2016, and has also supervised subsequent resulting Urtext volumes. Finally, Yusuke Nakahara, as archives research associate, edited our three-volume Mikrokosmos Urtext edition in advance of the complete-edition volume.

The extensive collection in the Budapest Bartók Archives and the excellent networking with international Bartók scholars is enabling the editors to research Bartók’s oeuvre und work intensively, which, apart from the compositional sources, also involves even Bartók’s ethnographical collections, correspondence and personal memoranda, as well as his numerous publications of and about music. For as a child of his time, Bartók expressed himself most diversely in word and sound: whether in essays or lectures, in broadcast recordings, concerts or so-called instructive editions of other composers.

These editions of the piano works of a Bach or Mozart, intended and elucidated for performance, include as many as some 2000 printed pages in Bartók’s estate – and give an idea of exactly how he interpreted the music notation. No wonder that then for his own works he confronted the publishers with pages-long explanations on the position and width of crescendo hairpins and set the highest standards for music notation – a challenge that we gladly accept!

The music text itself of our blue editions is the same as the complete-edition volumes, but everything surrounding it is modified for practical use. So, the questions on “Notation and performance” that are discussed in detail in the complete-edition volume are in essence summarised in the Urtext edition for the performer. As “Editorial notes for the performer” they explain, for example, Bartók’s pedal markings or his distinctive use of phrase markings in compositions based on folk music: Whereas here the simple double-stroke marks only the end of the strophe (without retarding the musical course), a simple stroke or a comma above the notes indicates a short pause. 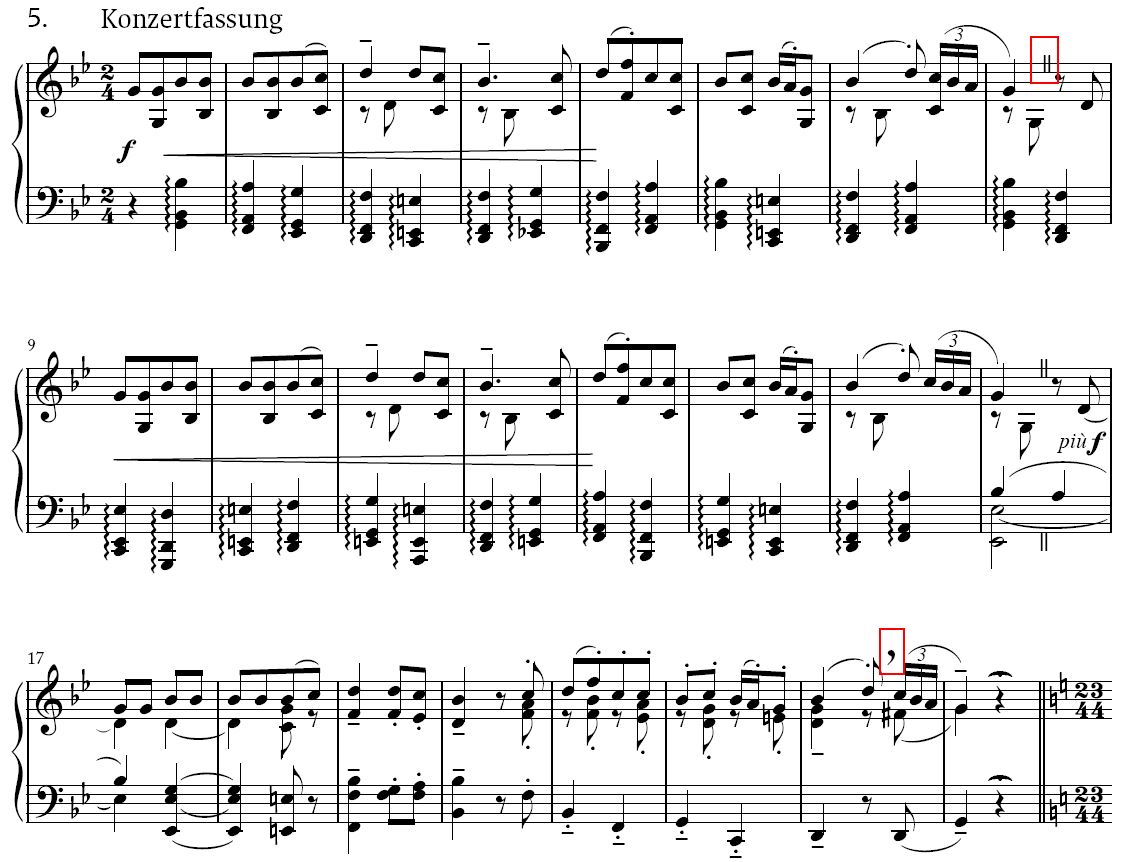 Concert version of No. I/5 of the Romanian Christmas Songs

There are at the same time references to Bartók’s own playing practice, going back in turn to the expertise of the Bartók scholars in Budapest: Whether it be evaluating the printed programmes, showing us how Bartók put together individual suites for concerts from gigantic works such as For Children or Mikrokosmos – thus significantly inspiring today’s musicians for the next performance evening. Or, whether it be meticulously comparing the tempi that Bartók selected in his editions or for performance.

László Somfai on his edition of the Sonatina:
“In the Editorial notes for the Perfomer […] we compare the different tempos of the first and revised editions with the composer’s recorded performance to show how Bartók changed his mind after long years of concert practice.”

Perhaps the most exciting are the transcriptions of “concert versions” from Bartók’s recordings, first carried out for the complete edition – inviting you in our Urtext editions to try them out as the composer’s own fascinating variants. Of course, these are shown as clearly separate in the edited Urtext: sometimes by “alternative” rendering in grey print as in the Allegro barbaro, sometimes in small-print ossias as in the second of the Romanian Folk Dances, sometimes in an appendix of its own as with  For Children. 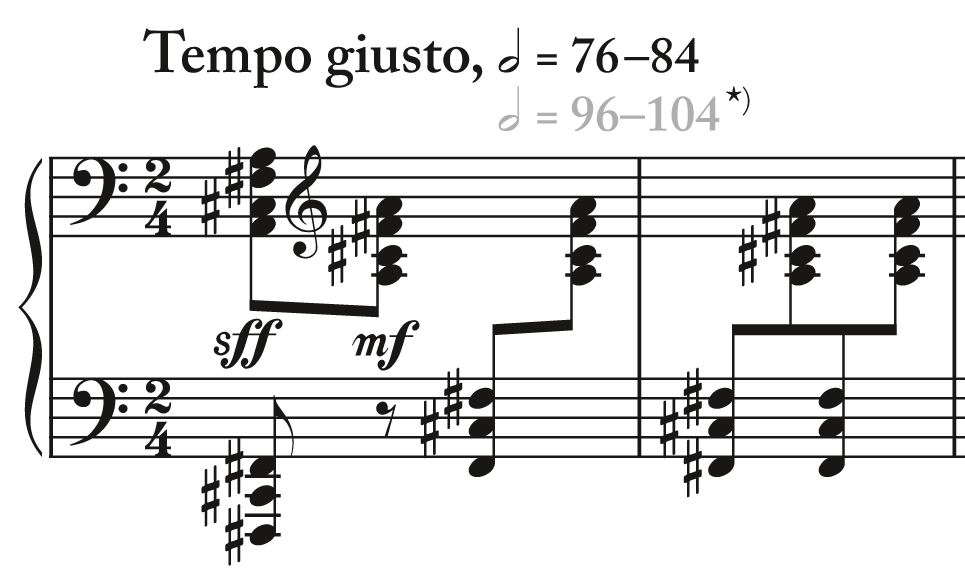 Grey print in the Allegro barbaro 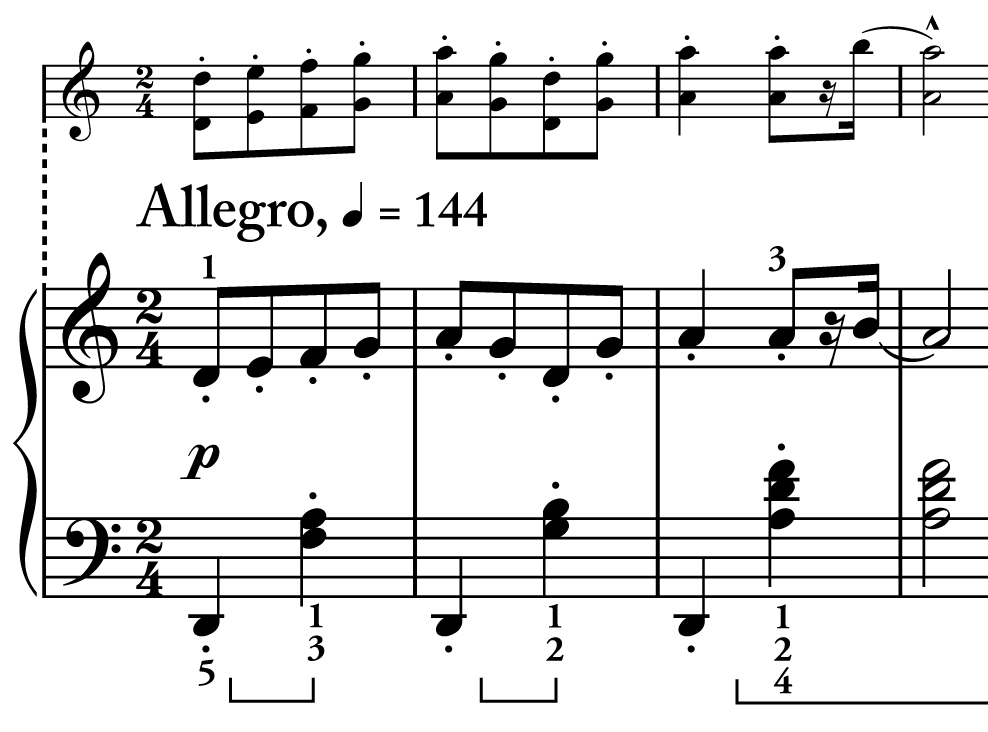 László Vikárius about his edition of Für Kinder:
“It was a great pleasure to study and publish Bartók’s very imaginative children’s pieces in the two versions (Hungary in 1908–1911, USA in 1943). Although the complete presentation was reserved for the Complete Edition, we could also still present crucial variants of the early version in the appendix to the Urtext edition. It was a special challenge to make a transcription of two pieces from Bartók’s incredibly free recordings.”

Another advantage of creating our Urtext editions from the complete edition can literally be grasped with the hands in the case of the Mikroskosmos: Here we can offer the six-volume work by Bartók lavishly provided with explanations and exercises in three extremely handy double volumes. For this we have minimised the source description (leaving detailed explanation for the complete edition) and adopted the information about Bartók’s way of performing, crucial for the musician, etc., as directly as possible in the music text itself. 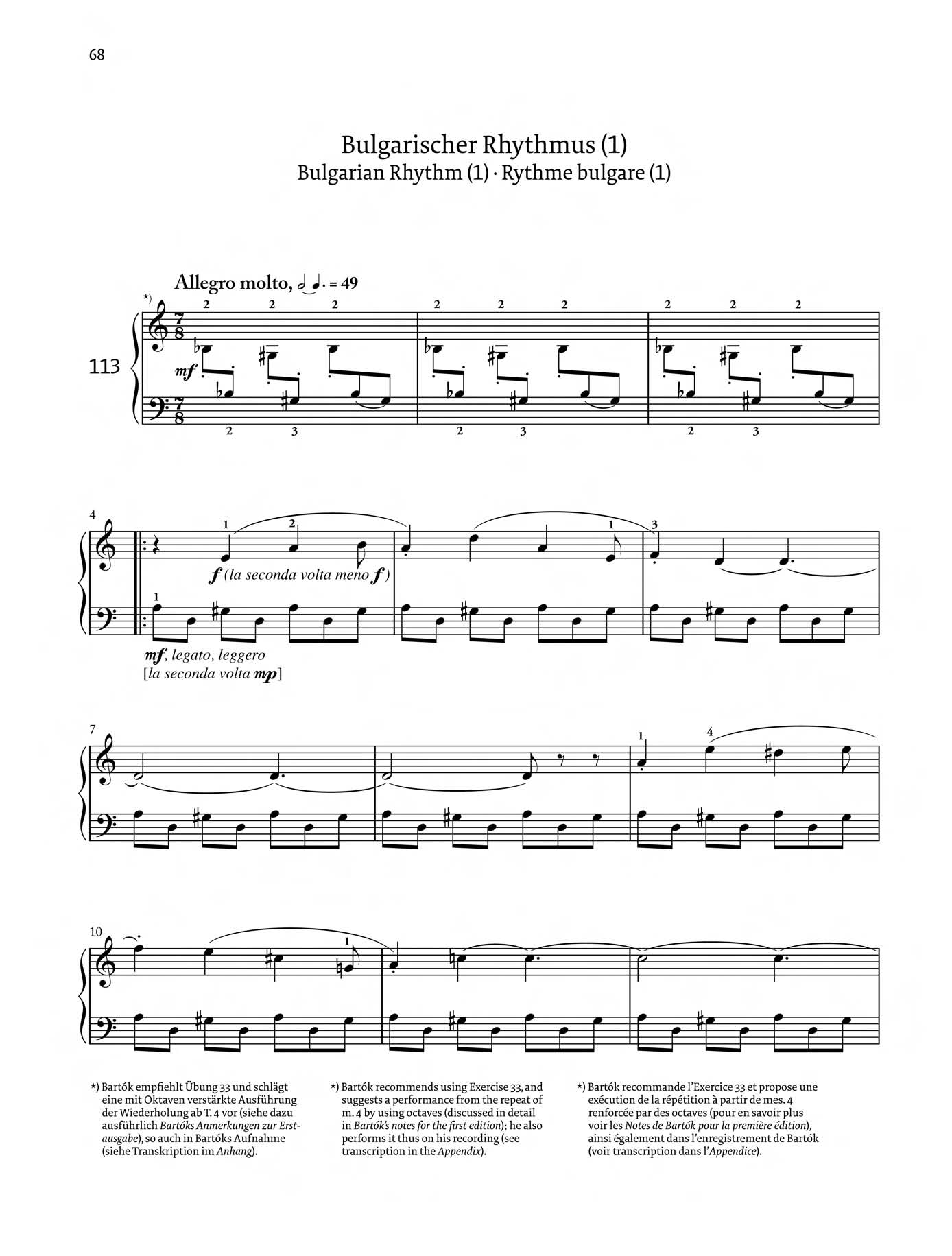 No. 113 from Mikrokosmos III-IV

(Noted only parenthetically here should be that interlinking the main text’s footnotes with exercises, comments and variants as well as other “Editorial notes for the performer” in the printed edition already involves a bit of the penchant for leafing through music pages…. Which is, of course, completely different with the Henle Library App, for here every additional piece of information is only a finger tap away – it’s not hard to imagine that Bartók would have enjoyed that!)

Yusuke Nakahara about his edition of Mikrokosmos:
“I would also especially mention the beautiful frontispiece in vols. V-VI, reproducing a page from the engraver’s copy. It clearly shows earlier numberings (for example, 102—106) and titles (for example, Five Dances!) for the ‘Six Dances in Bulgarian Rhythm’, documenting how Bartók enlarged his collection of pedagogical pieces, step-by-step.”

In the numerous works based on folk music, we particularly benefit from the diligence of our colleagues in Budapest. For these models are critically edited there from the sources for the complete edition and the lied texts are translated. So, in an appendix our Urtext editions provide an “Index of the melodies and their words” including translation. Here you will find not only substantive information, such as whether complaints are about unhappy love (No. 1) or about just a torn pair of trousers (No. 8), but also references to structural aspects such as refrains, and so, where possible, resulting in further stimulus for the musical interpretation.

No. 1 from the Hungarian Peasant Songs

No. 8 from the Hungarian Peasant Songs

No. I/1 from the Romanian Christmas Songs