A few weeks ago my colleague Peter Jost reported here on our commitment to Spanish Romantic music. I recollect with pleasure my early years in the publishing house, when with the first volume of the Iberia Suite by Isaac Albéniz in 2002, we were heralding this new programme segment. But it was not only the well-known masterworks from his pen that were finding their way into our catalogue.

Besides all four Iberia volumes with music from the early 20th century (1905–1908), initially following in the G. Henle publishing house were other well-known folkloristic piano cycles and individual works penned by Albéniz’: España (prior to 1890), Mallorca (1890?), Chants d’Espagne (at the start of the 1890s) and Suite Espagnole (pieces from the 1880s and 1890s). A bit off the beaten track is La Vega (1897) – its genesis chronologically sandwiched between the very popular pieces full of local colour and the colossal, highly virtuosic bravura compositions of the Iberia Suite. At 15 minutes’ duration, La Vega is an impressive jewel written by the Spanish composer, larger in size than any other piece of the familiar cycle. And yet it made its way into the repertoire only with difficulty.

La Vega is inspired by a poem by the English lawyer and poet F. B. Money-Coutts (1852–1923), who, thanks to inherited wealth, was able to free Albéniz from all financial worries for a long time. The composer set Money-Coutts’s poem to music, and at first La Vega was also probably supposed to become a lied before Albéniz decided to make it the introductory piece in The Alhambra Suite, a never-pursued piano cycle. Instead, in 1905 after a break of several years, he finally turned to the suite that was to immortalise him in music history. 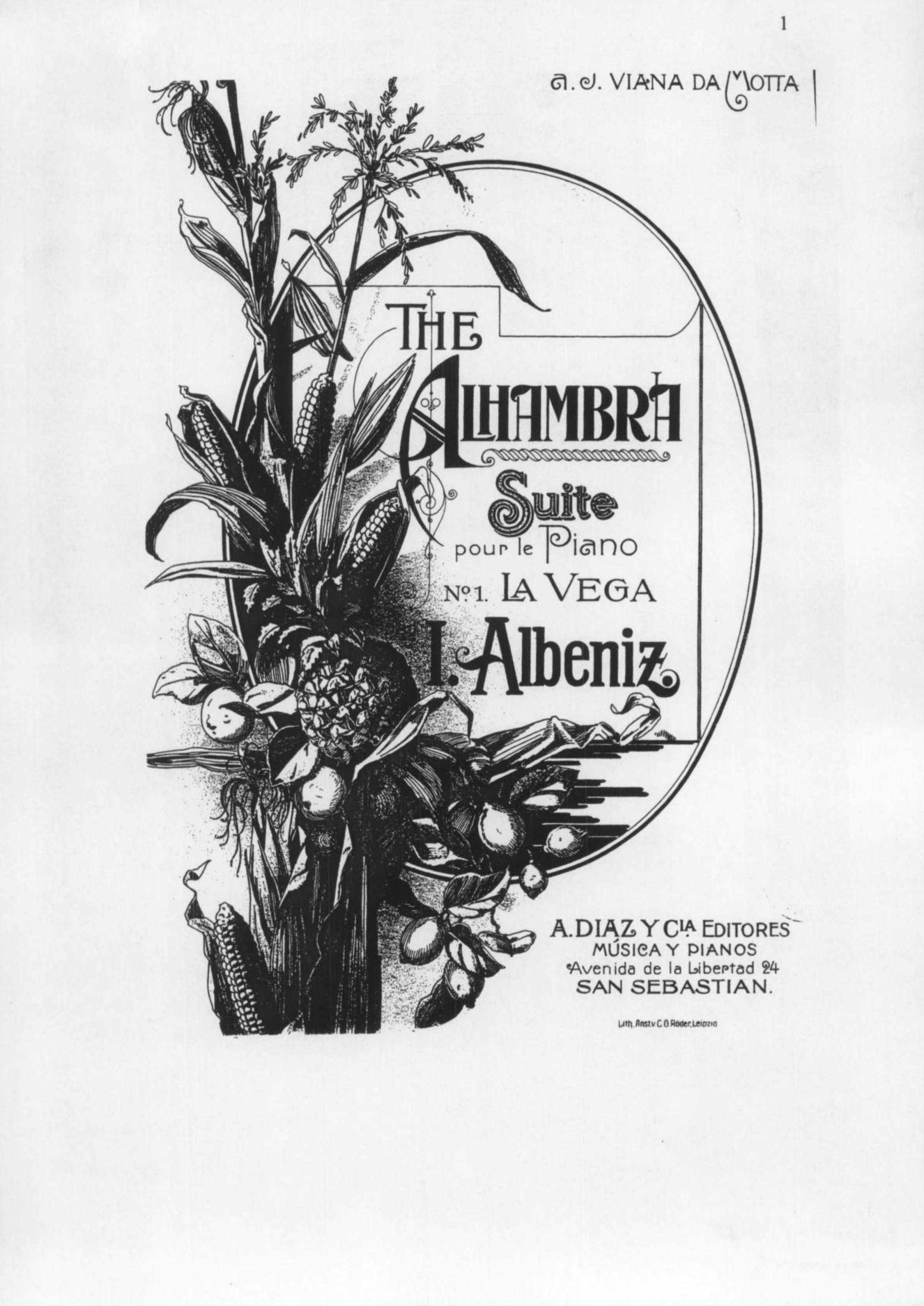 Money-Coutts’s poem sings of the beauty of the landscape around Granada, the foothills of the Sierra Nevada, and the supernatural apparition of the Alhambra. Here are its original lines:

Granada.
O Land of flowers and sapphire skies
Where seraphs walk in sweet disguise
Of earthly maidens’ vesture!
Meseems thou keepest in thine eyes
The first, vast virginal surprise
Of God’s creative gesture!
The Angel of Art has sealed on thee
His signet and his sign,
The Alhambra! Like a phantasie,
Half human, half divine!
A marble fountain! Ocean shell!
Or flame, that coils and spires!
A perfect thought! As who should tell,
In one, the world’s desires!
Most gorgeous Word of blazoned Art,
In whose eternal scroll
The student who can read a part
Is master of the whole!

Are you now infected by wanderlust?  Then take a look at the following wonderful photography and listen to this concert recording by Arcadi Volodos. Granted the tone quality leaves something to be desired, but the atmosphere is quite simply breathtaking. If you want something “more proper”, here is Alicia de Larrocha’s recording. 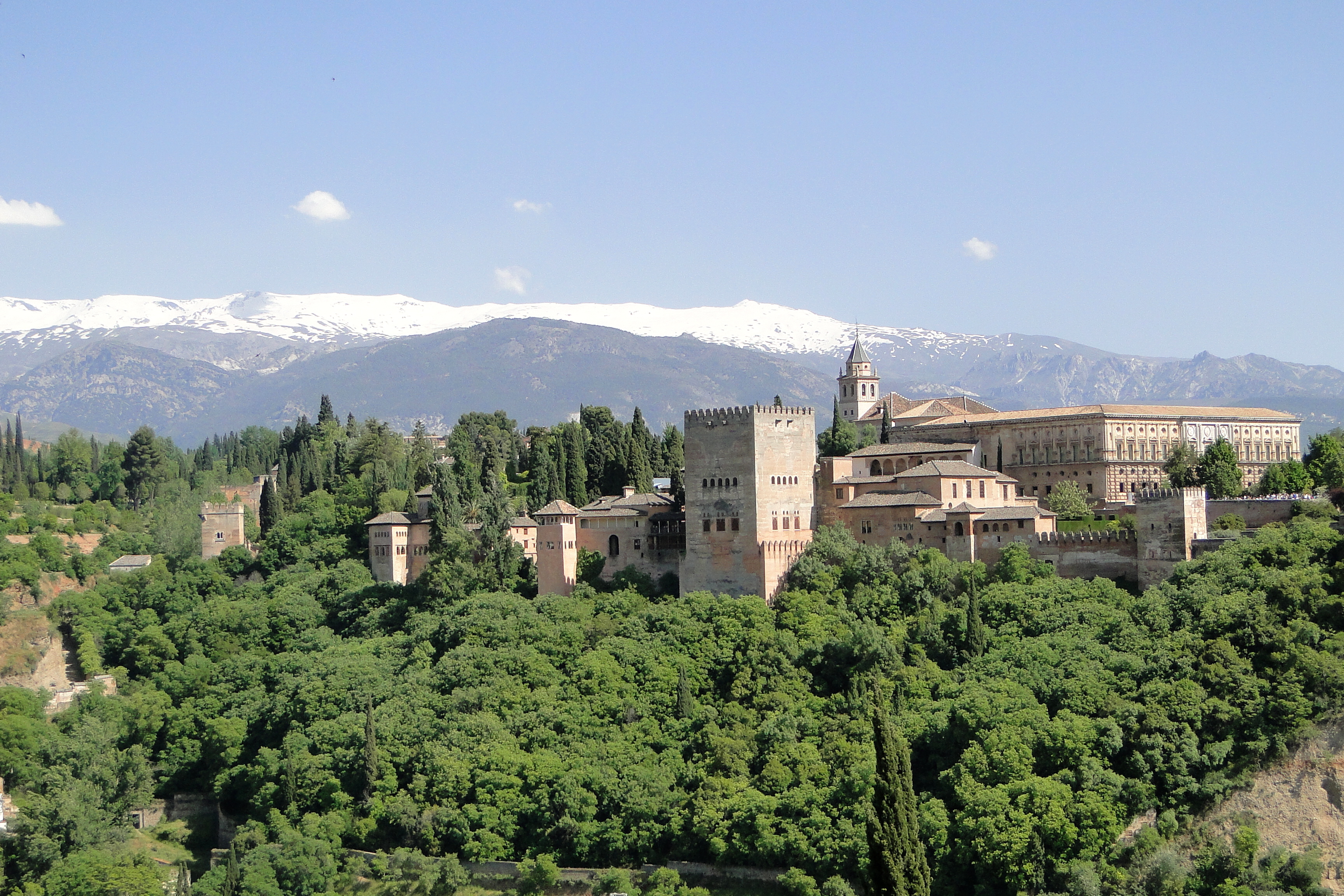 Milton Rubén Laufer, the editor of our Urtext edition, professional pianist and musicologist, made La Vega the topic of his dissertation that appeared in 2003 (readily accessible here), to which this blog posting is also indebted. In his work, he scrupulously treated the genesis history of the piece. Amongst other things, he presented the composer’s efforts to give the work its ultimate form. For in the autograph Albéniz deleted the original five-page conclusion soon after writing it down, adding instead a repeat of the first six and a half pages of the manuscript and finally a new closing that is once again seven pages long. As a result, La Vega grew in length from its original 18 pages to 28 pages (our edition reproduces the original ending in the appendix). 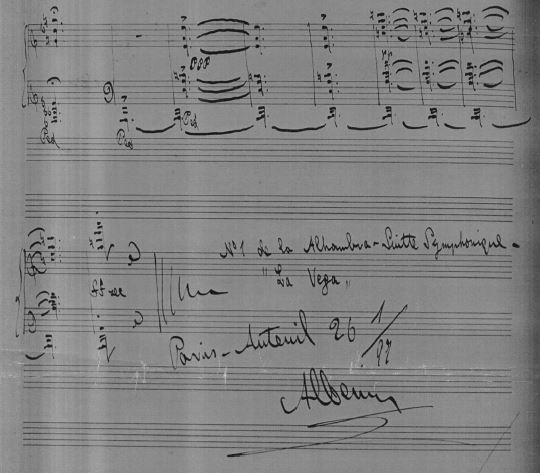 All this occurred in the first months of 1897. It was not until 1908 – after the Iberia Suite had already appeared and shortly before the composer’s death – that the first edition followed, published by the Spanish publisher A. Díaz y Cía in San Sebastián. This shows some considerable differences from Albéniz’s manuscript; unfortunately, it is not clear to date whether these changes go back to the composer or were initiated by someone else (in our edition we reproduce in footnotes the autograph’s differences). It is also not completely clear why the Edition Mutuelle publishing house, which had acquired the printing plates after the original publishing business had closed down, brought out between 1910 and 1913 a new edition of La Vega, differing in 500 places from the first edition. Unless Albéniz left behind records documenting a further revision of the piece, we can probably then surmise that these alterations were no longer authorised by the now-deceased composer. So, surrounding the music text is an aura of mystery, much like the breathtaking landscape that was the source of inspiration for this little masterpiece.

4 Responses to »La Vega – The fertile plain: Isaac Albeniz’s homage to Granada and the foothills of the Sierra Nevada«