At the beginning of the year I reported on my work on the two Scherzi nos. 2 & 3 by Frédéric Chopin. Even then I could announce that episode 4 would not be long in coming – and now I am keeping my promise! The revised E-major Scherzo op. 54 will soon be published, followed by a complete revised volume of all four of Frédéric Chopin’s Scherzi.

The fourth Scherzo is in no way inferior to its three sister works in complexity of source material. “Technically, a source nightmare!” was the apt opinion of a colleague who reviewed my edition. At first glance, the source situation looks almost innocuous: Extant are three first editions, the French (FF in two issues), the German (FG) and the English (FE). In addition, there is an autograph that I have dubbed AG, because it was the engraver’s model for the German first edition. This is what the stemma looks like: 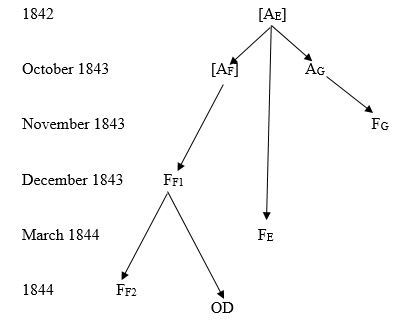 Complicating matters are especially the sources that did not survive, thus shown here in square brackets [ ]. Some will ask – rightly – how it is that besides the autograph AG I still must posit two other lost autographs. Well, there is first of all the source finding: The three first editions differ so much from each other that it is reasonable to assume three different engraver’s models. This surmise is corroborated by letters that Chopin sent friends in Paris from George Sand’s country estate Nohant in the fall of 1843. Here, he asks them to have two of the just-completed autographs (sources AE and AG) forwarded to the English publisher, for one, and to the German publisher, for the other. It is not documented, though highly likely that he wrote another autograph for the French first publisher (source AF) and had perhaps already submitted it personally in the summer.

Three autographs functioning as models for three first editions – that leads to three authorised versions of the same work if the composer does not ensure that the three autographs are congruent (which Chopin did not do!).

That nevertheless the three autographs are still interdependent in terms of source history can be demonstrated by the correction process to be observed in AG. This is particularly clear in mm. 365–368. Here, the English first edition notates the final two ascending notes, respectively, a third lower than we are used to from modern editions, thus

‘A classic mistake involving a third, frequently occurring in music engraving,’ I thought at first. If you look closely, though, you can see that originally Chopin also wanted to notate this “easier” variant in AG. At least it can be seen in the right hand of mm. 365/366. If we follow this link, we see the place in the autograph and subsequently in the various first editions, the English one being at the bottom. Chopin at first attempted to make the correction in the autograph on the spot, meticulously deleting the entire bar in the upper stave and rewriting it above – now in the ultimate version. This correction process shows that here the English first edition gives a new version that was corrected in the extant autograph. So, the English first edition and the autograph [AE] underlying it must have originated earlier than AG. Whereas the French first edition gives the post-correction version. There are numerous other places in the fourth Scherzo where we can make similar observations – and based on this, reconstruct the dependencies and chronology, as represented above in the stemma.

Apropos chronology: What happened after Chopin had submitted the autographs to his publishers? He usually did not bother about publications in Germany and England. But he probably did supervise the French first editions. He mostly proofread one galley proof, which presumably also applies to the fourth Scherzo. In any case, to be found in FF are quite a number of dynamic markings lacking in the other first editions. They could actually come from the composer, and there are some indications that he did not add them in [AF], but in FF. The French first edition is thus the definitive version. 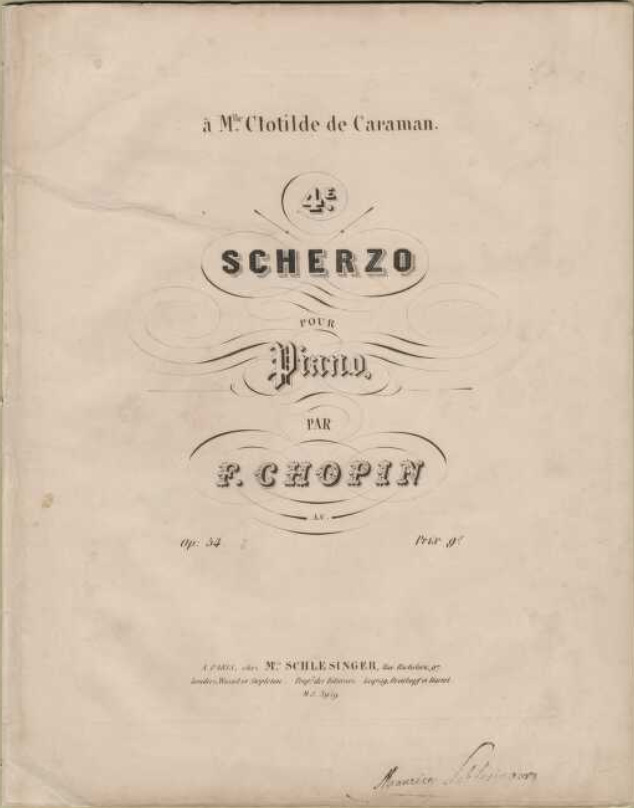 Nevertheless, FF is not the main source for my edition. Why not? Very simple: It is full of errors. Amazingly enough, Chopin did not have these errors corrected, and in even the second issue of the French print, only a handful of obvious engraving errors are corrected – FF remains very unreliable in detail, and that also goes for the source “OD”, an exemplar of FF1, from which Chopin taught his student Camille O’Meara-Dubois, but there practically nothing is corrected.

In order to find a main source suitable for the edition, I had to go “way up” in the stemma: FF1/FF2/OD were eliminated as too error-ridden, FE and FG were not proofread by Chopin – remaining finally was only AG, the autograph engraver’s model for the German first edition. Doing this goes against the grain for us Urtext editors, because for the definitive version we are always looking for the most recent source. AG as main source is, however, by no means a bad choice: The autograph is notated extremely carefully and passes the fourth Scherzo on in an undoubtedly authorised form. The challenge was to document adequately the readings of the two other traditional lineages, FE and FF, also containing authorised readings. As described in episodes 1 and 2 & 3 of my series on the Chopin Scherzi, footnotes and a detailed Critical Report are used to include these variants.

Now in conclusion, still some “music”: Two accolades from my engraver’s model of the 4th Scherzo, tucked into which are two problematic text passages:

The old Henle edition had d sharp2 instead of f sharp2 in m. 263. This reading comes from the English first edition, though the parallel place, m. 863, has f sharp2. The rest of the sources clearly give f sharp2 at both places. The Mikuli edition, however, writes d sharp2 at both places, presumably to align it with mm. 255/855. But isn’t it much more appealing to play d sharp2 in mm. 255/855, and f sharp2 in mm. 263/863? Three measures later is a new variant: a sharp2 in the right hand not only in the old Henle edition, but also in the French and English first editions. This agrees with the a sharp1 in mm. 250, 258, but it is not in the autograph. And aren’t there reasons for the autograph reading of b1? The upper voice b2 differs from mm. 250, 258. Can’t that be an argument for the difference also in the lower voice? Chopin specialists would also be advised to look at the parallel passage, m. 866 (in the context of the previous measures). Here, there are also differences from the schema, causing me to follow the autograph reading b1 – the previously known a sharp1 will, of course, be included in a footnote to the edition. Do you have any objections? Then, please, do write me about them!

But now, real music: After so many complicated text details, relax now with Daniil Trifonov’s wonderful recording of the 4th Scherzo.

One Response to »Confusion about Chopin’s Scherzi – episode 4«