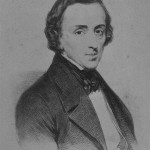 What a liberating, even redemptive impact that the unexpected major third closing a piece in the minor can have, is known above all to those of us who play and listen to Bach. To give just one example that everyone would know: The strictly and relentlessly advancing c-minor prelude from the first volume of the “Well-Tempered Clavier” bursts into bloom on the very last beat with a wonderful C-major triad. (Also, my favourite Bach prelude, the one in f-sharp minor, ending in F-sharp major, from the second volume.) “Picardy” is what Rousseau calls such a kind of replacement of the third at the end of a minor piece.

In the post-Bach period, this powerful composer’s “trick” becomes ever rarer. Minor stays implacably minor (see, for example: Mozart’s Piano Fantasia in c minor).  Or, the Picardy third broadens out on a large scale to include the entire final movement of a symphony, occurring, for example, as is well known, in Beethoven’s “Fate” Symphony No. 5 in c minor: From the night to the light….

In the case of Frédéric Chopin’s piano music, the Picardy third is encountered occasionally, though by no means frequently. When, just a few days ago, I was asked to judge the piano playing of more than 100 children, along with piano professors Michael Schäfer and Claudius Tanski, as part of our publishing-house’s annual YouTube piano competition, a lively discussion suddenly got started about the right ending of the world-famous Nocturne in c-sharp minor, op. posth. (KK IVa No. 16). Many of the young artists had selected this piece from the annual mandatory volume “At the piano | Chopin”. This incredibly sad piece became “world-famous” from the shattering movie “The Pianist” by Roman Polanski.

Some children played the major third (with e sharp) only at the very end (in the penultimate measure 61), in the somewhat dying-away light of the triple pianissimo. With great effect. Others played the major third already from measure 59 – also with good effect, but giving less the impression of “redemption”. There, we in the jury were in agreement: The Picardy third only at the very end does give the stronger impact. But the e sharp comes in the Henle edition already in measure 59. An error?

Thanks to being immediately able to consult the Henle editorial staff and our comprehensive source collection, the already surmised music/sources issue was quickly resolved. “Both” versions are legitimate. In the Henle Urtext edition of all Chopin’s Nocturnes, both versions are therefore even published (nos. 20a / 20b), in the series “At the piano | Chopin”, but only the version coming down to us from Chopin’s sister Ludwika Jędrzejewicz. She writes e sharp with the accidental ♯ already in measure 59, then not (!) in measure 60, but then again in measure 61:

Ludwika’s model was evidently Chopin’s fair-copy autograph of the final, revised version. But just that is unfortunately lost. Ludwika is considered a reliable copyist (and has rendered her brother’s unpublished estate an infinitely well-deserved service). In addition, another copyist, that is, Oskar Kolberg, copied Chopin’s lost autograph. And in his copy the Picardy e sharp comes only at the end. Implication: either the sister or Kolberg is wrong. So, 1:1. But Chopin had first of all drafted his c-sharp minor nocturne before making his fair copy, and this autograph draft has survived (and was published in 2003 in a beautiful facsimile by the Chopin and George Sand Museum on Majorca) – and there in the closing measure of this autograph clearly comes the # sign, ultimately more convincing to me and my jury colleagues:

The Henle editor (Ewald Zimmermann) does not want to decide the issue (“must remain open”) and simply prints both versions. Jan Ekier, in his edition for the Wiener Urtext (UT 50065), edits the ♯ only in measure 61 and comments on the earlier, sisterly major as “presumably a mistake since ♯ is missing in bar 60”.

Incidentally, the Henle YouTube jury was so touched by the very mature interpretation of nine-year-old Elina Baron that we unanimously awarded her the first prize in age group II. You certainly must hear the young artist with the c-sharp Nocturne; if you, dear readers, listen to the 4:30 minutes all the way to the end, then you will also know where Elina plays the immensely touching e sharp: