Moscow, St. Petersburg, Rostov-on-Don, Saratov, Smolensk, Voronezh – what do these Russian cities have in common? No, these are not venues of the World Cup, just starting in Russia…

The answer is perhaps rather less spectacular: Sergei Rach­maninoff visited all these places at the end of 1913 during a concert tour through the Russian Empire, where he gave piano evenings with his own compositions in a total of 24 cities from the beginning of October to the beginning of December.

This is now of interest to us, for Rachmaninoff had recently completed his great Piano Sonata no. 2 in B-flat minor op. 36, certainly one of the landmark works in his oeuvre, much loved and played to this day (and finally available in Henle-Urtext within the next few weeks!). All through 1913 Rachmaninoff had worked on this composition, completing it on 18 September, according to the date on the last page of the autograph. (In a list of works compiled in 1917, however, Rachmaninoff noted – though perhaps inaccurately from memory – the genesis period of the second sonata as “January–August 1913”.)

Rachmaninoff obviously introduced his brand new composition to audiences in the concerts mentioned on this Russia tour – but just where initially, for weren’t his programmes identical each evening? Which city can actually lay claim to the highly personal honour of hosting the composer premièring his 2nd sonata? 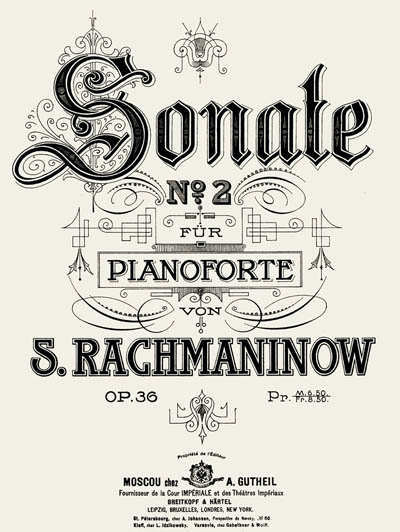 I came across this interesting question as part of work on my new edition of the sonata. Found as a rule in the Rachmaninoff literature of the West is the information that the première of the sonata op. 36 took place in Moscow on 3 December 1913 (dated according to the Russian calendar, which corresponds to 16 December in the Gregorian calendar of the West). This première date can be found, for example, in the important Rachmaninoff biographies by Max Harrison (Rachmaninoff. Life, Works, Recordings, London/New York, 2005, p. 194) and by Geoffrey Norris (Rachmaninoff, New York, 1994, p. 171). The works’ catalogue by Robert Threlfall and Geoffrey Norris (A Catalogue of the Compositions of S. Rachmaninoff, London, 1982, p. 115) also mentions the same date, but is at least still cautious enough to speak only of a “performance”, not of the “first performance”.

Kim Andrei Lasarenko, on the other hand, in his dissertation (A Style Change in Rach­maninoff’s Piano Music as Seen in the Second Piano Sonata in B-Flat Minor, Opus 36 (1913 and 1931 Versions), Ohio State University, 1988, p. 16), gives St. Petersburg as the première’s location, but as its date only “in December”; his source is George Kehler’s compendium The Piano in Concert. Lasarenko’s dating is also adopted by the English Wikipedia entry for the sonata (status, 18 June 2018).

Unfortunately, these Western publications do not take note of the long known results of Russian music research, providing detailed information on this and many other questions about Rachmaninoff’s biography. So, there are also detailed tables with dates of concerts and performances of works in the three-volume text and materials collection edited by Zarui Apetjan, S. Rachmaninow. Literaturnoe nasledie (= “Literary Estate”, Moscow, 1978–1980). We can gather from these that the première of the sonata op. 36 already took place on 5 October 1913 (Russian calendar) in the Nobility’s Assembly Hall in Kursk, i.e., in the first concert venue of Rachmaninoff’s tour (cf. Literaturnoe nasledie, vol. 2, p. 396, and vol. 3, p. 443). Only a few weeks later the composer also played his sonata in St. Petersburg and in Moscow at the close of the tour.

Henle editors are, however, not accustomed to accepting information unchecked, and so I searched for specific contemporary evidence that the op. 36 sonata was indeed actually played in Kursk. Fortunately, in Russian libraries I was able to locate copies and obtain reproductions of Kursk’s local newspapers from 1913. To my great joy, Rachmaninoff’s name jumped off the title page of the daily newspaper for 5 October 1913… 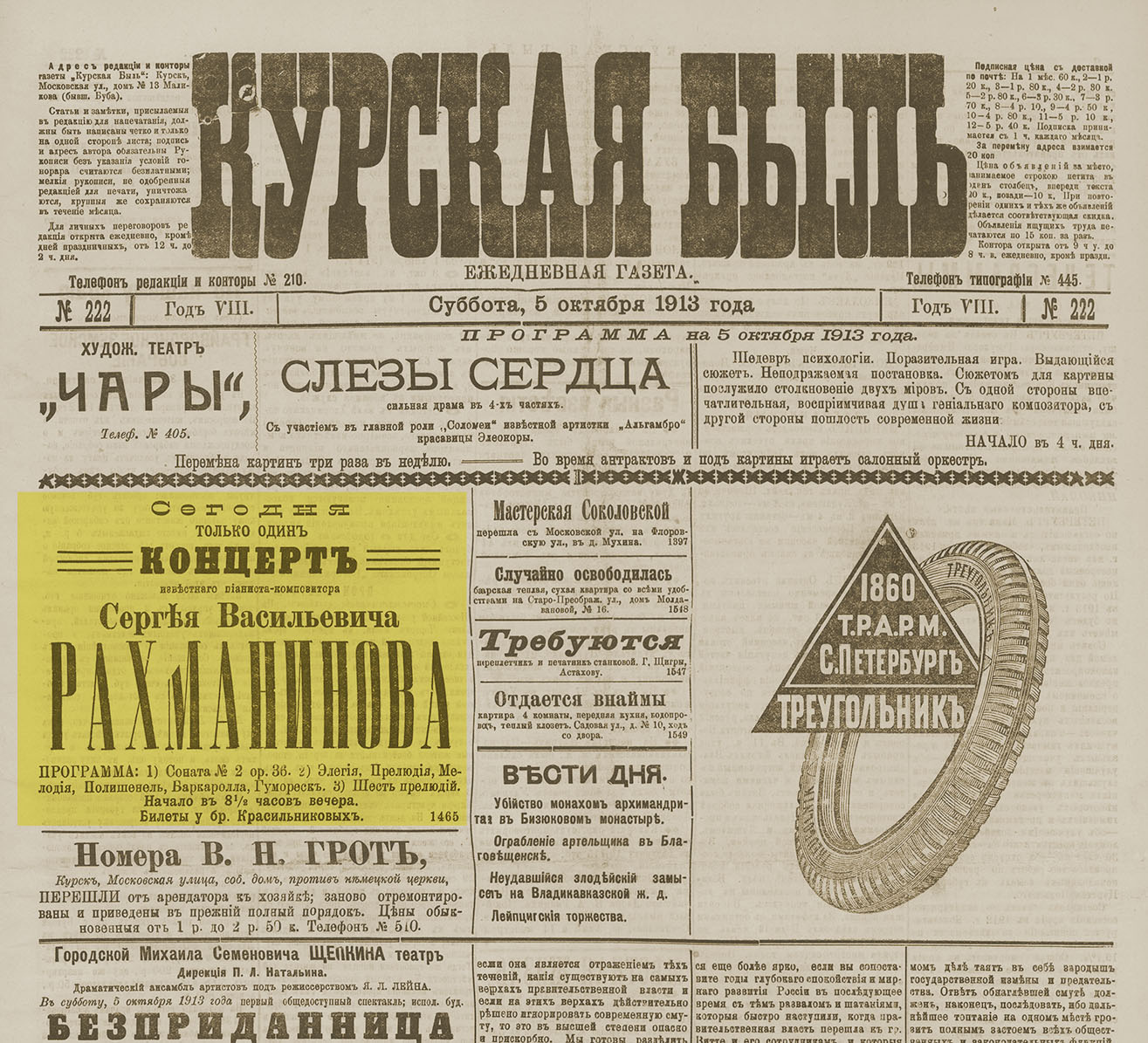 Kurskaja Byl’, 5 October 1913. Announcement of Rachmaninoff’s concert the same evening, with the piano sonata op. 36, on the programme, amongst other things.

A concert review in the same newspaper on 8 Octo­ber 1913 then gave me ultimate certainty, proving that the sonata was not only announced, but actually performed.

So, the Moscow and St. Petersburg metropolises were not once the site of an important musical event, but the industrial city of Kursk, located about 500 km south of Moscow. Realising the correct première date and location for the sonata op. 36 is certainly not earth-shattering, but in such an important work of piano literature, we must be a little more meticulous when it comes to details – not only in editing the score…

Incidentally: The 1931 version of the sonata revised by Rachmaninoff (also completely included, of course, in our edition) was first presented by the composer at a piano evening in Portland (Maine) on 10 December 1931 (cf. Literaturnoe nasledie, vol. 2, pp. 530 and 536). Here, too, Rachmaninoff first tried the work out in the hinterland before performing the sonata two days later in New York.

And discussing the two different versions of the sonata will be the topic of my next blog posting.