There could not be a bigger difference: When you are preparing to edit a work of the Classical and Romantic greats, you can rely on an abundance of information from a sea of scholarly literature. When you turn to composers still long enshrined in the repertoire by only a few works or even a single work, you are often faced with – nothing! Rodolphe Kreutzer is nearly just such a case.

It is certainly amazing.  Especially since it has to do with the still most important etudes of violin study worldwide. Searching for details on its origin, you almost immediately come across very conflicting information, whether it be in the only monograph of the 21st century on Kreutzer’s early career (written by Ingrid Isola, published in 2010), or in one of the editions described as “Urtext”, though making available neither a critical apparatus nor getting to the bottom of several fundamental questions. And coincidently, you find that the innumerable editions of the last 150 years have in part greatly supplemented and altered the published text supposedly authorised by Kreutzer, without any transparency in regards to the original.

Here is an example to illustrate this – the opening of the first etude as given in the first edition:

And here are the same measures in the currently established editions edited by Davisson and Galamian:

And now an additional surprise: If all had gone according to Kreutzer’s will, this etude would no longer have been taught at all today. For he discarded it in revising a later edition of his etudes!

But let’s take one thing at a time.

1) When did the first edition appear?

A glance at the encyclopaedic standard musicological works, The New Grove (2001), and Musik in Geschichte und Gegenwart (2003), seems to answer this question quickly and clearly: the etudes appeared in 1796, according to these, though indicated by Grove was the fact that “the additional two may not be Kreutzer’s”, since the first edition includes only 40 etudes (more on this below).

As it turns out, the dating in both cases is based on an entry in Ernst Ludwig Gerber’s Neues historisch-biographisches Lexikon der Tonkünstler, part 3, 1813. He refers there to “Etude de Violon, ou Caprices. Recueil 1. et 2. Paris, b. Imbault, auch [also] Offenbach, 1796”.

Obviously not realised is that this evidence relates to another publication, namely, to two prints with six and twelve etudes, respectively, still published in Paris before 1800 by Cochet (not Imbault), and has nothing to do with the now famous 42 etudes. 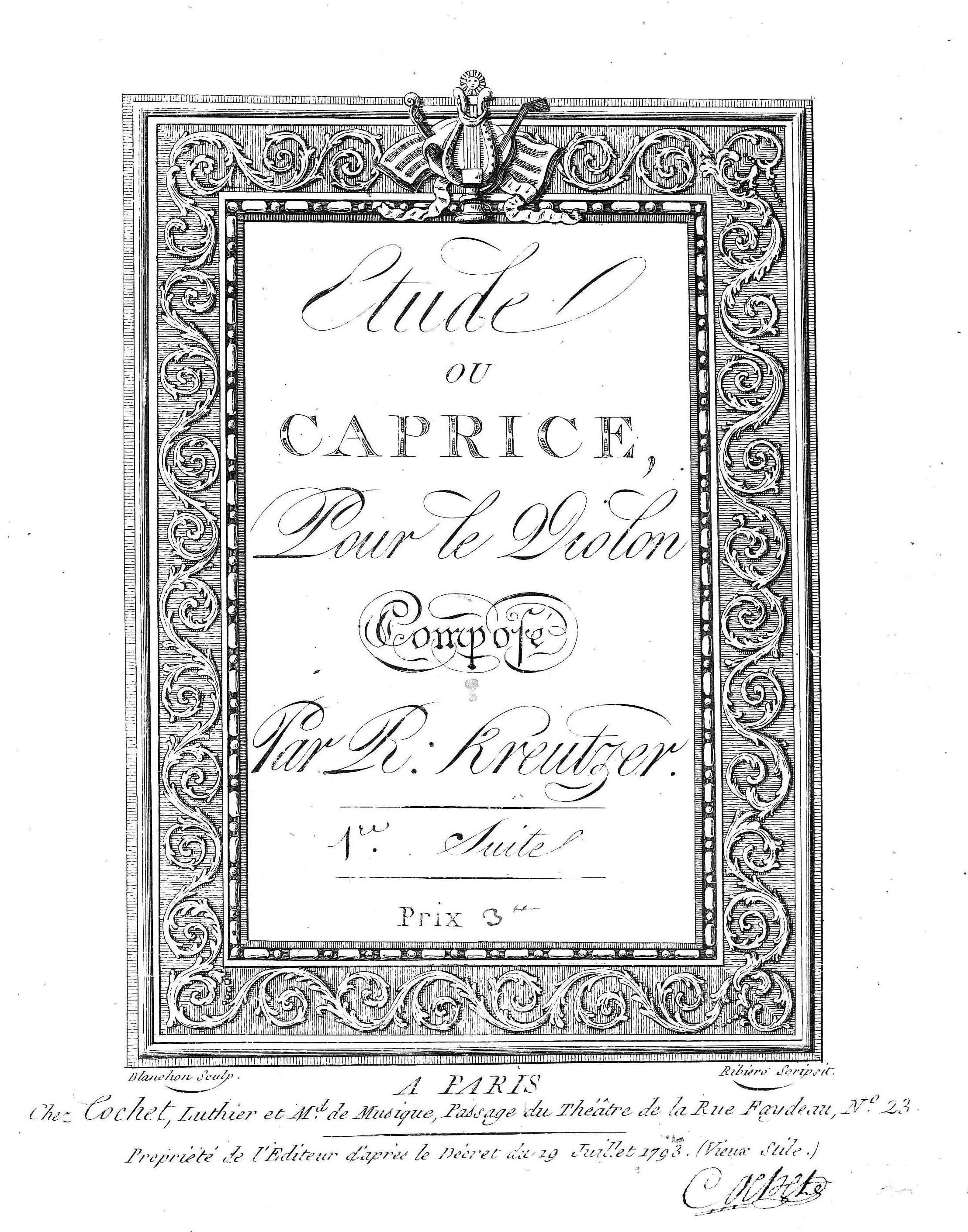 This fact has been known ever since Ingrid Isola’s work of 2003, Die Violinetüden von Kreutzer, Fiorillo und Rode. Nevertheless, the wrong date is still to be found in new editions of the etudes coming, for example, from 2010.

A close look at the title page of the first edition with the help of an established bibliographical resource (Devriès/Lesure, Dictionnaire des éditeurs de musique français), reveals the publication date. 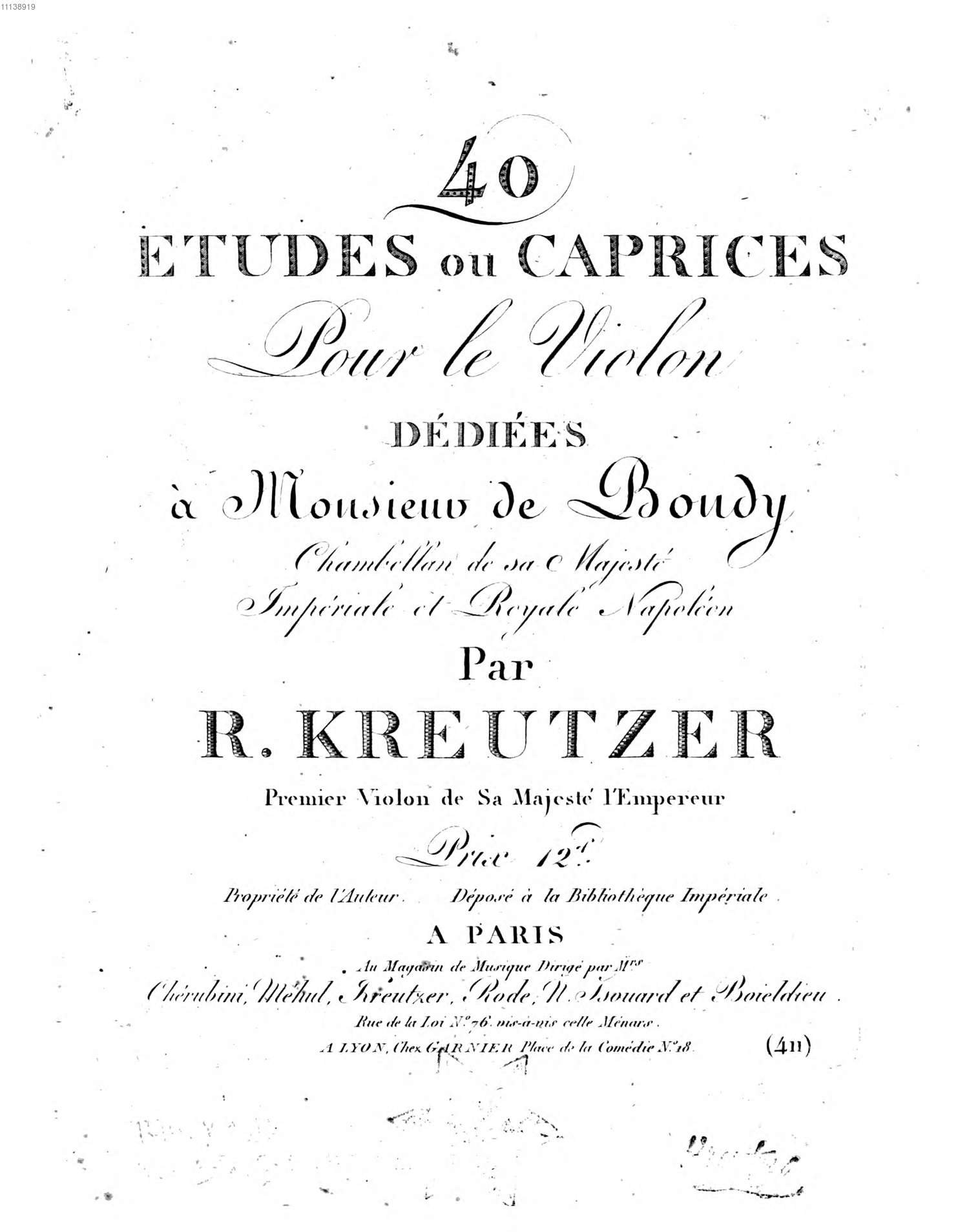 The publishing-house number 411 establishes the year 1805, the publishing-house address “Rue de La Loi”, renamed Rue de Richelieu in February 1806, supports this date. The references “Propriété de l’Auteur” and “Déposé à la Bibliothèque Impériale” leave no doubt that this is the first publication, appearing in the publishing house “Magasin de Musique dirigé par Mrs Cherubini, Méhul, Kreutzer, Rode, N. Isouard et Boieldieu”, founded in 1802 by Kreutzer himself, amongst others. A reference to the publication year 1805/1806 for our (still) 40 Kreutzer etudes is also to be found, appropriately enough, in the so-called Intelligenzblatt (an advertising appendix) to the Allgemeine musikalische Zeitung of January 1806 under the heading “Neue Musikalien von verschiedenen Verlegern, welche bei Breitkopf und Härtel zu haben sind” [New Music by Various Publishers, to be had from Breitkopf and Härtel].

The first edition of the etudes now identified as from 1805/06 includes, according to the title page, simply 40 pieces. “Lacking” are etudes nos. 13 (so-numbered by Galamian/Flesch, no. 14 according to Davisson) and 25. Where did they come from?

Various conjectures about this are to be found in the literature. The New Grove leaves it open, stating only, as disclosed above, that they might not be by Kreutzer. It sounds more definitive in The Strad 112 of 2001: “The first edition contains only 40 studies, nos. 13 and 25 in later editions are not by Kreutzer, but were added c. 1850 by an anonymous French reviser.” (This statement is also represented in a current “Urtext” edition.) This is contradicted by the presumably very first edition of 1831 to contain 42 etudes, edited by Alessandro Rolla. Stated there on the title page (original is in Italian) is: “New, edited edition supplemented by two unpublished studies by the same author”.

As it turns out, Rolla did indeed get closer to the truth, but only halfway. For both of the etudes are, in fact, authentic pieces composed by Kreutzer himself. But they did not remain unpublished until 1831, as Rolla claims, but saw the light of day in a first edition revised by Kreutzer himself that still appeared in print during his lifetime. 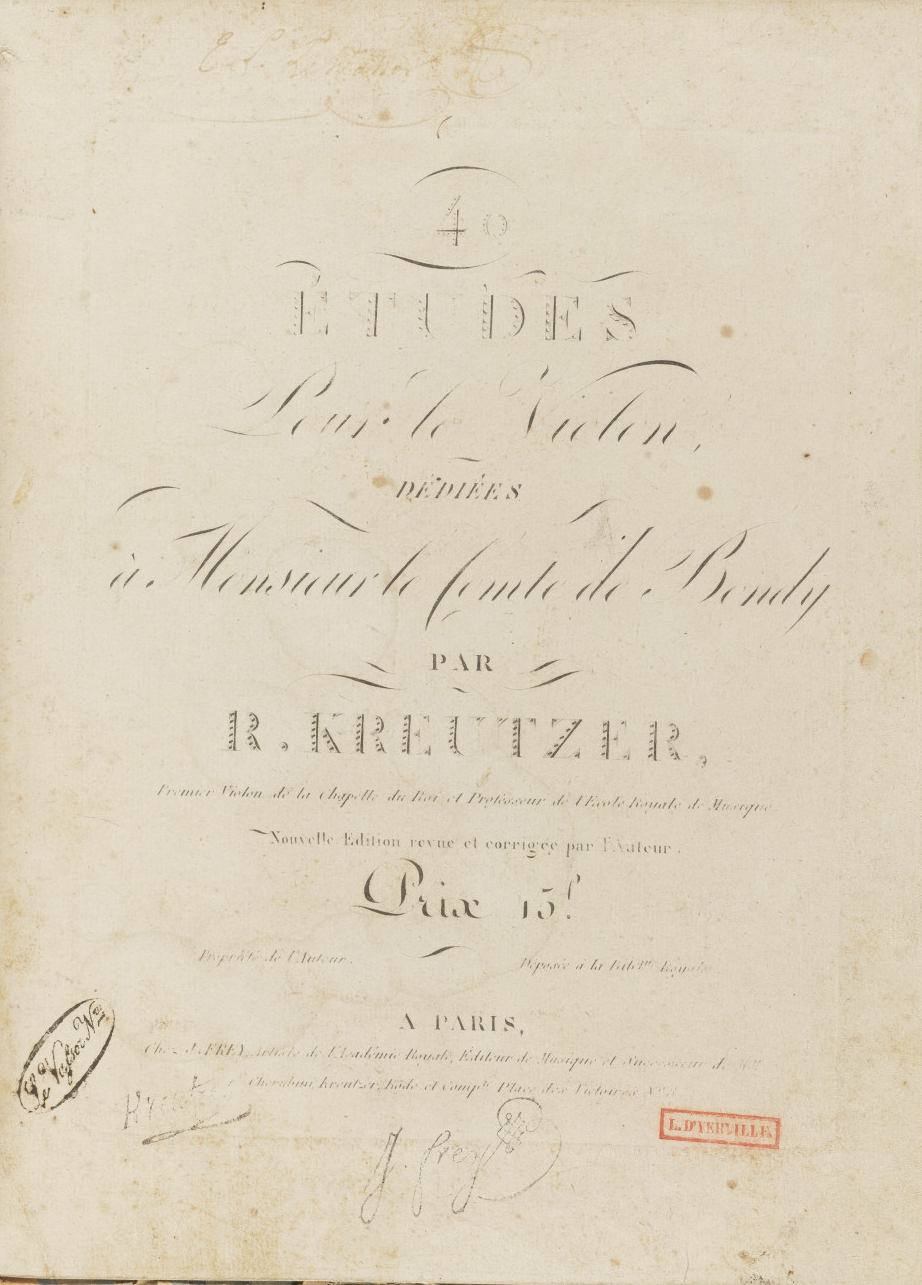 Titel page of the revised edition

But wait a moment, still only 40 etudes? Yes, for in this collection, “revue et corrigée par l’Auteur”, Kreutzer removed the pieces nos. 1 and 12 and added the nos. 13(/14) and 25 not present in the first edition

The revised edition of the etudes can still be verified today in only a single copy (do not trust the information in Worldcat or in the Karlsruhe Virtual Catalog!). It must hardly have been in circulation during the past two centuries. For although almost all new editions contain 42 etudes, especially in the 20th century, in most cases the music texts show the first-edition status (except, of course, for the two pieces added later).

The alterations and corrections that Kreutzer made in his revision were mostly ignored owing to lack of knowledge of this successor edition. These are in part fundamental alterations, such as a completely new version for etude no. 23. Kreutzer intervened in almost all of the etudes, whether by changing notes, bowing or fingerings or simplifying the notation in polyphonic pieces. Engraving errors in the first edition were corrected (and new errors were also unfortunately added).

There is no doubt that this revised edition, published in the 1820s, represents the final, authorised version from Kreutzer’s pen. It is all the more tragic that today the prevalent editions by Davisson and Galamian are still based on the first-edition text – or, as in the case of etude no. 22, on a version garbled from an early reprint. For Breitkopf & Härtel printed this etude in 1806 in its own edition, shortened by a total of 15 measures and with a different ending. That’s also exactly how it is still found today in most editions.

Time for a new Urtext edition? I certainly think so!

4 Responses to »40 or 42? Rodolphe Kreutzer’s Etudes as Urtext edition«