Posted on February 4, 2019 by Dominik Rahmer 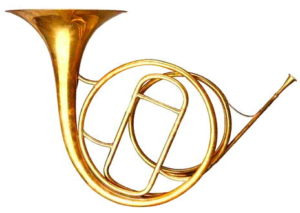 A few days ago a customer enquiry momentarily gave me pause: Whether our new edition of the Johannes Brahms Horn Trio in E-flat major op. 40 (HN 811) reproduced the first version of 1866 or the second version of 1891? But a later revision of a trio was done by Brahms for just the B-major Trio op. 8 – or has something else come up…?

To be on the safe side, I quickly looked at our edition of the Horn Trio (edited by Katharina Loose-Einfalt), which is based on the score and the state of research for the Johannes Brahms Gesamtausgabe [Complete Edition] and so guarantees the utmost reliability. As expected, neither there nor in the reference work on the Brahms oeuvre, the Thematisch-Bibliographisches Werkverzeichnis [Thematic-Bibliographic Catalogue] by Margit L. and Donald M. McCorkle, was there the slightest trace of a revised version or later revision.

The only “change” that Brahms ever made to the Horn Trio was the addition in 1884 of a viola part as another alternative to the horn part (in addition to the already existing alternative cello part). The original music remained, however, completely untouched. (Incidentally, for further in-depth details on the work’s genesis, you can freely view here the preface and critical report of our Urtext edition.)

But where did the information about a so-called second version of 1891 come from? Was it just a customer’s confusion of Opus 40 with Opus 8? As a matter of interest, I started a brief Google search and to my astonishment landed a hit on the English Wikipedia page. The relevant entry to the Horn Trio has it short and sweet: “Brahms revised the trio in 1891.” 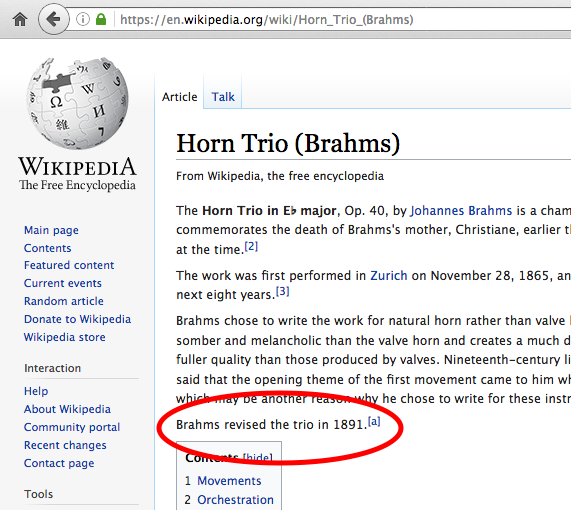 Wikipedia, screenshot as of February 1, 2019

Cited as the only evidence for this statement is the score in the Petrucci Library (IMSLP), with even its own subclass “2nd version (1891)”: 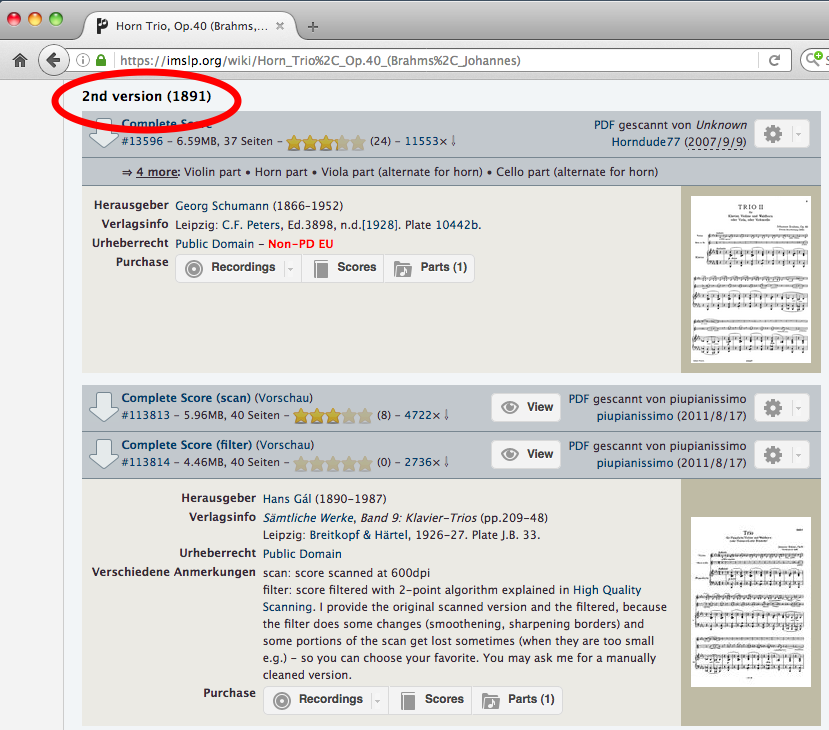 And this classification seems in turn to be based solely on the heading of the edition that Georg Schumann published for Edition Peters. Stated there is, in fact: “Zweite Bearbeitung [=Second arrangement] (1891)”. 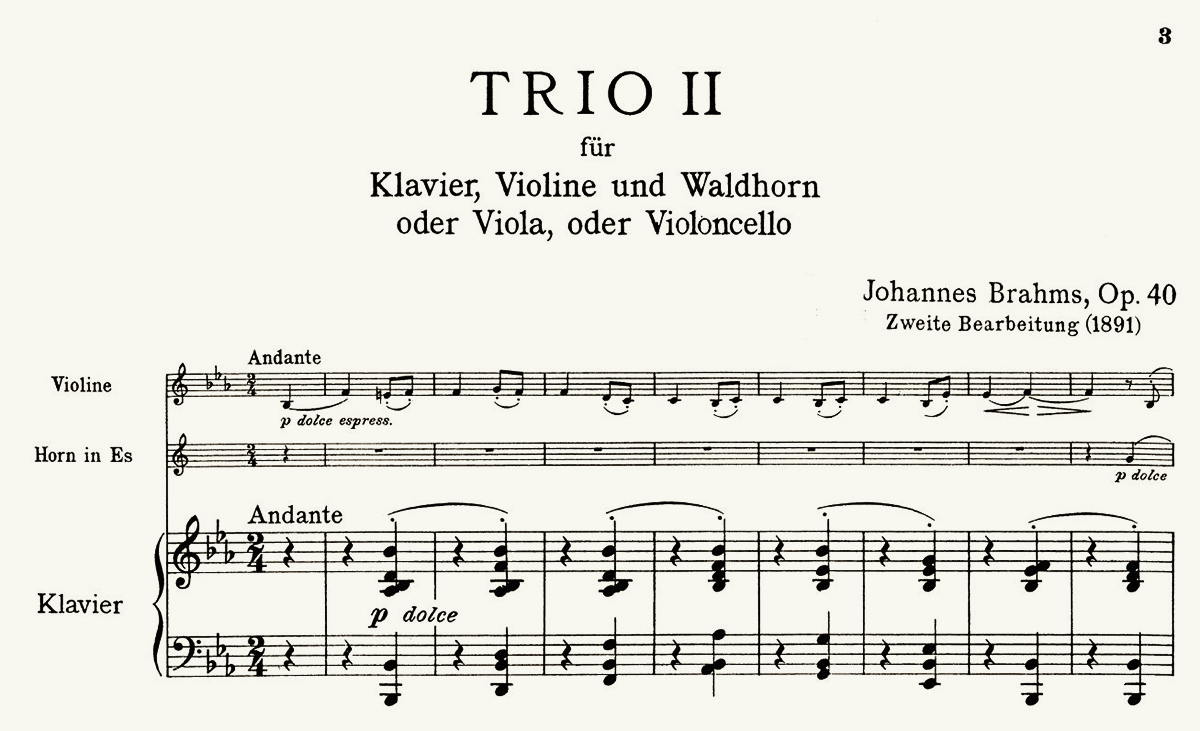 How could that be? Since I own the entire Peters volume of all the Brahms trios, I looked it up there and found no such indication, simply at the place in question, “Op. 40”, also without any composer specified: 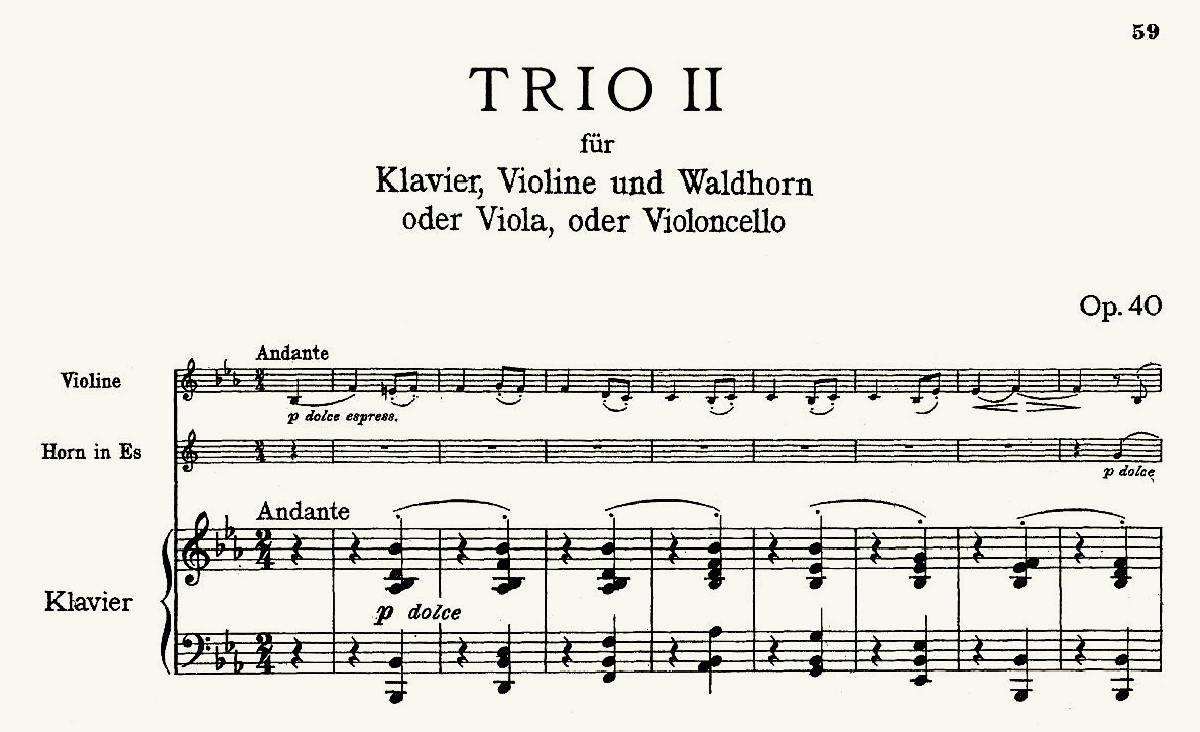 And then it dawned on me what may have happened: when Peters split up the entire volume of trios into separate editions, they had to add the composer’s name in the heading of each trio, since this indication was until then only given on the first page of music in Trio I: 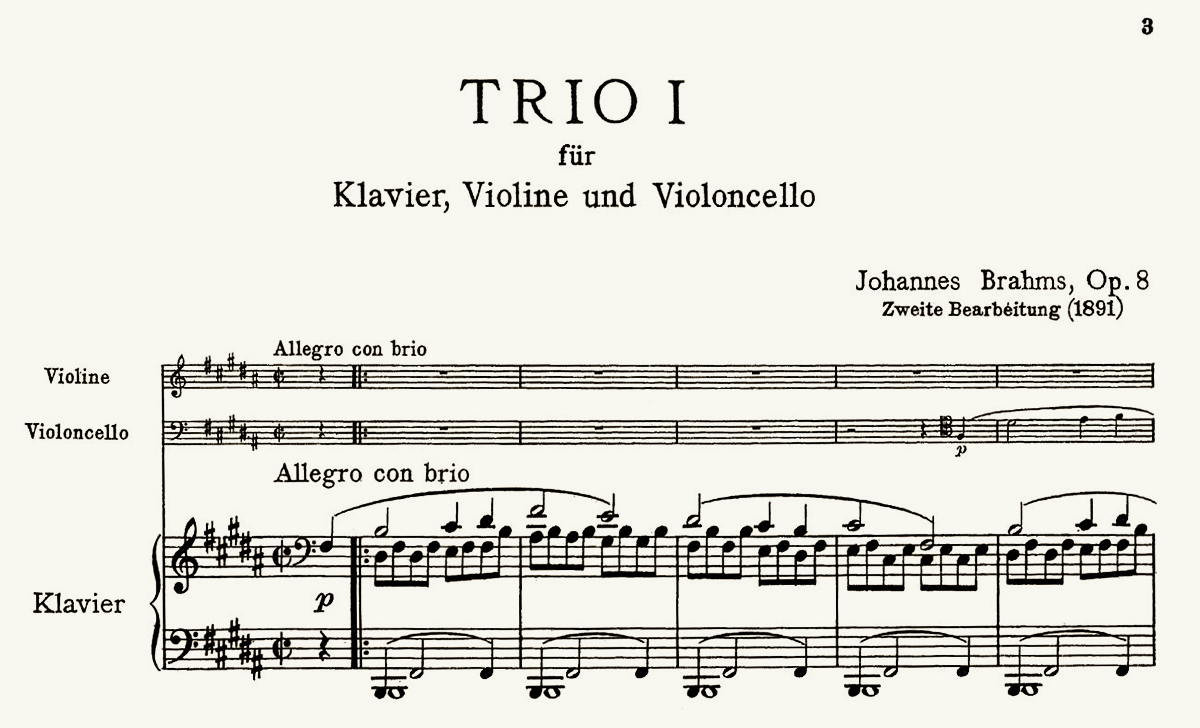 And in re-montaging the headings, also the indication “Second arrangement (1891)” was inadvertently adopted from Opus 8 for all the other trios – and erroneously added, in fact, also for the individual editions of Opp. 87, 101 and 114: 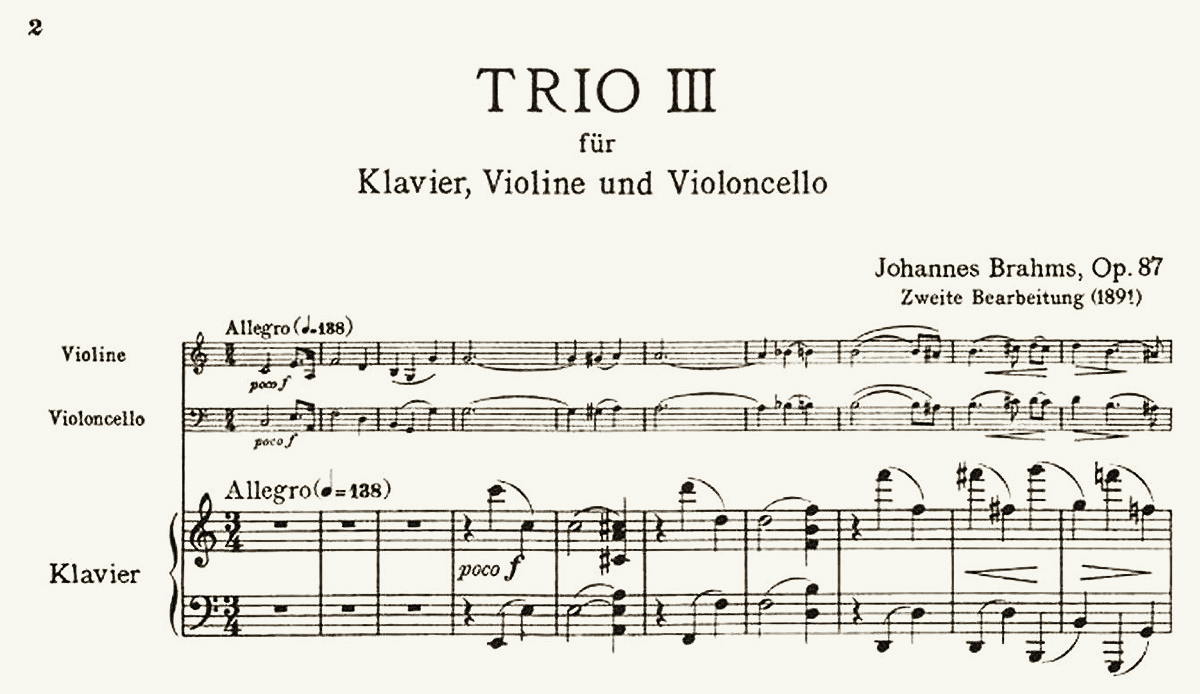 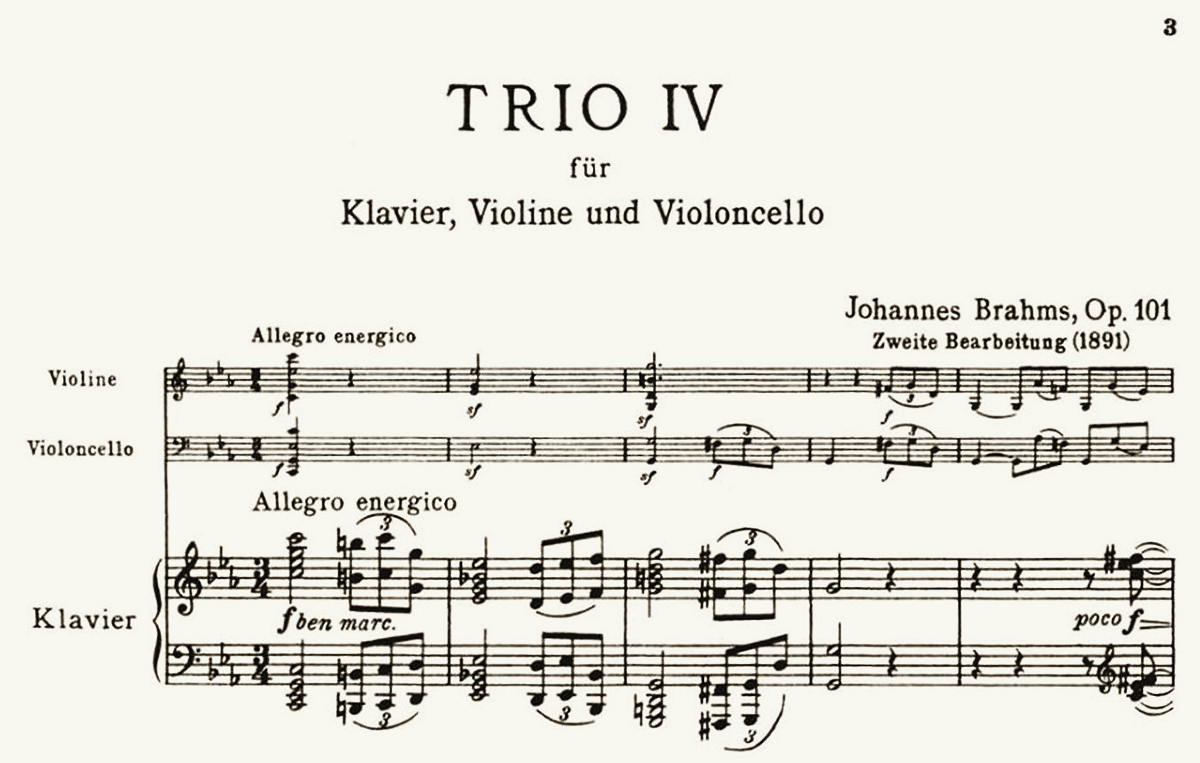 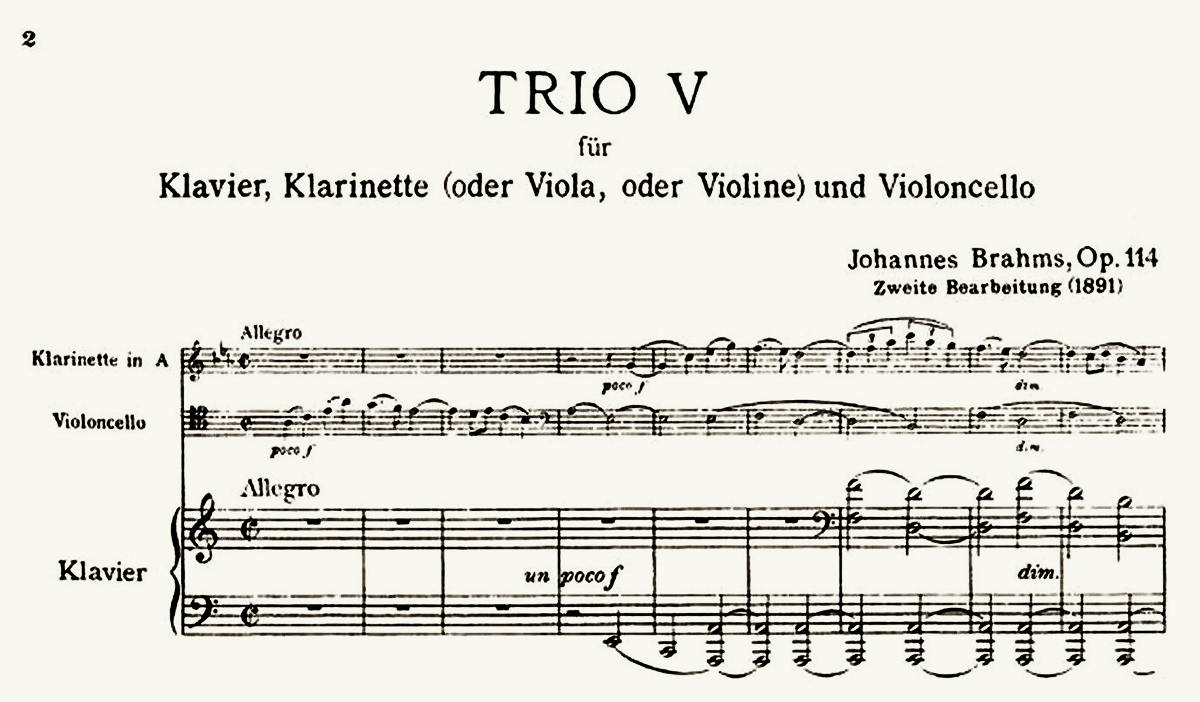 The Leipzig Peters colleagues will certainly have long since corrected this typographical mistake in later issues, but the Internet never forgets anything, and the Petrucci Library is notorious for rehashing old errors from age-old score editions… (See also this earlier blog post on Rachmaninoff’s Prélude in c-sharp minor.)

Of course, this “fake news” is rapidly spreading via such popular websites: for example, with YouTube recordings that reproduce this old score as a video for reading along with the performance.

But this should not stop you from ultimately enjoying this wonderful interpretation, for which, by the way, the horn player Teunis van der Zwart uses a natural horn instead of a modern valve horn – just as Brahms loved it and explicitly desired for his trio.

One Response to »Version alert! Or: Did Brahms ever revise his Horn Trio?«