Posted on February 18, 2019 by Annette Oppermann

Considering that specifically for 19th-century works the first edition is frequently the most important source for preparing the Urtext edition, we could pose the question of why we re-typeset our Urtexts at all – when the few errors there could often so easily be corrected by retouching the original print. But quite apart from the fact that in many cases the necessary corrections couldn’t sometimes even be realised at all within the original layout, the little word “modern” comes into play here, (also) to grace our Urtext editions.

For a modern Urtext edition offers not only a music text supported by the current state of research, but also one presented in a standardised editorial manner that is up to date. Schumann’s lieder albums provide an especially good example of this, for added to the purely musical notation is also a verbal text. The comparison of the 1840 first edition of Schumann’s Myrthen op. 25, published in Leipzig by Kistner, with our brand-new Urtext edition makes the differences immediately clear: 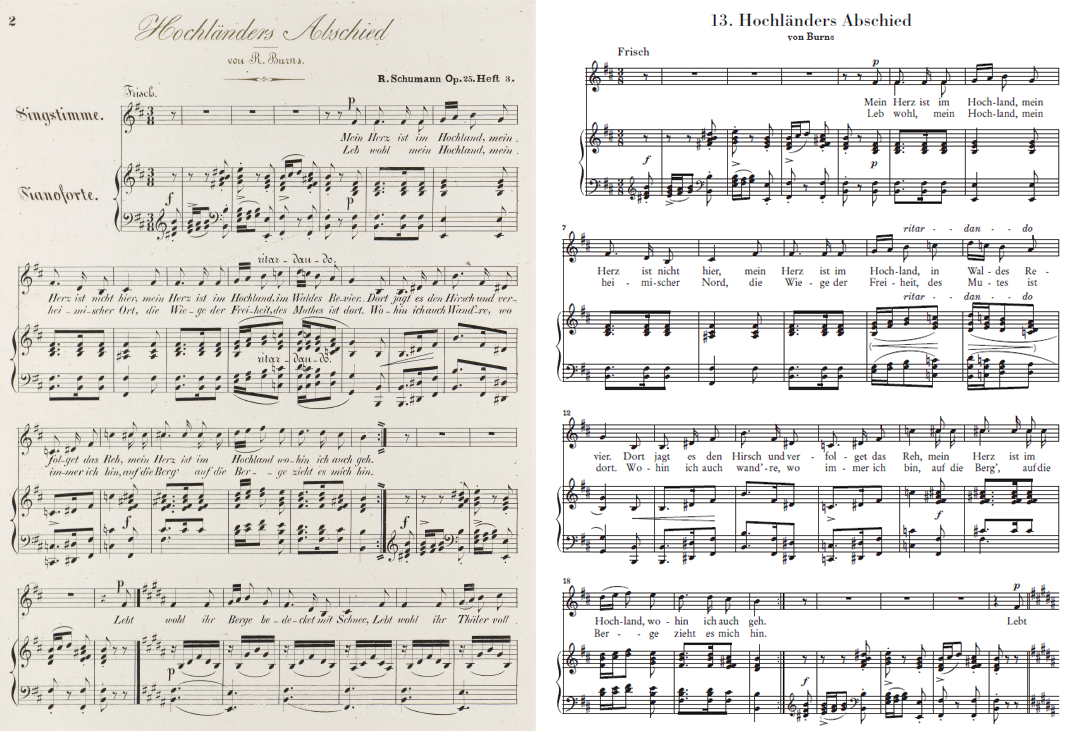 Besides correcting the first edition’s two veritable text errors in measures 8 (“Nord” instead of “Ort”) and 10 (“in” instead of “im”) our edition corrects the orthography (“wand’re” instead of “Wand’re”) and formatting (such as the consistent distinction between centered syllabic hyphens and the continuation dash at the end of a word). Other differences concern the customary spelling modernisation in today’s practical Urtext editions, for example, “Muthes” becomes “Mutes” in m. 11.

Hidden, though, behind this modernisation mentioned in only one sentence in the guidelines section “About this Edition”, are also always a few headaches, because of course these interventions – to improve readability – must not contradict Schumann’s compositional intentions. So, for example, our Schumann editor Kazuko Ozawa stipulates restraint, maintaining that Schumann’s placement of apostrophes and commas, frequently altered with respect to the text models, should be retained. Even an outdated spelling of a word that sounds otherwise – such as, for example, “hieher” instead of “hierher” in “Wanderlied” from the Kerner Lieder op. 35 – would then obviously not be modernised, as this would indeed preclude Schumann’s idea of sound.

We at Henle have always done well in our Schumann albums with this guideline: From the Dichterliebe via Frauenliebe und Leben (as Schumann’s writing differs from the Chamisso model!) and the two Liederkreise opp. 24 and 39 up to the Kerner Lieder. But in the most recently-published Myrthen we suddenly faced a problem: that is, concerning the letter “h” in Schumann’s musical setting of the “Räthsel”. The “Riddle about the letter h”, erroneously attributed earlier to Lord Byron, came from Catherine Maria Fanshaw and was sympathetically translated into German by Friedrich Ludwig Kannegießer.

Kannegießer’s first lines contain the word “Fluth” (“Flut” in modern German): “Und kommt es zur Fluth, so wird es stumm“ [And if it comes to a flood, it becomes mute]. Even if it is not heard, the original “th” in “Fluth” must of course be preserved, so that the point of the text is understood  – and not only the text: the sophisticated musical references in the lied – set, of course, in the key of B [“H” in German] major – are also only thus disclosed.

In the end, Schumann even goes his own way entirely in musical invention, transforming the original poem’s conclusion (“Im Schatten birgt sich’s, im Blümchen auch; / Du hauchst es täglich, es ist nur ein Hauch.” [It hides itself in the shadow, in the little flower too, / You breathe it daily, it is only a breath]) into a question that is answered purely musically: 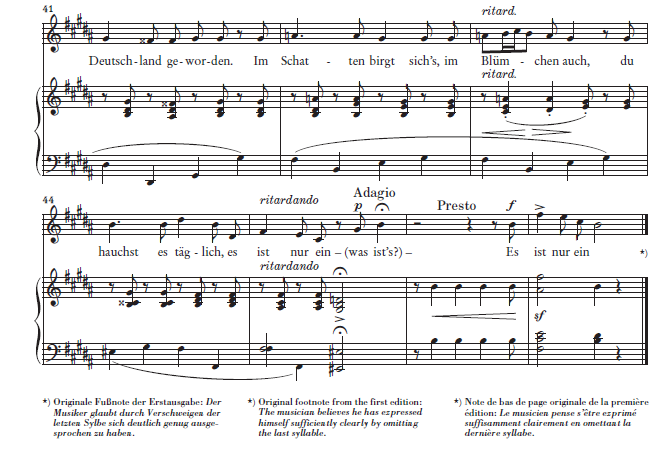 Excerpt from Myrthen, No. 16, Urtext edition
(click to enlarge)

We have therefore decided to adopt the lied’s original orthography as an exception and hope that even a modern Urtext edition can handle this small anachronism.

2 Responses to »Bordering on the modern – The Urtext edition of Schumann’s “Myrthen” op. 25«